Richard Bright: Can you say something about cellular neuroscience and how this relates to your current research?

Amanpreet Badhwar: I have always been driven to explore the various scales of cellular neuroscience. It’s like being on a magic carpet ride of the neuroverse, with the option of stopping and pondering for a while, discovering new ground, and returning to old haunts with greater appreciation and deeper insights. My graduate research career actually started at the level of the DNA, the building blocks of all cells. As an M.Sc. student, I investigated DNA instability in the primate centromeric region, the area that joins each half of the chromosome. The topic was of interest to me since chromosomal instability can promote neurodegeneration.

It was only during my Ph.D. that I started investigating the cellular composition of the brain underlying the changes we can see on brain imaging (in particular magnetic resonance imaging or MRI). Fortunately for us, the healthy brain is plastic, and can locally increase and decrease in size with new experiences. I wanted to gain a better understanding of how different brain cells types contribute to this plasticity, i.e. brain cells of neuronal, glial and vascular origin. In my current research I use my knowledge of the cellular underpinnings of brain function to uncover novel early biomarkers of neurodegeneration in age-related dementias. 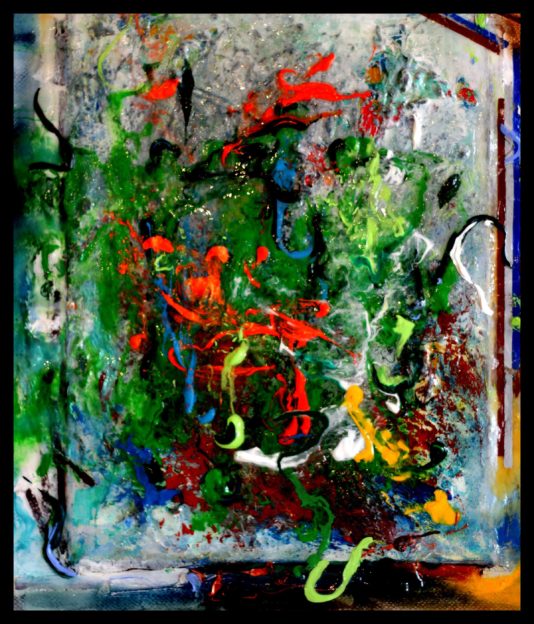 Pensieve: “I use the Pensieve. One simply siphons the excess thoughts from one’s mind, pours them into the basin, and examines them at one’s leisure. It becomes easier to spot patterns and links, you understand, when they are in this form.” – Dumbledore, from Harry Potter. To me those whimsical and rather intangible entities that we call thoughts are the processed products of multiple scales of information: our DNA, our cellular organelles, our brain cells, and finally the various brain networks. What I may call, worlds within worlds! 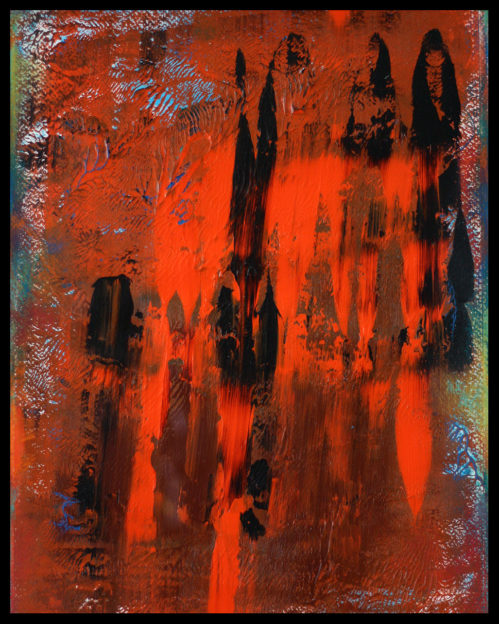 Three Sisters: “People will forget all about us, they’ll forget what we looked like and what our voices sounded like and how many of us there were” says Olga, one of the three sisters in the play Three Sisters by Anton Chekhov. Maybe, or maybe the memories of our female ancestors transcend time as mitochondrial DNA that we inherit from our mothers, or withstand time, like the many rock formations bearing that name. 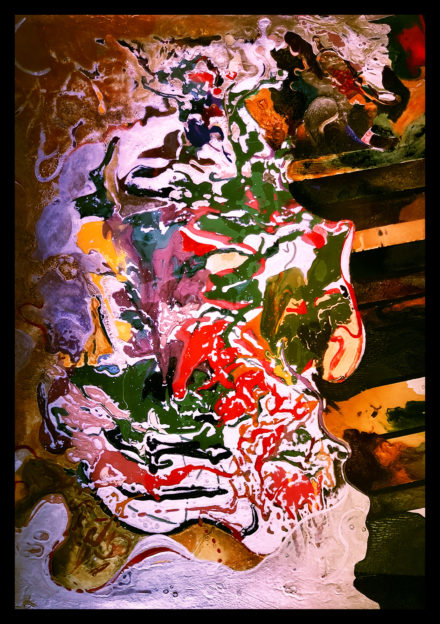 Cisternae: Cisternae are an intricate network of flattened tube-like structures that makes up the neuronal endoplasmic reticulum. Crucial to the trafficking of neurotransmitter receptors, the cisternae are implicated in synaptic plasticity and pathology. 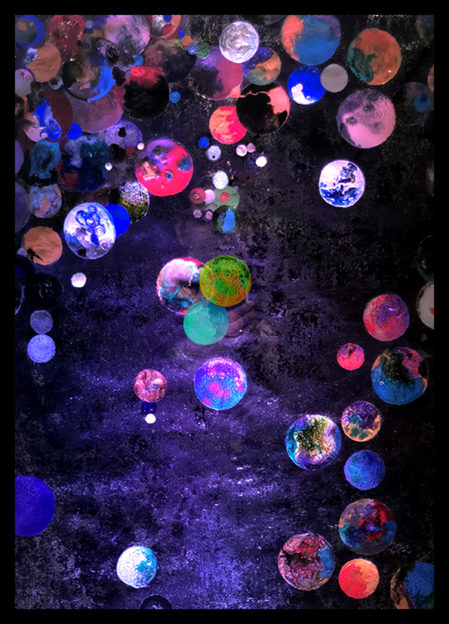 Agar: The ability to produce in vitro cultures of neuronal cells, most commonly on agar plates, has been fundamental to advancing our understanding of the brain. Often connected via computer to a real or simulated robotic component, cultured neuronal networks allow researchers to observe neuronal activity from several vantage points.

RB: In the late 19th and early 20th centuries, Ramon Y Cajal adapted and created techniques in microscopy and histology to visualize the fine structure of cells in the nervous system. How have today’s neuroimaging techniques progressed this visualization? How has this progress in visualization informed your own art practice?

AB: Modern cellular imaging techniques have come a long way since Ramon Y Cajal and, at present, even a single atom can be visualized. We have at our fingertips technologies like fluorescent tags, polarized filters and powerful computers to view and analyze the nervous system in exquisite detail. These techniques inform and augment brain images captured by computed tomography (CT), positron emission tomography (PET), and MRI that are usually captured in vivo at lower resolutions. 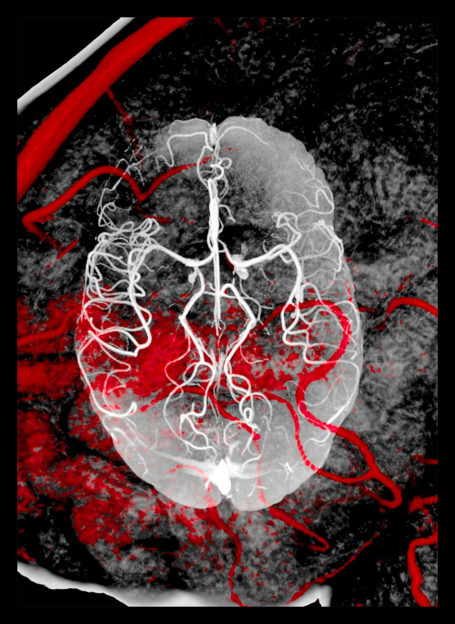 The Red Streak: A stylized version of brain arteries, in particular, the circle of Willis. Proper blood flow in the brain is crucial for healthy brain connectivity. The raw image, a time of flight angiography acquired on a 7 Tesla MRI scanner, was provided by Jonathan Lau and Ali Khan as part of a project on brain vasculature during Organization of Human Brain Mapping Brainhack 2017.

While I am tremendously inspired by the micro and even nano scale details of today’s visualization techniques, I am still somehow drawn in by Ramon Y Cajal’s drawings. To me they are evocative, and remind me of the days when the pen was a symbol of power. The pen could be wielded with the finesse of any musical instrument, or perform its own battle dance like a sword. These days I have replaced that childhood pen by a computer keyboard, but each time I pick up my paint brush, I am transported to the era of Ramon Y Cajal. I consider myself lucky to be able to combine the multi-scale visualization provided by today’s technology with the very physical and emotional task of painting.

RB: Can you say something about your artwork Crossings?

AB: On the surface, my painting Crossings alludes to the right and left hemispheres of the brain, and the connections between them. The painting also draws inspirations from drawings of glial cells by Ramon Y Cajal. These cells help maintain homeostasis, provide support and protection for neurons, and enhance the speed of communication between neurons.

On a personal level, the painting alludes to my own experience of leaving my birth country, India, and crossing oceans to start a new life in Canada. Despite the ever growing spirit of globalization, the two countries still have their own unique beat, culture, and color consciousness (e.g. the vibrant colors of Indian silks, and the sparking blue-white of the fresh Canadian snow). As I built a life in Canada, I had to find my own “glial cells”, i.e. routines and people who would help me maintain some sense of homeostasis in a foreign landscape. In this sense, Crossings strongly reflect the sentiment shared by the writer Jhumpa Lahiri. 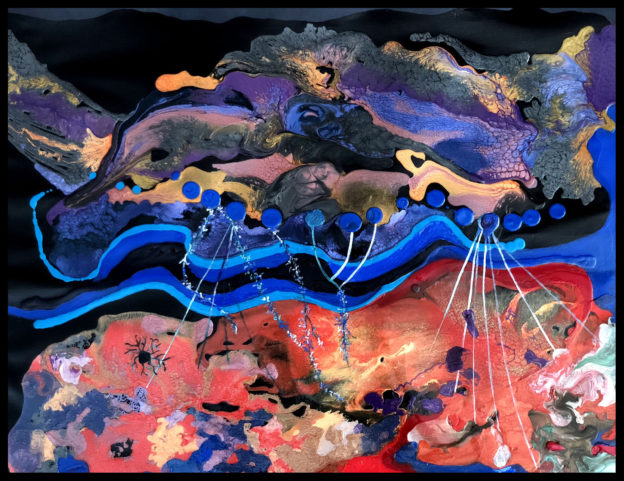 “From the beginnings of literature, poets and writers have based their narratives on crossing borders, on wandering, on exile, on encounters beyond the familiar. The stranger is an archetype in epic poetry, in novels. The tension between alienation and assimilation has always been a basic theme.” – Jhumpa Lahiri

AB: While my artworks are rooted in scientific knowledge, they are not overtly illustrative in nature. I reserve such illustrations for my scientific papers. Instead, I like to release the viewer from the constraint of viewing the painting from a static plane, and hope that they would delve through the various layers. At first glance, I want the viewer to feel, and potentially to gain some sort of intuitive understanding of the scientific topic, i.e. to have a gut feeling about it. I guess I want all my viewers to get personal with science, even though society likes to categorize individuals as scientists and non-scientists. According to Carl Sagan, we are all born scientists, wide-eyed, full of wonder and curiosity for the natural world, and a thirst for the unknown.

In fact, what I find most gratifying at a vernissage is people sharing their interpretation of the science behind my artworks. Often they bring up concepts that I had not even consciously incorporated in my works, but, sure enough, have somehow found their way into the paintings. To discover one’s own artwork all over again is exhilarating. Most of all, I want my artworks to ignite their imaginations. As J. K. Rowling put it so eloquently, “Imagination … in its arguably most transformative and revelatory capacity, it is the power that enables us to empathize with humans whose experiences we have never shared.”

RB: Your art practice is obviously informed by your neuroscience research. In creating your artwork, what takes priority, the art object or the scientific data?

AB: They are extensions of each other, and play off each other. Much like yin and yang, the artistic and scientific elements of my pieces complement each other and form a whole, greater than the constituent parts. Of course, there are elements in each art piece where the tension is palpable, and there are regions where the artistic and scientific endeavours present a united and soothing respite to the eye.

RB: In your view, what are the lines that connect art and neuroscience?

AB: Creativity and imagination are the lines that connect art and science. David Hume’s in his A Treatise on Human Nature states that “the imagination seems to be unrestrained, but actually all complex ideas are derived from simple impressions, by compounding (putting together), transposing, augmenting or diminishing mental materials derived from experience (senses or feelings).” In both art and science, creative people are able to see patterns and connections that just seem obvious to them, whereas others need a little help to see. There is, of course, the neuroscience of art, where researchers seek to tease out the brain features that characterize artists, as a means to understand how the brain achieves such complex and nuanced outward expressions, and how disruption of brain networks alters these expressions. On the other hand, there is art based on neuroscience, such as mine and others in this issue, that provide an alternate view of scientific concepts. These bi-directional connections strengthen both art and neuroscience. 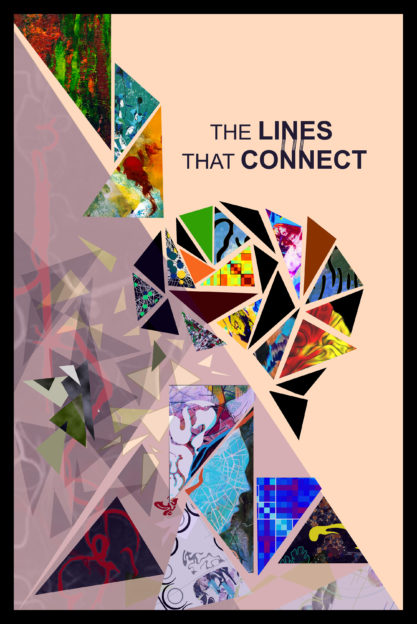 The Lines That Connect: There are a multitude of lines that link art and neuroscience. As far as I am concerned, the possibilities are endless, and have already embarked on my next sciart project.

I am currently a postdoctoral fellow at the Institut universitaire de gériatrie de Montréal, and continue to work on Alzheimer’s disease (AD) and related dementias. My research combines structural and functional imaging with clinical and genetic assessments to relate variations in brain connectivity to clinical status, and to develop early markers of AD pathology. Late-onset, sporadic AD is a complex and heterogeneous disorder with a number of underlying pathologies contributing to symptoms. However, AD has generally been studied in silos, with individual laboratories focusing on specific aspects of the pathology. Holistic, multimodal approaches that are sensitive to the multiple dementing pathologies as well as the concurrent mechanisms of brain aging are needed to understand AD. I hope to make distinct contributions to the study of AD by applying “big data” methods to integrate observations from multi-modal, large-scale datasets such as in-vivo brain imaging and ‘omics’ (genomics, proteomics, metabolomics). View all posts with Amanpreet Badhwar →

The Lines that Connect
Issue | December 2018