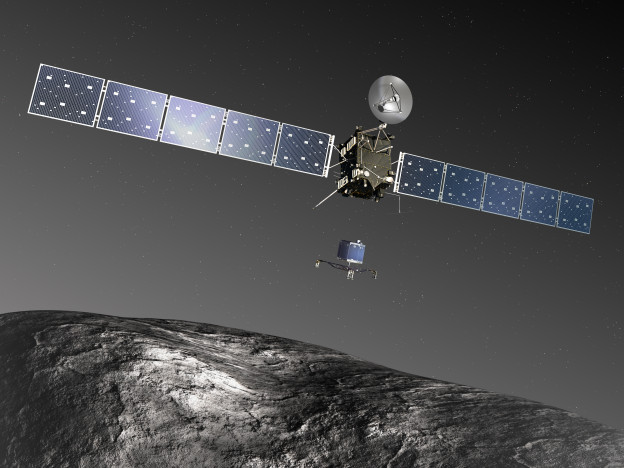 At 16.05 GMT on Wednesday the 12th November 2014 a small probe touched the face of rock hurtling through space at 135,000 km (84,000 mi) per hour. After chasing 67/P Churyumov-Gerasimenko, Philae, with help from Rosetta, finally created a truly momentous timein the history of humankind.

Approved in November 1993, as a Cornerstone Mission in ESA’s first long-term science programme, the mission was named after the Rosetta Stone, a slab of volcanic basalt found near the Egyptian town of Rashid (Rosetta) in 1799. The Rosetta Stone provided the key to an ancient civilisation and revolutionised our understanding of the past. By comparing the three carved inscriptions on the stone (written in two forms of Egyptian and Greek), historians were able to decipher the mysterious hieroglyphics – the written language of ancient Egypt. As a result of this breakthrough, scholars were able to piece together the history of a lost culture. ESA’s Rosetta Mission will allow scientists to unlock the mysteries of the oldest building blocks of our Solar System: comets. 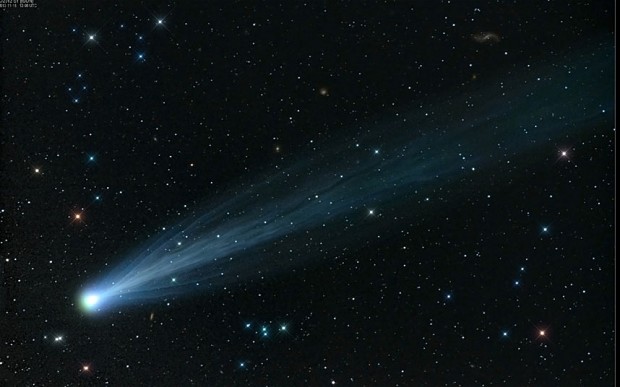 Comet 67P/Churyumov-Gerasimenko orbits the Sun once every 6.6 years, looping around the Sun between the orbits of Jupiter and Earth, between about 800 million and 186 million kilometres from the Sun. This makes it a short-period comet. Ground-based telescopes have observed 67P/Churyumov-Gerasimenko during almost all its appearances since its discovery in 1969. Named after its discoverers, Klim Churyumov and Svetlana Gerasimenko, astronomers from Kiev, the comet was “spotted” for the first time in 1969 on a photographic plate. The ‘P’ identifies short-period comets with a well-established orbit around the Sun and that take less than 200 years to complete a solar revolution. The number 67 refers to Churyumov-Gerasimenko’s position in the list of catalogued periodic comets. The most famous, Halley, is designated 1P.

In order to acquire as much information as possible about Rosetta’s target comet, ESA implemented a rigorous ground and space-based observation programme of 67P/Churyumov-Gerasimenko. These observations provided a fairly reliable estimate of the comet’s size – about 4 kilometres in diameter.

Rendezvousing with the comet required travelling a cumulative distance of over 6.4 billion kilometres. As no launcher was capable of directly injecting Rosetta into such an orbit, gravity assists were needed from four planetary flybys – one of Mars (2007) and three of Earth (2005, 2007 and 2009). 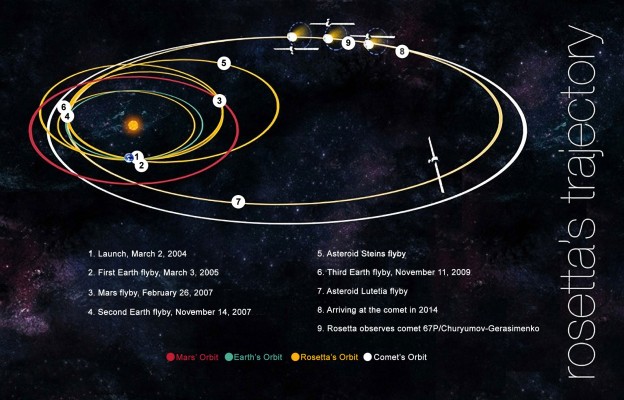 Rosetta’s prime objective is to help understand the origin and evolution of the Solar System. The comet’s composition reflects the composition of the pre-solar nebula out of which the Sun and the planets of the Solar System formed, more than 4.6 billion years ago. There is also convincing evidence that comets played a key role in the evolution of the planets. Cometary impacts are known to have been much more common in the early Solar System than today. Comets, for example, probably brought much of the water in today’s oceans. They could even have provided the complex organic molecules that may have played a crucial role in the evolution of life on Earth.

Rosetta will investigate this by analysing the isotopic abundances in the cometary ices. The isotopes of a certain chemical element are atoms of the same kind that differ slightly in weight. Deuterium, for example, is an isotope of hydrogen; it is also heavier than hydrogen. All the deuterium and hydrogen in the Universe was made just after the Big Bang, about 13.7 billion years ago, fixing the overall ratio between the two kinds of atoms. However, the ratio seen in water can vary from location to location. The chemical reactions involved in making ice in space lead to a higher or lower chance of a deuterium atom replacing one of the two hydrogen atoms in a water molecule, depending on the particular environmental conditions. Thus, by comparing the deuterium to hydrogen ratio found in the water in Earth’s oceans with that in extraterrestrial objects, we can try to identify the origin of Earth’s water. For example, if the hydrogen-deuterium ratio in the ocean water is similar to that in the cometary ice, it will support the theory that a fraction of the Earth’s water has its origin in space. ESA’s Herschel mission has already found a very similar deuterium-to-hydrogen ratio in comet Hartley-2. (http://www.esa.int/Our_Activities/Space_Science/Rosetta/Frequently_asked_questions )

Rosetta is operated from the ground as it was impossible to programme manoeuvres for the whole mission before the launch because this would have entailed adjustments at each stage of the journey. Ground commands were sent periodically to readjust the spacecraft’s trajectory. These took up to 50 minutes to reach the spacecraft, when it is farthest from the Earth. To compensate for the delay, Rosetta was provided with built-in intelligence to look after itself. This is done by its on-board computers, whose tasks include data management and attitude and orbit control. 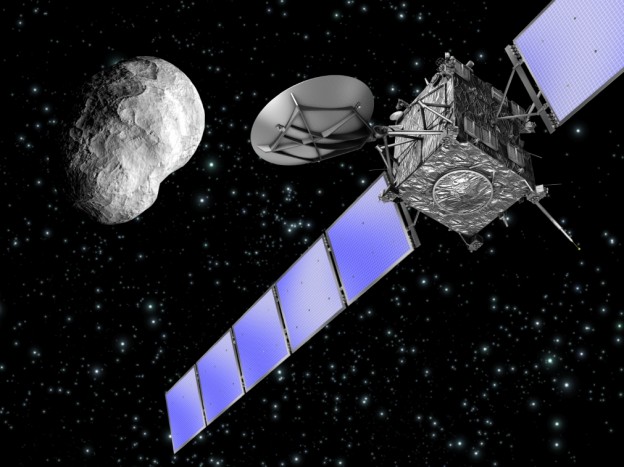 The lander separated from the orbiter at 9:03am GMT and was expected to touch down on Comet 67P/Churyumov–Gerasimenko seven hours later. It was going to be a long wait. 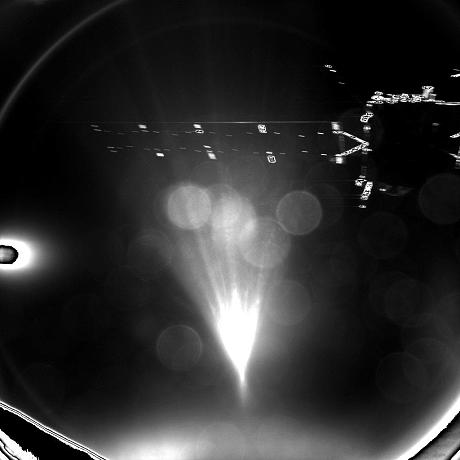 At 15.00 Rosetta waves goodbye to Philae as it descends on to the surface of the comet.

15.30 Philae should be landing around about now. But there is a 28 minute delay in getting a signal back to Earth.

“We’re down on the surface”, said Professor Mark McCaughrean from the European Space Agency when Philae sent back a signal that it had landed on a moving comet.

“Buses don’t run that well”, he added, when the manoeuvre was confirmed within two minutes of its expected arrival. 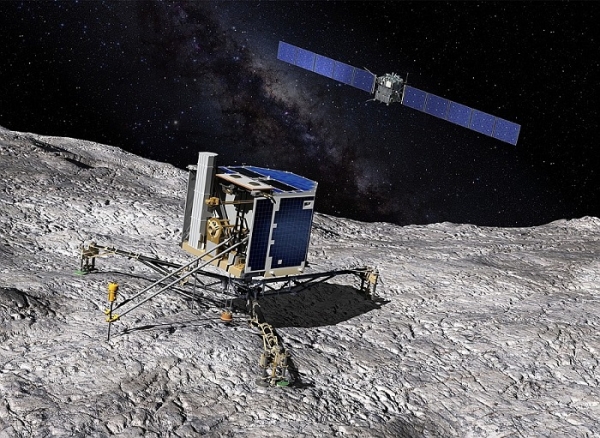 “After more than 10 years travelling through space, we’re now making the best ever scientific analysis of one of the oldest remnants of our Solar System. Decades of preparation have paved the way for today’s success, ensuring that Rosetta continues to be a game-changer in cometary science and space exploration.”

“ESA and its Rosetta mission partners achieved something extraordinary today. Our ambitious Rosetta mission has secured another place in the history books: not only is it the first to rendezvous with and orbit a comet, but it is now also the first to deliver a probe to a comet’s surface”.

Not long after, a web news item came through –

The Rosetta mission has detected a mysterious signal coming from Comet 67P/Churyumov-Gerasimenko.

Then, at 19.10 It appeared that the Philae lander had bounced when it hit the comet and lifted off once more, before settling somewhere away from original touchdown site. Scientists lost the radio link because the probe is now below the horizon and will not be contactable until the following morning.

“It’s complicated to land on a comet. It’s also complicated to understand what has happened during he landing. What we know that we touched down and we landed on the comet. We had a very clear signal and we also recieved data from the lander. That is the very good news

The not so good news is that the anchoring harpoons did not fire. So the lander is not anchored to the surface. Did we just land in a soft-sand box and everything is fine? Or is there something else happening. We still do not fully understand what has happened.

Some of the data indicated that the lander may have lifted off again. It touched down and was rebouncing. We saw data on the solar generator which could be interpretre that the lander lifeted off and started to turn itself. About two hours later this information of turning stopped. So maybe today, we didn’t just land, we landed twice.”

It was going to be a long night.

10.15 The first picture of Philae on the comet. Well its feet at least. The image demonstrates just how precarious the landing was. The probe seems to be sitting just feet away from a dangerously rocky outcrop or boulder. Although the scale is unclear, it shows how inhospitable comet 67P/Churyumov-Gerasimenko actually is. Just a few feet to the right and it could have toppled over. 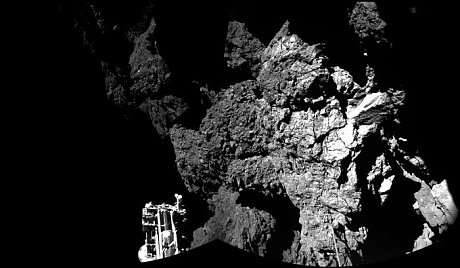 As Philae continues its stay on the comet, we continue our contemplation of outer space and our place within it.

Further and latest information can be found at

Here are the key facts and figures behind the touchdown: