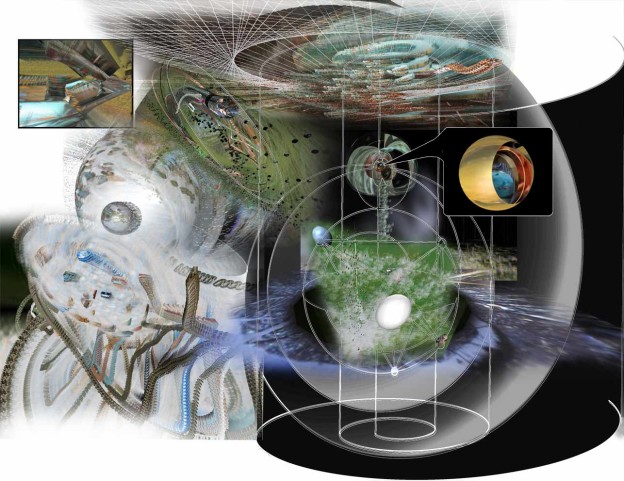 I came across Willy Le Maitre’s work a while back and particularly stimulated by his extraordinary video piece, Edia, a screen based presentation depicting a cosmology of digital space. Here space is neither interior or exterior, but infinite and creative, a metaphysics of interior human space as an exploded view of the self. Self no longer confined to an individualist notion. Here is what he says of the work –

“The work details the notion of a distributed self; distinguishing an individual’s body from its counterpart, the dividual. The dividual extends the self into a mesh of relations, communications and emotings. Within Edia’s nested structures, a self is shown as a constellation of points distributed around the globe. The points are personified by ‘friends’ in dialog. The entity’s interconnected points on the network form an analogous structure in our own bodies. Edia’s molecular constitution is bonded by audiovisual channels that are both its memory and links to the possible in sequences of event. Its amalgamations of inter subjective perspective visualize reality as an artifact of communication.

Video recordings appear as memories of the seen. The spheres are seen from both outside and in. From outside; the video coated spheres are perspective objects that connect with others in ersatz molecular formations. From within; the surface is continuous, providing an immersive enclosure for memory and revery spaces. These spaces evoke the unique worlds of the friends in the artists network of Emotives.

The work describes a new topology of space that the network has produced within us. 3D visualizations are used as optical explorations depicting the abstract concepts of the rhizomatic in networks and databases and their play with the affective structures of human relations . Edia is a digital entity that occupies a ‘space’ that supports our physical space. Edia is comprised of RGB pixels and computed values that are described and depicted as a cosmology of digital space.”

And here are excerpts from Edia. Although it’s to be viewed as stereographic media presentation, it still has a wonderful power and beauty viewed like this (but if you have the glasses, wear them and be further amazed!)

00:00 Edia is enfolded in information space
00:50 it is an entity distributing the self in a constellation of points around the globe. The points are personified by ‘friends’ in dialog.
01:06 the basic unit of Edia is a spherical point. one begets another. from worlds come worlds, where none is prime.
01:51 all surfaces are covered in video.
02:08 video is bound by pixels: each possesses knowledge of the whole.
02:39 on the surface of the sphere the horizon is continuous.
03:44 the network connects all points.
03:51 our network makes us all visible to one another — with horizon collapsed, we live inside.
04:20 within the point, space is imagined as occupying the center — the perspective of the network.
05:29 the point emerges from an ellipse into a cylindrical passage. A network byway that connects hole to whole.
06:30 perspective is established by the eye.
07:20 The eye acts as both witness and writer, encoding the seen into memories that are seeded into the cloud below it.
08:10 Edia is comprised of a network of emotives. The network has a molecular quality, its bonds of audiovisual sequences play in the emotives nodes.
11:11 shells envelope one another, each, a dimension that influences the direction taken at the center.
11:40 at the center: direction of thought is decided. It is the result of a complex interaction of memory, desire and the emotivational.
13:01 Possibles and Incompossibles: forces of perception and imagination are stimulated. The actual materializes, overwriting the cascades of incompossibles.
14:40 while an individual is situated in a single body, its counterpart, the dividual, is distributed to multiple bodies through communication, emotings and associations.
16:04 frequency’s value produces character that is attributed to matter
19:04 the Surrounds constitute an ambient system of influencing. An ecliptic of institutions in orbit around us, a cycling of effects. Each of us its subject and each subject to one another.
20:45 the Surrounds boundary is a shell, beyond which, the appearances of pasts and futures, take the shape of here and now.

Willy Le Maitre’s work is featured in public galleries across Canada and in New York at The New Museum, The Kitchen, Canada Gallery, CCS Bard Galleries, Bitforms and the Baryshnikov Art Centre. It has garnered international acclaim including awards from Vida, Spain and the Telefilm prize at Images Festival in Toronto, Canada. His work with Eric Rosenzveig co-produced pioneering generative and networked artworks such as The Appearance Machine and the Fleabotic Hypermedia Nonet. He has served as faculty at the Banff Centre for the Arts. During the past several years he has developed a body of Stereo 3D artwork in the form of videos, installations, live video performances and lenticular photographs. Currently, the work investigates the interplay of images experienced through eye sight with those that occur in recollection and day dreaming.