“It is not down on any map; true places never are.” ~ Herman Melville

Maps are flat; the earth is round. This essential conundrum has bedeviled mapmakers since Ptolemy. How to wrestle the complexities of the three-dimensional world to the two-dimensional mat of the map? Mercator gave a valiant try and his cylindrical projection has withstood the test of time despite vast distortions of landmasses at the poles because a line drawn on his map is a true direction. Charting a course, plotting a line, voyaging from point A to B, sailors traverse the world. Goods move, people travel, knowledge expands; the world grows larger, then contracts, at once vast and infinitesimal.

Where are we? How do we get there? Is there another way? Questioning the existential to arrive at the concrete, confronting the abstract to embrace the dimensional, we map it out—in life as in art.

Shannon Rankin (b.1971) is an artist who uses the language of maps to explore the complexities and interconnections between the inner and outer worlds, between that which is known and that which remains beyond the field of knowledge, that mythical place on medieval maps where the dragons lie and cherubs blow the wind. The duality of our human capacity for imagination and reason, for creation and destruction, for being of nature and apart from it, is a rhumb line that courses through her work. 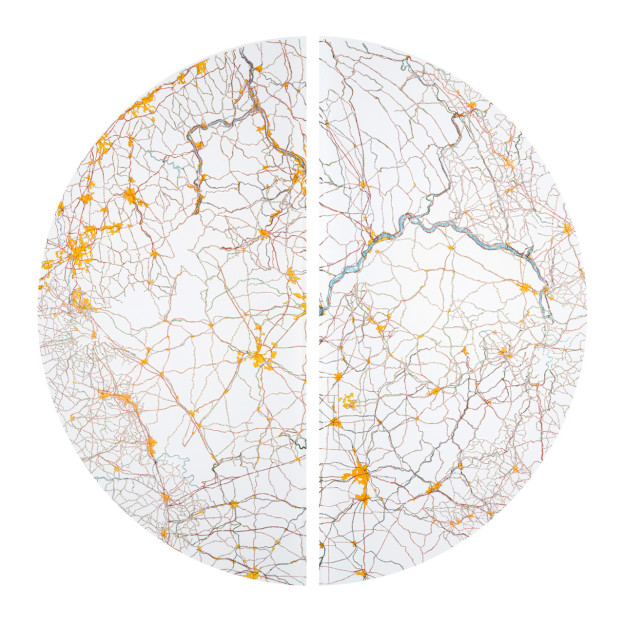 Using maps as both material and metaphor, Rankin creates installations, collages and sculptures that play on the parallels and connections found among geological and biological processes, patterns in nature, geometry and anatomy. For instance, Synapse | Diptych, a relatively large two-part piece from 2011, presents a flat circle composed of a web of delicately cut-out red roadways connecting variously shaped bright yellow population centers, the whole sliced down the center to create symmetrically sized halves, the same yet different. The right half has a wide blue river snaking through it, the left has a pronounced branching highway. The title and the divided composition make apparent the analogy to the human nervous system and the cerebral hemispheres—the right and left-brain. Another more macro reading suggests a satellite image of the Earth at night, with the bright lights of city centers illuminated and connected by the electrical grid.

“Maps,” says Rankin, “are everyday metaphors that speak to the fragile and transitory state of our lives and our surroundings. Rivers shift their course, glaciers melt, volcanoes erupt; boundaries change both physically and politically. The only constant is change.” 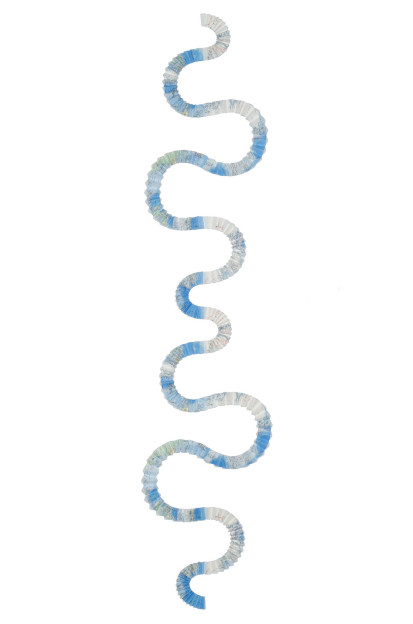 Course, another work from 2011, takes the form of a meandering soft blue line created from cut and folded polar maps. Presented vertically on the wall, it flows circuitously downward, its accordion pleats compressing glacial time, slowing but not halting the implied melting. 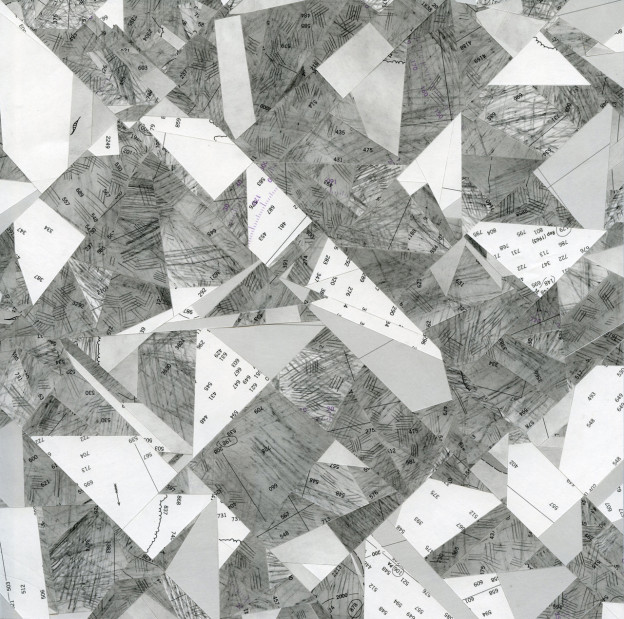 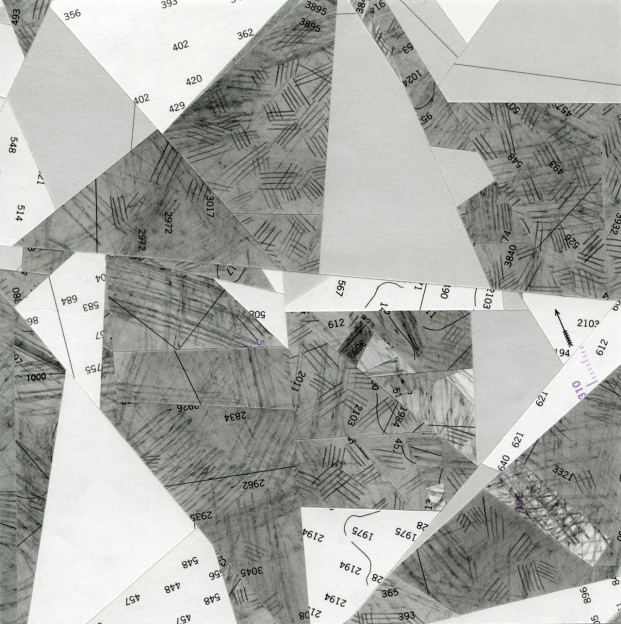 A recent series of collages, Compression 1, 2 and 3, 2016, picks up a similar theme. All are made from reassembled nautical charts of the arctic, sharply cut, sometimes overdrawn in graphite, the multi-layered triangular forms shift under and over each other, referencing the process of the warming and cooling of the polar ice sheets. That they are somberly toned in shades of grey, white and black reinforces their elegiac quality. 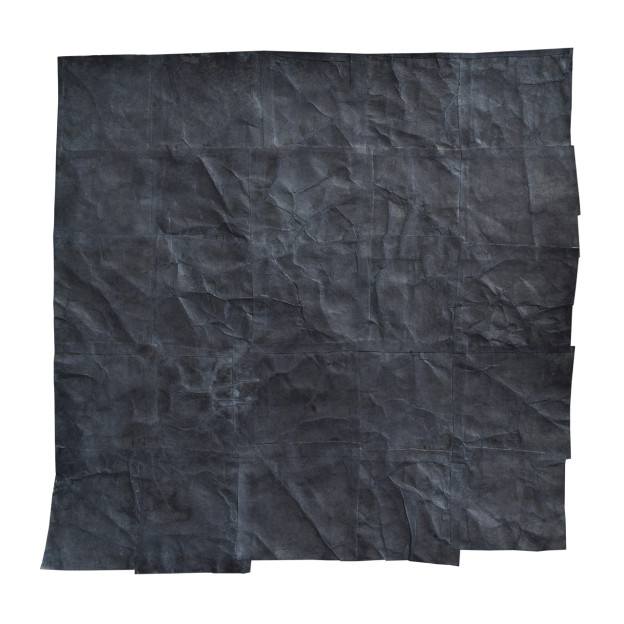 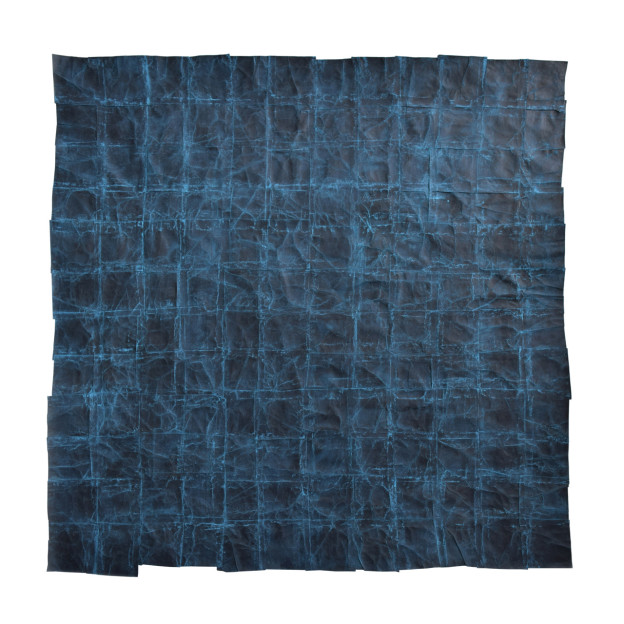 Plate 1 and Plate 2, are two other recent works by Rankin that continue the theme of environmental harm. Plate 1 is made from ink and graphite on collaged ocean maps and is one of her most abstract and solemn works. A mere 7 x 7 inches, its impact is larger than its scale. The heavily wrinkled and abraded surface is entirely covered in graphite and black ink, producing a sheen and density akin to an oil slick, a mourning veil for a dying planet. Plate 2 is larger at 16 ¼ x 16 ¼ inches and the underlying geometric grid of the collaged map squares is visible beneath a deep sea-blue. The surface of work is a web of lines and texture, suggesting a net afloat in a turgid sea. Taken together, Plate 1 and Plate 2 are a powerful testament to the Earth’s fragility and its endurance. Can we rescue it from ourselves?

Time as a metaphor and a component of making is embedded in Rankin’s art. Her processes of creation and methods of installation are slow and meditative, involving careful painstaking cutting, the accumulation of many small repeated forms, and the meticulous pinning, stitching or pasting of pieces to form a whole. Sometimes an idea or method is revisited or is carried further in a series, but every work is unique and individual, every installation new to its time and place. 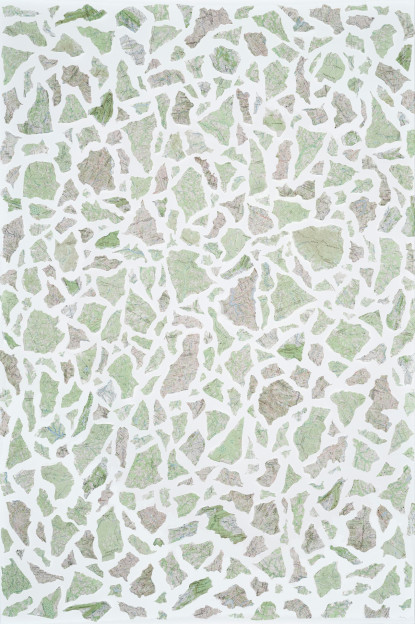 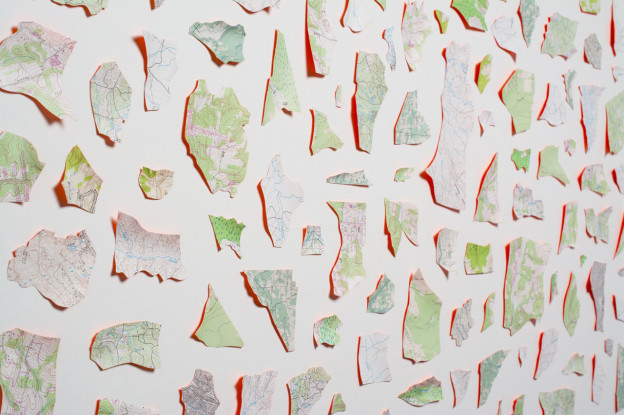 A comparison of Artifacts 1 and Artifacts 2, for example, is instructive for the changes that appear in the four-year interval between their makings. Artifacts, 2011, is made from water-soaked map fragments, torn and adhered to paper measuring 44 x 30 inches. Artifacts 2, 2015, is the same dimensions but presented horizontally. In this later work, the scattered shards of paper are undercoated by hot red orange acrylic, visible along their curled edges. The implications are clear, the world has turned a corner, the Earth is heating up, we are scattering our ashes.

Originally from California’s San Joaquin Valley, Rankin moved to Maine to attend the Maine College of Art in Portland, where she received a Bachelor’s of Fine Arts degree in 1997. A stint working in graphic design in San Francisco, where the work was almost entirely computer based, led her back to Maine to take a job as a pattern cutter for a fashion designer so she could again work with her hands. It was this experience that gave rise to the cutting and sewing techniques that she uses in her art. 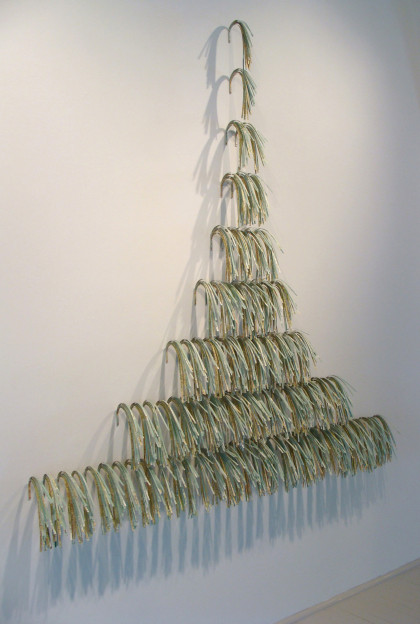 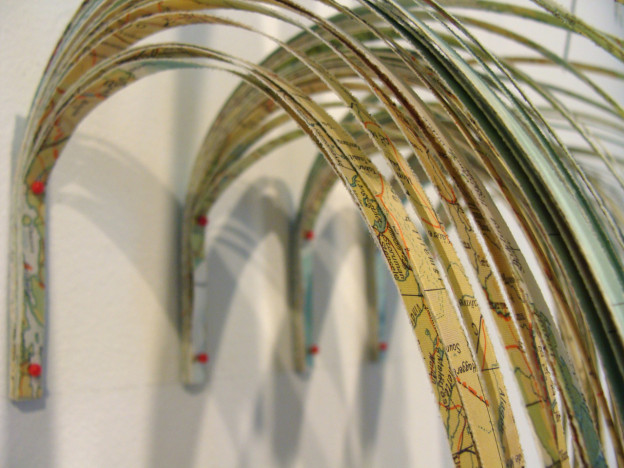 “I intricately cut, score, wrinkle, layer, fold, paint and pin maps to produce revised versions that often become more like the terrains they represent,” she says. A case in point is Falls, 2010, an installation created for the Center for Maine Contemporary Art Biennial (which won the Juror’s Prize), composed of hundreds of thin strips of maps, all cut to identical size and pinned in small bunches to the wall, forming the shape of a gently curved isosceles triangle. Each bundled tuft of cut strips bends downward in a graceful pour, taken as a whole they suggest a waterfall. In presenting Rankin with the Biennial award, juror Dennis Pinette writes, “She constructs a convincing deeply playful logic based on a formal understanding of pattern and geometry. Beyond the formal, her instincts propel her art to that rare zone of originality were unique abstract language is clearly defined.”

Rankin now lives in Rangeley, in western Maine’s lake district, surrounded by mountains. When asked recently by an interviewer, “Who is your role model or mentor (alive or dead)? She responded, “Does nature count?”

Lately Rankin has been consciously pushing herself to work outside her comfort zone, challenging herself to making art that is “nebulous, amorphous, ambiguous.” Since April 2016, she has been in Roswell, New Mexico, participating in the yearlong Roswell Artist-In-Residence Program. This “gift of time” has allowed her to take risks and experiment with new materials and methods of working, as well as to respond to a landscape vastly different than Maine.

“For a while now,” she says, “I have worked in a way that has been very controlled and precise. Often the compositions are based on underlying patterns or grids. That hasn’t changed for every series, but I am attempting to shake things up a bit more. Let go of some control. Explore chaos, the unplanned and mysterious.” 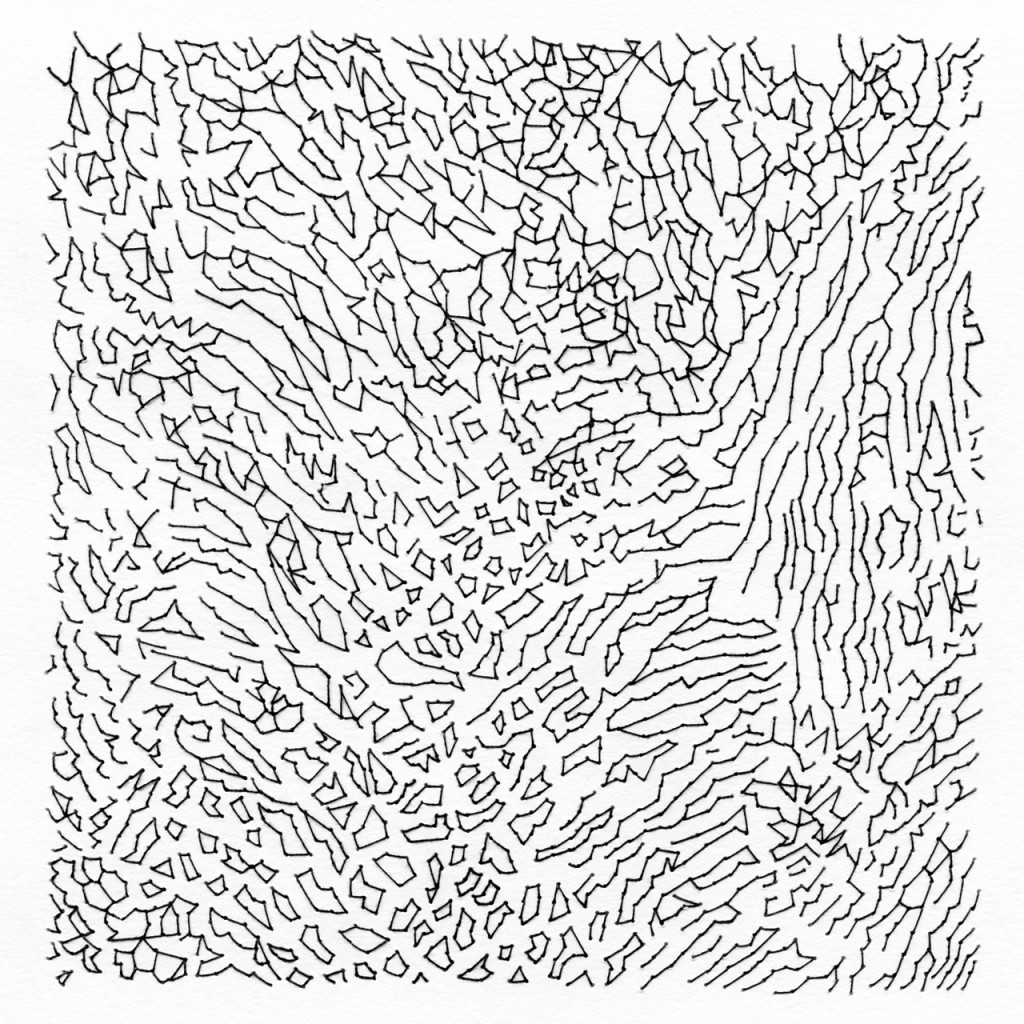 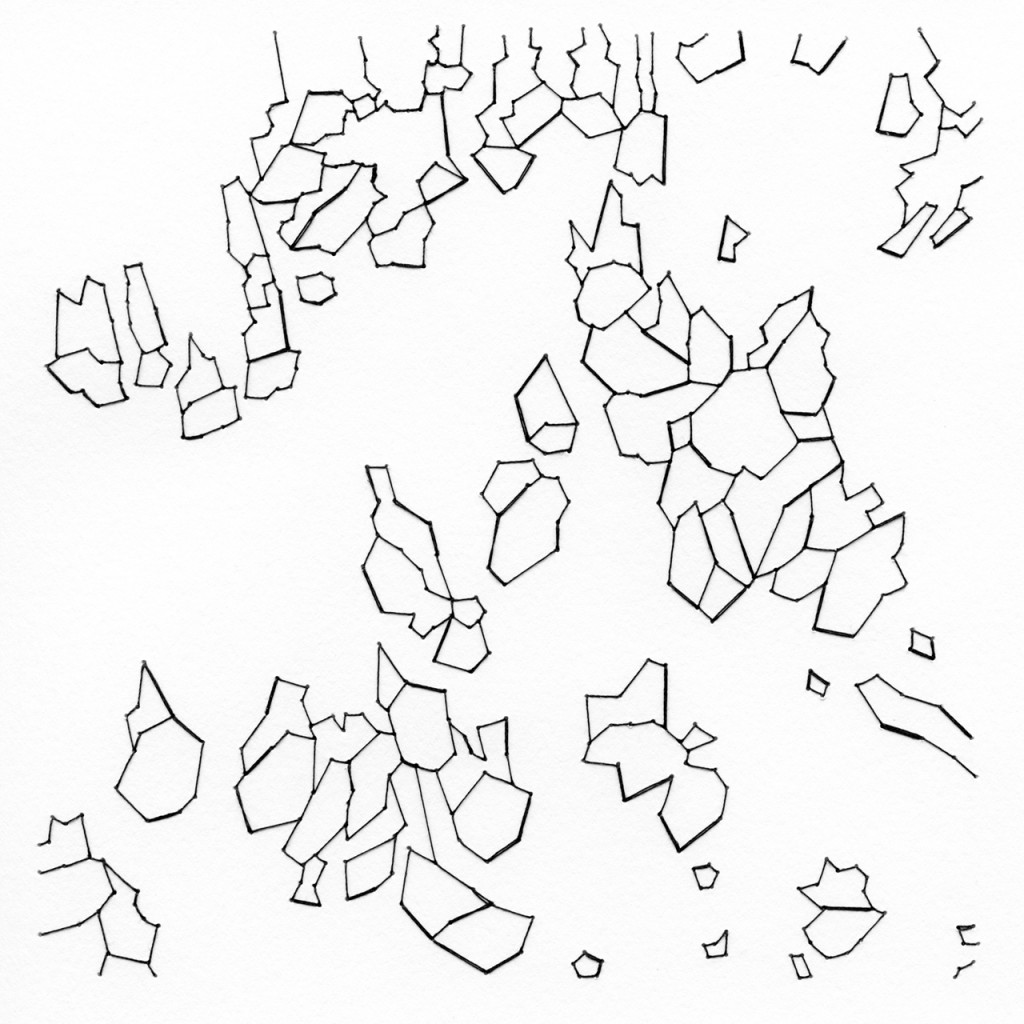 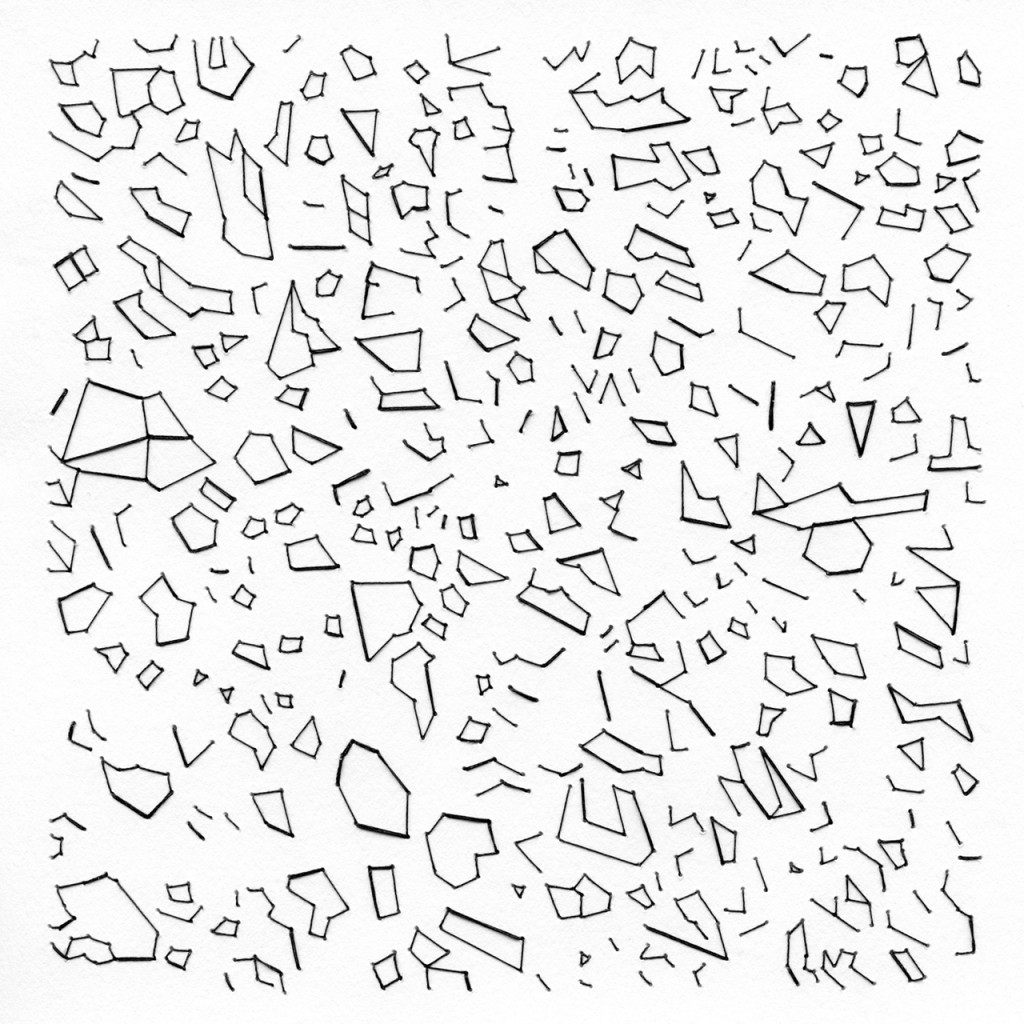 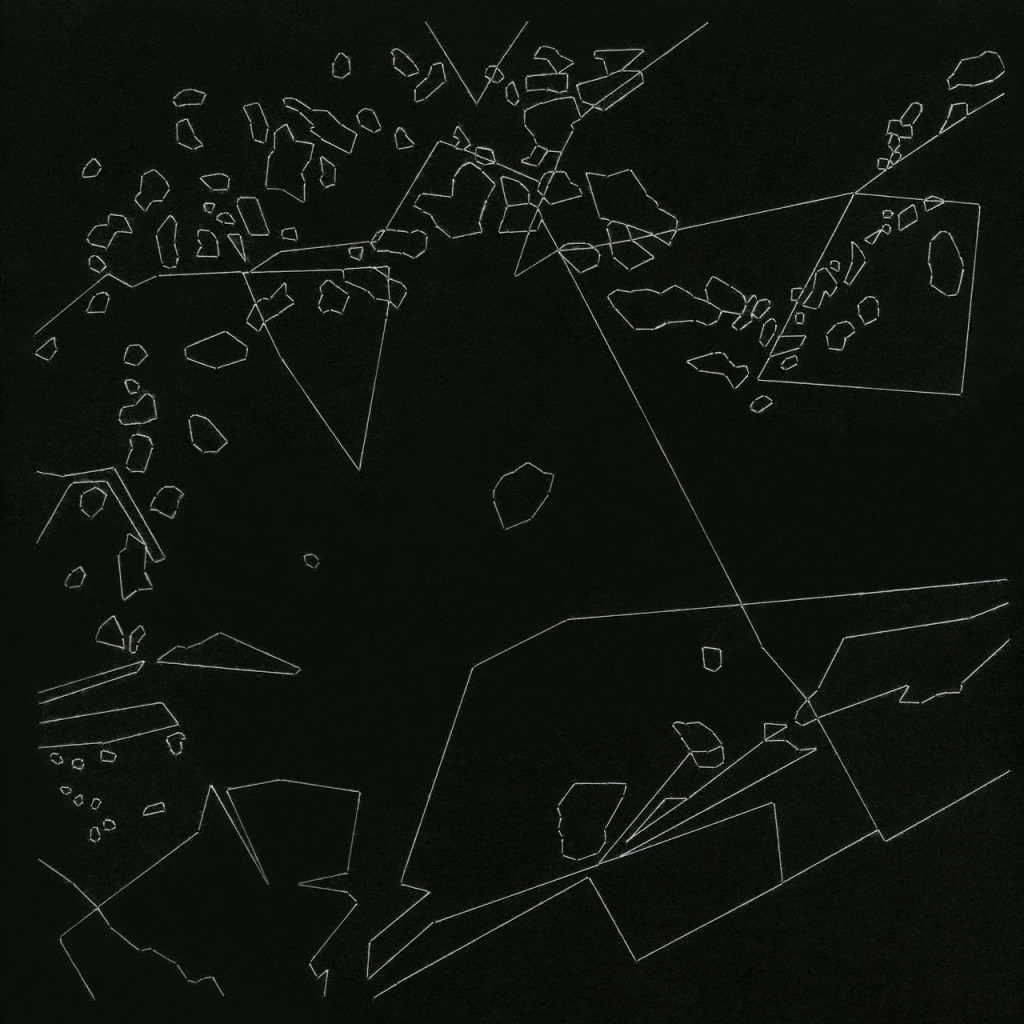 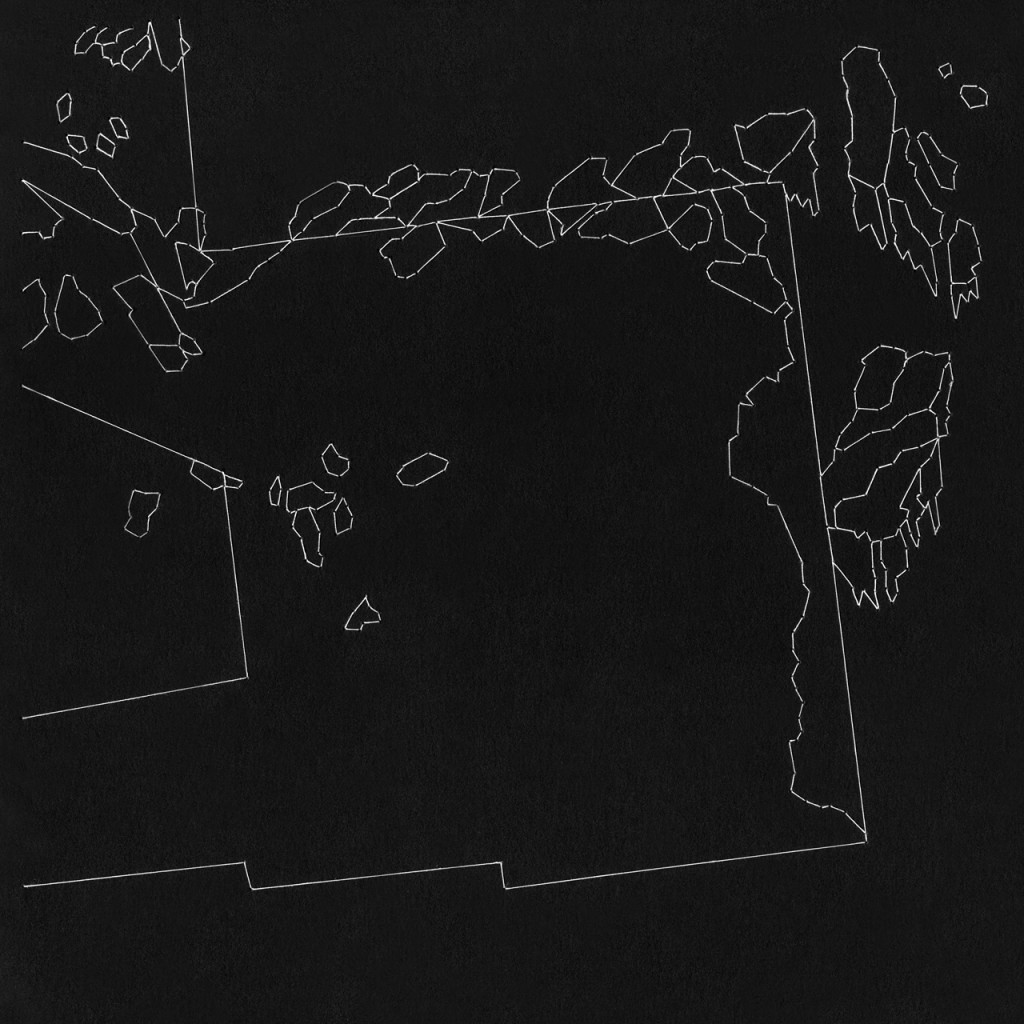 Earth Embroideries is a series she began before she left for New Mexico and has continued there, the work is becoming more abstract and more macro in viewpoint with each iteration. They are an obvious departure from her earlier work in that they are not created from the physical material of maps, instead she is distilling satellite views of the arctic into minimal line drawings created in thread on paper. She says, “I’m transcribing a vast amount of physical space into something I can hold and stitch by hand. In some of these I am also incorporating digital glitches which are visible when zooming in on Google Earth.” In a very real sense, the Earth Embroideries are about mending the world. 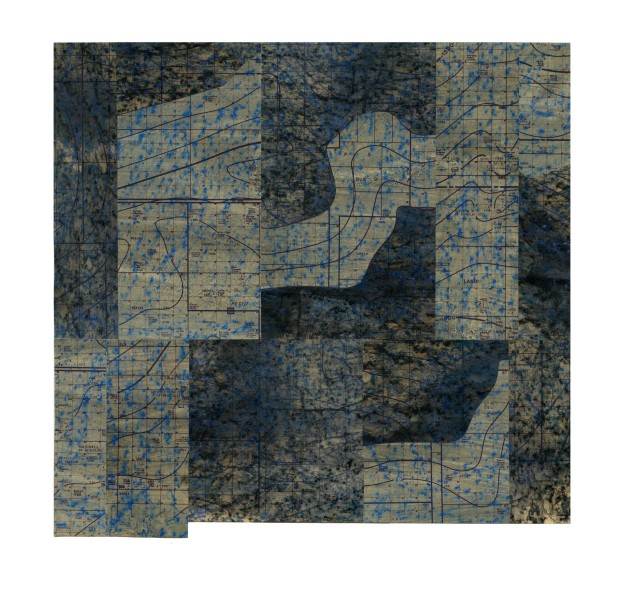 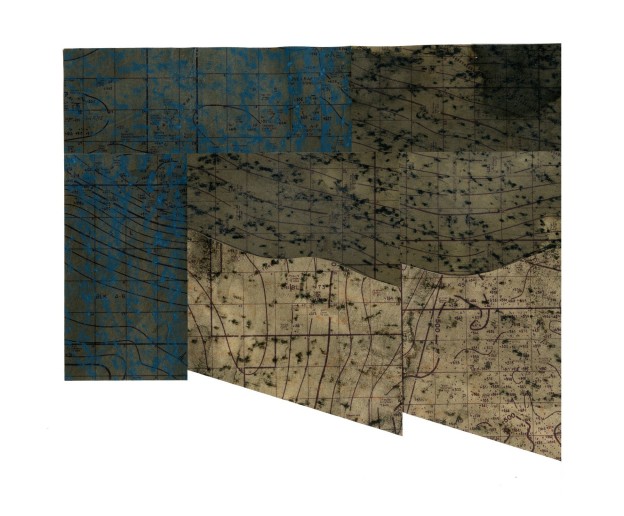 Unearthed, is another new series Rankin is exploring in Roswell. Inspired by the soil, sediment, light and texture of the New Mexican landscape, these richly patterned works are composed of cut and collaged maps hand-colored in jewel tones, mossy greens, and earthy browns. The compositions are loosely rectangular shapes with open irregular edges; they are her most painterly works to date. “I’ve always had this fantasy of being a painter,” she says, “but I’ve never really loved using paint. Instead, I’m using topographic maps, ink and pigmented graphite.” Haunting in their abstract beauty, the Unearthed collages collectively sound a Greek chorus to our frayed yet lovely planet.

In her most recent work, Rankin moves beyond the known into uncharted territory. She has been experimenting with creating landscapes out of soil, casting them in plaster, then using them to create press molds for ceramic forms that resemble fossils, moonscapes, or the surface of other planetary bodies. “I’m trying to squeeze, combine, merge and overlap the macro and micro,” she says. “I’m always looking in and looking out.”

A map is not the size of the earth its describes. Scale must be determined, as well as which features to include and which to leave out. You can’t include every tree in the forest; generalizations have to be made. Artists are familiar with these considerations and choices. A work of art is not the thing it describes, but something other.

“To put a city in a book, to put the world on one sheet of paper—maps are the most condensed humanized spaces of all,” writes Robert Harbison in his book Eccentric Spaces. “…they make the landscape fit indoors, make us masters of sights we can’t see and spaces we can’t cover.” Likewise with art.

All images copyright and courtesy of Shannon Rankin

It is republished in the Interalia Magazine with kind permission from Suzette McAvoy and Deanna Witman the managing editor of Hawk & Handsaw.

Suzette McAvoy has served as director and chief curator of the Center for Maine Contemporary Art since September 2010. She previously served as chief curator of the Farnsworth Art Museum and has lectured and written extensively on the art and artists of Maine. McAvoy received a B.A. in Art History from Hobart & William Smith Colleges and an M.A. in Museum Studies from the Cooperstown Graduate Program. She lives in Belfast, Maine.