I’ve always hated maps. I could never read them right. I always got lost using them. Don’t get me started on folding them correctly back to their original configuration. I grew up in the 80’s and 90’s so paper maps were it. You either had the rolled up maps which were great to have but bulky to use in a car, which is where I needed maps the most, or you had the folded maps. God forbid you fold the map back wrong. Tears forms, edges get frayed, and fuzzy bits of map paper spread all over the place, not to mention the interior monologue of my grandfather yelling at me with hands flailing in the air, “You’re folding it WRONG!” Even though I hated using them, I loved looking at them. I loved their compositions, the color schemes, and the different types of maps that all had their own way of saying the same things. Their utility wasn’t the important part but it was the language that got you to the utility that was important to me. 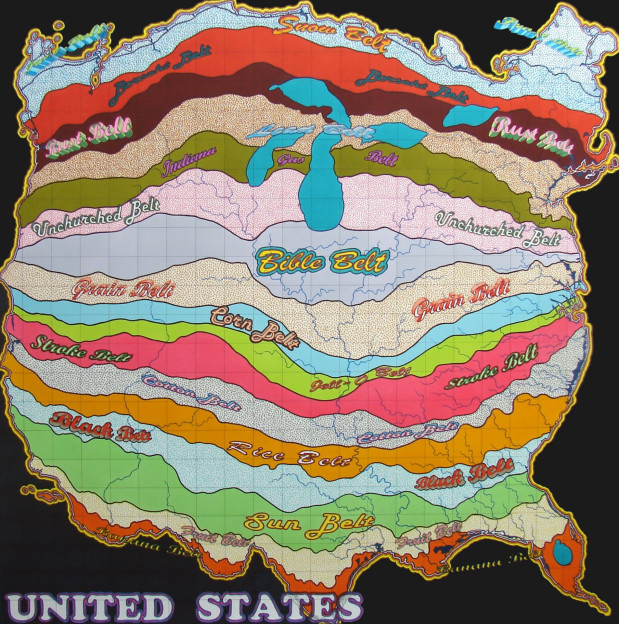 In the late 90’s, I was finishing up my undergraduate degree at the School of Visual Arts in New York. Growing up in Louisiana and Texas, I held onto my car, more for identity reasons rather than anything else, and drove North to South and South to North every semester. Eventually, I drove so often I didn’t need the map any more. Looking at the map in between Houston and New York, I started to remember my trips and what I saw along the way. I didn’t pay attention to the layout of the roads or which highway was a toll or under construction anymore, instead I overlayed the map with my memories and impressions of the landscape. This new relationship led me to my first series that appropriated the language of maps rather than simply appropriating the image of maps, a series of 56 hand-made ink drawings that took about 10 years to complete called the America Series.

In the Philippines, where I was born but never lived, the sentiment is that one is coming to America. Not to the United States of America, but just America. America the idea, the stereotype, and the cultural identity, was the metaphorical place immigrants really wanted to move to. Not Sugarland, Texas (where my family ended up). The idea was to appropriate the visual language of maps so I’m not bounded by the rules of the utility leaving the content to be anything I wanted. Also, using the name America directed the intention of the series towards more of an identity rather than a location.

This series became a map of America based on my own history, interaction, and memory of this country and the culture. There were some “American” traits I made sure to have just to keep the map reminiscent of the original like there had to be a region similar to the Great Lakes Region. There had to be an East Coast and West Coast with some sort of Canada to the North and Mexico to the South. There had to be a Gulf region and some kind of island state analogous to Hawaii. Oh, and there had to be 50 states. That’s sort of the signature look of the U.S. Except that for my America, I added 5 extra states for a total number of 55 as an homage to the car, since the kind of map I originally appropriated was the road map and the national speed limit was 55. The double nickels. These 5 extra states were mostly there to add a more focused commentary on the culture and history of America. 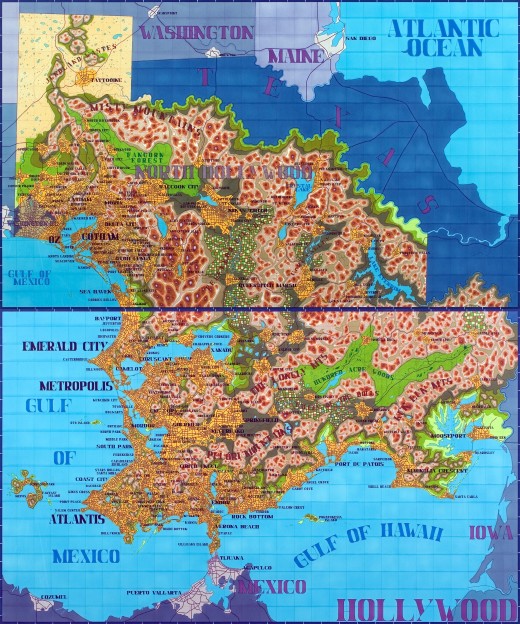 They are Hollywood (all the names in the state are fictional places in movies, books, and tv), Monopoly (has all the fortune 500 headquarters there. The capitol of Monopoly is Bentonville which is the HQ for Walmart), Disney (this company definitely runs like a sovereignty), Internet (first version was made in 2004 and the 2nd in 2009. You can really see how much is outdated in those 5 years), and Territory (which all the names are of places that the US has occupied or colonized which includes the Philippines). 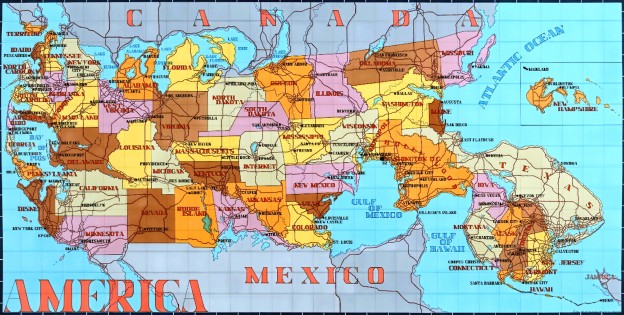 The last drawing in this series is the America Key Map seen above. As I was drawing this piece, nostalgia was brimming, conjuring past memories of what I was thinking about at the time, or what I was listening to, or who I had a crush on. So I chose a color scheme based on an old wooden map puzzle I had as a kid that had these same 5 colors. After the America series I moved on to playing more with the map language and what it can do. With the Strangerhood series, the idea was to use some of the conceptual strategies I used in the America series, but rather than critically looking at my own identity structure, I wanted to see if I can look at the identity structure of a place. The title Strangerhood is derived from sociologist Zygmunt Bauman. His allegorical use of the “stranger” as an outside force that plays both positive and negative effects on a society and in turn a place, was a position I was already familiar with since childhood being a first generation immigrant. This series took 6 neighborhoods in San Francisco that have already gone through the process of gentrification or are currently going through it. The six neighborhoods are The Mission, Fisherman’s Wharf, North Beach, The Castro, Chinatown, and Haight-Ashbury. 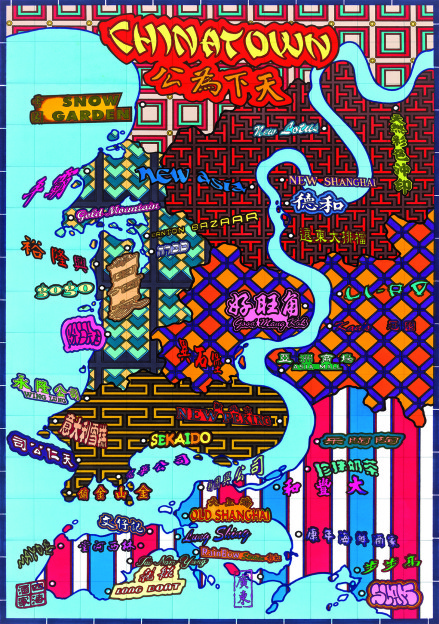 Besides the polarity of production and consumption that sociological theories bookmark gentrification in (a polarity that Bauman also uses to determine which camp the stranger falls into), I find that gentrification is part of a longer process that involves the appropriation of an identity or culture. What I had to do was to figure out how that identity or culture was shown, exploited, and/or shared. Keeping to the appropriation of the visual language of maps, I visited each of these neighborhoods and looked for the visual languages that dressed these neighborhoods. For example with the map of Fishermans Wharf, originally a locale where Chinese and Italian immigrant fisherman sold their catches to a growing population thanks to the gold rush, it’s become a popular tourist destination filled with what you would expect a tourist destination to have. I came into each neighborhood, embodying the role of the stranger, taking pictures of all the patterns, color schemes, and texts found in the local businesses, architecture, murals, graffiti, etc. The origin of the patterns range from the San Francisco Carousel on pier 39, the Musée Mécanique (which is itself a transplanted identity from a totally different part of town), Ghirardelli Square, and the famous clam chowder bowls that are usually served in those red and white paper food baskets often synonymous with a variety of tourist foods. There are hints to the Wharf’s immigrant past with some of the text with the occasional Italian Seafood restaurant. The text in these maps all come from my photos, to take advantage from the first person point of view, with only the color scheme changed. This appropriated text then takes on the role of cities on the map. So with map of Fisherman’s Wharf with city names such as “Rain Forest”, “Hard Rock”, or “In-N-Out”, it’s an easy jump to assume that this “place” is geared to the tourist to whom homogenous commercial establishments is the norm rather than the more culturally specific immigrant neighborhood and identities. 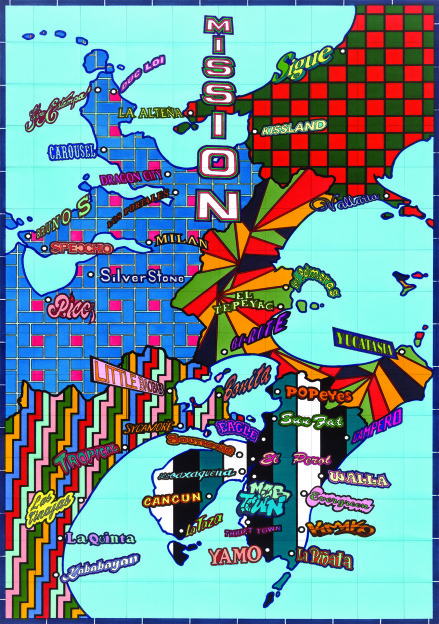 One element that all maps have is the temporariness of them. Places continually change as well as identities. The identity structure I have now is so different, more evolved, than in my youth and the same applies to the identity structure of a place. Maps need constant updates. This is one of the reasons why maps lend themselves so easily to digital versions. With static printed maps you get a snap shot in time of that place. You see an older map, one that is not too old in the visual language that it uses, and feelings of nostalgia and sadness arises at the loss of a childhood neighborhood and in a sense the lost physical connection to a memory. The interesting thing to ponder is what would my map of Fisherman’s Wharf look 20 years from now, if I re-did it? I don’t know which would be more jarring, if everything changed to the point of it having a totally different identity or if nothing changed at all. If I did my America series now instead of 15 years ago, what would it look like? Would whimsy, nostalgia, and humor dominate the aesthetics or something more darker and cynical? I would definitely have to have a 56th state for Trumpland. 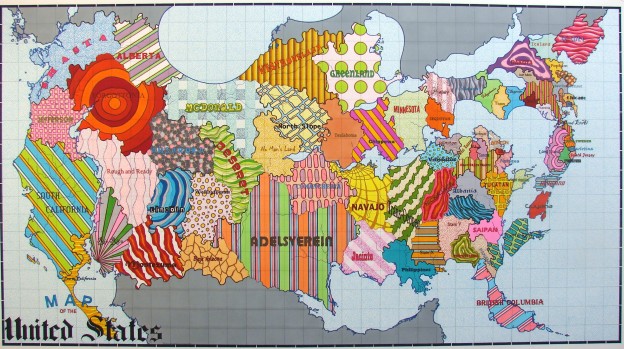 Lordy Rodriguez was born in 1976, the Philippines, raised in Louisiana and Texas, and currently lives and works in Benicia, CA. He obtained his B.F.A. degree from School of Visual Arts, New York and his MFA at Stanford University. For several years he has been working on a series of ink drawings that critically look at the effect visual languages have on culture and identity through the use of mapping and cartography. His recent exhibitions include, “Tahoe: a Visual History”, Nevada Museum of Art, Reno, NV (2015), “The Map at Art”, Kemper Museum, St. Louis, MO (2012), “Code Switch” and "The Map is Not the Territory", Hosfelt gallery New York, New York (2013 and 2011 respectively), “Surface Depths”, Nevada Art Museum (2009), “States of America”, Austin Museum of Art (2009), “Optimism in the Age of Global War”, 10th Annual Istanbul Biennial, Istanbul, Turkey, (2007), “The California Biennial”, Orange County Museum of Art, Newport Beach, California (2006), as well as public art projects with the San Francisco Arts Commission at San Francisco International Airport and the Federal General Services Administration. View all posts with Lordy Rodriguez →