The Thames (from London Bridge, Arizona to Sheerness, Canada), 2013, collaged maps (in 10 parts)

The Thames (from London Bridge, Arizona to Sheerness, Canada) is a collaged map by artist Layla Curtis. It is hand-constructed from fragments of international atlases and nautical charts, reassembled to form the familiar outline of the Thames. The reconfigured map examines the origins of place names along the shores of the river and through playful placement of place names from elsewhere, also takes us on a historical journey and explores the far-reaching influence of the Thames. Made in ten parts, the collage follows the river for over fifty miles as it flows eastward from London Bridge to the Thames Estuary. It references many of the notable journeys, ships, events, people and industries whose stories are inextricably intertwined with this stretch of the river. In this new fictional geography, The Wallace Line divides the river just east of the Dartford Crossing. René-Levasseur Island, a neatly circular Canadian lake-island,formed by the impact of a meteorite that crashed to earth over 200 million years ago, replaces the site of the Millennium Dome. Maps depicting Dog Islands, a group of tiny islands in the British Virgin Islands, are collaged together to form the Isle of Dogs. While Richlands, Cruise Ship Dock, Private Island, Cash Corner, Diamond Rock and Cockroach Island are used to create the city’s financial district at Canary Wharf. 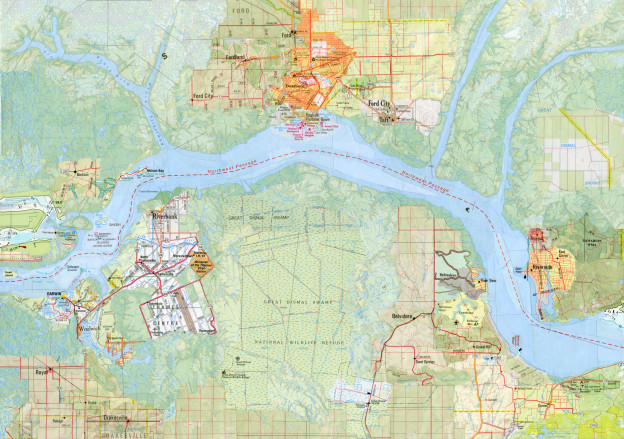 Throughout the work Curtis traces the region’s global namesakes and name-givers. Twelve Londons (or New Londons) are marked on the map, along with a New London Harbour, three New London Counties and a New London Bay. Thamesville, Thames Centre and North Thamesville, all found in Ontario, Canada, are located along the familiar sounding Thames River that runs through the Canadian cities of London and Chatham-Kent. Additionally, those places on the Thames that have taken their name from elsewhere (Russia Dock, Canada Water, Greenland Dock) and reference the Thames’s historic whaling, timber and seal-fur trading histories, are represented using fragments of maps from their name-givers.

On the site of the Ford Motor Company’s former vehicle assemble factory at Dagenham, fragments of maps from Dearborn, Detroit are collaged alongside other USA towns named Ford, Fordland and Ford City, while one of the largest sugar refineries in the world, located in Silvertown on the north bank of the Thames, is represented by tiny Sugar Island. 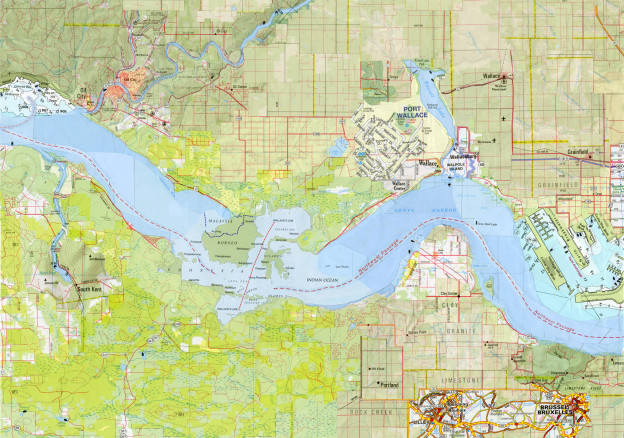 The Thames (Section 3: From Convict’s Bay, Bermuda to Tilbury, Canada)

The work also reveals some of the river’s surprising histories including London Bridge’s 1967 relocation to Lake Havasu City, Arizona, USA, where it was reconstructed piece-by-piece following its purchase from the Corporation of London by a flamboyant millionaire oil baron. The collage shows the 1830s bridge returned to its original position upstream of the Tower of London. Next to the repositioned bridge, the tower itself is replaced with a section of map from Raleigh, North Carolina, referencing Sir Walter Raleigh, who was imprisoned there charged with treason. Many notable ships were built and re-fitted in dockyards along the Thames, including HMS Beagle,

which was launched from Woolwich in 1820. Charles Darwin used the ship on his famous survey voyage around the world from 1832-6. Some of the places Darwin encountered, including the Galapagos, along with the Australian city that later took his name, are included in the work. Numerous references are also made to Darwin’s contemporary, Sir Alfred Russel Wallace, who lived on the north bank of the Thames at Grays. 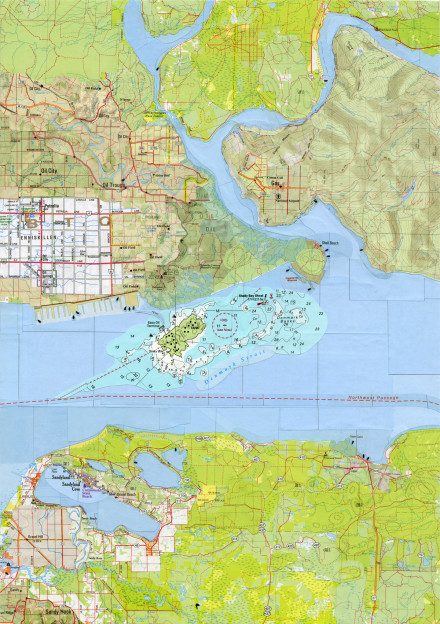 Martin Frobisher’s 1576 search for the Northwest Passage set sail from Blackwall. This part of the river was also the main departure point for the English colonisation of North America and the West Indies. Many of the key protagonists, destinations, ships, and trade resulting from these voyages are represented by places bearing their names. Prison hulks, housing convicts in decommissioned ships, were once used on the Thames and convict ships transported prisoners from London to Australia and other penal colonies within the British Empire. Convict’s Bay, Bermuda, once a location for British prison hulks, is re-located to the north bank of the river. Maps depicting many of the other destinations of the prisoners are used throughout the collage. The Thames (Section 6: From Admiral Cove, Canada to Colony, Texas) 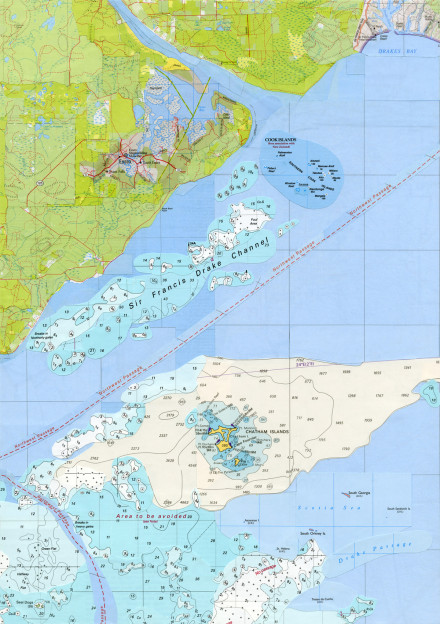 As the mouth of the river opens out towards the sea, it spawns a host of fictional and displaced islands, thematically clustered into mini-archipelagos. One branch of the meandering Northwest Passage arrives at Wreck Cove, situated on Montgomery Island – a place surrounded by wrecked ships and warnings of ‘Uncharted Rocks’ and ‘Inadequately Surveyed’ waters. Curtis names this imaginary island after the SS Richard Montgomery – a WWII ship that lies wrecked on this spot and is still precariously packed with explosives. A southerly branch of the Northwest Passage passes by Madeira and Cape Verde Islands before ending its journey at Thames, New Zealand – the furthest-flung namesake of London’s great river. 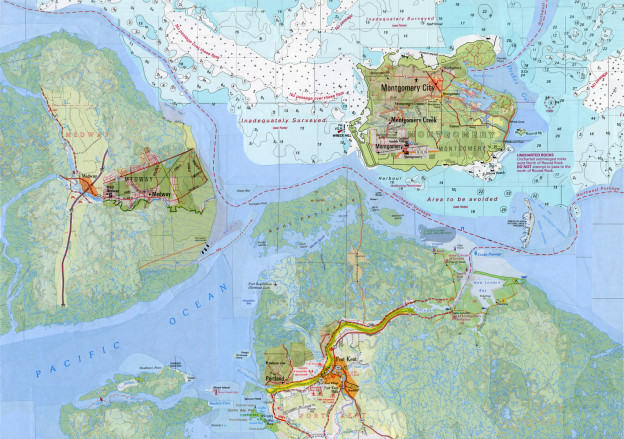 The Thames-based artist-led organization Cultureship commissioned this work for the Thames Festival in 2013. It was available as a free digital download from the Thames Festival website for the ten-day duration of the festival, and was exhibited on riverside walkways in front of Tate Modern and by Tower Bridge. The first section of the ten-part collage was reproduced as a signed, limited edition, digital pigment print to coincide with the work’s inclusion in the Bridge exhibition at Museum of London Docklands in 2014.

For further information about this work please visit www.laylacurtis.com

All images copyright and courtesy of Layla Curtis

Layla Curtis (b.1975, UK) studied at Chelsea College of Art (2000) and Edinburgh College of Art (1998). Her practice has a focus on place, landscape and mapping. Her multi-form work examines the attempts we make to chart the earth, how we locate ourselves, navigate space and represent terrain. She explores the ways in which we perceive, make use of and interact with the spaces we inhabit. Often she seeks to understand place by examining its connections with elsewhere. Her work, included in collections such as the Tate Collection, The New Art Gallery Walsall collection and the Government Art Collection, is exhibited widely and has been included in exhibitions such as Living History at Tate Modern, London, UK, and the Hayward National Touring Exhibition, You’ll Never Know: Drawing and Random Interference. Solo exhibitions include those at Spacex, Exeter (2013); Matt’s Gallery, London (2012); Ormeau Baths Gallery, Belfast (2008); The New Art Gallery Walsall (2006); Gimpel Fils, London (2006); and Milton Keynes Gallery (2000). International exhibitions include those at Musée des Beaux-Arts de Tourcoing, France; Pavilhão Lucas Nogueira Garcez-Oca in São Paulo, Brazil; and Canadian Centre for Architecture, Montréal, Canada. Commissions and residencies include: the Great North Run Moving Image Commission (2014), which led to a solo exhibition at The Gallery, Tyneside Cinema, Newcastle (2015); an Arts Council England International Fellowship to Antarctica (2005/6); and commissions by Film & Video Umbrella, Art on the Underground and Turner Contemporary. Curtis was artist in residence at Akiyoshidai International AV, Japan and selected for the Artangel Open Longlist 2014. View all posts with Layla Curtis →