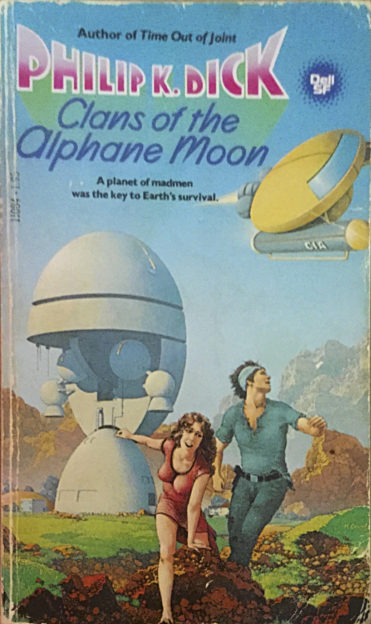 No Terran is an island.” – Lord Running Clam

For the last couple of years, I have been collaborating with a spirited entity, a slime mold I have named Lord Running Clam, in honour of my favorite character in Philip K. Dick’s Clans of the Alphane Moon. Dick’s Lord Running Clam is an itinerant slime mold who hails from Ganymede and acts as a kind of go-between for a community of agoraphobes hiding out in a San Francisco rooming house. LRC oozes back and forth beneath their tightly closed doors, gossiping telepathically and running a thriving business in postage stamps and uncut gems. My version of LRC takes the form of a lacey yellow growth that fans out across the agar of a petri dish. It extends a filigree of tendrils toward the flecks of oatmeal I drop in front of it, gradually engulfs them over the span of a few hours and then oozes on in search for more. ‘Mold’ is a misnomer for this organism as it is in fact a social amoeba or rather a single ameboid supercell that consists of a swarm of nuclei streaming through a shared blob of protoplasm like faces carried along in a crowd. Though it lacks a nervous system or any other kind of centralized brain, this humble entity is capable of making complex decisions and learning from its experiences. Taxonomically LRC is known as Physarum polycephalum, literally ‘the many headed slime’. Though we can categorize it into our systems of ontology, we can only conjecture how this simple organism experiences its world. What would it be like to be Lord Running Clam–there in a petri dish, experiencing a set of stimuli that includes me, looking down from on high, dropping flakes of oatmeal to elicit a response? 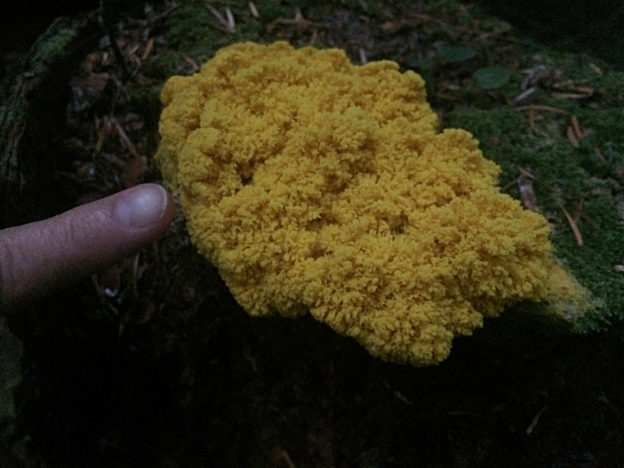 I first came upon one of these curious entities on a footpath through the British Columbia rainforest. The vivid, sulfur yellow mass was in stark contrast to the viridian moss that carpeted the damp forest floor. I was surprised to notice that what I had assumed to be some kind of sedentary, fungus was leaving a slime trail behind, the way a snail or a slug does.

This thing was moving –albeit very slowly.

After doing a bit of research I discovered the slime trail functions as a sort of external memory, reminding the slowly streaming mass where it has already been, optimizing efficiency in its relentless search for food. Physarum has garnered the status of poster organism for studies in emergence, which is the phenomenon wherein simple signals propagate through a swarm of interconnected individuals, imparting the collective with a responsive reasoning capability, far more powerful than that of any one member of the group. The flocking behavior of birds is classically emergent, epitomized by such phenomena as the great seething ‘murmurations’ of starlings that fly together in a an ever-changing formation of thousands of individuals, or shoals of tiny fish like herring or sardines, or freeway drivers navigating rush hour traffic. Though brainless and nerveless, a streaming Physarum supercell can find its way through complex mazes and easily solve what is called the ‘shortest path problem’ by reckoning the most efficient network linking disparate points, as in scattered towns that need to be connected by a road network. This useful trick of Physarum has been utilized by human designers modelling roads and subway systems1, as long as the points they are trying to get connected are represented by oatmeal flakes, which Physarum really, really likes!

The more I thought about it, the more I realized this ignominious little yellow blob, so alien to us in appearance, something most people wouldn’t even imagine relating to, nevertheless shares with us some important attributes. Like us, it prefers some things and dislikes others. Physarum recognizes certain signifiers in its perceptual world (things that are important to it), makes choices and acts according to its desires–seeking out oatmeal and darkness and moisture and avoiding bright light for starters. A recent Royal Society published study2 has shown Physarum’s decision-making process is not just a mechanical response but something more nuanced. It turns out slime mold is capable of acting irrationally3–surely an indication it has something fundamentally more in common with the way we ourselves relate to the world.

But what’s so great about irrationality? It seems so inefficient and dumb.

Yet the capacity to be irrational reveals the glimmer of subjectivity, the prospect of an independent relationship with one’s environment which, though contingent upon physical and biochemical signals, extends beyond mere mechanistic reactivity into the realm of choices and feelings.

Does the slime mold’s perceptual relationship with its environment qualify as consciousness or mind? We may never know this absolutely but we are free to perform the thought experiment of imagining what it might be like to exist inside Lord Running Clam’s slimy subjectivity. While we’re at it, we might also want to challenge our sense of human exceptionalism and ask ourselves: why wouldn’t  a slime mould have consciousness? Why do we so often feel that consciousness in nature is the exception–our special privilege–rather than the rule?

The German bio-semiotician Jakob von Uexküll had a wonderful word for an organism’s perceptual world. He called it the Umwelt; the German translating literally as the surrounding world of a given subject, perceived through its own senses. Von Uexküll imagined what the world might look like from the point of view of a host of creatures—ticks, sea urchins, jackdaws, flies, dogs, chickens—each from within its own Umwelt or sense world. An Umwelt is characterized by semiotic triggers, the signals an organism senses and responds to. Sea urchins are sensitive to contrasts between light and dark. A sudden shadow might belie the presence of a predatory fish or an approaching storm. Ticks too, odious as they might seem to those of us who living in fear of Lyme disease, inhabit a sense world signified by body heat and the odor of butyric acid, signals which the mammals on whose blood they feed give off, alerting the tick that a meal might be in the offing. Jackdaws and other social birds pay very close attention to the flight paths of their companions, the trajectories of which can signify impending danger or territorial infringements by rivals.

Plants too have been shown to be aware of their environment, and perhaps more remarkably, they are aware of each other.  In the Hidden Life of Trees, Peter Wohlleben4 describes complex subterranean networks that connect tree roots via the intermediary of symbiotic fungi. This results in a vast sentient system under the forest floor, referred to as the wood wide web,5 through which trees share chemical signals as well as redistribute nutrients between (for example) mature trees that are well-nourished, toward saplings that might be struggling to photosynthesize effectively in the shade of the forest canopy. This kind of ‘nursing’ behaviour has been documented in Douglas fir (Pseudotsuga menziesii) by the Canadian researcher Suzanne Simard6 and raises some serious questions about long-held forestry paradigms that assume trees are in a constant state of brutal competition with each other for dominance in the forest canopy. How lovely to find out that instead they sometimes help each other out!  As their perceptions seem to be networked and mediated by the agencies of their symbiotic fungal companions, it is interesting to speculate if a tree would even have sense of individuality or whether it exists more as a sentient node in a larger assemblage of forest consciousness.

It turns out that we too perceive the world through symbiotic intermediaries. Recent studies indicate human gut microbes substantially affect our moods7 suggesting the perception of the world we take for granted as our own is at least partially intersubjective. If this is true for us and for trees, it stands to reason that many if not most organisms perceive things intersubjectively, given the prevalence of symbiotic arrangements in living systems, and so the notion of what it is to be an individual subject, perceiving the world through our senses, becomes more than a little abstract. The American biologist Scott Gilbert summed it up best when he declared: We are all lichens now.8; lichens being iconic examples of composite, symbiotic organisms that are basically shared platforms or assemblages consisting of fungi, cyanobacteria and algae.  As human beings, we share with all other eukaryotes (life forms that have nucleated cells) a common ancestry, which came about when certain ancient bacteria melded with other organisms such as cyanobacteria, eventually subsuming them as organelles9. We are, and pretty much always been, composite beings–so we might as well get used to thinking of ourselves in the plural.

A thought experiment is one thing, but Wohlieben’s and Simard’s work really does offer the tantalizing possibility that trees have some form of subjectivity. I am defining subjectivity here as being a subject, i.e. capable of having conscious experiences. Of course I might expect some resistance to such a proposition, as it undermines a deeply-held belief in Western culture that we humans are somehow cognitively exceptional. We are after all a species apart. Our obvious self-awareness is reinforced by our highly evolved language skills and our ability to think abstractly; which make it easy for us to position ourselves to one side of what Latour calls ‘the nature/culture’ divide10. But is this self-imposed apartness automatically legitimate?

The often quoted Buddhist philosopher Thich Nhat Han articulates the Zen view that there is “No separation between self and other and everything is connected.” 11 Given our increasing awareness of how biologically entangled we are with other living things, from the bacteria in our guts, to the corn plants we long ago domesticated that can no longer survive without us, to the rats that eat our garbage, the ‘no separation’ idea makes a whole lot of sense. As well as our material codependency, what we also have in common with these beings is our shared capacity to have experiences. So if we want to improve our relationships with those many non-human subjects with whom we share the planet, maybe we should pay more attention to how they perceive it.  We humans are blessed with a cognitive ability that allows us each to imagine the world from another’s point of view, the so-called theory of mind. Though eminently useful in maintaining our social cohesion, we could emulate Von Uexküll and use theory of mind to check into the realms of non-human subjectivity more often.

What is the point?

Is this just some crazy mental exercise?

Oliver Kellhammer is an artist, teacher, activist and writer who focuses primarily on living systems. He divides his time between rural British Columbia where he enjoys communing with slime molds, and New York City where he lectures in Sustainable Systems at Parsons The New School for Design. His web archive can be found at www.oliverk.org View all posts with Oliver Kellhammer →