While at UCSD as a graduate student in art, I set out to learn about artificial life by hanging out in the distributed cognition lab of the cognitive science department. I had an appointment to chat with a graduate student, Michael Hayward, who was modeling the behavior of oil-eating bacteria after a theoretical oil spill. We were looking at the patterns emerging from his simulations when another graduate student, his friend Deborah Forster, spiritedly questioned the value of synthetic models of animal behavior in comparison with the complexity of real animals interacting in real environments. Forster had studied olive baboons in the savannah in Kenya. In the contest between the neatly propagating mechanical microbes and hairier world of primates, Deborah Forster won the day, and instigated a series of primate-related projects lasting over a decade. Methods of studying nonhuman primates inspired ways of thinking about human social life as alien, which is useful for art. Recently I’ve returned to microbes. Bacterial and fungal colonization of human bodies makes people ecosystems, deconstructing individualism, and obliterating the division between the inner and outer environment. A through-line between the primate order and the bacterial kingdom has been Donna Haraway’s work, whose stories about media, art, gender, biology, scientists, and environmentalism have encouraged these conceptual leaps.

I was intrigued to learn how Deborah Forster’s study of the sexual politics of baboons was useful for her work as an anthropological consultant in a car design company. Her explanation was wonderful case study of distributed cognition, via its founder Ed Hutchins (1995) with whom she studied. Deborah studied the dynamics of “sexual consorts” in which a male tries to monopolize access to a receptive female in the face of other follower males. She had hand tallied 180 instances this intricate social dance, and in videos, studied them frame by frame in a way which reminded me of gaze theory. She described social sexual strategies communicated nonverbally through head movement versus body orientation, displacement behavior (scratching), yawns belying large canines, greeting and grooming (2002). Moreover, she showed how these behaviors played out through coordination of hormones, stress, and historical relationships. This personally narrated tour of baboon smut began for me a process of reframing agency, from the level of individuals to groups, from brains to the unconscious nervous systems of bodies, and from cognition as a personal, internal phenomenon to an interactive, environmental one.

Deborah overcame my many resistances to primatology: reading Haraway, I asked, aren’t scientists just projecting their own culture on to apes and monkeys? In answer, Deborah described methods of ethology: observation, field notes, longitudinal studies, visualizing data in state-space diagrams. What about anthropomorphism? Some argue empathy is justified based on the physiological and psychological commonality between human and nonhuman primates (Keeley). Like other scientists, Deborah is in favor of rigorous inter-observer testing of theories based on apparent similarities. How do women scientists deal with patriarchy in other species? She introduced me to feminist primatologists like Linda Fedigan whose Primate Paradigms described dominance, agonism, female roles in such rich and precise ways as to break down stereotypes and facile cross-species comparisons. These still-difficult questions continue to be generative in my artwork and teaching.

Deborah invited me on a walk with her advisor Shirley Strum, an anthropologist of baboons and collaborator with Bruno Latour. Strum asked, how could a video make the soap opera of baboon life as easy to understand for a lay audience as Friends the sit-com. In the sit-com you can identify characters and plot quickly without much previous knowledge of the show. Watching raw footage of baboons, the uninitiated cannot tell individuals apart or what behavioral patterns are unfolding. I thought the challenge of visualizing baboon social life with human actors would be illuminating about media as a prism for understanding other species and ourselves. Derek Bousé (2000) rightfully argued that wildlife films are more akin to Hollywood narratives than documentaries, with their dramatic projections of human morality on to animals as protagonists and victims. I chose film noir to stylize and historicize a bar scene. Film noir, in the 1940’s, presented characters in the urban jungle with their femme fatales and strong, silent-type masculinity. Similarly, in the postwar era, baboons were considered the model for human evolution because they lived in the savannah instead of in the trees, with males much larger than females their role appeared to be to protect females and the young from predators. Zuckerman’s 1920’s studies based on overcrowded zoos overestimated the frequency of competition and violence between males and were carried over by DeVore and Washburn in postwar primatology (Clark 84). With longitudinal studies, scientists like Strum described long term “friendships” between males and females, the matrilineal structure of baboon society (young males leave; females stay and maintain the rank of their mothers), and group decision making, (i.e., what area to forage in for the day). This research culminated in the first of the Primate Cinema series, Baboons as Friends, a two channel video with Deborah’s consort turnover footage on one channel and my film noir on the other.

The process of working with actors to explore nonhuman primate behavior was instructive. It reflected back all the tactics that actors normally use: theater exercises commonly play with status and rank, role-playing, nonverbal communication, studying animals at the zoo to expand one’s repertoire of postures, paces, and gaits. I invited Deborah to run a workshop with me and a physical theater coach called “How to Act like an Animal.” I was beginning to move beyond media representations of animals, and to work on the level of subjectivity. How would it be different to be a female bonobo than a female chimpanzee? We tried role playing in different primate societies. What would it be like to inhabit different primate bodies? Thinking about mirror neurons, and the excitement of watching the acrobatics of chimps swinging on tree branches, I invented a game of animal karaoke. The ensemble acted out a scene from a wildlife film, watching it as a “script” on screen. This exercise became the film “How to Act like an Animal,” and I reproduced the workshop in Manchester and Zurich.

The workshops proved helpful for the next projects in the Primate Cinema series, especially “Apes as Family.” Learning that chimps in captivity watch film as a form of enrichment, I set out to create a film expressly for a chimpanzee audience, with human actors playing out primate dramas in chimpanzee costumes. This project, which was commissioned by Arts Catalyst and received a major award from the Wellcome Trust, is described elsewhere. Whereas “How to Act like an Animal” traded on the physical challenge of emulating animals and the silliness of playing out one’s concept of an animal, the costumed chimp-people were rough estimates of apes, which we hoped would communicate to our audience. I learned the gestures, vocalizations, and facial expressions of chimps with help from Deborah and Sarah-Jane Vick, a comparative psychologist, who had helped to create a chimpanzee facial action coding system, “ChimpFACS.” Started by Paul Ekman at as a catalogue of universal emotions mapping facial expressions on to underlying musculature, FACS have now expanded to orangutans “OrangFACS,” horses “EquiFACS,” and DogFACS. With my computer science colleague Elizabeth Sweedyk and several students, we created an ape avatar controlled by human bodies and faces which could be used for people to communicate with chimps, and simultaneously teach people about chimpanzee emotions and communication. 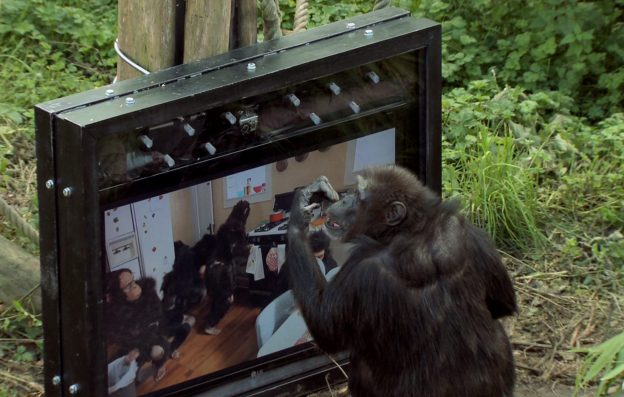 Still from “Primate Cinema: Apes as Family” by Rachel Mayeri, 2012, 22 minute two channel installation and 12 minute single channel video. Cindy at the Edinburgh Zoo is watching a drama made exclusively for chimps on a monitor planted in the outdoor enclosure of the Budongo Trail exhibit.

After exploring acting like animals and interspecies communication, it was somewhat of a relief to work on a project that involved talking to people, specifically primatologists. In 2015, I was commissioned to create an artwork on a historical woman scientist, and chose Alison Jolly (1937-2014), best known for her work on ring-tailed lemurs and conserving Madagascar’s unique environment. I was able to work with Deborah again through the Scientific Delirium Madness Resident Artist Program at Djerassi, in collaboration with Leonardo/ISAST. We wanted to trace out the primatologists’ social/intellectual network in the same way that primates’ networks have been. Primatologists have communities, territories, watering holes, and cultures just like nonhuman primates do, with their schools, alliances, papers, and funding resources. Haraway mined this analogy richly in Primate Visions, which sketched Jolly and others’ place within the intellectual history of the field. Jolly was a student of the “father of modern ecology” Evelyn Hutchinson at Yale in 1966, and wrote a groundbreaking article arguing that sociality, not tool-making, was the driver of primate intelligence. Her species, the earliest of the primates, was not particularly dexterous with its hands (more like paws than apes’ opposable-thumbed tool-making appendages) but they were already managing the complexity of group living.

Rachel Mayeri is a Los Angeles-based artist working at the intersection of science and art. Her videos, installations, and writing projects explore topics ranging from the history of special effects to the human animal. For the past several years, she has been working on a series of experimental videos exploring the primate continuum entitled Primate Cinema. In 2011, she received a major arts grant from the UK-based Wellcome Trust to make original videos to entertain captive chimpanzees. The resulting project, commissioned by the Arts Catalyst, is called Primate Cinema: Apes as Family. There are two versions: one is a 12 minute single channel video and the other is a 22 minute two channel video installation. The single channel video was selected in 2013 for Sundance, Berlinale, True/False Film Festival, and Transitio Mexico Festival of Electronic Art. The two channel version premiered at Abandon Normal Devices and was featured at the Edinburgh Festival of Art, and won a prize for hybrid art at Ars Electronica. Primate Cinema: Baboons as Friends (2007), is a reenactment of a baboon social drama with human actors, produced in collaboration with primatologist Deborah Forster. Primate Cinema received a Semifinalist honor for the International Science and Engineering Visualization Challenge (sponsored by NSF and The Journal Science) and showed at the Museum of Contemporary Art in Denmark. Stories from the Genome: An Animated History of Reproduction was supported by Creative Capital Foundation and won an “International Media Art Prize,” sponsored by ZKM. She programmed a DVD of videos by artists and scientists entitled Soft Science , which is distributed by Video Data Bank. As Guest Curator at the Museum of Jurassic Technology, she contributed to an exhibit on the history of special effects, Miracles and Disasters in Renaissance and Baroque Theater Mechanics. Her chapter on artists’ experiments with science documentary was published in Tactical Biopolitics: Art, Activism, and Technoscience, edited by Beatriz da Costa and Kavita Philip (MIT Press. 2008). Shown at Los Angeles Filmforum, The Center for Art and Media in Germany, and P.S.1/MoMA in New York, she is Associate Professor of Media Studies at Harvey Mudd College. http://rachelmayeri.com/ View all posts with Rachel Mayeri →