The work that follows is predicated upon an entirely subjective approach to visual research: emerging as a result of visits to several collections, during which I began to ask: what is it that connects these disparate objects, and is there any value in developing these connections?

When I began exploring anatomical collections, I was interested in emulating them – making work that was as beautiful, as informative, and as disturbing. I came to realise that nothing I could make had as much affective power as the subjects and specimens already extant. This isn’t to say that this process was without interesting outcomes: I did get to put my own head in a jar, after all. 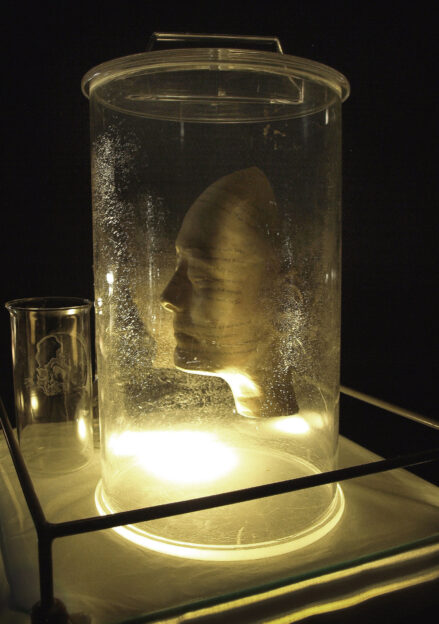 My sketchbooks are my museums – collections of bodies and parts, whose taxonomies are dictated by chance, by glance, by aesthetics or idle curiosity. Working in situ carries with it a range of impressions:  the presence of other visitors, their conversations, the smell of the room, the feel of the materials I use or the chair that I’m sitting upon –  all this information is embedded in the work made in that space, and recalled when revisiting that work. That secondary sensory information is often is what inspires other lines of thought or research. The time spent in front of an object while drawing creates a heterotopical space in which to consider both the object and its context, alongside one’s sense of self. 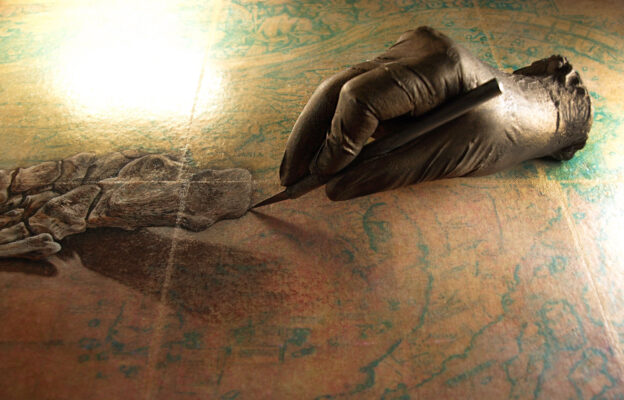 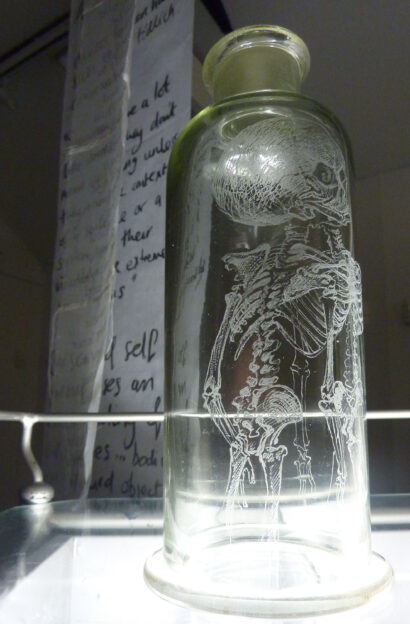 The  exploratory sketches themselves that began to develop into something else: not just a record of a bone or an organ, but a process that blurred the line between it and I. In the anatomy museum I found a place for my body, so troublingly other, and its constituent parts. A Locard principal of immaterial things, shimmering between the brittle glass of the cabinet or pot: something intagible is taken away – and something, perhaps, left behind. 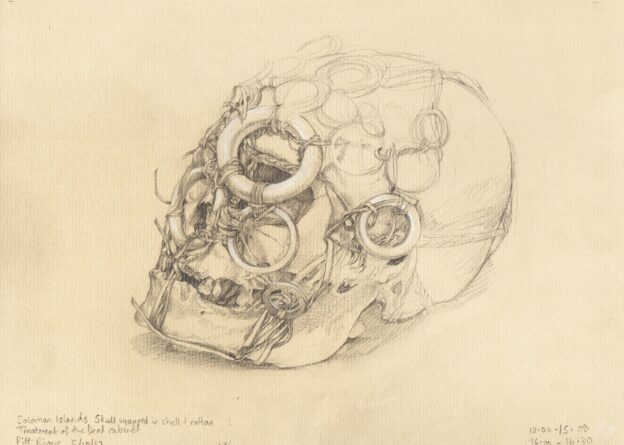 Travelling to different collections, different countries, brings other notions into play: an entirely subjective connection between cities and specimens. Connections that only exist because I had been there, and drawn these things. Collections are mutable: specimens get separated, move around. Sometimes lost, sometimes repatriated, sometimes relegated to a store or cold room to wait out their eternal and ironically immutable life in the jar or crate. In visiting and revisiting certain subjects, I have found relationships that evolve and develop: just as I am a different person each time, my response to these parts of former people changes on each visit. 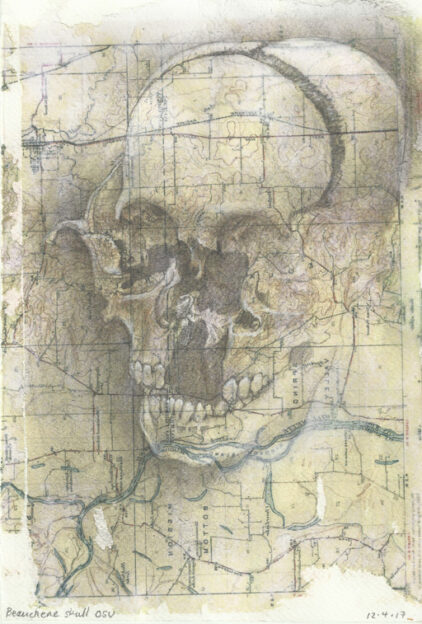 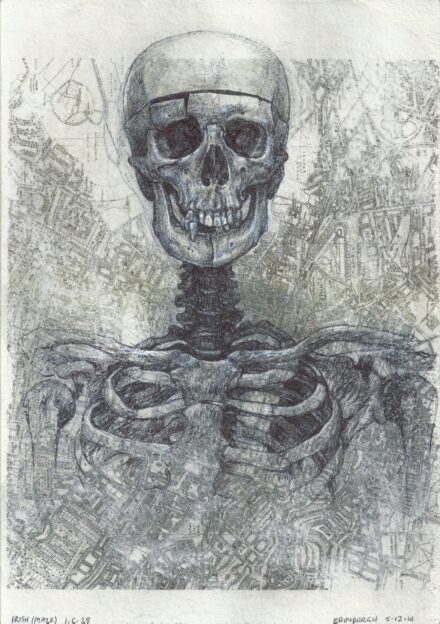 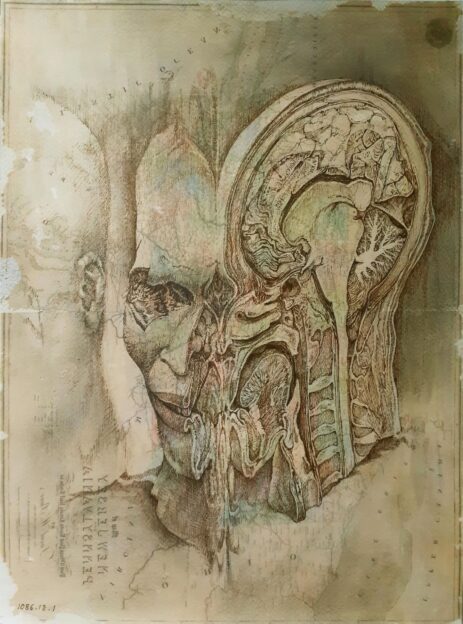 Actually these connections have become simpler: the maps and bodies speak for themselves. The microcosm of the internal organs over the macrocosm of the built environment is an easy fit. Rennaisance maps in particular seem to epitomise this concept: Mercator’s cordiform projections, Waldseemuller’s Cosmographia Universalis. While the cordiforme, or heart-shaped,  projection  originated in Ptolemy’s early works, the development of a heart shaped map projection during the Renaissance era is no accident, reflecting the belief in the heart as a symbol of the world – the inner emotions affecting the physical, outer world. 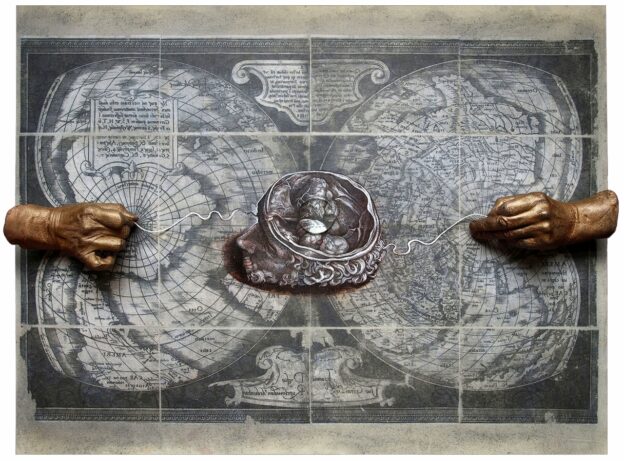 The pandemic has brought other challenges. My preference for always working in situ – even if that meant the drawing remained unfinished – was curtailed. Instead I began to revisit the models and specimens that had left their mark on me, drawing from both contemporary pathological collections and historical anatomical models and illustrations. Interpreting the work of others is never without issue: but using traditional media and earthy colours, the bleached-out, static wet specimen recovers it’s warm humanity, even in death. Rehumanising the abject corpse, part by part.

The world closed in to the space of my small attic studio, and these intimate portraits emerged. 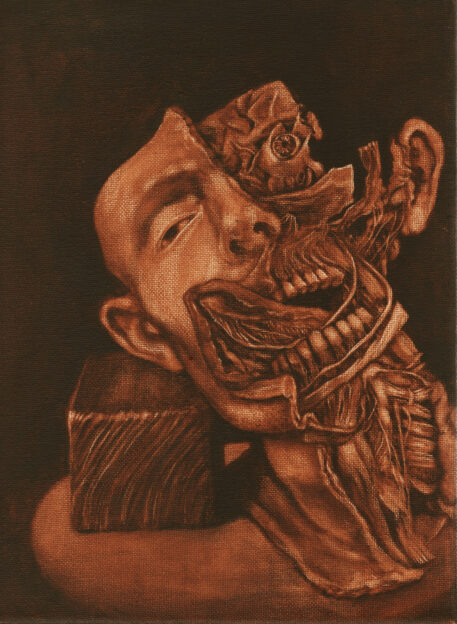 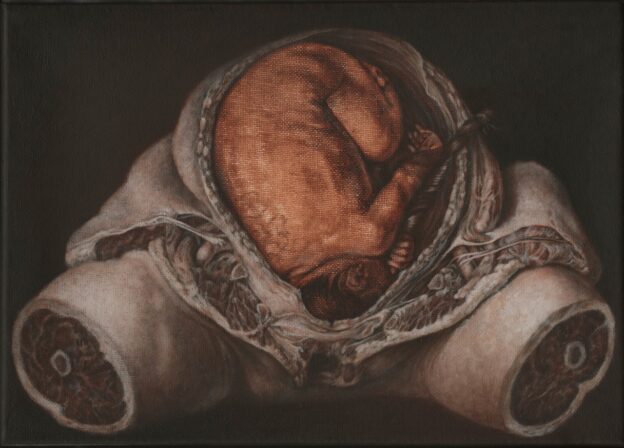 Itinerant Other. Oil on canvas

This specimen of a heart – with ruptured septum caused by massive myocardial infarction – was initially the first of a series of workshops drawing on the pathology collection of St George’s Univeristy Hospital in London. But each time I drew or painted it I found something new, terrible and wonderful in its bleached, dissected pathology. 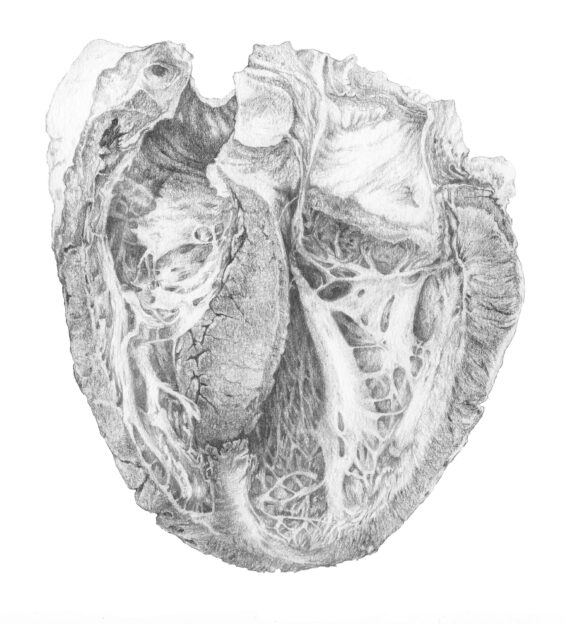 Bauble I. Pencil on Bockingford paper 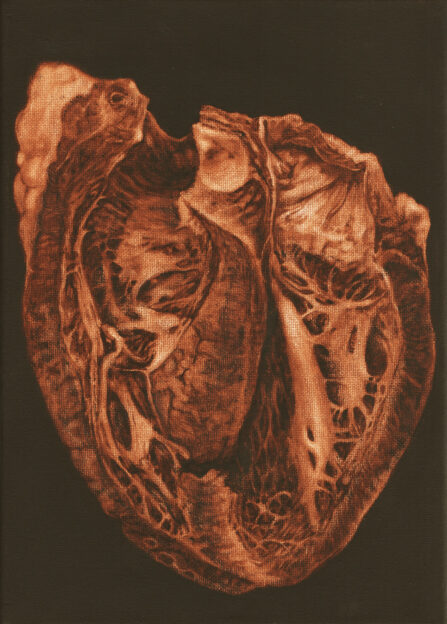 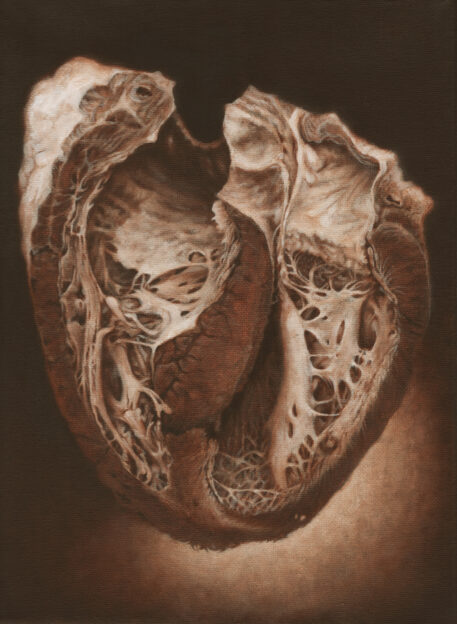 It could be construed a landscape:  the morphogenesis that shapes these tissues also informs the  mycelium of fungi, the forms of trees, the paths of rivers, or the organic pattern of footpaths and roads that eventually describe a city.

The chordae tendinae of the heart  connect, cross, support and bind like a net. This nexus of veins, valves and tendons  might constitute a compact, organic map – one that we carry and consult at all times, wherever in the world we are. 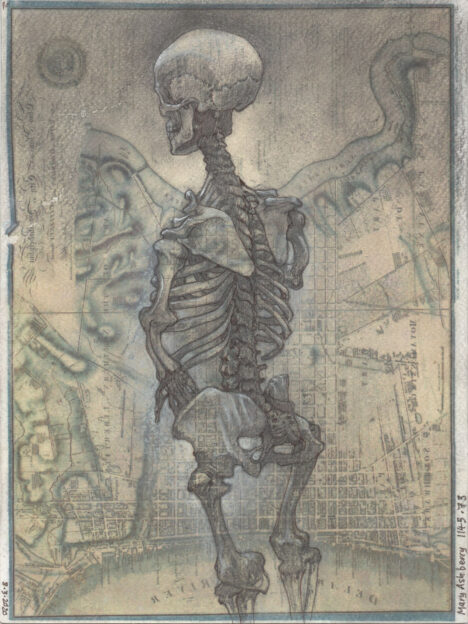 All images copyright and courtesy of Lisa Temple-Cox

Lisa Temple-Cox's work explores interstices: between science and religion, the normal and the pathological, the familiar and the uncanny. Central to her practice is her search for identity and sense of belonging as a mixed-race post-colonial child. She is fascinated by Vanitas as both categorisation and as a symbol of the changing states of life. Her current research interests explore the aesthetics and symbolism of the medical museum with a focus upon the anatomical. It examines our own subjective experiences and perceptions of the body in life and death using a range of media, including drawing, assemblage, and installation. Recent work has developed from a practice of using a glue-based transfer process on watercolour paper to create a background for overdrawing. This painstaking method of image transfer slowly reveals the underlying image – reversed, worn and weathered - that results in a de-familiarised ground over which she draws directly. This creates a palimpsest on which the overdrawing emerges while remaining part of the ground. The use of maps situates the objects drawn in the locations in which they are found – be it city, state or country – although the maps themselves may be several centuries older than the specimen drawn. The work is thus out of time and place, while remaining inextricably bound to this small world. She has developed her professional practice as visual artist and researcher over the past 25 years. During this time she has been commissioned by both public organisations and private individuals making artwork for institutions as varied as schools, hospitals, museums, libraries, and even public conveniences. She has exhibited widely and is a practised speaker and workshop leader, and has undertaken a number of artist residencies in Europe and the USA. (bio details by Katherine Wood) View all posts with Lisa Temple-Cox →