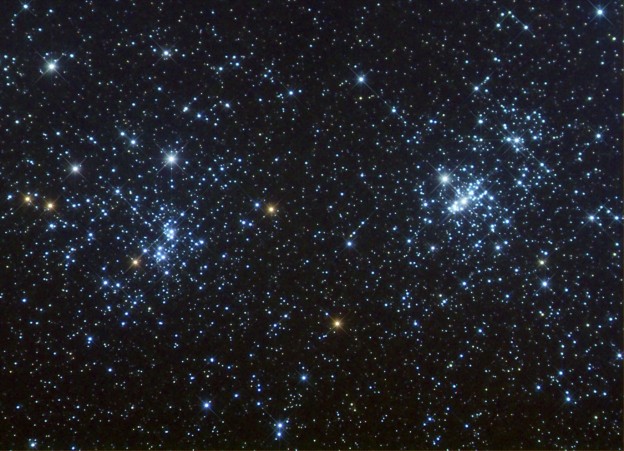 Step outdoors on a clear night and gaze at any of the stars above. Depending on its distance from Earth, its light has traveled through space for years, centuries or millennia at enormous speed before it reaches your eyes to appear as a brilliant spark amid darkness. If, for some cosmic reason, the star were suddenly to brighten or grow dim, you would not see the change until that same long time span had gone by. Now step indoors and switch on a lamp. Its glow apparently illuminates the room in an instant, but that light must also travel from the lamp to your eyes. It does so at the same speed as light from a star and covers meters in mere nanoseconds. Your eyes and brain function more slowly than that, and so the room seemingly brightens or darkens instantaneously when you turn the lamp on or off.

Though the earthly and cosmic travel times are so different, they represent the same fundamental facts about light: it moves rapidly and in straight lines from a source to your eyes – or at least so it seemed to the early Greek philosophers who contemplated light. We have modified these conclusions as our knowledge of light’s intangible nature has evolved into deeper understanding – deeper, but incomplete, for light still holds mysteries. Yet we know it well enough to predict its behavior and manipulate it with exquisite finesse for scientific research, technological application, and aesthetic use. Most important for us, perhaps, we also know how to create it to illuminate the night.

The prehistory of light

But though humanity’s generation of artificial light dates back many thousands of years, light has been part of nature almost since the Universe was born. In the form of packets of energy called photons, light appeared soon after the Big Bang, the explosion of space, time and energy that began the Universe some 14 billion years ago. Now light continues as an essential part of the cosmos along with matter, which light helped to form. Einstein’s equation E = mc² indicates that matter can change into energy, and energy into matter. The latter happened after the Big Bang when new-born photons collided and turned into electrons and other elementary particles. These eventually combined into today’s stars, planets, and our own Earth, while the remaining light traversed space, as it still does. That primeval light, the Cosmic Background Radiation, is an important clue to the Big Bang and the evolution of the Universe.

Along with its role in the physical universe, light has also been essential for life. Light energy from the Sun helped create the complex molecules that came together to form life on our planet, and sunlight sustained life forms as they developed into plants and animals. As these became more complex and differentiated, they reacted to light in varied ways. Prehistoric humans surely responded with joy or fear to the Sun’s rising and setting without knowing the nature of its light. Perhaps as a result of those feelings, light has long played a role in human spiritual and divine beliefs, and in the human desire to seek beauty and create art.

Sidney Perkowitz was born in New York, attended Brooklyn Polytechnic Institute (now the Polytechnic Institute of NYU), and earned his doctorate in condensed matter physics at the University of Pennsylvania. As Charles Howard Candler Professor of Physics Emeritus, Emory University, he has written or edited over 100 research papers and monographs; six books of popular science (Empire of Light, Universal Foam, Digital People, Hollywood Science, Slow Light, Hollywood Chemistry) which have been translated into seven languages and Braille; and numerous articles. He writes and speaks nationally and internationally about science and art, science in entertainment, the science of food, and other popular topics, with media appearances that include CNN, NPR, and the BBC. He is on the Board of Directors and blogs for the Science and Entertainment Exchange, National Academy of Sciences. He is a Fellow of the American Association for the Advancement of Science. http://sidneyperkowitz.net/, @physp. View all posts with Sidney Perkowitz →