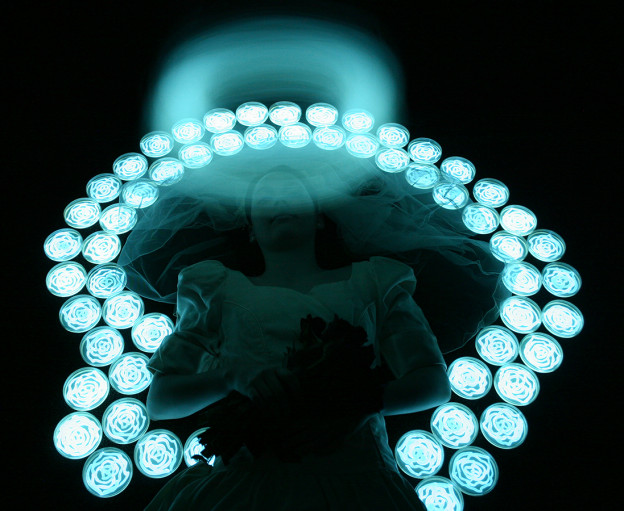 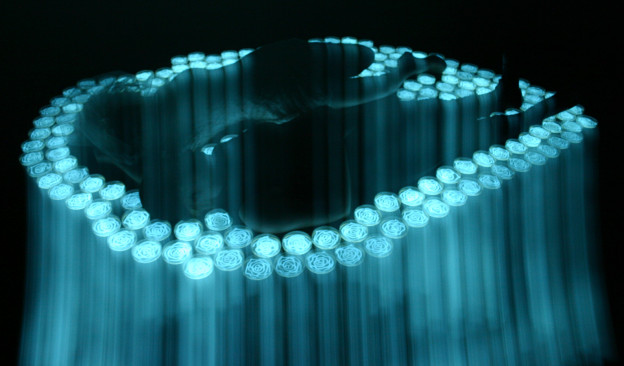 “Bed of Roses: Two Women Getting Married,” photograph by the light of bioluminescent bacteria, Hunter Cole.

“Angel Bride” and “Bed of Roses: Two Women Getting Married” are a part of the Bioluminescent Weddings series where people are posed for wedding photographs by the light of bioluminescent bacteria. One of the functions of bioluminescence in nature is to attract a mate. 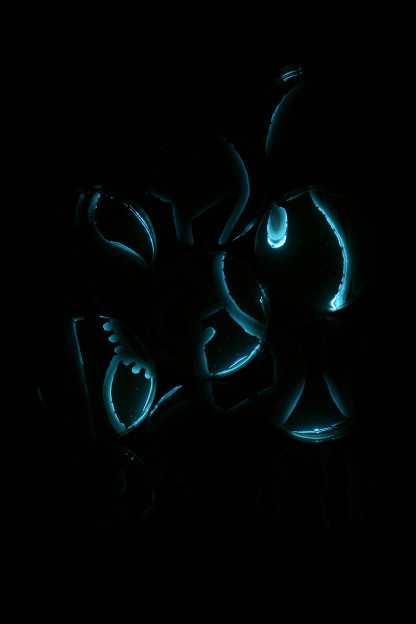 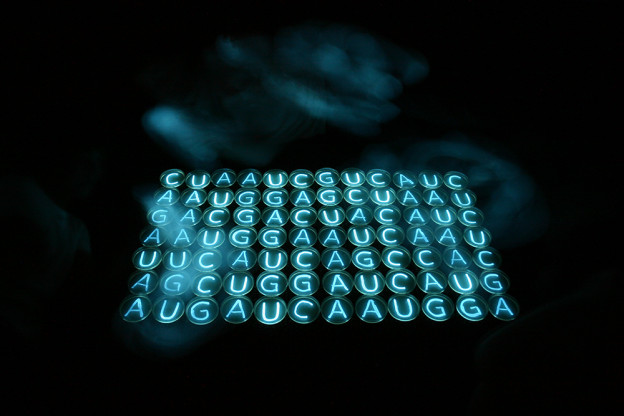 The species of bacteria Hunter Cole uses lives in fish guts in the ocean.  “Living and Dying in Fish Swimming” is spelled out using the genetic code.

Hunter Cole – Her Own DNA – Living Drawings Created with Bioluminescent Bacteria with Protein Music from Hunter Cole on Vimeo. 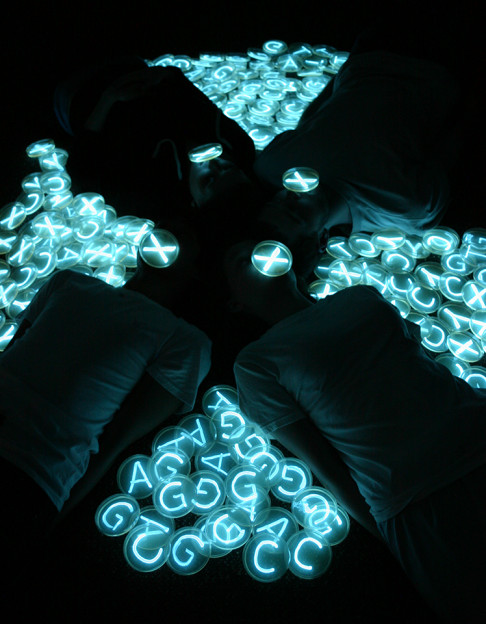 “X Chromosome” is a photograph taken by the light of bioluminescent bacteria. Four people are in the shape of an X chromosome. It is also a homage to Suzanne Anker’s “Difference and Repetition”. The alphabet of DNA is written in bioluminescent bacteria (A, T, G and C). There are also Xs and Ys. The X and Y relate to two XX chromosomes create a female and XY chromosomes create a male. The X and Y also relate to the unknowns in genetic technologies. 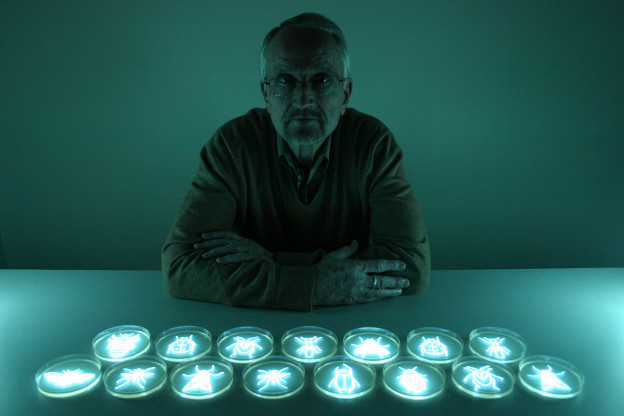 “The Entomologist I: Portrait of Bob Hamilton,” photograph by the light of bioluminescent bacteria, Hunter Cole. 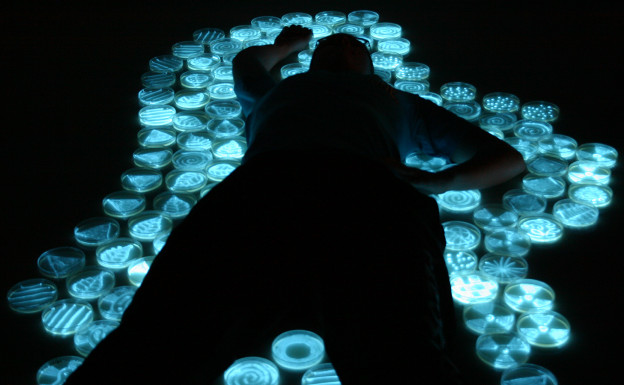 “Body,” photograph by the light of bioluminescent bacteria, Hunter Cole.

“Hands” is a photograph of a plaster sculpture of Hunter Cole’s hands taken by the light of bioluminescent bacteria. 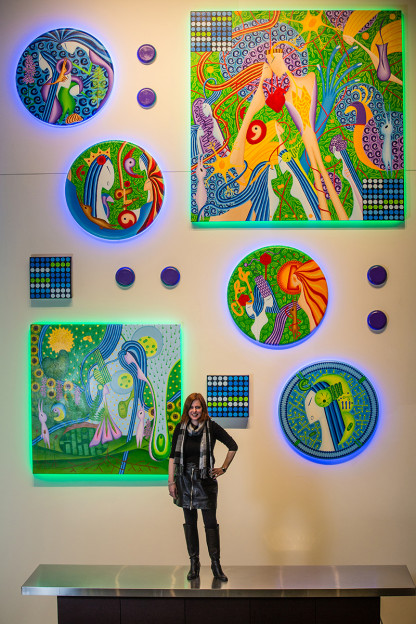 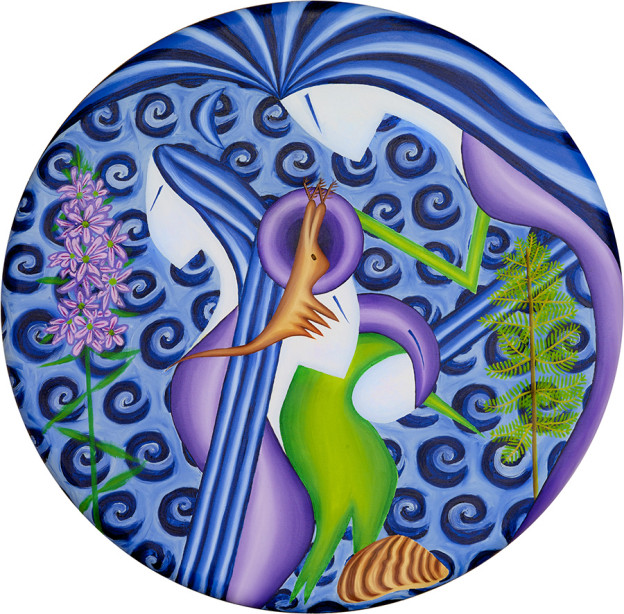 Chicago-based artist and scientist Hunter Cole is recognized internationally for producing work that is inspired by science, but lives as art. Cole who holds a PhD in genetics, reinterprets science through art. Cole ’s art includes paintings, photography, digital art, and living art using bioluminescent bacteria. She is a Lecturer at Loyola University Chicago. Cole holds a Ph.D. and Master's degree in Genetics from the University of Wisconsin-Madison, and a Bachelor of Science from the University of California-Berkeley. At Loyola University Chicago Cole created a course, Biology through Art, where students work to create art in a biology laboratory. Cole completed a residency during the summer of 2015 at the SymbioticA lab at the University of Western Australia in Perth. SymbioticA is the first research laboratory of its kind, enabling artists and researchers to engage in wet biology practices in a biological science department. While at SymbioticA she began work on her current project, Life with Endometriosis, which focuses on endometriosis and its affects of women living with the disease. Endometriosis causes endometrial tissue to grow outside the uterus in other parts of the body. Endometriosis can result in extreme pain and infertility. One in ten women have endometriosis. Cole’s art has been shown in New York, San Francisco, the United Kingdom, Italy, Japan and the Czech Republic. Hunter Cole co-authored the paper, “Art and Genetics” with Joe Davis, Dana Boyd and Marek Wieczorek, published in the Encyclopedia of Life Sciences (ELS). She has been the subject of numerous newspaper and magazine articles, and has been included in such publications as: Science, The Scientist, the Chicago Tribune, Detroit Free Press, Muy Interesante (Spain), Le Monde, and Beaux Arts magazine (France). Additionally, Hunter Cole has presented seminars on art and science throughout the United States and internationally including: the School of the Art Institute of Chicago (SAIC), American Museum of Natural History (New York), Massachusetts Institute of Technology (MIT), Dialogue Between Science and Art Workshop in Hluboka, Czech Republic, and SymbioticA at the University of Western Australia in Perth, Australia. www.HunterCole.org View all posts with Hunter Cole →