Without accomplishing one large drawing a day – usually a watercolour – I start to worry. It is part of a studio routine, a way to begin. It doesn’t need to be tied to a source – occasionally I draw a plant, a view – but normally I just pick the colour, the brush, the tempo. I also work small. The idea for this travelling sketchbook was simple: to have a pen drawing on the left, and a responding felt-tip drawing in colour on the right. It keeps my hand in when away from the studio or the computer. 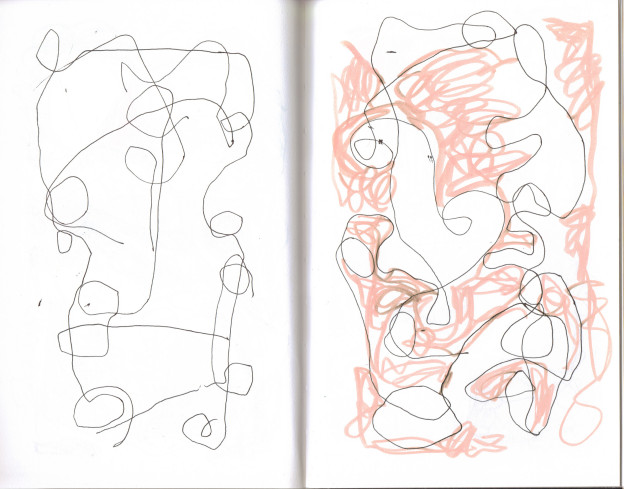 I had a conversation with a senior watercolourist, someone who abandoned what he called ‘modernism’ in favour of a laborious form of portraiture. I had noticed that he worked with small touches, the paper pinned vertically, quite a risky method. He said there were really only two ways of using watercolour: very fast or very slow. He took weeks. I resolved to work vertically, but fast. No hesitating, no revising, living in the moment. Be prepared to fail. When it comes to working on paintings, oil paintings, I slow down, but aim for a similar freshness. 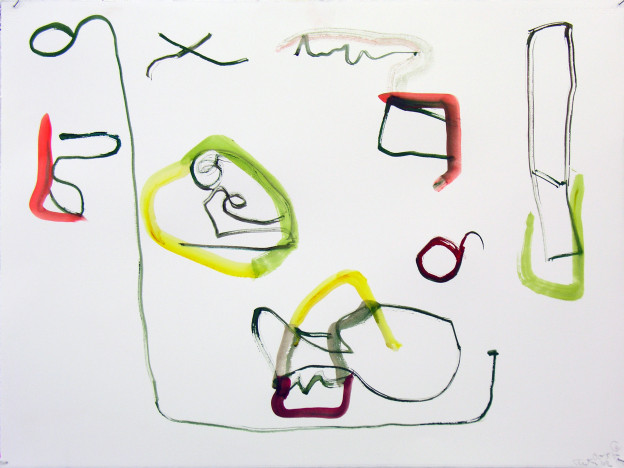 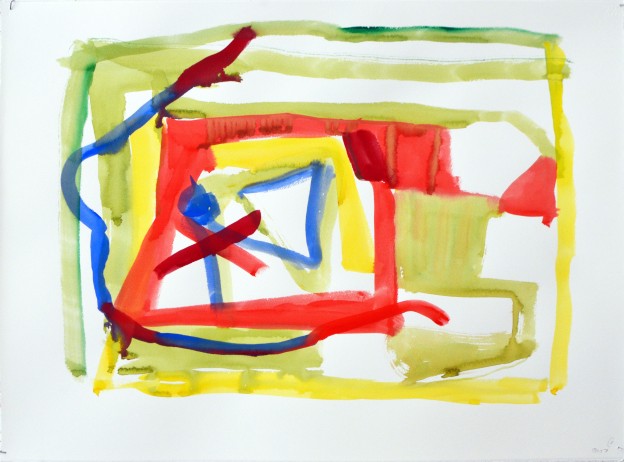 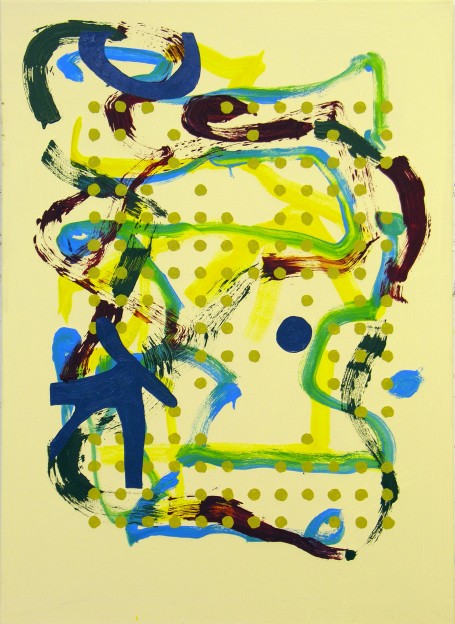 I had taken several photographs of flights of lapwings at Minsmere. My first thought was to use their silhouettes in a mural project. I did not get anywhere with that commission, but I knew I could play around with the patterns of their flapping wings. I mixed them in with some leftovers from drawings, for a large print. All the ingredients were created and mixed within a paint program. The London Group was holding an auction, and for the second time I volunteered to make the tickets. This required a complex picture that could be sliced into 120 different tickets, each with its number printed on the reverse. So it had to be busy. At the last minute I accidentally superimposed a smaller copy over it, but immediately realised this was much better. 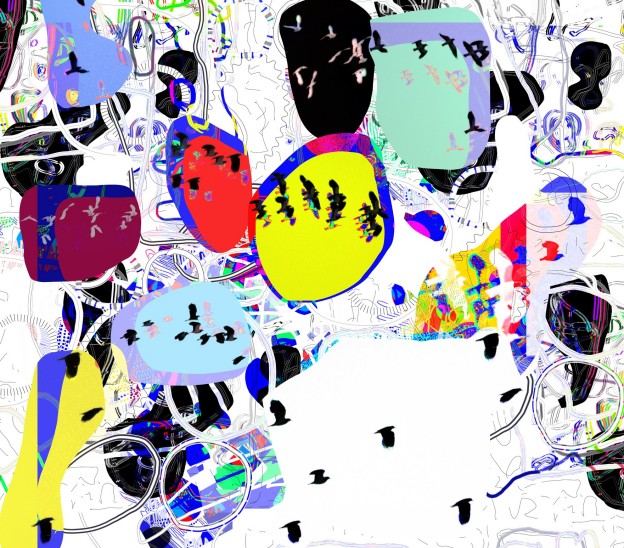 ‘Art Workers’ Table’ is also a print – or drawing, depending on your point of view. A reception at the Art Workers’ Guild required four throwaway tablecloths. These cream-coloured sheets were a good way of buying large squares of paper. They were already crumpled, which added to my interest. I flattened them out on my studio floor and rapidly painted a series of repeating motifs in violet acrylic. I photographed sections, using the frame and the close-up to crop and re-orientate the motifs. The afternoon sun shone across the wrinkled paper, with the window bars adding to the design. I assembled scores of these photos in a digital canvas, without altering them too much. After several false starts, I drew over them again, with a customized brush, in a bluish network. The overall feel is similar to the painting, ‘Once Ambition’s Airy Hall’. Working on the two simultaneously allowed motifs to flow between the registers of drawing, painting, and digital processing. That painting, which is much larger, has a few half-hidden tricks in it, such as repetitions, but was really a reworking of something started, and left some 22 years before. A way of creating the necessary distance, you might say. 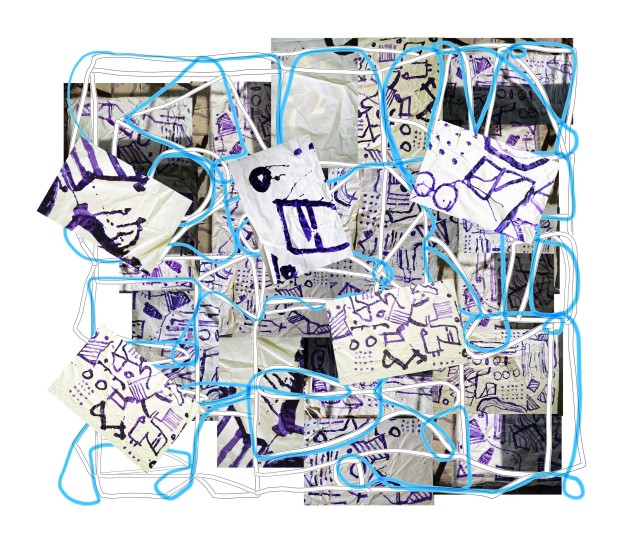 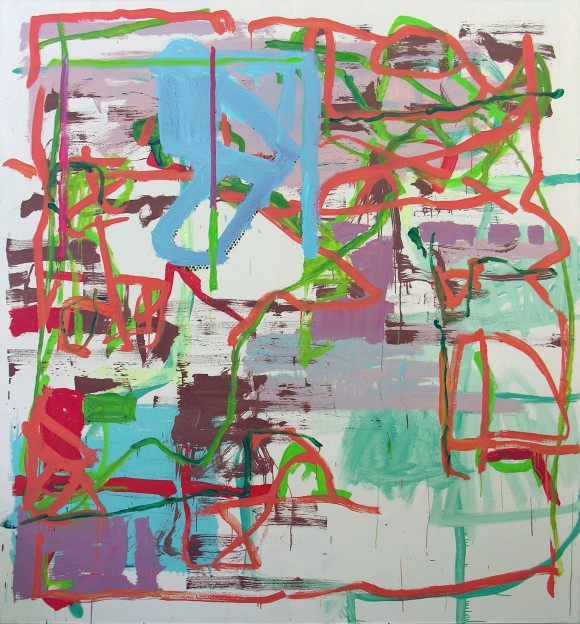 Does a drawing need to look like a drawing? Well, it does and it doesn’t. What really interests me is the life of the line. So whether it arrives in pen, gouache, oil paint, via a paint program, or even the trace of a pigeon in flight, whether it is self-consciously ‘drawn’, all that is secondary. A line is a line: straight, curved, loose; scratchy, wiggly, tentative; dutiful, lazy, controlling; dirty, crazy, voluptuous. Drawings can be like piano studies, going through the motions, stretching the whole keyboard. You never know what you will find. But to get anywhere at all – and this is an oft repeated truism – you have to practise. And look, and look again.