• something regarded as worthless; rubbish, junk

• something that is base, trivial or inferior 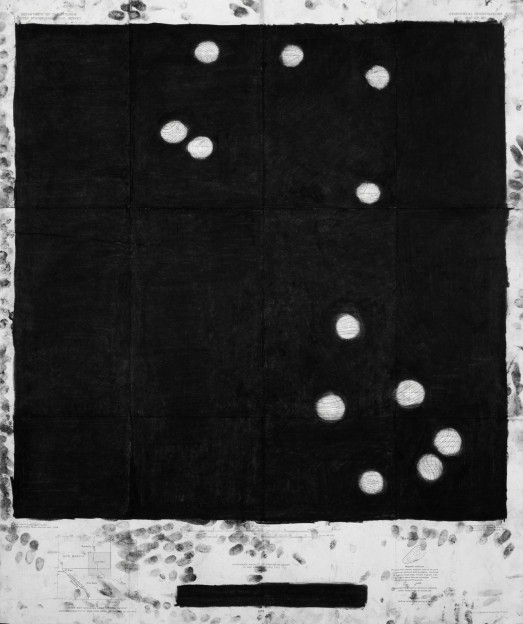 Topographic maps discarded by the University of New Mexico Library were used as the substratum for a drawing series, Blacked-out Maps, using charcoal to erase all information except one system. This revealed “constellations” of phenomena or human constructs such as sinkholes, mud deposits, trailer parks, flood control dams, mining pits, and other drosscapes. The drawing Intermittent Lakes and Sinkholes in the Carlsbad Region of New Mexico, occluded all information on the map except the areas that mark the karst permeability where intermittent lakes and sinkholes form. Over time, another series developed, Geological Map Drawings, in pencil and acrylic paint on geological maps, using a process that superimposes two systems: dots and a harlequin grid. These marking systems selectively highlight or occlude specific information on the maps. By marking-out data content is drawn out of the maps themselves unearthing hidden patterns in the landscape. This procedure also sheds light on the biases inherent in cartography, drawing out questions about what and how information is included or excluded. Maps are generally thought of as objective truthful documents, however political agencies, social value systems and other power dynamics influence their content. Subjective and fluctuating information finds its way into maps on a regular basis. By exposing hidden subjectivities, these drawings open up the channel between the map and its construction as fact. This practice puts into play pattern recognition, exploring the ways in which the earth is transcribed and abstracted. Maps are powerful and often political tools by which the earth, its morphology and topology is inscripted. 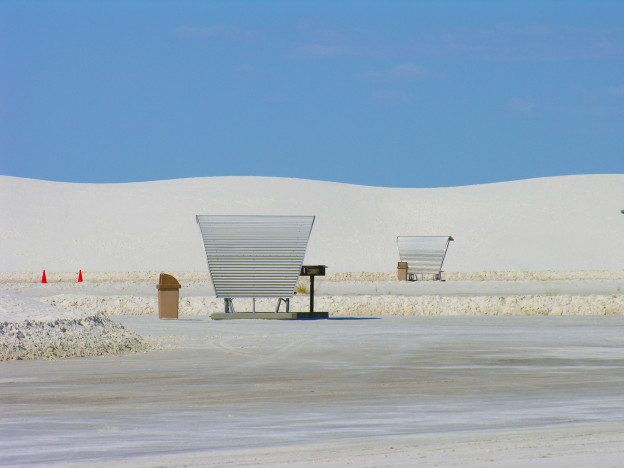 Fieldwork road trips play a significant role in my research process. During one particular road trip I left the radio tuned to 100 AM, to actively listen, without judgment of sound quality, the radio waves crossed during this journey. Driving alone through desolate landscapes, urban areas and drosscapes, the radio faded in and out, sometimes signals crossed, superimposing stations and static interruptions.  A deep map soundtrack to the landscape emerged. Periodically, I would stop to photograph. This performative project and field experiment had a duration of three weeks, and is titled Drawing a line through the airwaves. 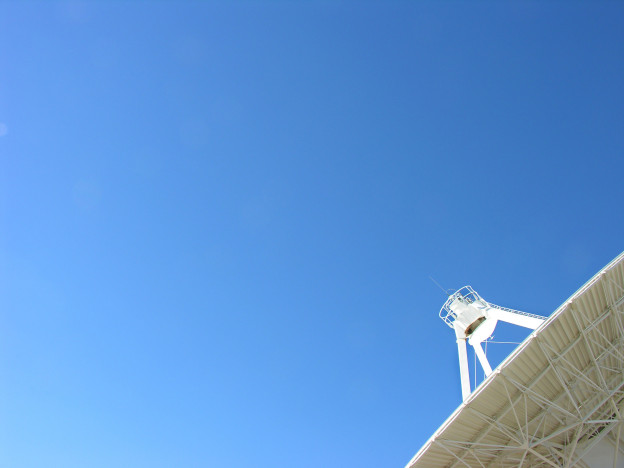 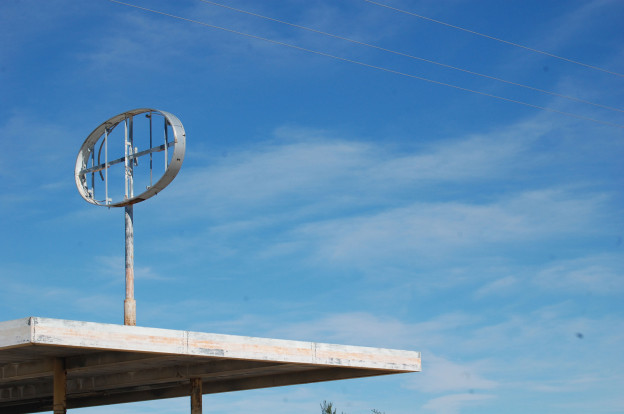 Dross: the fallacy of desert as waste land

In the desert, water is sacred because it is scarce. It forces us to change behavior. It teaches us to share. My sight improves in the desert – both close and distant vision. I have no rational explanation for this, but have experienced it many times. Something about the horizontality, perhaps it has to do with the ability to see the curvature of the Earth. The focus shifts to tiny, resiliant life forms: lichens on lava flows, and tough desert plants that store up all their energy for years to explode into full bloom when the rains finally come. Big black beetles moving herky-jerky across the sand. Reptiles. The ravens and raptors so keen and canny and chatty. The way one can see geological time in the stones and strata. It sets the record straight for me. I love it all – these arid lands. There are so many astonishing things I’ve witnessed in the desert. Meteor showers. Lava caves near Zuni with ice in them all year long. Hundreds of thousands of bats flying out of Carlsbad Caverns at dusk in a tornado-like spiral. Orchestras of cicadas blasting their songs; their clumsy flight, the shedding of their exoskeletons. Watching the weather move in, then a fierce electrical storm. Then watching the weather move out. I’ve chimneyed up a vertical passage deep underground at Lechugilla Cave and was eye-to-eye with a cluster of crystaline selenite needles that took tens of thousands of years to grow – like a little puff of mineral smoke – you could see right through it. I once saw a moonbow in the Guadalupe Mountains – an uncanny atmospheric phenomena. Staggering with the Milky Way as the celestial backdrop. 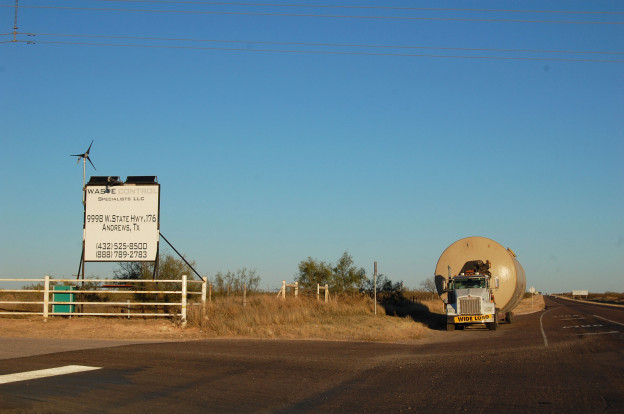 Many of these road trips are to nuclear legacy sites. WIPP it Good: How Long is Forever?is an interdisciplinary project that investigates thehistorical implications of the Waste Isolation Project Plant (WIPP), a deep geological nuclear waste storage facility. WIPP is located in a salt formation of the Ancient Permian Sea, located 26 miles from Carlsbad, New Mexico. The repository consists of miles of tunnels excavated in the salt where barrels of waste are entombed 2,150 feet underground. The Carlsbad karst topography is riddled with caves, sinkholes and intermittent lakes. The project examines the site, the surrounding topographical context and the  relationship between above and below. 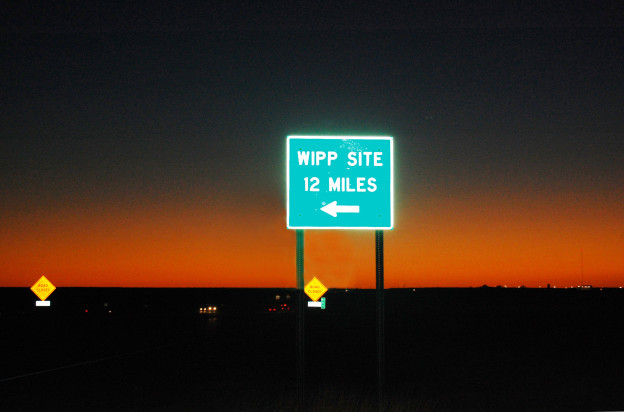 WIPP was originally designed as a temporary pilot program – a test balloon – for long-term deep, geological storage of transuranic (TRU) radioactive waste. In 1999 the Department of Energy and Los Alamos National Labs (LANL) began storing TRU-waste at WIPP. Fifteen years later, in February 2014, there were two accidental releases of radiation into the atmosphere. After an investigation the DOE, LANL, and the Carlsbad Environmental Monitoring and Research Center determined LANL technicians used kitty litter as an absorbent in the barrels, causing a chemical reaction, blowing the lids off waste barrels, and releasing plutonium-239 and plutonium-240 throughout the underground ventilation system, and into the atmosphere. At least 17 workers were contaminated, as well as citizens in Carlsbad.  It is significant that a storage site designed to last for eternity leaked 15 years after it was built. 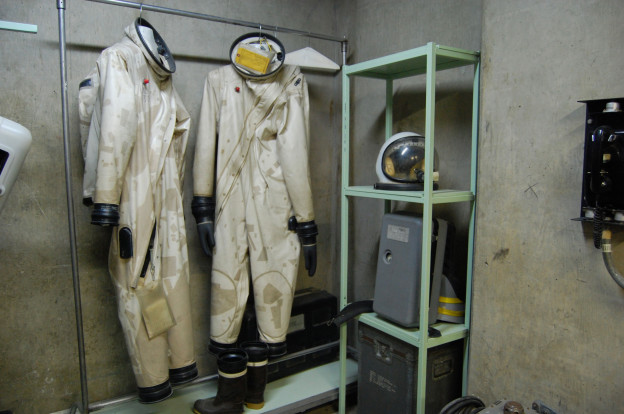 That the WIPP site is located in a salt formation of the ancient, 250 million year old Permian Sea is interesting metaphorically and symbolically. Salt in the proto-science of alchemy represents a female principle, and designates a sacred space. There is a chemical correlation between our blood and saltwater, a subject I investigated years ago in my installation, Cellular Memories. The ocean is in our veins. 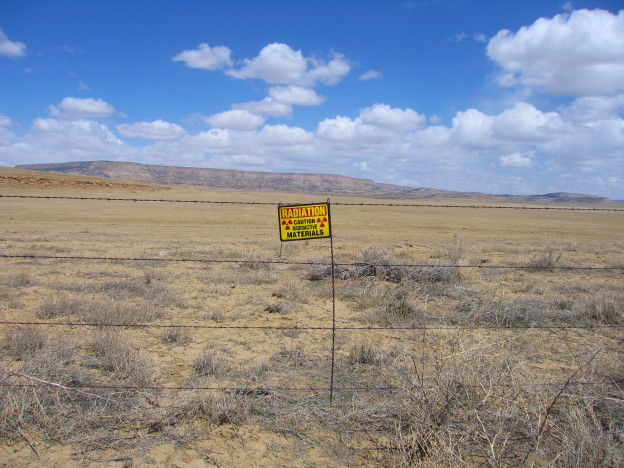 WIPP it Good: how long is forever not only addresses the inevitability of nuclear accidents, but simultaneously proposes a ritual healing. Salt heals wounds. Salt is used in the preservation of food, sustenance. In alchemy, the bitterness of salt represents learning through suffering. Bitterness is historically associated with medicine. Salt also purifies. After blood was used to sanctify places, salt was used to bless altars and sacred spaces. Salt represents wisdom, as in the “salt of the earth.” The WIPP salt will not cure the site of its toxicity, but may serve as a bitter reminder that we must heal our own interconnections with the environment. 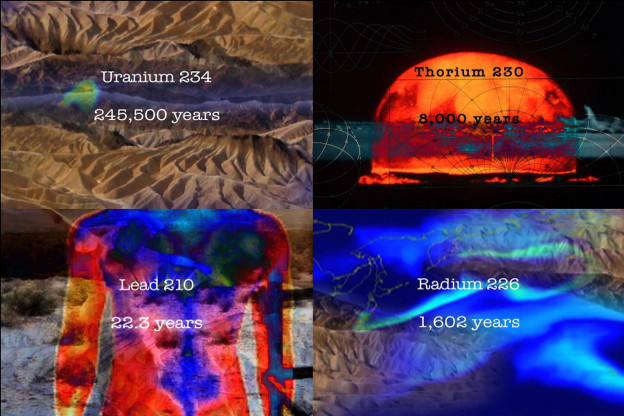 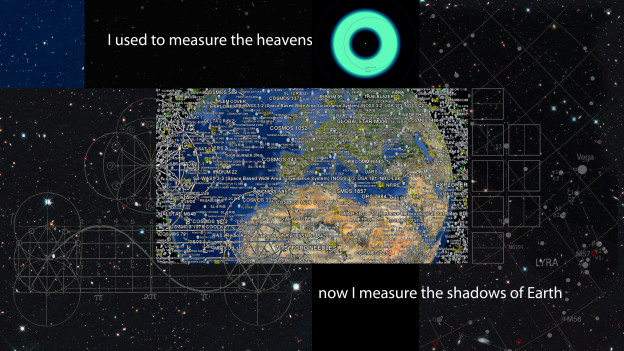 “I used to measure the heavens, now I measure the shadows of the Earth” wrote the he 17th Century astronomer and mystic, Johannes Kepler. The installation, Waste of Space, points to the poetic science of Kepler who decentered the world through his radical theories of astronomy and harmonics. Contrasting his cosmology of harmonic interactions of celestial bodies, with the disharmony of colliding space junk, the work layers images from his treatise, Harmonices Mundi, onto footage from the Kepler Space Telescope, launched to search for habitable Earth-like planets. Thorough this palimpsest, a third layer of meaning is created: the problem of radioactive orbital debris. 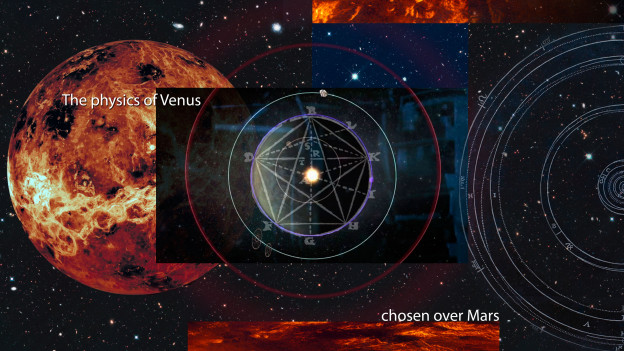 During the Cold War nuclear weapons buildup, U.S. President Eisenhower announced the 1953 Atoms for Peace program launching the international nuclear energy industry; the alleged use of atomic power for peaceful purposes. By 1955, the Cold War escalated into a race to control space, when both the US and USSR announced their intentions to launch artificial satellites. Sputnik 1 and 2 were launched by the USSR in 1957, followed by the US launches of Explorer 1, 2, Vanguard 1, and Pioneer 1 in 1958. The first space probe with a nuclear power system, a radioisotope thermoelectric generator (RTG) containing plutonium, was launched in 1961, and dozens have been launched in subsequent decades. Several of these objects have reentered the atmosphere, crashing to Earth, distributing radioactive materials on land and in water. Currently there are over 100 million human-launched radioactive particles of space junk in Earth’s orbit. 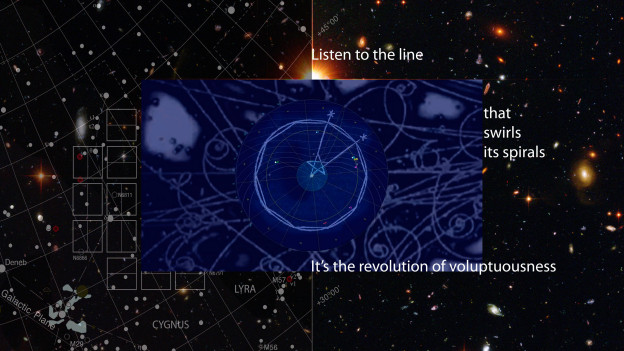 I’ve never been an early riser. One morning in January 2015, I woke before sunrise. It happened to be my birthday. I decided to watch the moon set, watch the sunrise, watch the sunset and watch the moonrise. The concept and challenge was to focus on the specific task of paying attention to planetary time, space and motion. At no time during that day did I feel like I was wasting time.

Eve-Andrée Laramée is currently a Professor and Chair of the Department of Art at Pace University in New York City. Laramée is an ecological artist working at the confluence of art and science. She has exhibited throughout the United States, Europe, Asia and the Middle East, including amongst other institutions, the Venice Biennale, Mass MOCA, Massachusetts Institute of Technology (MIT), and the New Museum of Contemporary Art, New York. Her work is included in the collections of the MacArthur Foundation, the Museum of Modern Art, New York, The Fogg Art Museum of Harvard University. Laramee’s research investigates the impact of nuclear power and fossil fuels on ecosystems, climate and human health. Current projects focus on the problem of radioactive waste which persists throughout geological time. Sources are uranium mining, nuclear weapons and energy production/decommissioning, and nuclear accidents. She has collaborates with physicists, hydrologists, geologists, biogeographers, and ecologists. Her art-and-science projects catalyze positive social change by promoting an awareness of environmental health issues and by directly involving communities. The outcomes share innovative thinking, extending the ways in which cultures imagine, create and understand. View all posts with Eve Andrée Laramée →