As an artist, my work has long centered around drawing as process and practice, and over the past two decades has ranged over various mediums, from ink and resin on paper to cameraless photography and sculptural installation.  Currently, I am making drawings that flout the traditional separation between line and color in Western aesthetics and explore the possibilities inherent in my own incredibly flawed system of color investigation. 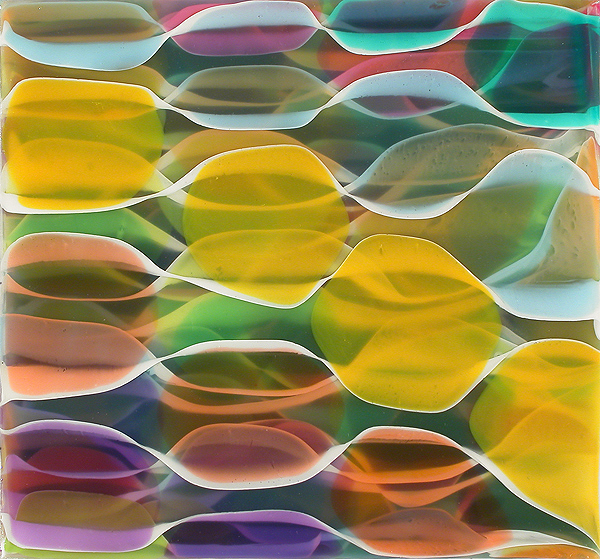 The opposition between line and color dates to the ancient Greeks (Aristotle) and through the renaissance (Florence versus Siena), and pits drawing against color. Drawing was traditionally associated with the higher, the rational, and the spiritual, while color was seen as “merely” artifice, false, and anti-rational.  It gets worse:  “Since Aristotle’s time, the discrimination against colour has taken a number of forms, some technical, some moral, some racial, some sexual, some social.  As John Gage notes in his vast historical survey of color theory, ‘color has regularly been linked with other better documented sexual and racial phobias.’ “1  This prejudice has been described as chromophobia.2  After many years of working primarily in black and white and focusing exclusively on line, I began to question why I was avoiding color. I decided it was time to find a way to combine my drawing practice with color exploration. 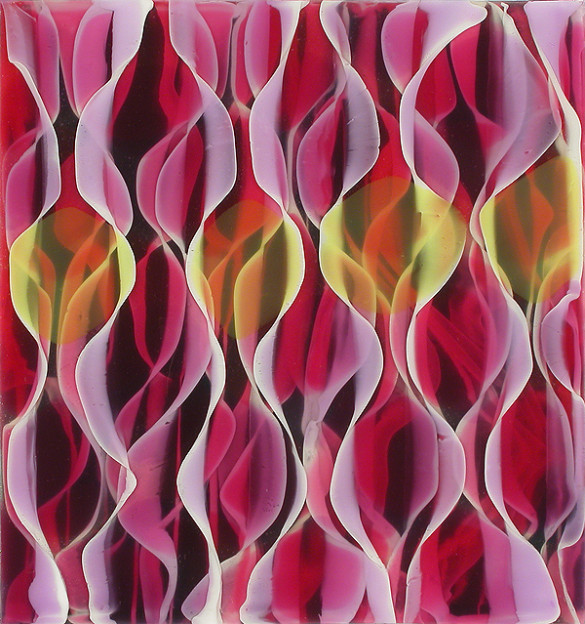 Subsequently, about four years ago I began using color systematically, in a way that reflects my interest in how the perception of color has changed as technology has advanced. In the digital world, color has been liberated from nature, sunlight and the physical world, and has instead become pure technological light.  For example, there are two colors, ultraviolet and infrared, which are invisible to the human eye.  “Both…are synthetic colors whose very existence foregrounds the centrality of machines and information systems in modern perception.”3  These two colors cannot be seen by us unaided (though bats and snakes can sense infrared, and bees use ultraviolet to guide them during pollination.)  On the other hand, color remains pharmakon, “[to] say that color is pharmakon is to say that color is and always has been a kind of technology…. Color used in cave painting is still a matter of chemistry….Whether through its ochers, its minerals, or its silicon graphics chips, colors, dirt and matter connects us, however reluctantly or ambivalently, to technics and artifice, just as it does to metaphysics and theology, politics and idealogy, and the depths of the darkness of the earth, the world of chaos, eroticism, and Dionysian ecstacy.”4 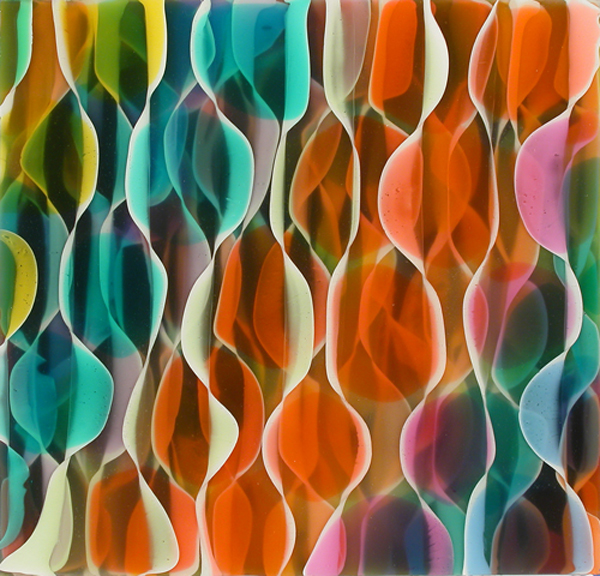 As Josef Albers famously noted, “[i]f one says ‘Red’ (the name of a color) and there are fifty people listening,  it can be expected that there will be fifty reds in their minds.  And one can be sure that all these reds will be very different.”6   As receptors, we all perceive color differently, depending on our genetic make up and the physical characteristics of our own eyes and brains, as well as our own personal histories and cultural associations.  It is doubtful whether any computer or mathematical model will ever get close to matching our own color associations.  “[I]n reality colors do not even exist….The simplist way to think about colors is to consider them as ideas.”7 Just as countless color theorists in the past attempted to rationalize color, there is no resolution of the problem of color now, either. Color is not a problem to be solved, but rather “a perplexity that doesn’t blow away.”8 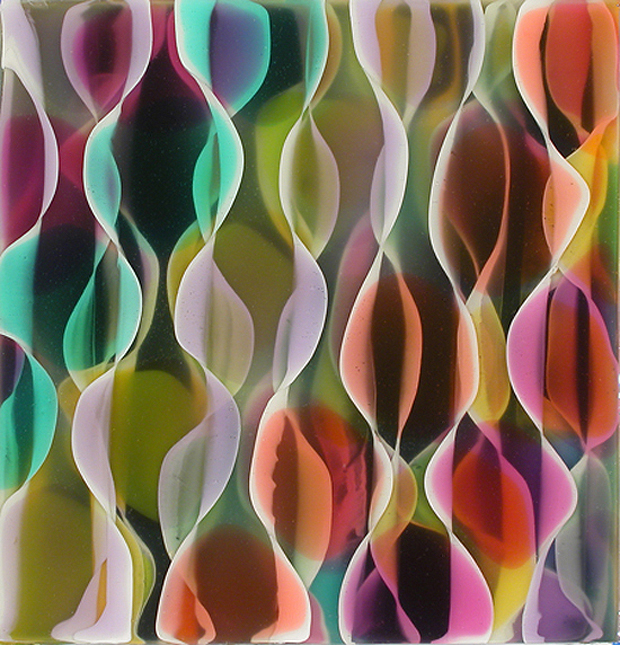 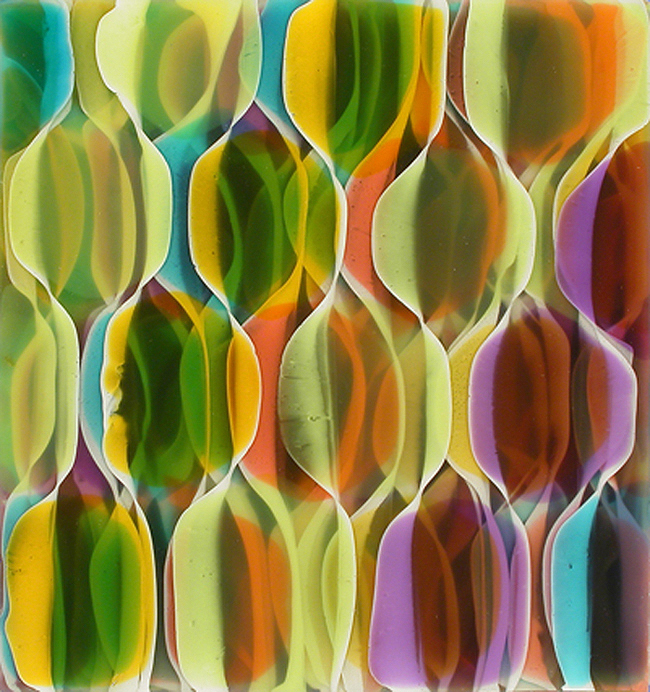 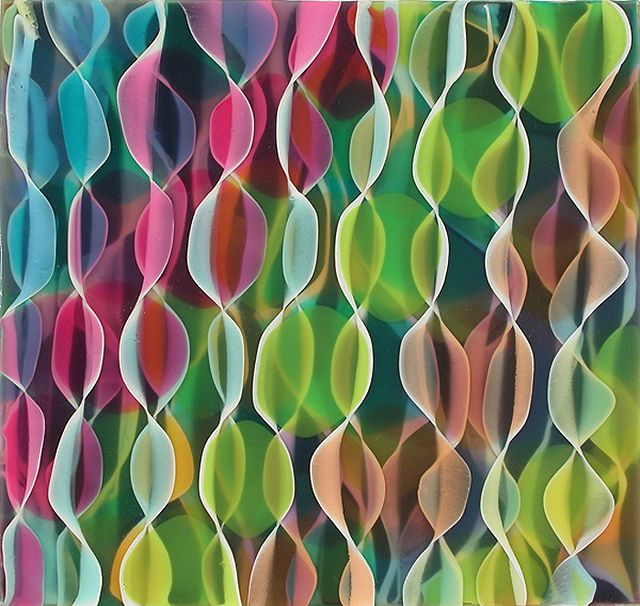 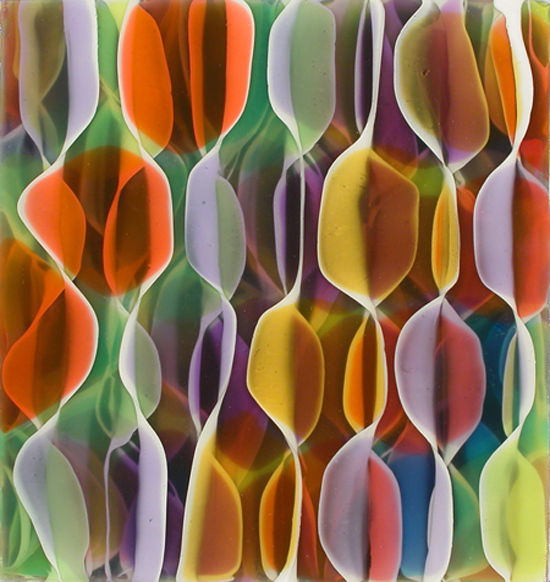 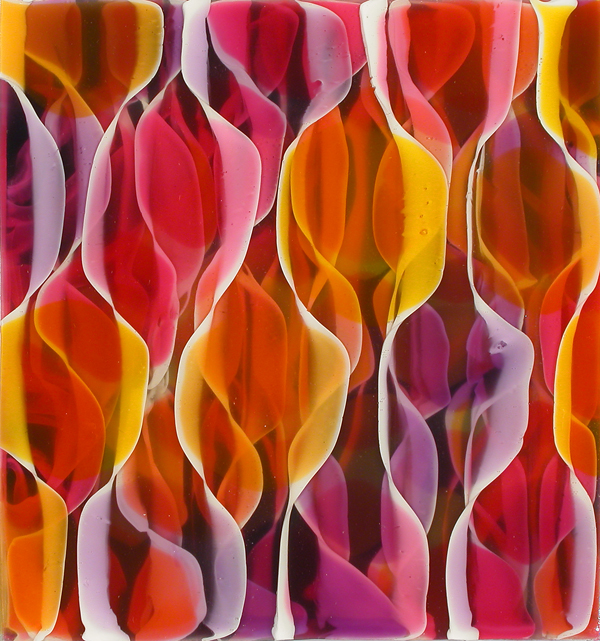 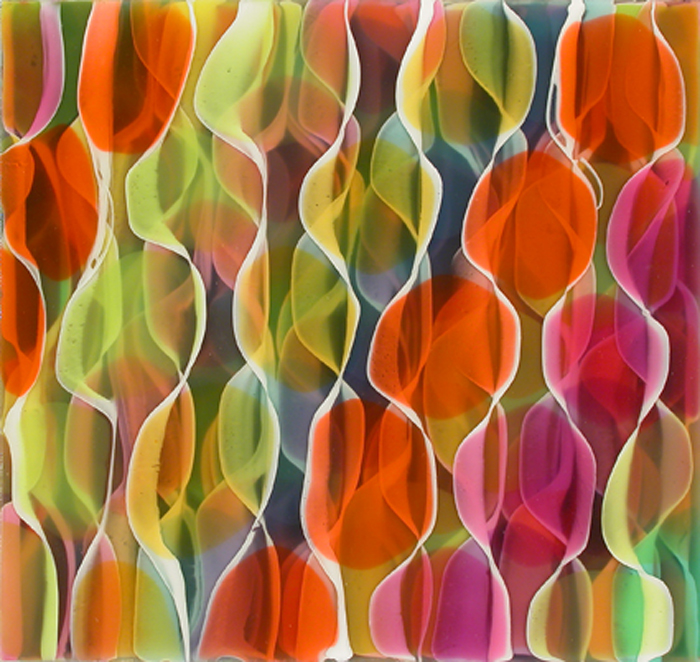 Colors may all have their specific wavelengths, but there is no wavelength for perception, and color remains dangerously seductive and elusive.  The first colors we recognize as babies are shades of red; a nipple, the color of a mother’s or father’s mouth as they speak, therefore it is hard to get around the fact that our color preferences are hard-wired in our brains, as much as we might like to think otherwise.  Genetics is a new path of research into color, new systems investigate the physiology of perception, connecting the dots between the celluar structure of the brain and color perception according to genetic make up and culture. But even “such a genetic color system could never be completed definitively….The boundless diversity of color exceeds the limits of every closed system.”9 In fact, “[e]very color system…represents one more in an ongoing series of unsucessful attempts to capture the free kaleidoscope of colors in a geometrical cage.”10  The greatest promise lies in the future creation of a perfect “open system,” that would be flexible in its structure and able to incorporate new information as discoveries are made in the fields of genetics, psychology and physics. 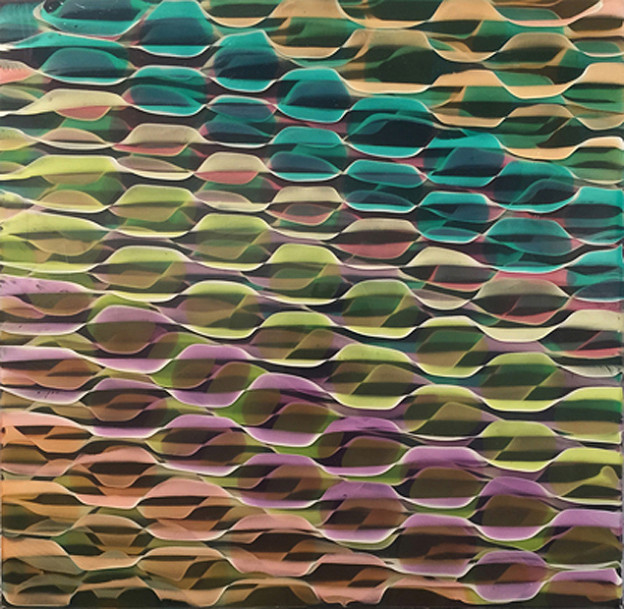 So while understanding the perpetual failure of attempting to systematize color, as well as the dangers of being seduced by it, I decided to create my own system, knowing full well that given the nature of the endeavor, my system, just like any other, would heat up, break down and short circuit itself in no time.

While I am still drawing – it is a simple process of laying down ink lines in a slow, repetitive, meditative way – I have created a color system for myself that is paradoxically very ordered and yet completely open to chance.  As I draw, I add in a very limited and rotating number of pure, unmixed inks in a repeating but random order.  In the end, the optical mixture of these many-layered colors creates a surface as well as a depth; the lines twist and turn in a way that is both gestural and geometric.  In this way I create complex, unrepeatable patterns and combinations using the most simple, rudimentary rules that invariably get broken. 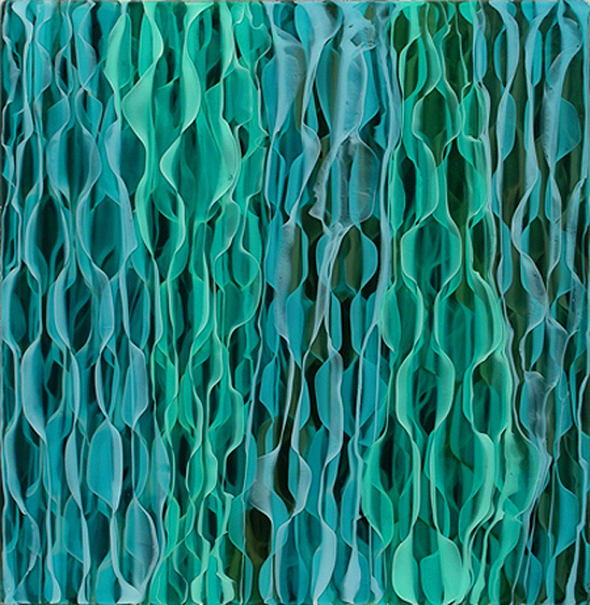 I sometimes work in “blind rotations,” in which I limit the colors to a certain number, with no repetitions, and cannot see the colors underneath the layer I am working on. At other times, I work in “cancellations,” and layer complementary colors, in an attempt to create greys, or conversely, I do not put complementary colors next to each other either horizontally or vertically, which drastically limits my options.  When dry, the transparent colors combine to create unforeseeable and surprising results. This simple yet complex rules-based process I have created ends up being a kind of Sudoku with color. The drawing surface is one of layered depth where system and dysfunction, structure and dissolution, order and chance all play out in unexpected ways.  And so, rather than solving the “problem” of color, I remain happily lost in its perplexities. 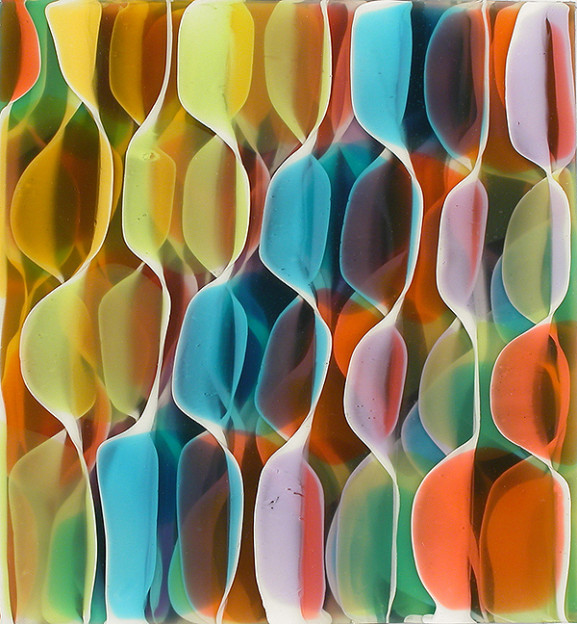 Maureen McQuillan is an artist based in New York and has been exhibiting her work for two decades, both in the U.S. and internationally, including eight solo shows (New York, Baltimore, San Francisco and Paris). Her most recent solo show was entitled “Process Color” in 2015 at McKenzie Fine Art in NYC. Group exhibitions include: The Weatherspoon Art Museum, Greensboro, NC; The Contemporary Museum, Baltimore, Maryland; The Drawing Center, NY; The Islip Art Museum, NY; Herter Gallery, UMass Amherst; The College of New Rochelle, NY; the John Michael Kohler Arts Center, Wisconsin; and Le VOG Contemporary Arts Center, Fontaine and The College of Art and Design, Grenoble, France among many others. McQuillan's work has been mentioned and reproduced in The New York Times, Newsday, The Boston Globe, TimeOut, The San Francisco Chronicle, San Francisco Examiner, ARTnews, Architectural Digest and Art on Paper, and her work is held in private and public collections all over the world. Maureen McQuillan is represented by McKenzie Fine Art in New York. View all posts with Maureen McQuillan →