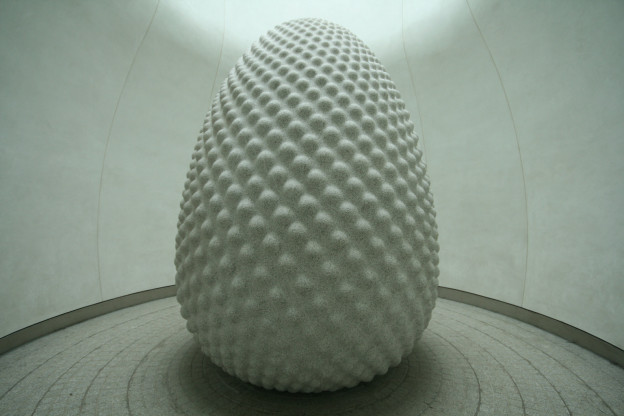 Richard Bright: Your work is informed and inspired by botanical and other natural forms, but there’s also this blurring of boundaries between the botanical and the zoological which creates an ambiguity. Is that intentional?

Peter Randall Page: For me, it’s not only a blurring between the botanical and the zoological, it’s also a blurring between the organic and the inorganic. My work developed from being interested in looking at things and how they fit together, the patterns and disorders, in both organic and inorganic phenomena. When I came across D’Arcy Thompson’s seminal work ‘On Growth and Form’, his ideas resonated enormously; that was a long time ago. I think, even as a child, I’d been fascinated by the way in which patterns reappear in many disparate contexts, almost like a pattern book of forms. Things like hexagonal packing, for example, which you find in the Giant’s Causeway and also in honeycombs, the spiral shapes of galaxies, the flow patterns of water, snail shells, and numerous other things. A gradual recognition that there is a quite limited vocabulary of forms that, combined with a ubiquitous tendency for random variation produce the shapes we see around us. This tension drives the evolutionary process itself. You couldn’t imagine an evolutionary process if there was only spontaneous pattern formation and no random variation; it would be stasis, nothing would change. Equally, one can’t really imagine random variation without structure; variation without theme, I can’t even think what that would be. Those sort of realisations, gradually dawned on me over a long period of time. I began studying through looking and playing with form. 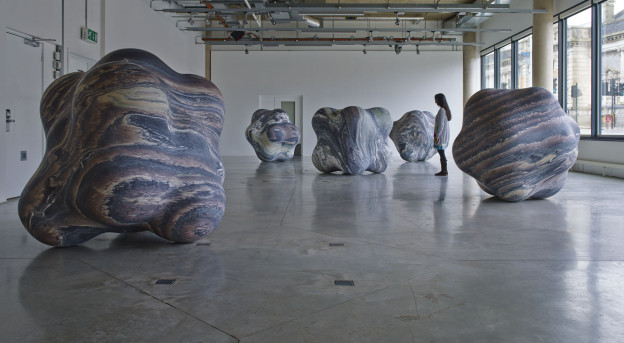 Peter Randall Page: Shapes in the Clouds I – V

For example, the pieces that I showed in Plymouth recently (Shapes in the Clouds) explore what happens when spheres are stacked together. Stacking them in a systematic way and putting them where they naturally fit, one ends up with curvaceous versions of the five Platonic solids. These forms are absolutely fundamental. It seems to be the spatial terms of the universe. I read something recently, written by a physicist, who said that we think of space as a passive receptacle for form, but in fact, space is a determining principle. I’m not a scientist, I’m not a mathematician, but you can’t get interested in the world around you without finding yourself involved in mathematics; because fundamentally mathematics is the study of patterns.

RB: A classic physics statement is, ‘matter creates curved space, and curved space tells matter how to move’, that combination of the two.

RB: This underlying aspect of reality is determined in randomness, and your work focuses on that tension and dynamics of the relationship between order and randomness.

PRP: Yes, definitely. It certainly is fundamental to how I’ve come to think about things. As a child, I was a great one for collecting shells and seeds and all sorts of bits and pieces; looking at them through a magnifying glass and seeing the extraordinary perfection of patterns. At the same time I became aware of the ‘making do and getting by’ that nature’s so good at; going down to a smaller and smaller scale. Of course, the same applies on a macro scale as well.

RB: There’s also the idea of theme and variation. Can you say something about this?

Peter Randall-Page was born in the UK in 1954 and studied sculpture at Bath Academy of Art from 1973-1977. During the past 25 years Peter Randall-Page has gained an international reputation through his sculpture drawings and prints. He has undertaken numerous large-scale commissions and exhibited widely. His work is held in public and private collections throughout the world including Japan, South Korea, Australia, USA, Turkey, Eire, Germany and the Netherlands. A selection of his public sculptures can be found in many urban and rural locations throughout the UK including London, Edinburgh, Manchester, Bristol, Oxford and Cambridge and his work is in the permanent collections of the Tate Gallery and the British Museum amongst others. His practice has always been informed and inspired by the study natural phenomena and its subjective impact on our emotions. In recent years his work has become increasingly concerned with the underlying principles determining growth and the forms it produces. In his words "geometry is the theme on which nature plays her infinite variations, and can be seen as a kind of pattern book on which the most complex and sophisticated structures are based." He was awarded an Honorary Doctorate of Arts from the University of Plymouth in 1999, an Honorary Doctorate of Letters from York St John University in 2009, an Honorary Doctorate of Letters from Exeter University in 2010, and an Honorary Doctorate of Letters from Bath Spa University in 2013. As a member of the design team for the Education Resource Centre (The Core) at the Eden Project in Cornwall, Peter influenced the overall design of the building incorporating an enormous granite sculpture ('Seed') at its heart. Commissions include 'Give and Take' in Newcastle which won the 2006 Marsh Award for Public Sculpture, 'Mind's Eye' a large ceramic wall mounted piece for the Department of Psychology at Cardiff University (2006) and a commemorative sculpture for a Mohegan Chief at Southwark Cathedral (2006). Recent projects include ‘Harmonic Solids’, Karlsruhe University, Germany (2013), ‘Metamorfoz’, Eskisehir, Turkey (2011), ‘Ridge and Furrow’, University of Iowa, USA (2011), ‘Walking The Dog’, Dulwich Picture Gallery (2009), a bridge for the garden at Dartington Hall (2011) and a major one-person exhibition in and around the Underground Gallery at the Yorkshire Sculpture Park (June 2009 - April 2010). View all posts with Peter Randall-Page →