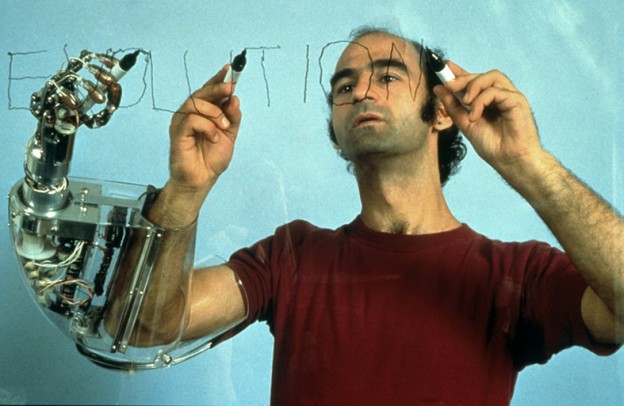 Richard Bright: You announced at the beginning of your artistic career that “The human body is obsolete”. What prompted this?

Stelarc: The realisation that the body is obsolete was the outcome of the initial exploration of the physical and spatial parameters of the body through sensory deprivation and physically stressful performances, as well as visual probing the internal spaces of the body – having filmed three meters of the inside of the stomach, the left and right bronchi of the lungs and the colon. I had also begun suspending my body, stretching the skin as well as its limits. These projects and performances exposed the body as occupying a small spectrum of physical, sensory and psychological experience. The body occupies a narrow window of sensation and survival. In addition, the body can neither perform with the precision, power, sensitivity or speed of its technologies nor manage the massive data streams of new information that it has to process. It is also obsolete in the technological terrain that it now inhabits. What should be stressed though is that asserting the body is obsolete is not alluding to any kind of disembodiment. It’s just that this body, in this form and with these functions is inadequate. We need to examine the evolutionary architecture of the body and consider ways of redesigning it. We don’t have to accept the biological status quo. The evolutionary strategies of birth and death are for population control and for shuffling genetic material to generate diversity in the human phylum. If we can do this artificially then the basic parameters of existence, of birth and death become unnecessary. If a fetus is brought to bear in an artificial womb, technically you come into the world without being born. And if we can stem cell grow, bioprint or engineer replacement organs, then a body can significantly extend its lifespan. Your life need not begin with birth nor necessarily end a biological death. That’s not to say your existence is guaranteed. Your life might still end at any time accidently or by some natural or technological catastrophe.

RB: Where did your idea of redesigning/enhancing the body come from? Do you think there is something wrong with the body as it is? 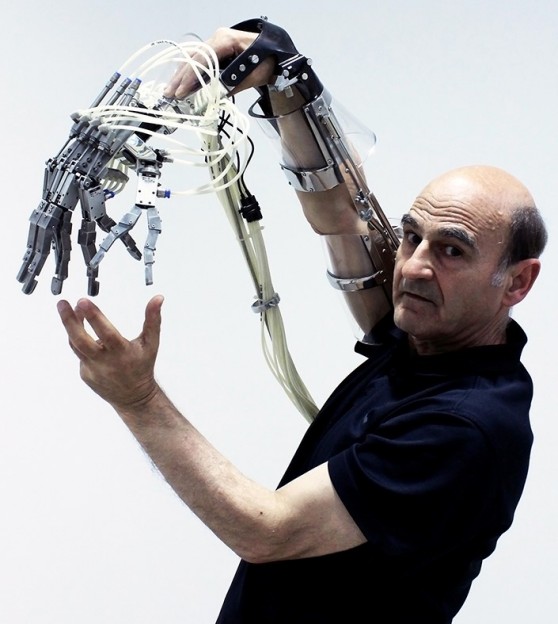 Stelarc explores Mixed and Augmented Realities. He has performed with a Third Hand, a Stomach Sculpture, Exoskeleton and a Prosthetic Head. He is surgically constructing and stem-cell growing an ear on his arm that will be internet enabled. In 2010 he received a Special Projects Grant from the Australia Council and was also awarded the Ars Electronica Hybrid Arts Prize. Publications include Stelarc: The Monograph, Edited by Marquard Smith, Forward by William Gibson (MIT Press 2005). Stelarc is currently a Distinguished Research Fellow and Director of the Alternate Anatomies Lab, School of Design and Art (SODA) at Curtin University. In 1996 he was made an Honorary Professor of Art and Robotics at Carnegie Mellon University, Pittsburgh and in 2002 was awarded an Honorary Doctorate of Laws by Monash University, Melbourne. His artwork is represented by the Scott Livesey Galleries, Melbourne. www.stelarc.org www.alternate-anatomies.org View all posts with Stelarc →