In Sugababe, we have regrown Vincent van Gogh’s ear. 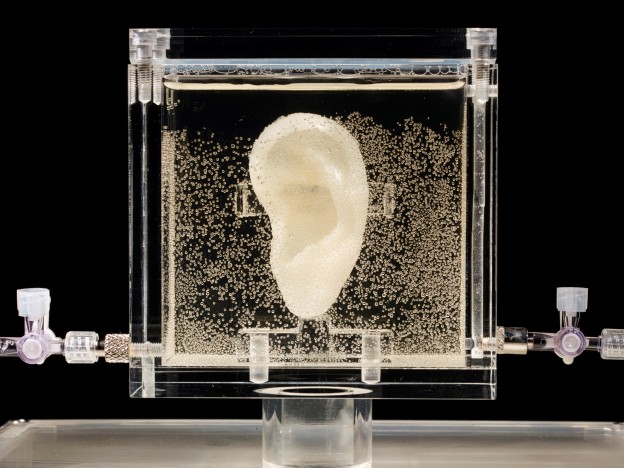 The ear is grown from tissue engineered cartilage and is not only ”identical“ in shape to van Gogh’s ear by using computer imaging technology, but it is also composed of living cells that contain natural genetic information about him as well as engineered components, replicating in the living art-piece.  The ear is white and looks like it is made from a granular sugar-like material.

Vincent van Gogh probably represents more than any other artist, the stereotypical romantic image of the artist as a genius. He fulfills the sentimental projections of a broad public about the artist being necessarily poor, sick or insane as a type of inevitable precondition for a true and authentic work. But even the more reputable positions in theory of art tend to a certain mystification and to predictable patterns in dealing with the exceptional position of artistic creativity compared to any other form of human innovations.  Art according to this position simply ‘appears’, becomes apparent and is not to be declared or explicable.

A philosophical paradox known as Theseus’s paradox forms the literary basis of the scientific approaches used in this art-project, that is the replacement of the genetic code at the molecular level, the cellular organization at the microscopic level and the composition of tissues and organs at the anatomic level, carried out as a „proof of concept“ in various ways and to various degrees of advances and evidence in the living art-piece. In the late 1st century, in The Life of Theseus, Plutarch asked whether a ship, which was restored by replacing each of its parts, remained the same ship. In the course of time many variations of the principle have been described. One of these variations refers to the title of the project. The famous paradox is carried out with biological material making a particular method of human replication from historical or synthesized material a central focus of this project.

Terms such as fate and nature seem to move through a kind of paradigm change, especially in life sciences. What was considered irreversible, such as the loss/failure of an organ, is increasingly becoming reversible. The various concepts that deal with, and influence our understanding as humans, are in an ongoing process of change and create other frameworks. This occurs not only in the field of tissue engineering for the design and regrowth of customized organs, to potentially improve and optimize natural functions or attaching new functions, but also in genetics, specifically synthetic biology, stem cell-research, brain engineering, etc.   We use representative genetic material in various scales of scientific advances and evidence to question the principle of irreversibility of the past as well as some features of death. A historical key-figure of art history is brought to life to a certain degree by involving, amongst others, advanced technology using a piece of his body that can stand as a symbol of what brought him to struggle and death. 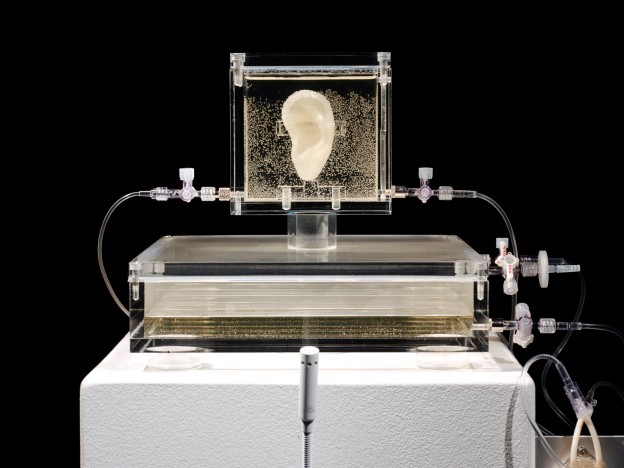 One can speak to the ear via a microphone system.  The input sound is connected to a computer processor, using a software program to generate simulated nerve impulses from the sound signal in real time.  They mimic sounds recorded from an electrode inserted into the auditory nerve. The crackling that one can hear represents nerve impulses fired by the auditory nerve, here used to outline absence instead of presence. The speaker remains in soliloquy.

The ear-project is a series of a limited edition, made of different scientific components, that refer to the same principle of replacement.

Presentation:   The living ear, bathed in nutritional fluid, is displayed at an average eye height inside a transparent glass cube which is placed on top of another glass case, both of which function as a transparent bioreactor. The bioreactor is the supporting system that provides nourishment and keeps the ear alive.

The 2 transparent cases, making up the bioreactor, are mounted on a white pedestal. Nutritional fluid will be pumped at a slow rate from the larger oxygen exchange chamber through the smaller ear chamber, thus nourishing the ear. A microphone system is attached to the chamber containing the ear. The audience can speak to van Gogh’s ear. 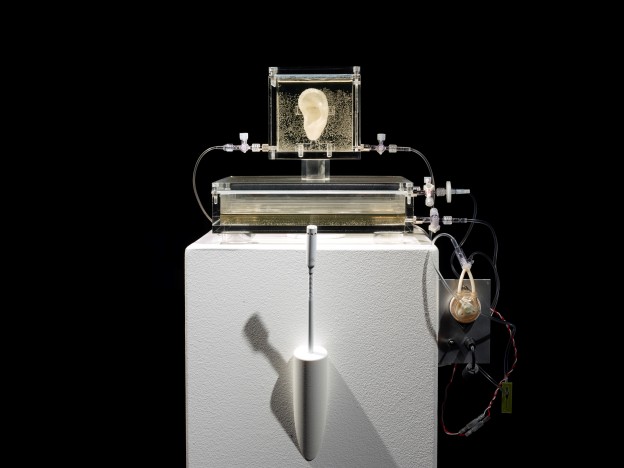 Foreign DNA has the ability to replicate in living cells if it is incorporated properly, and if such DNA can be expressed as RNA and its encoded proteins in that species. Replacement of new DNA that is present in living cells with segments of old DNA or synthesized segments of historic DNA can be used to recreate segments of DNA from a historical person that can be incorporated into living cells. By replacement of an entire genome a historical person could in theory be genetically “recreated” by inserting his or her DNA into the cell line of another human. The art-project works with this concept of replacement in various ways. The Custodia foundation in Paris provided an envelope Vincent van Gogh used in 1883. On the 3rd of September, 2012, samples of biological material were taken at Centre Universitaire Romand de Médecine Légale, Lausanne, from the stamp and the flap of an envelope. DNA was extracted, a small part of the mitochondrial DNA was sequenced, cloned in vitro and incorporated into living cartilage cells which had been acquired from Lieuwe van Gogh, a 4th generation descendant of Vincent van Gogh. As a male descendant in an uninterrupted male line he shares the Y chromosome with Vincent van Gogh and 1/16th of his genome. The mtDNA that was found on the original envelope does not match the van Gogh maternal linage. However, for the principal of replacement it does not matter whether the historical material stems from Vincent van Gogh or anyone else. At this time, only sequenceable historical nuclear DNA, typically derived from bone marrow or teeth, has the ability to replicate and to function within the genome of a living cell line. Consequently, the historical mtDNA from the van Gogh-envelope was used in both a symbolic and to a certain degree conceptual manner. The segments of historic mtDNA were introduced into the nucleus of the cells to grow the ear, attached to entirely synthetic segments of DNA, that produce a foreign fluorescent protein. According to the chronological development of this project in the starting format shown at ZKM | Karlsruhe, the historical mtDNA from the van Gogh-envelope was used and attached to additional DNA, consisting of a vector and a reporter gene, which was then inserted into the nucleus of the cells. It multiplies and replicates as the cell multiplies. In the course of the progression of the edition of produced ears, the described concept of replacement is carried out by using other historical sources of nuclear DNA for the replacement of chromosomes or the replacement of an entire cell nucleus by using nuclear transfer for cloning to reflect the principle, as well as from scratch generated synthetic DNA rather than purely biological samples. The ear-project is a series of a limited edition, visually of the same appearance, but made of different scientific components, that refer to the same principle of replacement. 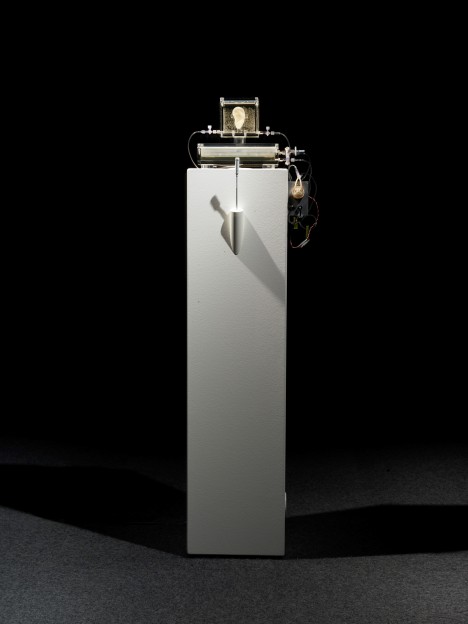 During the opening at ZKM Karlsruhe, Germany on 30th May 2014, Noam Chomsky was the first person to speak to the ear. To the left Lieuwe van Gogh.

The crossover between science and art is the main focus in my art work, displayed with different media such as living / biological material as well as photography and installations. Current projects include close cooperation with scientists in the fields of biology, human and plant genetics, tissue engineering and other areas of scientific research. On bio-art projects I work, amongst others, with living objects, cells, genetic material, and various forms of intervention. The projects are related to different areas of research and involve work with various scientific tools, methods and concepts. View all posts with Diemut Strebe →