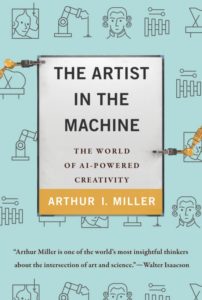 Richard Bright: Your forthcoming book is titled The Artist in the Machine: The World of AI-Powered Creativity. Can you say something about the aim of this book and the topics it will cover?

Arthur I Miller: In The Artist in the Machine I explore the brave new world of machines that are learning to create bold new works of art and music, write stories, tell jokes, or function as the brain that operates a robot. I introduce readers to the artists and scientists working at the forefront of research, creating machines that can improvise, play jazz, come up with surreal screen plays or create hitherto unimaginable works of art.

I’ve spent decades looking into and writing on creativity in both humans and machines, analysing what it is and how to enhance it. With this new book I’ve focussed my attention on AI.

Will computers ever think like us? Could they ever have flashes of inspiration or come up with mad ideas? Could they invent something no one ever thought of before and never thought was needed? Could they dream up the plays of Shakespeare – or do they need to? Perhaps they will function in totally other ways, come up with ideas just as great or solutions just as effective but different from the ones we would come up with. And what do we mean when we talk about being creative? Should we rethink what we mean by “thinking” and “creativity”? My new book looks into all these questions and many more.

In my quest for answers I’ve turned to the experts. I’ve interviewed scientists working on frontier problems in computer thinking, key players who are developing AI that creates art, literature, and music. All are doing extraordinary work, and all have insights to impart. I introduce readers to the latest developments in all these fields and to the extraordinary people making them.

RB: What are the key factors essential to the creative process?

AM: Some of the key factors are inspiration, focus, perseverance and unpredictability. All of these I explore in detail in my book. There’s also the key question of whether genius can be cultivated or whether it’s something you have to be born with.

RB: How does this relate to AI-powered creativity?

AM: Machines have the potential to develop all these characteristics, even those to do with feeling, such as suffering and worldly experience. From scanning the web, they will learn what these are, what they mean and how to apply them. This, of course, requires their possessing an excellent understanding of language, tropes included. Machines are not yet at this stage. Developing affective machines is a hot research topic, as is natural language processing.

RB: Can you give some examples of different ways AI-powered creativity has occurred in the arts?

AM: There have been glimmers of AI-powered creativity for some time.

Let’s start with games. Recall the 1997 chess match between Garry Kasparov and IBM’s machine Deep Blue, in which Deep Blue jumped its programme to make a move that stunned Kasparov. This extraordinary and unpredictable move was surely a glimpse of creativity. Eerily, a similar thing happened in 2016 during a Go match between the Go master Lee Sedol and AlphaGo, an artificial neural network machine created at DeepMind in London, in which the machine made a killer move that rattled Lee as well as the AlphaGo team. Deep Blue was programmed to play chess, but AlphaGo taught itself after studying 30 million moves in games played by Go masters. Then there’s AlphaZero. Its chess games border on the surreal. People who have played against it say that it wins with style and imagination – which also demonstrates its creativity. I tell the whole story in my book.

Google’s DeepDream is a great example of how machines see the world in ways that are drastically different from ours. The images it creates are novel, ambiguous and complex, qualities that are sometimes considered a definition of creativity itself. Using a Generative Adversarial Network (GAN) enables machines to dream as they assess their work. A hybrid form of GAN called a Creative Adversarial Network creates styles of art never seen before.

Machines can create texts that don’t work in the way that people expect language to work, blurring the line between sense and nonsense. Perhaps in future they will change the course of literature, along with art and music. Then there’s the 90 second melody that a neural network machine at Google created entirely from scratch. It was trained on 4,500 popular melodies and seeded with four musical notes and given a problem – to create a brand new melody. To solve it it worked the way that we do, using the knowledge that it already had. This was the first piece of music ever composed entirely by a machine that had not been programmed to do so.

RB: Do you have any examples of artists who are currently engaging, or ‘collaborating’, with AI-powered creativity?

AM: Mario Klingemann is a leading figure in AI-powered art. He began creating art with DeepDream, then moved on to GAN, then a hybrid version of GAN called pix2pix. Recently a stunning work of his was auctioned at Sotheby’s for $50,000. A few months earlier a far less original work created by the art collective Obvious was auctioned by Christie’s for $432,000. Perhaps the novelty of AI art wore off between auctions. Nevertheless AI-created art is clearly being taken seriously in the high-end art market.

Then there’s Ahmed Elgammal the creator of Creative Adversarial Network (CAN) algorithm, a spinoff of GAN that creates entirely new styles of art. He exhibits his work widely and also sells some.

These are a couple of examples from among the scores of artists who collaborate with AIs.

RB: A lot of the processes behind creative thinking are still unknown. Has AI-powered creativity a role to play here in helping the understanding about our own creative methodology?

AM: There are clear and precise parallels between the functioning of the brain and of machines which means that exploring machine creativity can offer insights into human creativity. I believe that there is nothing mysterious about creativity and that it will one day be unravelled.

At present we have an adequate qualitative understanding of the creative process, but much of the fine structure is still to be discovered. One way is to find out how the brain itself is wired up. This used to be the purview of neuroscience. But with AI on the scene there is now a feedback loop between the two. Neuroscience can tell us something about machines and vice versa. This whole area of research is becoming more and more exciting due to the possibility of replacing parts of our brains with silicon chips.

RB: Can a computer be truly creative, or are they merely tools to be used by artists?

AM: Absolutely! Why not? Why should creativity be attributed only to humans? Animals can be creative, so why not silicon life forms? The incredulousness and push-back to machine creativity boggles the mind. I have already given examples of machine creativity. There are more – many more – in my book.

Today we have a new breed of artist who is artist and technologist rolled into one. They and their machines bootstrap each other’s creativities to produce work that would have been unimaginable before. Machines are not simple tools in the same sense as a pencil or a can of paint. Many artists sign off work with their name and the name of the machine with whom they collaborated.

RB: When does a machine become an author of an artwork? And how can we form an understanding of the art that it makes?

AM: The machine becomes an author of an artwork when it creates an artefact of its own volition, when it says to itself, “I want to create a painting of that landscape or perhaps of what I was thinking about yesterday.”

RB: In order to be truly creative, will AI need to develop emotions and consciousness?

AM: Yes. As I mentioned above, the field of affective computing is burgeoning. This directly affects our interactions with digital assistants like Siri and Alexa. In my book I discuss in detail the need for AIs to have emotions and consciousness in order to be truly creative. An AI will need to be aware that it made an astounding move in chess, created a breakthrough painting, or composed a melody that will live forever. For more on this fascinating area of research I urge you to see my book.

RB: Do you think AI creativity will surpass human creativity in the future?

AM: Absolutely. It’s inevitable. The moment when real AI will arrive will be when machines are as intelligent as people, sometimes referred to as Artificial General Intelligence (AGI). But AIs will go on to surpass human intelligence and human creativity too, developing Artificial Superintelligence. The time frame for AGI varies among experts from a few years to a few hundred years. We just don’t know. It’s difficult to predict five years into the future. Indeed who knew twenty years ago that the world would be as it is now? What may well emerge is some unimagined machine architecture which goes way beyond what exists today.

What is certain is that we are witnessing the appearance of an intelligence with the potential of unlimited creativity. We don’t have to go to Mars to seek new intelligences, they are developing right next to us. And – extraordinary to contemplate – we are beginning to merge with them.

About Arthur I Miller

ARTHUR I. MILLER is fascinated by the nature of creative thinking and, in particular, in creativity in art on the one hand, and science on the other. What are the similarities, what are the differences? An experienced broadcaster, lecturer and biographer, he writes engagingly about complex social and intellectual dramas, weaving the personal with the scientific to produce thoroughly-researched works that read like novels. His book Colliding Worlds: How Cutting-Edge Science is Redefining Contemporary Art (W.W. Norton) tells the story of how art, science and technology are fusing in the twenty-first century. To research it he interviewed leading figures in the world of contemporary science-influenced art and has spent time and lectured at CERN, the MIT Media Lab, Le Laboratoire, the School of Visual Arts and Ars Electronica. In 2013 he was a juror for the Prix Ars Electronica for Hybrid Art. See www.arthurimiller.com/ View all posts with Arthur I Miller →