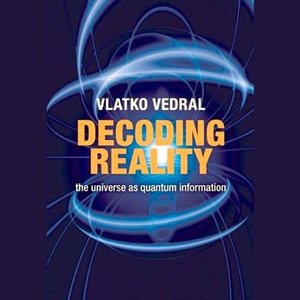 Richard Bright: In your book ‘Decoding Reality: the universe as quantum information’, you state that the concept of information is fundamental. Can it be given objective meaning?

Vlatko Vedral: I think that’s a very good point, and that’s what makes me switch from the classical world – which I describe in the first half of the book – to the quantum world. The notion of information that I talk about is really due to Claude Shannon. It’s a function of only one quantity, which is basically the probability for an event to occur. If you have something that’s very unlikely to occur, and if it still occurs the quantities measured would carry a high degree of information. Likewise, if something is very likely to occur, this carries very little information if it occurs. If you accept that this is how information should be quantified, then you need some kind of notion of probability that’s more objective, rather than subjective. If you look at the classical world governed by Newtonian laws then, according to this theory, everything that can happen is completely deterministic, providing you have the right amount of information initially. What that means is that probability becomes a completely subjective concept in classical mechanics. You need to use probability classically only because you lack certain knowledge. If you didn’t lack that knowledge, or you could in principle acquire it, you would either know that something happened – and it would have to happen with 100% probability – or, it simply cannot happen. Classically speaking the notion of information is actually superfluous in some sense because, ultimately, if you have the right kind of knowledge, something either happens or it doesn’t happen. The story changes very radically with quantum mechanics where probability is something fundamentally there, and, to use your language, it’s basically an objective property of the world, rather than something subjective because of our lack of understanding or knowledge. So, I think quantum mechanics makes this notion objective; otherwise it would have to be completely subjective.

RB: Are there different meanings of information? You mentioned ‘Shannon,’ quantum events as qubits, and, of course, semantic information is another aspect…

Vlatko Vedral is Professor of Physics at the University of Oxford and CQT (Centre for Quantum Technologies) at the National University of Singapore and a Fellow of Wolfson College. He is known for his research on the theory of Entanglement and Quantum Information Theory. He is the author of Decoding Reality: the universe as quantum information (Oxford University Press, 2010) View all posts with Vlatko Vedral →