In the Preface of my new book, The Book of Trees, I mention the importance of an historical analysis of visualization, since it’s critical for us to understand its long evolution and not be overly infatuated by the work created in the last decade alone. In this context I provide a quote by Michael Friendly, who stated: “There certainly have been many new things in the world of visualization; but unless you know its history, everything might seem novel.”

The tree figure is perhaps one of the most enduring, widespread visual metaphor for mapping information. With deep roots in medieval visual exegesis and illuminated manuscripts, its alluring arboreal structure has been adopted by numerous scholars, researchers, designers, and illustrators over centuries to map an incredible array of knowledge domains. Here is a simple timeline showing four distinct executions (with year below) comprising roughly a 800-year span:

But trees are not the only visual model being used for centuries. In 2001, Martin Wattenberg introduced a novel way of visualizing a song as a sequence of translucent arcs with varying width. The method showcased in The Shape of Song is better described by Wattenberg himself: “Each arch connects two repeated, identical passages of a composition. By using repeated passages as signposts, the diagram illustrates the deep structure of the composition.” The project website shows a striking gallery of images that give shape to various songs by artists such as Bach, Madonna, and Philip Glass.

This interesting technique became known as Arc Diagrams and was immediately followed by numerous projects, many of which I’ve been documenting over the years in VisualComplexity.com. Here are just some of the many visualizations embracing this approach:

However, this method is not entirely new. In fact, arc diagrams have been used for over a thousand years and were particularly popular in middle-age Europe in the depiction of, guess what, musical compositions. Many of these intricate diagrams accompanied medieval texts on musical theory and aimed at translating complex sequences of musical tones and intervals, such as tetrachords, in order to facilitate understanding. They were ultimately educational tools meant to be attentively studied and analysed.

Here are some remarkable examples: 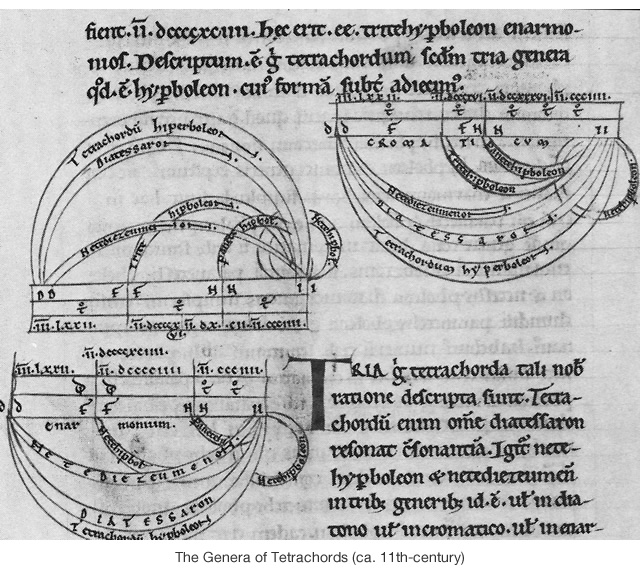 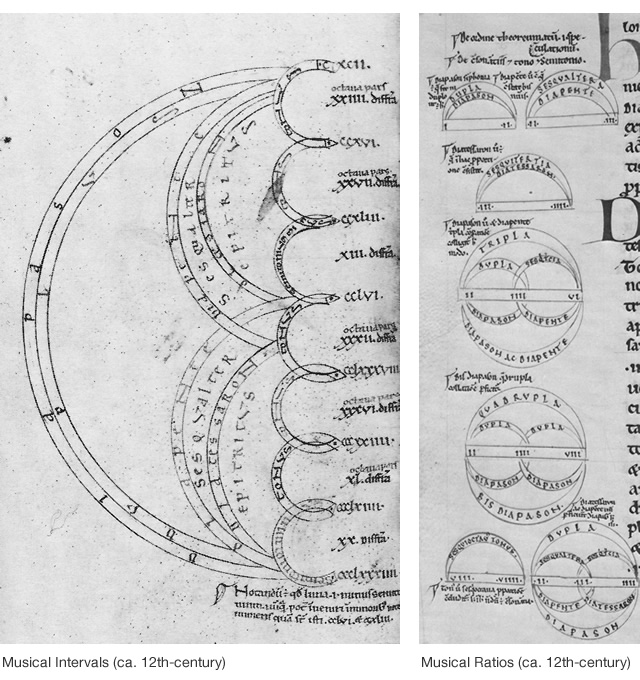 But from all the cases I found, the double-page chart below from a 13th-century manuscript is arguably one of the most complex and intricate examples of this old technique. A great specimen of medieval visual exegesis that served as a teaching tool for musical theory, this graph represents the various divisions of a monochord–an ancient single-string musical instrument. 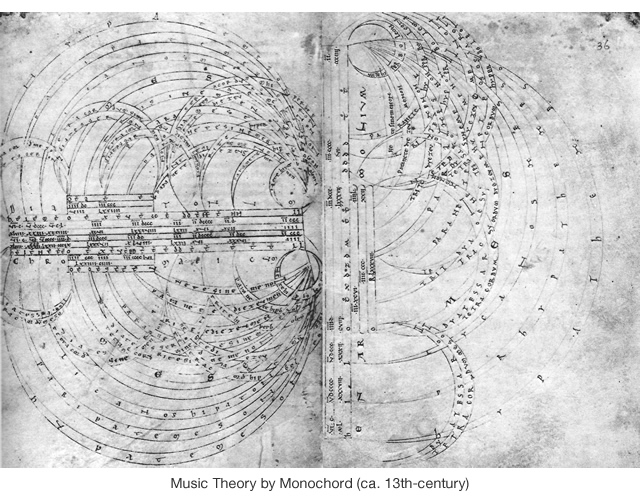 As one of the most hailed methods of modern information visualization, the treemap has truly become an epitome of the recent growth of the field and one of the most widespread methods for visualizing hierarchies. Credited with inventing the method in 1991, when trying to find an optimal solution to visualize the file structure of his hard drive, Ben Shneiderman’s contribution is invaluable, opening the door to a great diversity of novel approaches, such as the circular and voronoi treemaps. Here’s a screenshot from one of the earliest modern treemaps: 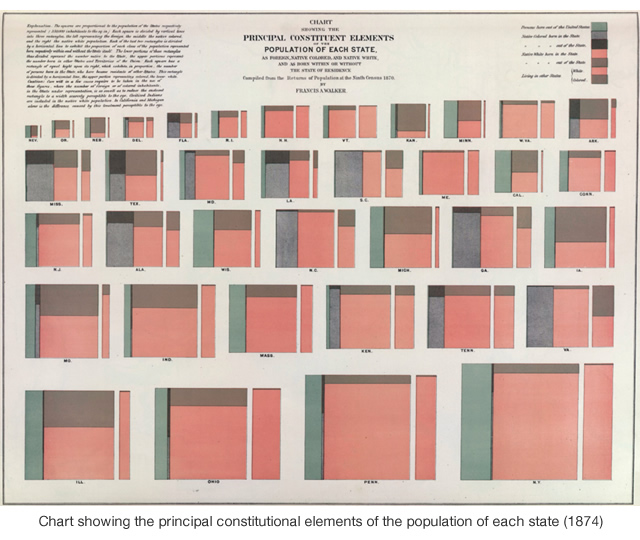 Shneiderman is certainly the father of the modern, computer-generated treemap, which introduced an important recursive tilling algorithm able to handle large, multi-level hierarchies. But the concept was not entirely groundbreaking. Area diagrams and simplified rectangular treemaps had been in use for several decades before Shneiderman’s preeminent work.

The image below shows a comparative diagram showing the size and population of each continent and country of the world, part of a world atlas compiled in 1845. This is a four-level treemap, where the world (1) is comprised of three major “continents” (2), divided into regions (3), and further subdivided into individual countries (4).

The following chart is perhaps known to some of you, since it has surfaced in a few places in print and online like Fast Company. It is not only one of the earliest examples of a rectangular treemap, but also makes a compelling use of the small multiples technique.

As with many other contemporary visualization techniques, the previous examples show us that the roots of arc diagrams and treemaps are considerably deeper than what they seem. Even though I only explored two visual methods in this post, a similar analysis could easily embrace many other present-day models. Others, such as hyperbolic trees, seem to be genuinely digital-native, given it’s dynamic exploration of hyperbolic space and reliability on human-computer interaction. Still, their unmistakable predecessors – radial trees – have been in use for several decades, and many researchers and artists, most notably E. C. Escher, have throughly investigated hyperbolic geometry in their work.

The goal of this post is not to devalue the contribution of main figures in modern information visualization, nor to provide a negative everything-has-already-been-invented attitude. Above all, it is to recognize the ancient evolution of this discipline and the achievements of the past, to understand their origins, progress, challenges, failures, and successes. As Mark Twain appears to have said: “History doesn’t repeat itself, but it does rhyme.”

This article was originally published the Visual Complexity VC blog

Manuel Lima is the author of –

The Book of Trees: Visualizing Branches of Knowledge (2014)

The Visual Complexity website can be found at www.visualcomplexity.com/vc/

Manuel Lima is a designer, author, lecturer, and researcher. His first book was Visual Complexity: Mapping patterns of information. His latest The Book of Trees: Visualizing Branches of Knowledge, published in April 2014 View all posts with Manuel Lima →