This is a re-edited version of an essay that was originally written for the book Anarchy in the Organism published by Black Dog in 2013. The book was a collection of essays and reflections on a Wellcome Trust funded residency and interdisciplinary art installation at the UCLH Macmillan Cancer Centre in London that went on to be performed as a live installation at music and arts Festivals.

“well-being and ill-being always contain a certain measure of their own opposite, hence they always-already inhere in a hybrid relational space of liminality, an interactive territory of the middle concerned with the processes of relationship and mediation rather than with linear causality, certainty and purism.”  Monia Brizzi

When Guy Noble, curator at UCLH Arts approached me to take on the subject of cancer I was excited if not a little apprehensive. I knew that this residency and commission would need to be confronted in a systematic, rigorous and personal way. I happened to be working at the time on another artwork that looked at notions of order and disorder in the cosmos and I realized that some of the same thinking could inform an approach to cancer that apprehended it both as a deeply personal, existential journey and also as a biological and social phenomenon that could be linked to other phenomena and their patterns of growth and decay, order and disorder in the natural and the social world.

Complexity theory underpins the thinking behind Anarchy in the Organism. Complexity theory is an integrative way understanding whole systems and their parts that has gained wide acceptance as a way of comprehending the messy and unpredictable nature of the world in many fields such as biology and economics. I use it as an organizing principle in my work and used it for this project as a way of revealing hidden underlying similarities in disparate phenomena to confront the possible meanings of cancer from scientific, social, cultural, ethical and existential perspectives. 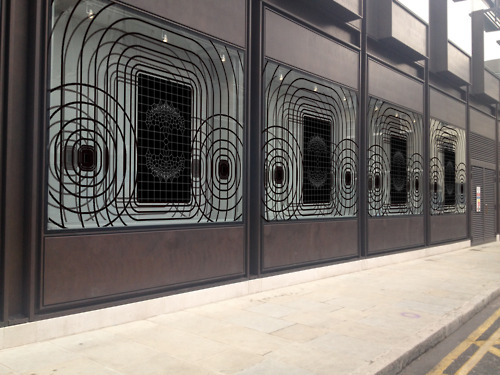 The artwork that emerged from this residency was installed in the Capper Street windows of the Macmillan Cancer Centre. Four 55 inch video screens were mounted vertically against the glass in the window boxes facing into the street and a concentric pattern of self-adhesive vinyl on the inside surface of the glass emanated from them suggesting the connection between the system of the architecture and hospital and the artwork. The computer-generated organisms on its four video screens demonstrate growth, mutation and decay as normal aspects of being alive. With this installation I was asking is cancer an aberration or is it an embedded aspect of being a complex organism? Complexity theory describes a reality that is non-deterministic, in which the future cannot be predicted with any degree of certainty, there is no linear causality, rather sets of probabilities and likelihoods fan out from any given moment; indeterminacy, chance and choice are intrinsic to being in the world;  each moment can be seen as a recursive network of causes and consequences.

From the perspective of complexity, nature, society and humans are balanced on a razors edge between order on one side – frozen stasis where there is no freedom or agency, and chaos, on the other – a state of total disorder and flux where no definable thing can arise. This boundary between the two is where as complexity theorist Stuart Kauffman says novel, complex and creative phenomena occur…..

Simeon Nelson is a sculptor, new media and interdisciplinary artist interested in convergences between science, religion and art, complexity theory and relationships between art, architecture urban sites and the natural world. View all posts with Simeon Nelson →