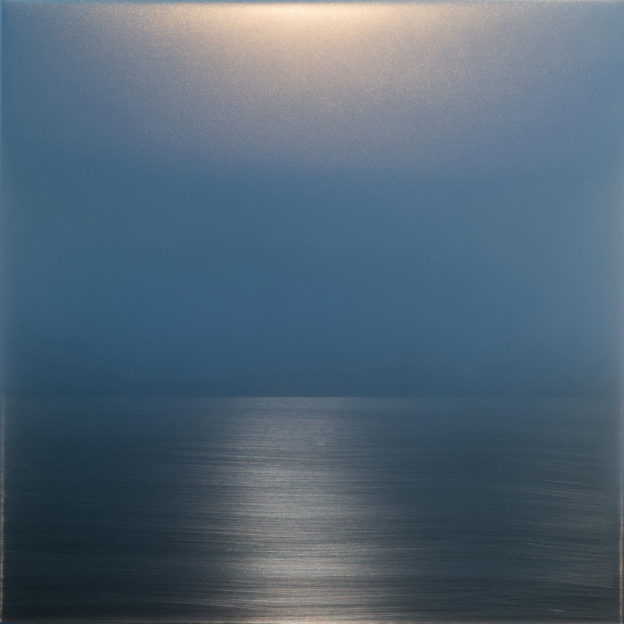 Miya Ando: I’m of mixed heritage; I’m half Japanese and half Russian/Ukranian descent. I spent part of my childhood living with my mother’s family in a small Buddhist temple in Okayama, Japan. I spent the other part of my childhood in the Santa Cruz Mountains, on 25 acres of redwood forest. Both have informed and inspired my philosophy and approach to the making of art. 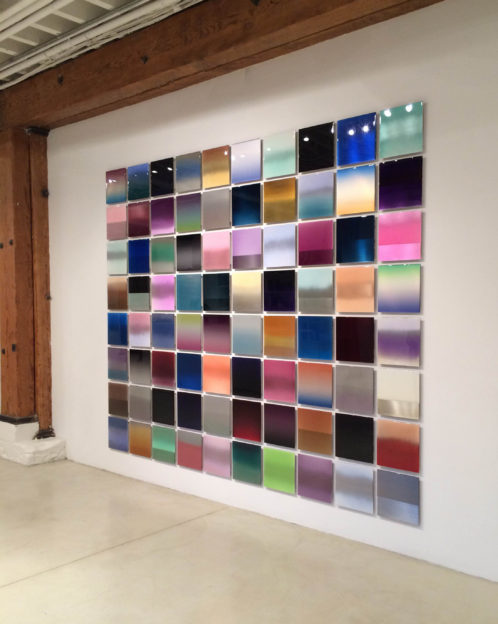 MA: I am interested in time and temporality; our relationship to time and our perception of time. The vocabulary I often employ is fleeting light, experienced by the viewer as they walk around my paintings on metal, for example. Creating scenarios wherein the viewer is made aware of the present moment and transitory moments is something I investigate. I often employ the vernacular of nature, such as shifting light. 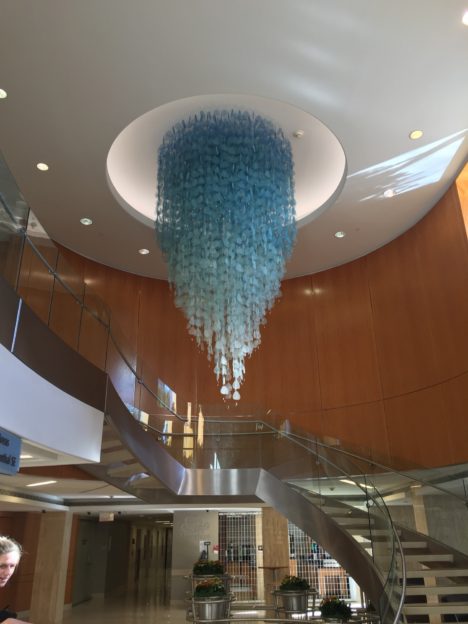 RB: Your work has a strong contemplative, transcendent quality, evoking contrasts between the steadfast and the ephemeral, the secular and spiritual. Can you say something about this?

MA: I’m drawn to the dual nature of things and often look at juxtaposition my work; things that may seem permanent and yet have an impermanent nature. I’m influenced by a Buddhist notion which states that “the fundamental nature of reality is that all constituent forms that make up the universe are temporary”. I am also interested in creating moments of tranquility and putting forth contemplative imagery which may promote, even if only for a moment a meditative state or opportunity of awareness to the viewers. 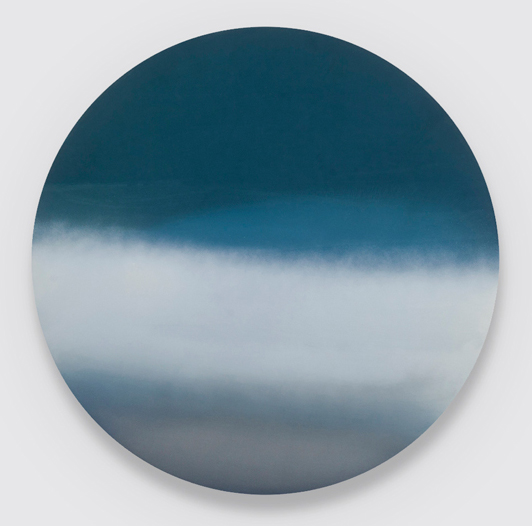 RB: Buddhism revolves around the discipline of practice, the focus on refining one’s actions, not the expounding of a theory. There is also the term ‘artistic practice’. How much weight does ‘practice’ feature in your work?

MA: I approach the making of art with a rigor and a discipline, which is the way I was raised. I’m in the studio daily, I’ve always had a 7 day a week practice since I began making artwork. I think it is a practice to connect the heart (kokoro), the intellect (mind) and the hands in the making of art – I think of it as a literal practice, something that requires work and effort and daily attention in order to improve and distill. 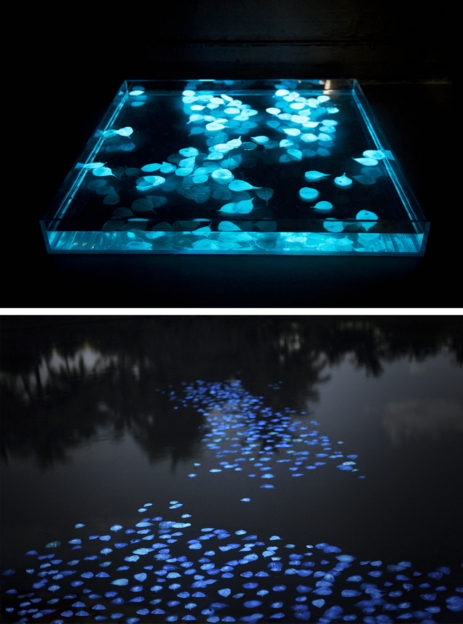 Miya Ando: Obon (Puerto Rico), Bodhi Skeleton Leaves, Phosphorescence, Resin, 1200″ x 1200″ (Variable), 2012 (This was an outdoor public project commissioned by The Fist Art Foundation, and a site-specific project that celebrated Puerto Rico’s natural phenomenon of Bioluminescence and history of refugee boat travel to the island. I wanted to pay homage to this and connect it with the traditional Japanese Obon ceremony, an annual ritual of remembrance in which descendants of visiting spirits guide their deceased ancestors back to the netherworld by floating small paper boats containing lit candles).

RB: The foundation of your practice is the transformation of surfaces. How important is the use of light in this?

MA: I consider light to be the main attribute of the works; it’s the vocabulary of shifting, fleeting and transitory light which visually communicates and reiterates the concept of time in the works. 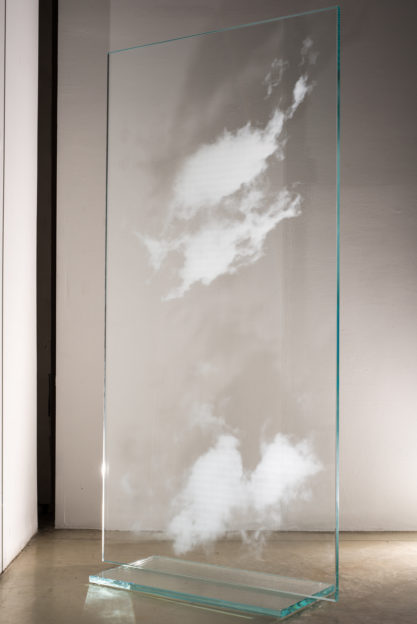 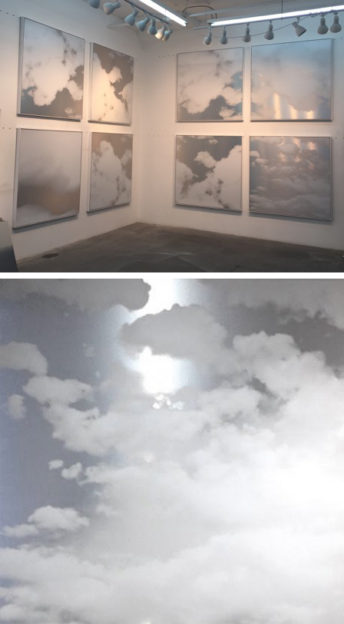 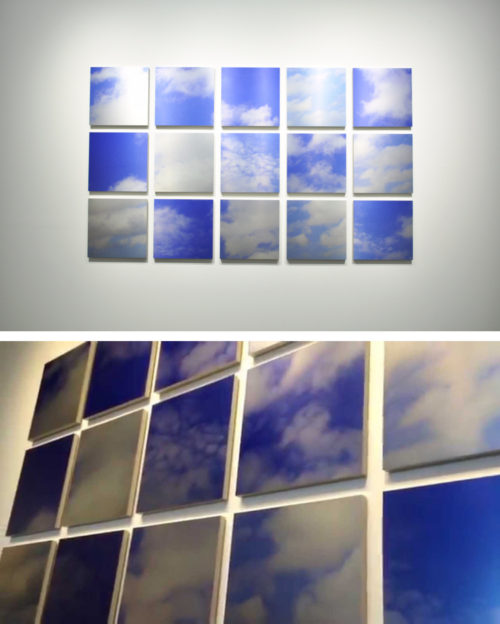 Miya Ando: Clouds 1-15, Dye Printed Aluminum, 24” x 24”, 2014 (By using permanent dye on aluminum, and looking at the same clouds throughout the course of a day, I wanted to create a grid that is ephemeral and transitory, capturing the transitoriness in a permanent substrate. My aim was to make make something very industrial and marry it with images from nature.)

RB: Many of your paintings evoke the feeling of landscape stripped to just its horizon. How important is landscape, or the ‘sense of place’, to your work?

MA: I’m interested in a universal language which has the same meaning to all people. Any time a rectilinear form is bisected, it’s automatically a horizon to any human viewer; this has been my experience thus far. 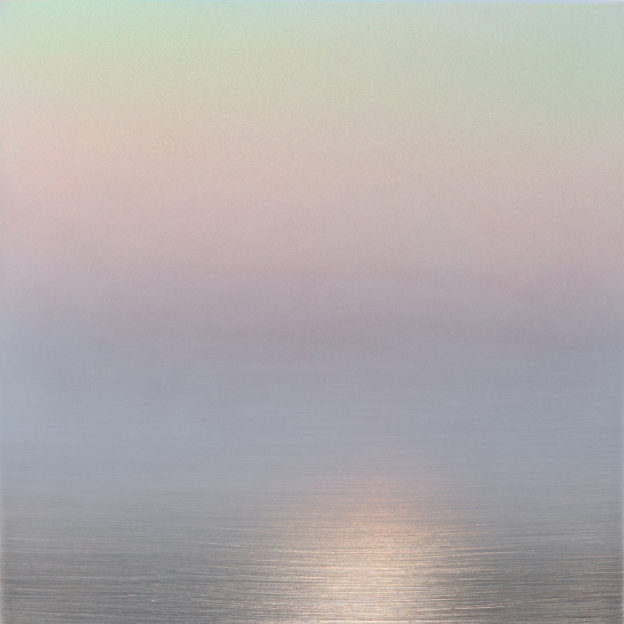 Miya Ando: Phenomena, 36″ x 36″, urethane, pigment, aluminum (“An ongoing series of paintings on reflective aluminum panel. Phenomena was inspired by cloud iridescence and is created with a light-shifting, iridescent pigment which changes as one walks around the painting”).

RB: The Zen master, D.T. Suzuki, wrote “Emptiness which is conceptually liable to be mistaken for sheer nothingness is in fact the reservoir of infinite possibilities”. You have described your work as “studies in nothingness”. How does your spiritual practice inform your exploration of reduction and minimalism?

MA: I’m Buddhist, my grandfather was a Buddhist (Nichiren) priest. I’m interested in Zen and find Zen teachings and ideas to be highly influential in my work. My mother is a teacher of Urasenke and she and I are both interested in Zen poetry and words.  Emptiness and nothingness are completely different in Buddhism. I could discuss this subject matter in a lengthy essay, but for the purpose of answering the question, I’ll say that the idea of Emptiness is something I look at very carefully in my artwork. I have been putting forth for several years a series of works called Kuu (which in Japanese means both Empty and Sky) as an investigation into this idea. 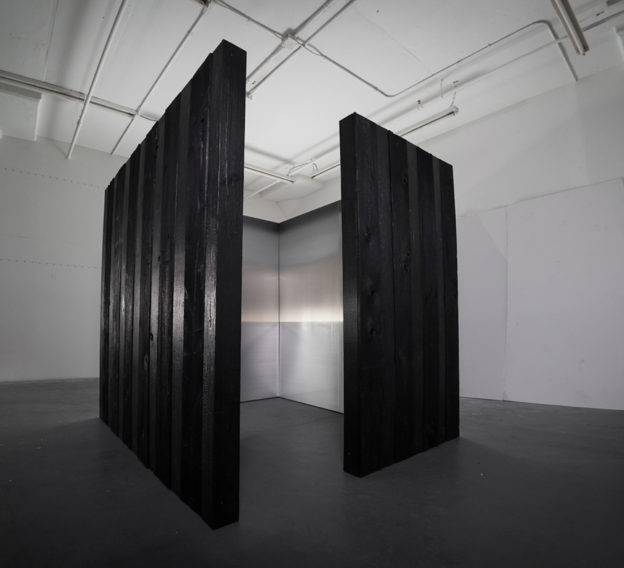 Miya Ando: Emptiness The Sky (Shou Sugi Ban), 96″ x 96″ x 96″, charred wood, metal paintings (urethane, pigment, aluminum). (This installation was created for “Frontiers Reimaged” for the 56th Venice Biennale. I utilized a traditional Japanese exterior architectural cladding of charred wood. Inside are paintings on metal. The piece was inspired by the Japanese Buddhist word ‘Kuu’, which means both ‘Empty’ as well as ‘Sky’)

RB: Your work encourages us to observe ourselves in the shifting process of observing and, by doing so, transforms our relationship to perception. Is this how you wish your art to be perceived?

MA: Difficult to state how I would like my works to be perceived since every person is unique and I don’t know what each viewer’s perception will be. Each I believe is as relevant as any. Perception is about consciousness and awareness and differs for each viewer. I hope that the works are a dialogue in which I create a work, it is viewed and perceived by a viewer and creates a scenario for a shift in perception or a small transformation. 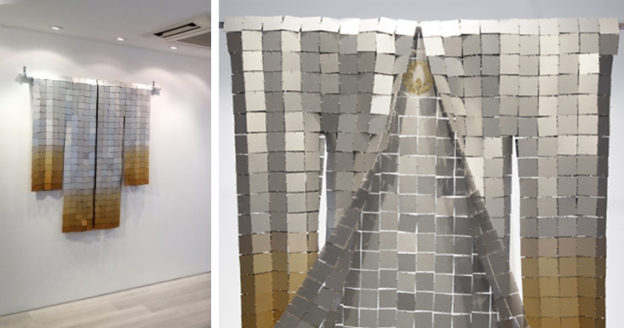 Miya Ando: Gold Kimono, Dye, Water, Anodized Aluminum, Steel, Gold Leaf, 72″ x 48″, 2013. (Long sleeve kimonos traditionally are only worn in Japan by unmarried women (married women wear short sleeve kimonos), and this work was based on a kimono my grandmother made for me – an exact replica of the size. With hundreds of plates connected by metal, I wanted to create something very feminine, yet armor-like, to explore identity.)

RB: Do you seek harmony in your work, both for yourself and the viewer?

MA: Yes definitely. I find the process of making artwork to be meditative and comforting, even if I am working with fire or acids or welding or sanding metals. I seek solace in the rigor, its my own form of Mushin or No Mind training.  Particulary this year I feel such a sense of disparateness in the world, especially in politics. I find it is more and more important to put forth works which are mediations on peace, peacefulness and quietude and so I am currently focusing on these realms. 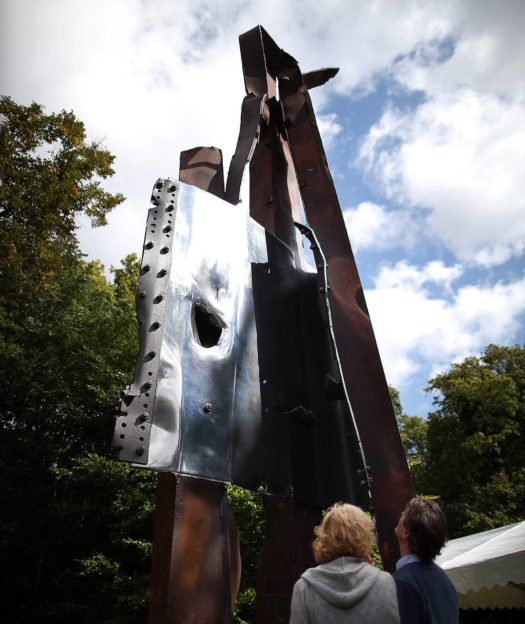 Miya Ando: 9/11 Memorial Sculpture, Steel Salvaged from The World Trade Center, 336” x 60” x 72″, 2011 (Permanently on view in front of Zaha Hadid’s Aquatic Centre at Queen Elizabeth Olympic Stadium, London, the goal was to take a found object from the World Trade Center and honor those who were victimized on September 11, 2001. I polished part of the steel to make it a mirror so it would de-materialize and re-direct sunlight into the world.) 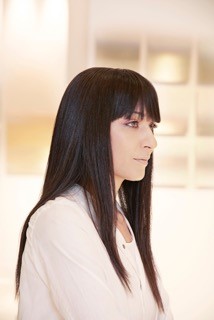 All images copyright and courtesy of Miya Ando

Miya Ando is an American artist whose metal canvases and sculpture articulate themes of perception and ones relationship to time. The foundation of her practice is the transformation of surfaces. Half Japanese and half Russian-American, Ando is a descendant of Bizen sword makers and spent part of her childhood in a Buddhist temple in Japan as well as on 25 acres of redwood forest in rural coastal Northern California. She has continued her 16th generation Japanese sword smithing and Buddhist lineage by combining metals, reflectivity and light in her luminous paintings and sculpture. In 2011 she completed two memorial sculptures for 9/11 in which she utilized 30 foot tall pieces of steel which had fallen from the World Trade Center Buildings. Ando’s work has been exhibited extensively throughout the world, including a recent show curated by Guggenheim curator Nat Trotman, the Queens Museum, the De Saisset Museum and the Worcester Museum. Miya’s public commissions include projects in South Korea, Berlin, London, Puerto Rico, New York and California. Her work appears in many important public and private collections and she is the recipient of the Pollock Krasner Foundation Grant in 2012, the Thanatopolis Special Artist Award and Public Outdoor Commission Winner and Puffin Foundation Grant winner. A recent critics' picks of ARTFORUM, Ando received her Bachelor of Science Magna Cum Laude in East Asian Studies at UC Berkeley and continued her studies at Yale University, in addition to serving as an apprentice to a master metal smith in Japan. Miya’s large scale artwork “Emptiness The Sky” (Shou Sugi Ban) is featured in “Frontiers Reimagined” exhibition in the 56th Venice Biennale. Most recently she was commissioned by The Philip Johnson Glass House to create a sculpture, “Shizen” (Nature) “Kumo” (Cloud) and her work has been acquired for the permanent contemporary collection by The Los Angeles County Art Museum (LACMA). View all posts with Miya Ando →