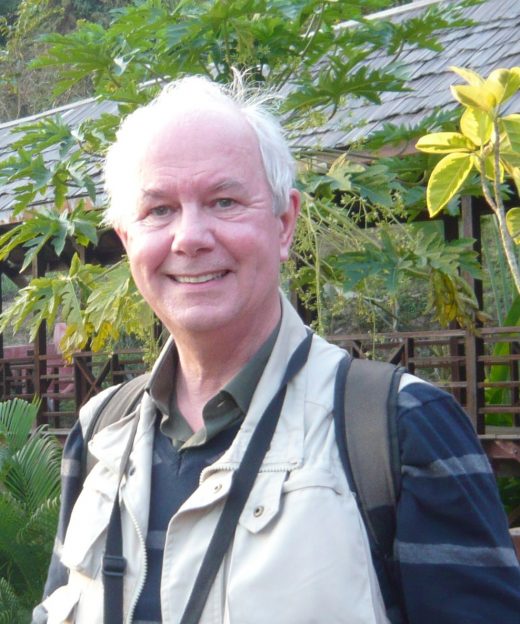 Ian Stewart: I was born in Folkestone in 1945, went to the Harvey Grammar School, then To Churchill College at Cambridge University, where I got a BSc in Mathematics. I did my PhD at Warwick, got a temporary lectureship there for one year. They made it permanent, and I’ve been based there ever since. I’ve worked in Germany, New Zealand, and the USA (Connecticut and Texas).

RB: The March issue of the Interalia Magazine is on the theme ‘Deconstructing Patterns’. How do mathematicians think about patterns?

IS: In a very broad sense, maths is all about patterns, but often what we mean by that is logical patterns—regularities or structural features. For instance, every positive whole number is the sum of four perfect squares (0 allowed). Three won’t work for all numbers, and five are never needed. That’s a surprising feature of numbers, not obvious, and hard to prove—but the proof is very beautiful. Geometric patterns come much closer to what we mean by ‘pattern’ in everyday language. One of the deepest ideas in maths is symmetry, a regular pattern in which the same components repeat over and over again—like wallpaper, or the atoms in a crystal. Fractals are another type of pattern, where the same structure appears on many scales of magnification.

RB: Your recent book, The Beauty of Numbers in Nature: Mathematical Patterns and Principles from the Natural World, is full of patterns underlaid by mathematical principles. Can you give some examples of this?

IS: The six-sided shapes of snowflakes are a good example. The sixfold repetition arises because the atomic lattice of an ice crystal has a type of sixfold symmetry. The diversity of snowflake shapes comes from the chaotic nature of storm clouds, where the crystal forms, but the symmetry dominates over short time periods. It’s very similar to the way a kaleidoscope makes symmetric patterns whatever you use it to look at. The spiral shapes of snail shells, the nautilus, and galaxies is another common natural pattern. Animal markings—spots, stripes—are another. When animals and humans move, their legs make patterns in space and time.

RB: Very often the same types of pattern that form spirals, stripes, branches, and fractals, recur in places that seem to have nothing in common, for example, the markings of a zebra mimic the ripples in windblown sand. Is there a mathematical and/or physical unity underlying natural pattern formation?

IS: There is (often), and it’s called symmetry-breaking. The idea is that many different physical processes are very symmetric—the laws of physics are the same everywhere and at all times. But the universe isn’t the same everywhere and at all times: it has structure, and it changes. So somehow the symmetry of the laws must get ‘broken’. A common mechanism occurs when the symmetric state of the system is unstable, so the slightest disturbance destroys it. Typically, the system remains symmetric, but with fewer symmetries—and we see these as patterns.

A flat sandy desert, with a constant wind, is very symmetric— the same everywhere and at all times. But that kind of uniformity is unstable: if a few grains of sand pile up, they create eddies in the wind, which disturbs more sand, and so on. The end result can be gigantic sand dunes. Many of these are arranged in beautiful patterns: parallel ridges like waves in the ocean. I particularly like barchan dunes, which are crescent shapes, and move (slowly).

Parallel dunes have less symmetry than a flat desert (although they’re more interesting). If you sldie a flat desert sideways by any amount, it still looks exactly the same, so all those sldies are symmetries. With parallel dunes, you have to slide the pattern sideways through specific distances, to make the new positions of the dunes coincide with the old ones. So that’s less symmetry.

When different physical systems have the same mathematical symmetries, they break those symmetries in the same way, so we see very similar patterns in different interpretations. The stripes on a tiger or a zebra are related to the parallel dunes in this manner. So there’s a hidden unity: the processes take different physical forms, but the patterns are universal.

RB: In terms of molecular, biological and physical development, what are the properties that permit pattern formation and how are pattern boundaries established? What role does symmetry/asymmetry play in this?

Ian Stewart is an Emeritus Mathematics Professor at the University of Warwick and a Fellow of the Royal Society. He is author or coauthor of over 190 published research papers on pattern formation, chaos, network dynamics, and biomathematics. He has published over 120 books including Does God Play Dice?, Nature’s Numbers, Why Beauty is Truth, Professor Stewart’s Cabinet of Mathematical Curiosities, 17 Equations that Changed the World, Infinity, Calculating the Cosmos, and the four books of the bestselling Science of Discworld series with Terry Pratchett and Jack Cohen. He has also published five science fiction novels: Jack of All Trades; Wheelers and Heaven with Jack Cohen; The Living Labyrinth and Rock Star with Tim Poston. He has five honorary degrees, and his awards include the Royal Society’s Faraday Medal, the IMA Gold Medal, the AAAS Public Understanding of Science Award, the LMS/IMA Zeeman Medal, the Lewis Thomas Prize, and the Euler Book Prize. He is an honorary wizard of Unseen University on Discworld. View all posts with Ian Stewart →