Ice caps are melting and species are being wiped out. There is abundant evidence and data on this yet appropriate political decisions are not taken. Stephen Bennett’s work explores whether art can bridge the gap between science and public decision-making. Data visualisation and maps are points of departure. Tufte (2006) describes the importance of escaping ‘flatland’, given that “all the interesting worlds (physical, biological, imaginary, human)… are… multivariate in nature”. Regan et al (2015) describe how processing, analysing and presenting data is “increasingly removed from the everyday experience”. Stephen’s work takes information from electronic and relatively inaccessible data repositories and presents it in analogue, tangible and interactive formats. Bourriard (2002) argues that artworks can build micro-communities, and relational aesthetics can be employed to embroil the viewer in an issue. The artist’s hypothesis is that participatory and interactive art can increase agency and engagement in evidence. This article sets out how Stephen has attempted this in his practice.

Stained Glass Climate Data Projection, Middle East is an interactive work which has a focal point of a large square of handmade stained glass portraying climate change data sourced from the website http://www.climatewizard.org. The data shows change in precipitation by 2080 in a region of the Middle East including Jordan, Saudi Arabia, Palestine, Israel and Syria.Darker red squares represent a more significant reduction in rainfall, whilst yellow represents little or no change. Light is projected through the stained glass onto the floor. A chalk-drawn map exactly corresponds to the locations which are signified by the climate data. The deep red light filtering onto the Palestine-Jordan border indicates this will see the most drying in the entire region. Viewers activate the map by blocking out the competing light from a nearby source. The audience walk over the map, explore the interaction between the chalk drawing and the projected light, and take selfies through the glass. At different paces, and through different routes, viewers discover how climate change projections map onto an already vulnerable and tumultuous political geography. 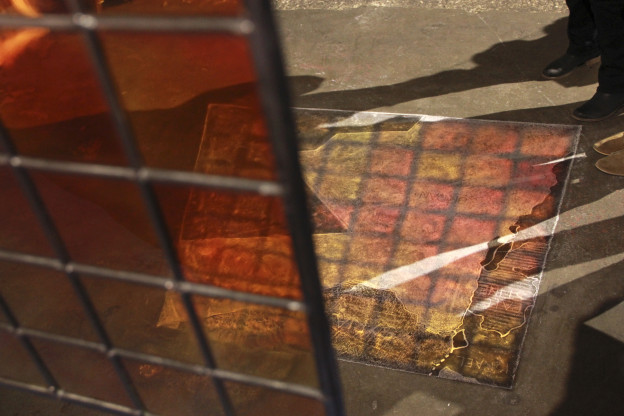 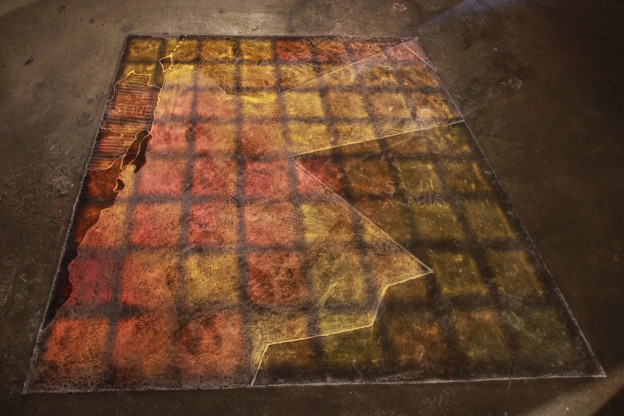 Transparent Data Maps, Bristol Channel comprise glass maps which allow a visual comparison between different spatial data relating to the Bristol Channel region. Data is sourced from various repositories such as the UK Office for National Statistics and UCL’s Datashine website, and then painted onto glass panes with transparent glass paint. Each pane of glass contains the information relating to one variable – for example population change between 2001-2011, change in precipitation caused by climate change, proportion voting ‘Leave’ in the EU Referendum, average age and incidence of deprivation. Viewers are encouraged to overlay the data panes on top of each other, to explore the evidence and interaction between variables in a visual and tactile way. 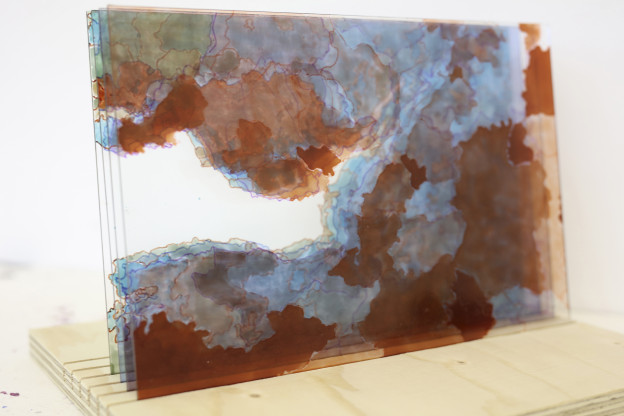 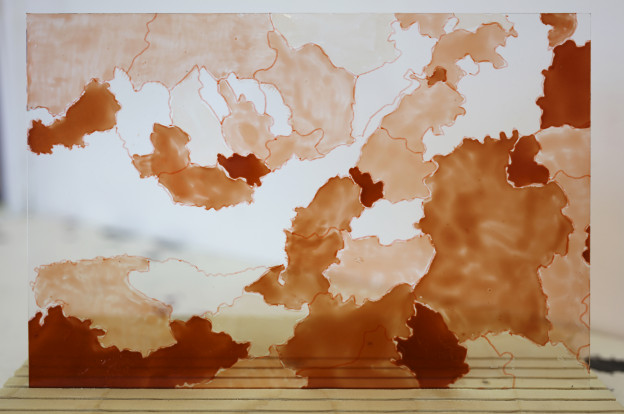 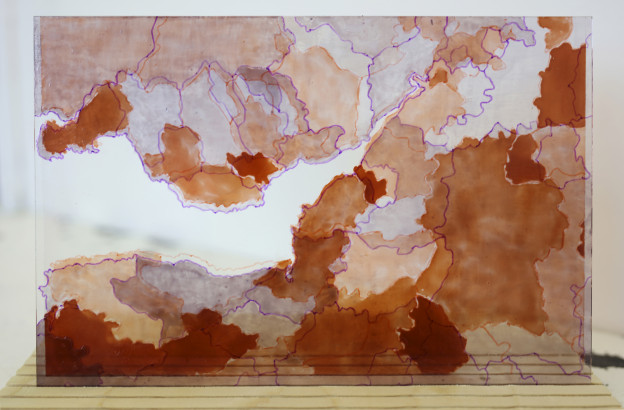 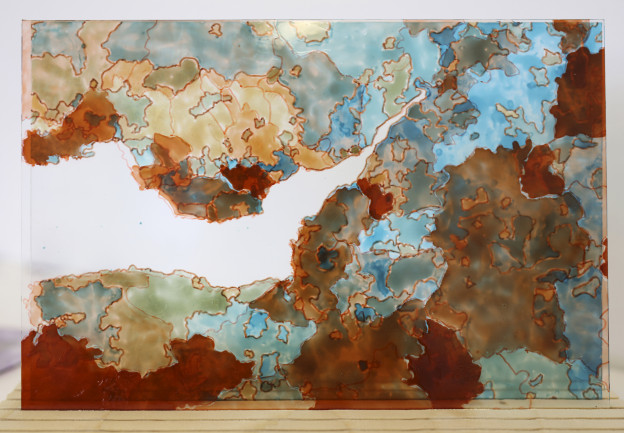 Participatory data visualisation of climate impacts in Indus Valley shows precipitation change in the Indo-Pakistan border region. This map was painted and built by gallery visitors at the Tate Modern’s Tate Exchange in a single afternoon. Visitors sit down at tables and chairs with an assortment of paints, brushes and paper. A leaflet explains the exercise: paint a 15cm2 paper in a certain colour. The colour exactly matches a map of the Indus Valley (India/Pakistan border), again sourced from www.climatewizard.org. Each 15cm2 paper is a pixel of data showing change in precipitation in 2080. Audience members are encouraged to discuss what this might mean for the region, as well as take sheer pleasure in the process of painting. The work was part of a collective exhibition with Central Saint Martins. 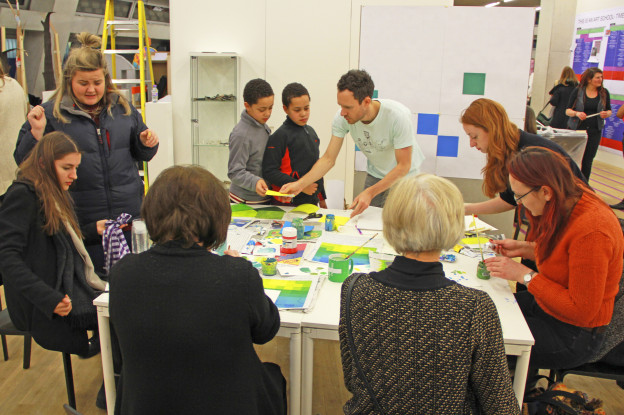 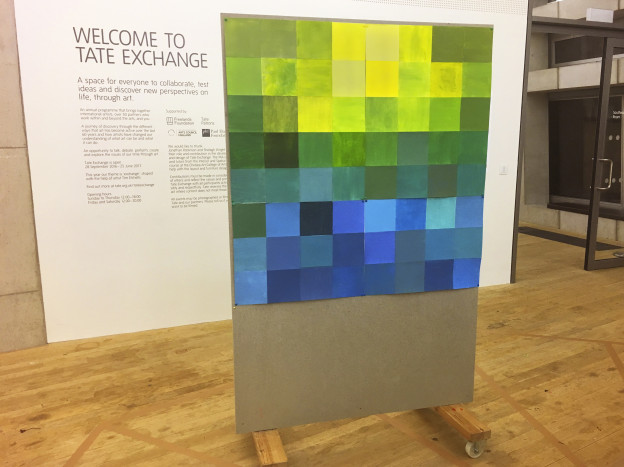 This series of four painted maps explores whether providing data in a hand-painted and aesthetic manner increases engagement with the information. Each painting comprises statistics and data drawn from a range of online and academic sources. The paintings show socio-economic and environmental data, for example the 11 official languages of South Africa and the interaction between rainfall anomaly and retail maize grain prices. In some cases, the choice of medium better facilitates portrayal of the data; for example the thin transparent paint washes allow us to see how different linguistic groupings interact and overlay in South Africa. The work benefitted from advice and inspiration from Professor Richard Black at London’s School of Oriental and African Studies.

The 11 official languages of South Africa (above left) and the interaction between rainfall anomaly and retail maize grain prices in southern Africa (above right). Data originally sourced from Wikipedia and FEWS NET.