Recently, it was illustrated that the classical optical experiment of white light passing through a prism (where a prism is a metaphor or a representation for “ego” consciousness) to produce a spectrum of different colored lights (violet, blue, green, yellow, orange, and red) can be seen as a physical representation of spiritual reality (Cohen & Cohen, 2017). In the article by Cohen & Cohen (2017), the Divine One light passes through the “ego” or “separate self” to produce the many. From this representation the spectrum of different colored lights produced can be seen as the expression of human emotions by “egoic” consciousness. This article will further illustrate that an electrical circuit in physical reality (and its corresponding physical laws, for example; Ohm’s law) can be seen as a symbolic representation of spiritual reality. The resistance (defined as R) in an electrical circuit could also be a metaphor for “ego” consciousness in the physical realm. 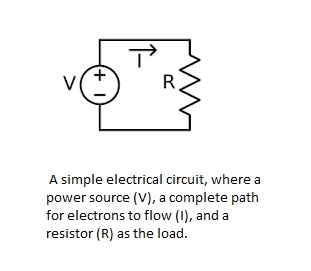 An electrical circuit’s “load” (or resistance) is found along the path of the flow of electrons between the electrons entry point into the circuit and the point at which the electrons return to the “source” (Figure 1) (Halliday and Resnick, 1978). Electrical circuits use two forms of electrical power {alternating current (AC) and direct current (DC)}. AC (the type of power used in residential and commercial structures) often powers large appliances and motors and is generated by a power station.  DC powers battery operated vehicles and other machines and electronics. Converters can change AC to DC and vice versa.

In 1827, a German physicist Georg Ohm (born: March 16, 1789 and death: July 6, 1854) described experiments where measurements {published in Ohm’s famous book Die galvanische Kette, Mathematisch Bearbeitet (Ohm, 1827)} of applied voltage and current through simple electrical circuits contained various lengths of wire. Ohm stated that the current (I) {measured in units of amperes} through a conductor {as defined as resistance (R), measured in units of Ohms, with the symbol: Ω} between two points is directly proportional to the voltage (V) {measured in units of volts} across two points (Figure 1 and Ohm’s law equation below).

Voltage (V) {also described as electric potential difference, electric pressure or electric tension for an electrical circuit} is the difference in electric potential energy between two points per unit electric charge. An electric current (I) is the flow of electric charge. In electric circuits this charge is often carried by moving electrons in a wire. This relationship between V, I and R is known as Ohm’s law {where resistance (R) is constant and independent of the current (I)}(Halliday and Resnick, 1978). Ohm’s law (V = I X R) was probably the most important of the early quantitative descriptions of the physics of electricity.

Non-duality has the literal meaning of “not two” and can also be described as “one undivided without a second”, unity with or “non-separation” (Katz, 2007). The concept of non-duality is found in various religions and spiritual traditions throughout the world (Harvey, 2013, Katz, 2007 and Loy, 1988). The “ego” is part of the conscious mind and is also part of the identity that one considers themselves to be (Katz, 2007 and Loy, 1988). The “ego” is also described as an inflated feeling of superiority over others and/or a feeling of inferiority in relation to others. The “ego” is also responsible for pleasures and desires as well as aversions. The dissolution of the ego reveals the presence of non-dual consciouness.  When “ego” death occurs there is a complete loss of subjective self-identity (katz 2007, Loy 1988). In other words, the death of the “ego” allows for the awareness of unity consciousness in which One is undivided without a second.

There is clearly more to our understanding of the physical universe than what merely “meets the eye”.  Science and its study of the nature of physical reality (or physical realm) can be seen as a window into the nature of spiritual reality. An electrical circuit (Figure 1) in the physical realm, for example (and its corresponding physical laws, for example; Ohm’s law), could be seen as a symbolic representation of spiritual reality. In the readings of Edgar Cayce, the most documented psychic of the 20th century, it is explained that the Spirit flows into the mental and then makes its presence in the visible, in the physical (Van Auken, 2017). This is clearly analogous to Ohm’s law and electric circuits in general and the non-dual understanding, where electrons represent Divine consciousness. These electrons in the physical realm flow into and through an electric circuit (the path of consciousness) and meet resistance (R) (mental or “egoic” consciousness). As a physical expression, an electrical circuit results in measureable {for example; power (in units of volts (V)), current flow of electrons (in units of amperes (I)), and resistance (in units of Ohms (R))} physical characteristics. In other words, voltage, current flow of electrons and resistance are measureable and utlimately experimentally reproducibile (and can be duplicated without error) by experimental observations in the physical realm.

It could be said by analogy that the “return” in the electrical current described here could also be representative of the “return” Home to the Divine One or to the Divine “Source” as described in the spiritual traditions. Cohen & Cohen, in the article entitled, “The Creation Story: A Journey From Paradise to Duality and a Possible Return Home” describes the “fall” of Adam and Eve in the Garden of Eden from their non-dual consciousness of unity with G-d to their subsequent existence in duality consciousness and separation from G-d. This separation occurred due to the development of the “ego” (resistance) from the eating of the Tree of the Knowledge of good and evil (duality). The possibility of an eventual “return” to the Garden of Eden is left open and the question of whether humanity will transcend “egoic” consciousness and “return” Home to the Garden of Eden and reunite with Divine “Source” is yet to be answered.

Dr Brett I. Cohen holds a PhD in inorganic and bioinorganic chemistry from the State University of New York at Albany. He received his PhD in November 1987 for his thesis entitled “Chemical Model Systems for Dioxygen-Activating Copper Proteins” and was a postdoctoral fellow at Rutgers University in 1988–1989. His research at Rutgers was in the area of peptide synthesis utilising transition metal chemistry. After his postdoctoral fellowship, from 1989 to 2003 Dr Cohen was one of the owners of Essential Dental Systems where he was CEO and Vice President of Dental Research.

Dr Cohen has been awarded 16 US patents and has had over 100 papers published in peer-reviewed journals such as Journal of the American Chemical Society, Inorganic Chemistry, Journal of Dental Research, Journal of Prosthetic Dentistry, Journal of Endodontics, Autism, etc. These papers cover a variety of areas such as inorganic and bioinorganic chemistry, biomedicine, autism, physical chemistry, dentistry and more.

Dr Cohen’s article “The Great Pyramid of Giza and the Queen’s Chamber Shafts: A Chemical Perspective” was published in NEXUS, vol. 22, no. 5 (August–September 2015).

Dr Cohen’s article “Rising Autism Rates and the Link with Epigenetics” was published in NEXUS, vol. 22, no. 6 (October–November 2015).

Dr Cohen can be reached via email at ebicbis@aol.com.