A GOLDSMITH COLLECTION BASED ON EASTER ISLAND ARCHAELOGICAL CULTURE 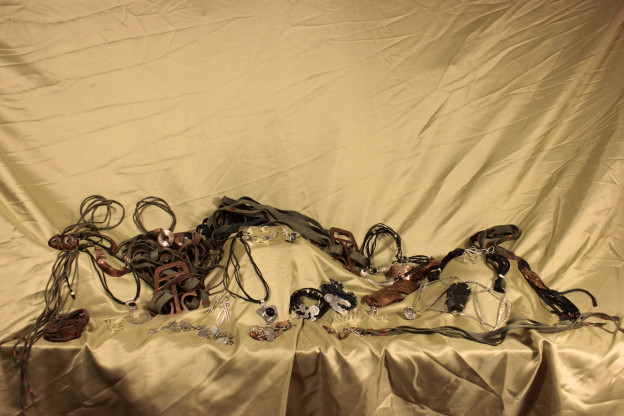 In the month of September 2014 the Chilean artist Tere Chad, sent by a friend of her Grandfather, travelled to Easter Island. She stayed at Aukara Gallery, Bene Tuki’s workshop. Bene Tuki is one of the most internationally renowned native artists of the island, as in 2012 he made a Moai as a gift to Minamisanriku town in Japan to replace the moai they had lost in the Tsunami of 2011. Through his generosity he attempted to return hope on the children of the area.

Randomly one morning, Ana María Arrendondo, Bene’s wife, stopped her gaze at Tere Chad’s hands. Curious about the rings she was wearing, Ana María begun to inquire about the jewellery by questioning her. Tere Chad answered naturally, not understanding her surprise that they were her own creations. Then Ana María proposed an elaborate project to exhibit at their Gallery. Easter Island is a rare place; not only for being the most isolated culture of the world, but also because of its unusual events that offer no explanation in the precise moment of them happening. 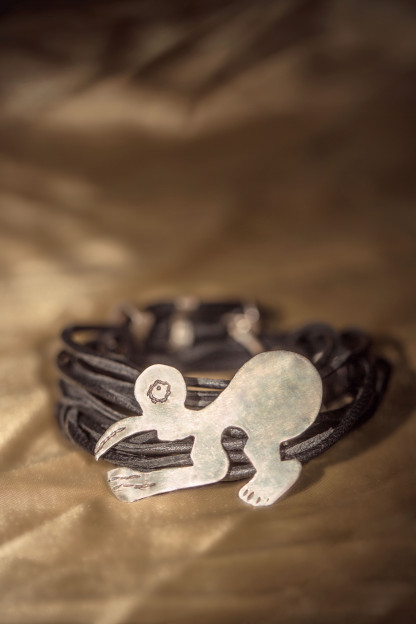 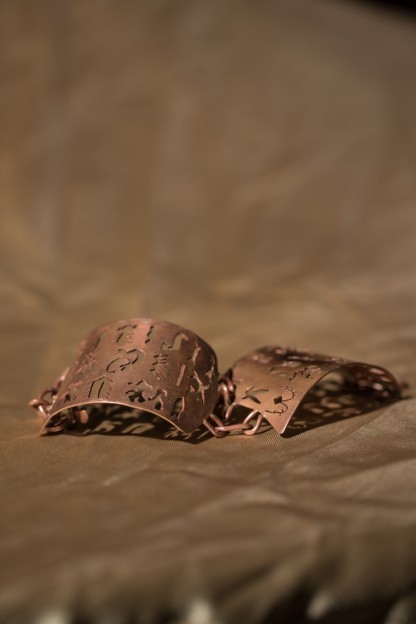 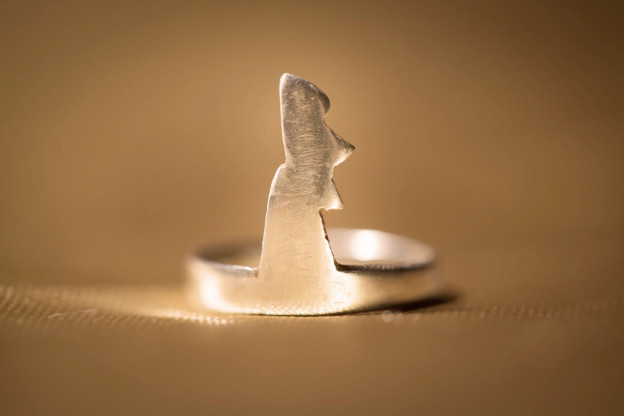 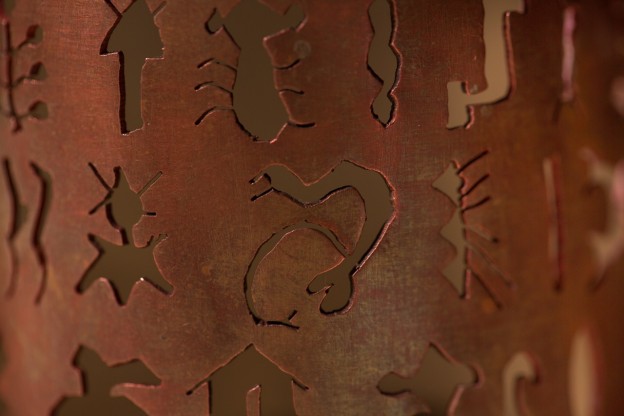 Tere Chad returned home to Santiago, puzzled by what she had experienced. On one hand she could finally begin her artistic career and leave marketing research behind, but on the other hand she felt uncomfortable having to work with a culture that is not hers. Even though Easter Island belongs to Chile in political terms, you cannot compare South America with Polynesia as to their large differentiation in culture. She did not want to be disrespectful to the islanders. While researching, she decided to re-read ‘The Separate Rose’from the poems of Pablo Neruda inspired by Easter Island:

“(…) and although I belong to the flocks,

to those who enter and exit in herds,

to egalitarian tourism, to the offspring,

I confess my stubborn adherence to the land

Lured by the dawn of Ocenia.”

Afterwards she realized that Neruda had shared her same worries. So then she decided that the name that would best suit her collection would be ‘Fusion’ or ‘Haka Piri’. In the native language, ‘Haka Piri’ roughly translates as ‘let’s try to gather’. This was the best translation of the word fusion sought by the islanders. Henceforth, the artist felt free to create and research in a manner to express her admiration to this ancestral Polynesian culture declared World Heritage by UNESCO in 1995. The collection is composed by 30 unique 100% handmade pieces that not only merge cultures (a Chilean artist perspective mixed with ancestral Easter Island icons) but also hybridises different materials, considering that the Island does not naturally have metals. The art pieces are created with silver 950, copper, obsidian and leather of the island’s landscape colours (green from the prairies, blue like the sea, brown of the terracotta ground, black from the tattoos and obsidian, and grey representing the volcanic rocks that cover the shores.)

This project also arises as a reaction against mass production and offering to reintroduce crafts, and not losing the ability of working with the hands. Intending not only to invite islanders to regain their culture, but also to export Easter Island heritage, inviting the rest of the world to appreciate its unique culture. While the artist was showing her project in Aukara Gallery, Hanga Roa, Easter Island in April 2016, she was very impressed after a cultural visit from the local school, in which several children told her there were some icons that they did not recognise. It should be a social concern that how, because of globalization, we are loosing ethnic cultures and diversity. 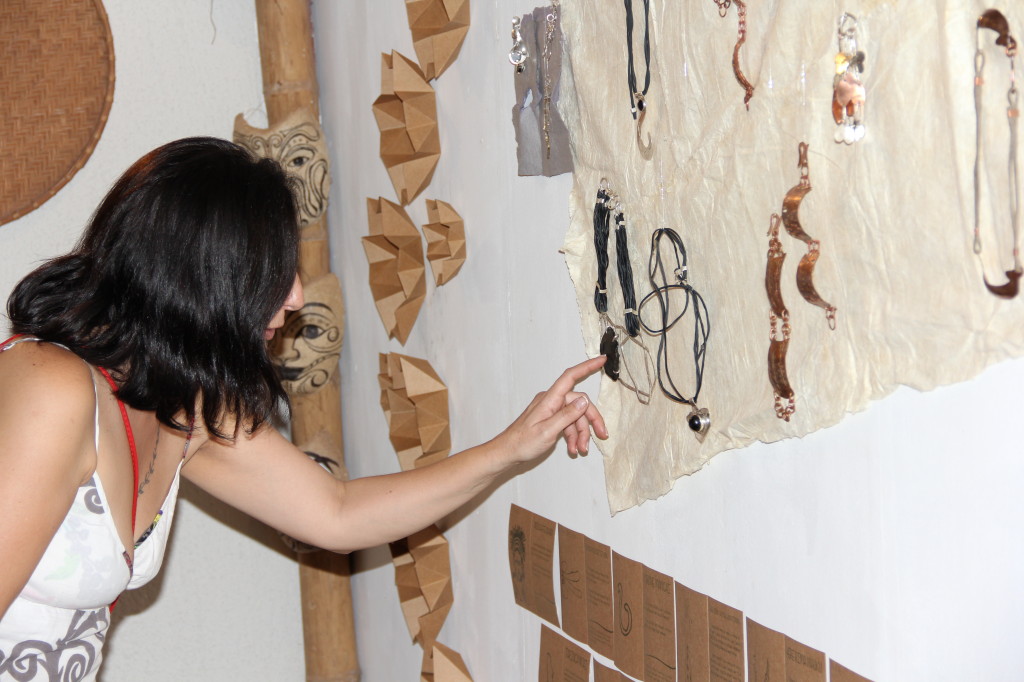 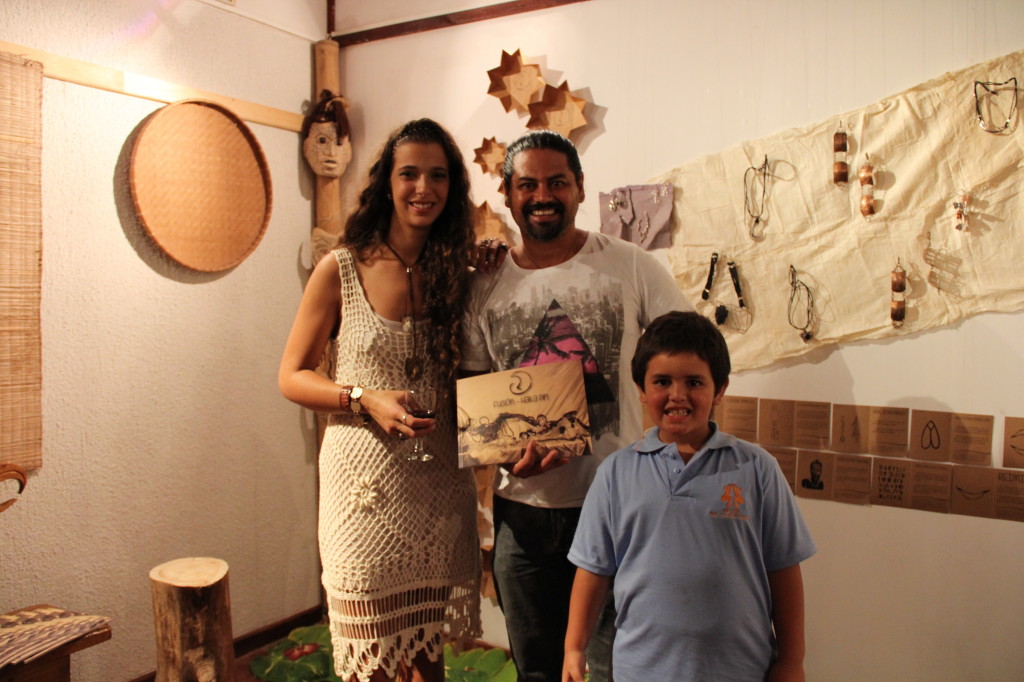 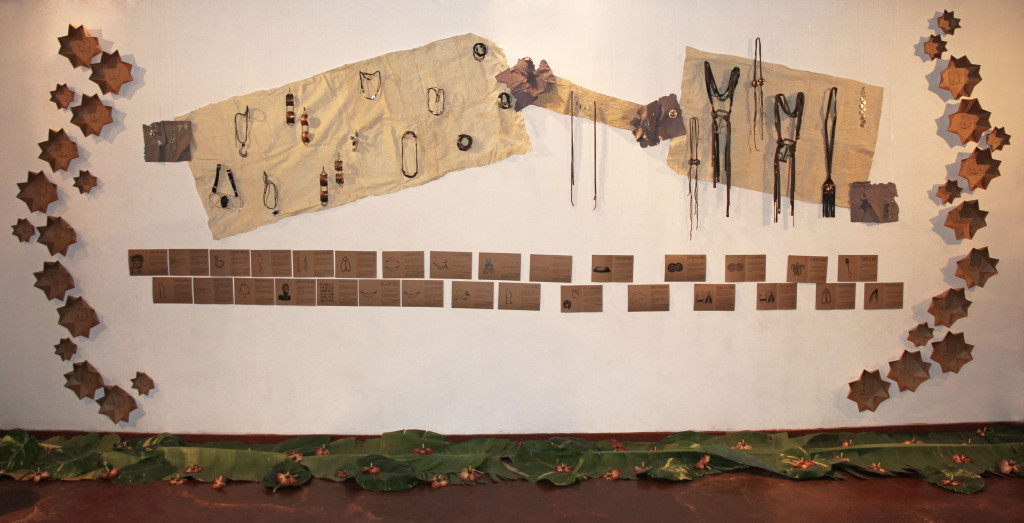 Interalia Magazine has decided to publish Tere Chad’s project to coincide with the February 2017 issue, which is specifically dedicated to patterns. Bene Tuki defines ‘Fusión – Haka Piri’ as an ‘artwork that tries to gather new and ancestral elements.’ What is interesting about Easter Island patterns is their uniqueness; the culture is so isolated that they almost did not have external influence, so there is no other place in the world with something similar. Maybe there is something in the duality of the figures that has a low similarity with Asian cultures, which gives argument to prove that Asiatic people populated Polynesia. The duality was expressed through two opposed forces: ‘mana’ (the energy to keep fertility) and ‘tapu’ (the prohibition). Most of the icons, that are available to observe in the goldsmith pieces, are related to sexual motifs. As they really struggled to survive, fertility and sexuality were the centrepieces of their metaphysics.  Still, it is a mystery for archaeologists how it was possible that such an advanced civilization managed to subsist with such scarcity of resources.

Other remarkable aspect of the collection is what Alberto Hotus Chávez, Chairperson of the Council elders in Easter Island, commented about it: ‘You achieved in transforming Rapa Nui rough icons into stylized elements to decorate a woman’s body.’ These words express with accuracy the soul of these pieces that where also exhibited between the 15th of December and 31st of January 2017 at Museo de Artes Decorativas, Santiago, Chile. In that occasion, the Easter Island Rock Band Mito y Fusión Rapa Nui, also participated playing a concert in the museum. 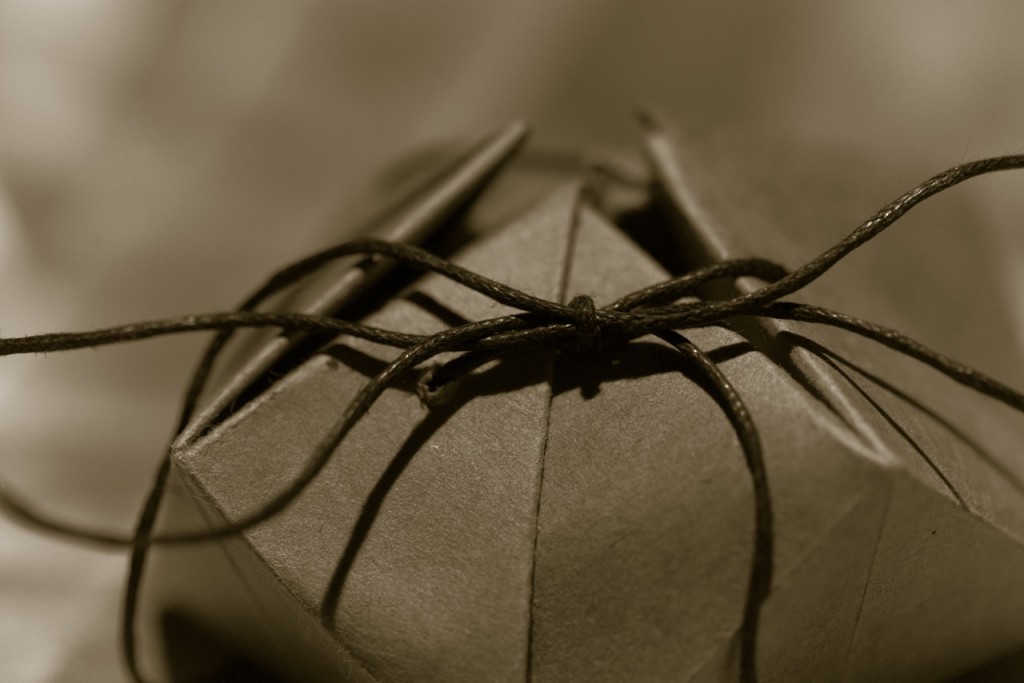 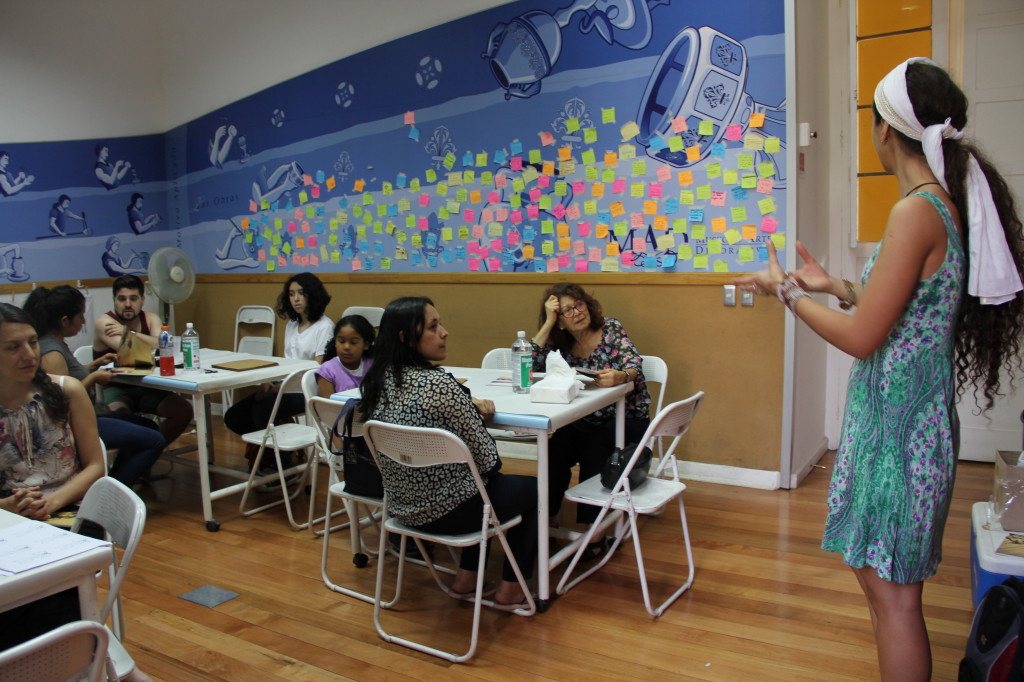 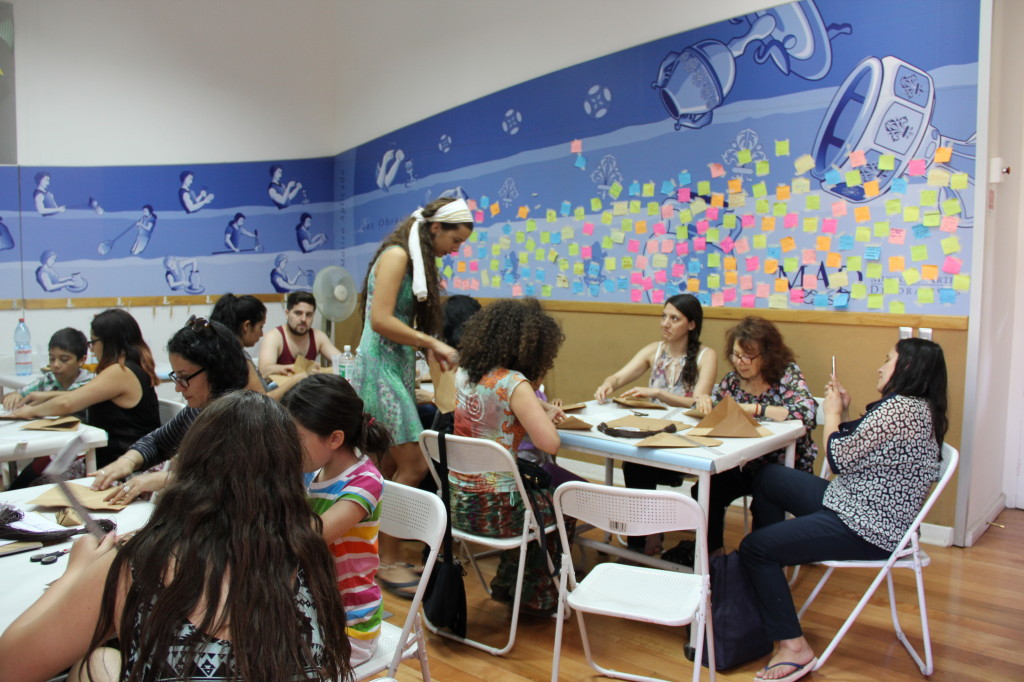 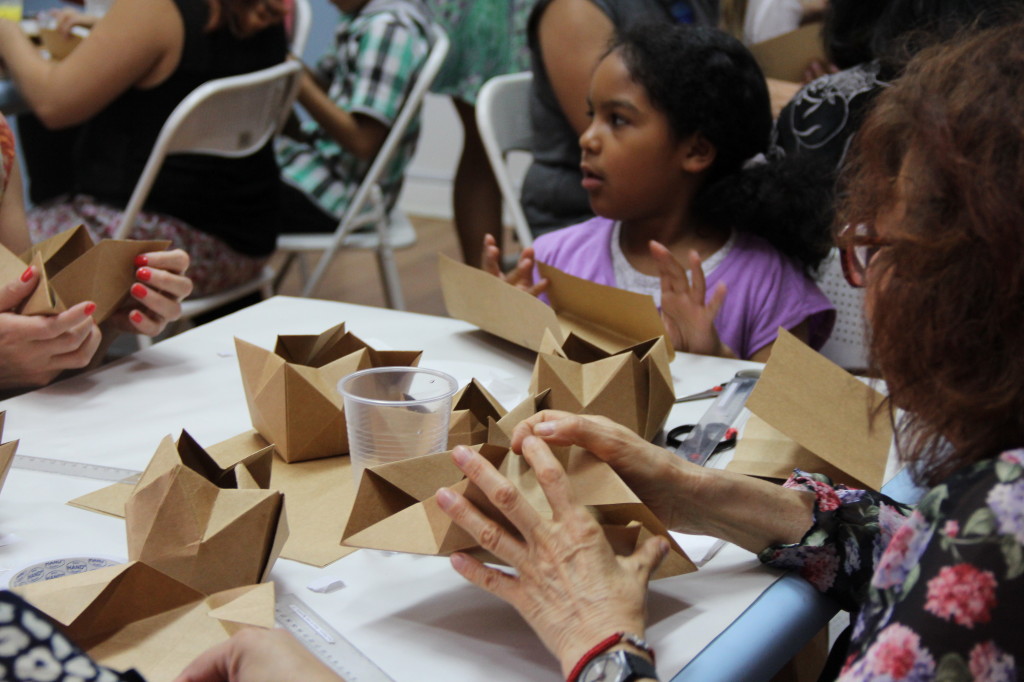 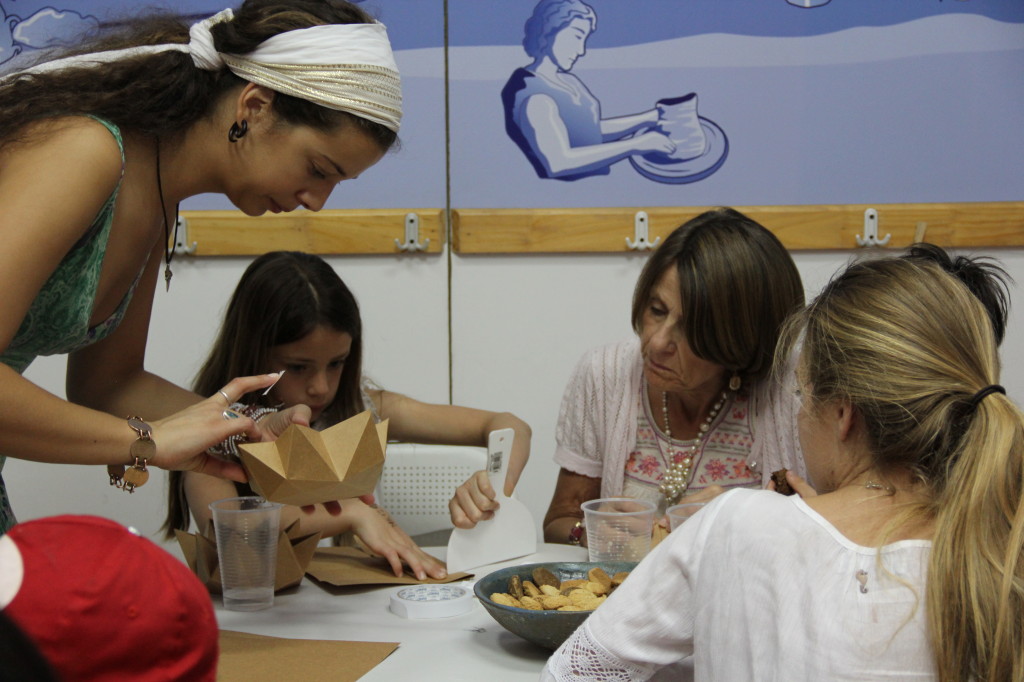 The project was also shown (in its third continent!) at the Tate Modern London, in a Tate Exchange collective exhibition with other Central Saint Martins students. There, the artist had the opportunity to make an origami workshop, to invite the participants to think of new ideas of how to create more sustainable packaging. What is great about the origami box used for her pieces is that she manages to make it with just one sheet of paper, which has been trialled using 100% recycled paper. As Easter Island is the last Island of Polynesia, it has great problems with waste because it receives the repercussions of the other islands’ rubbish coming onto its shores. So the artist resolved this with a more practical, flat and transportable solution that didn’t add pollution to the island. 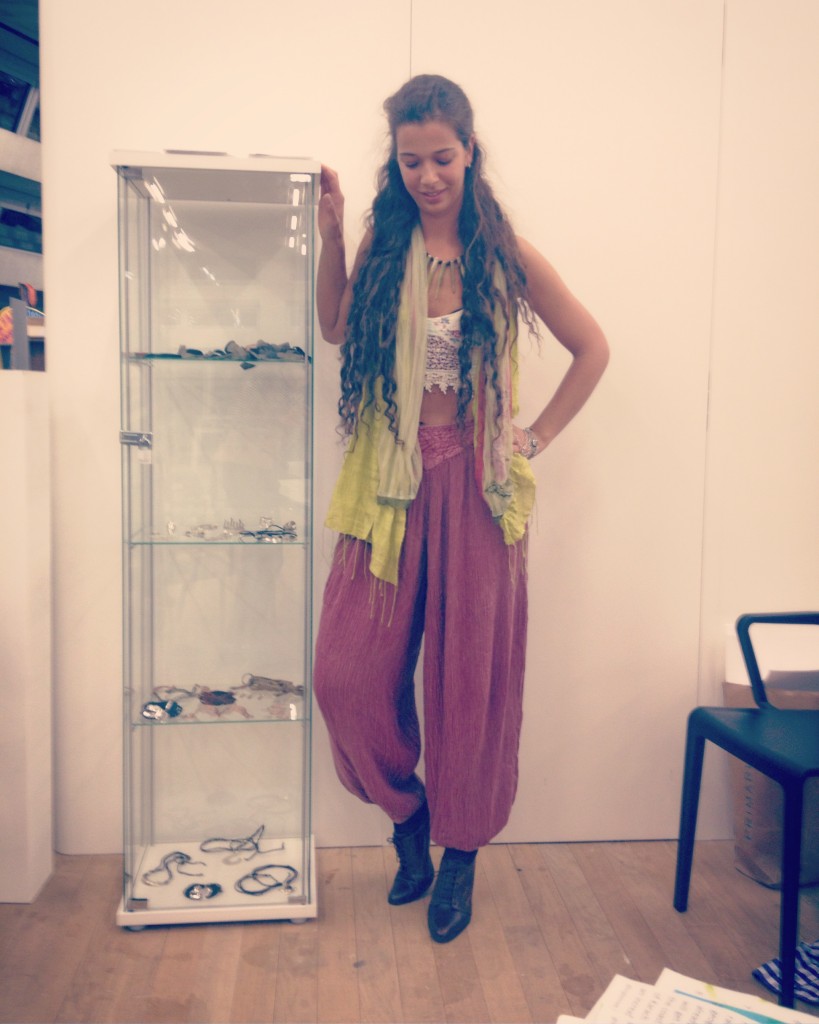 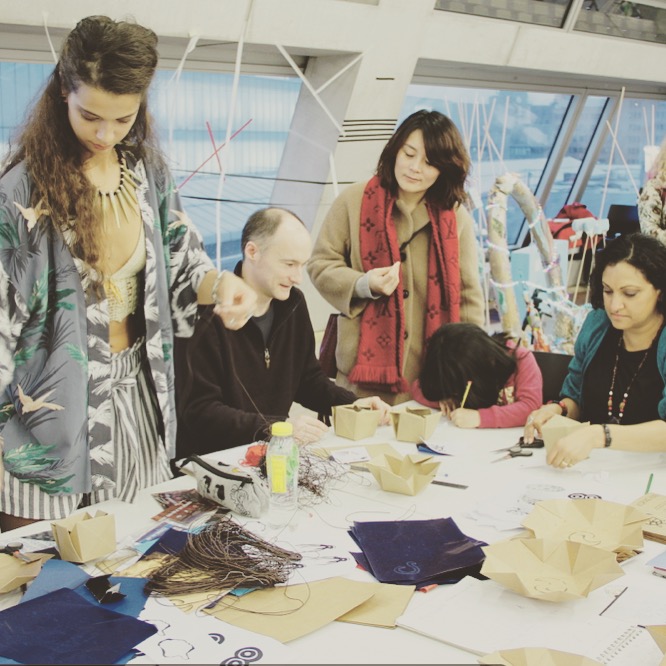 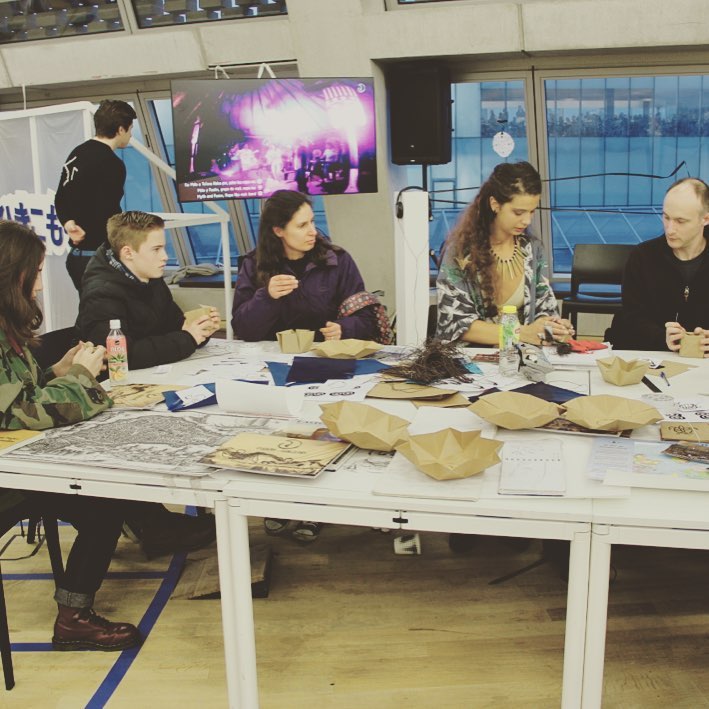 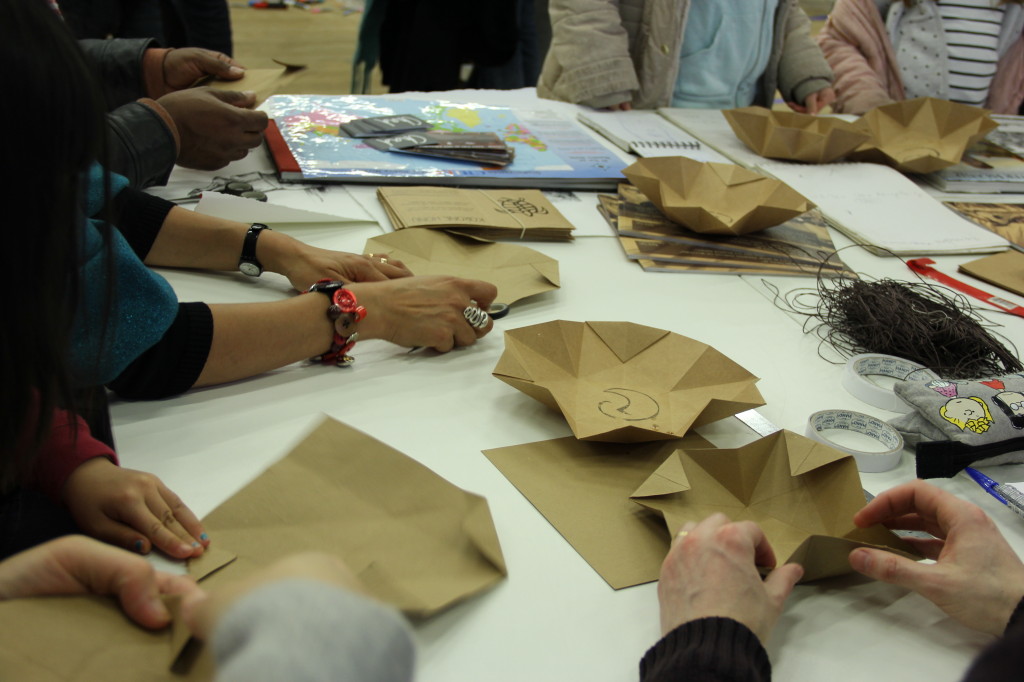 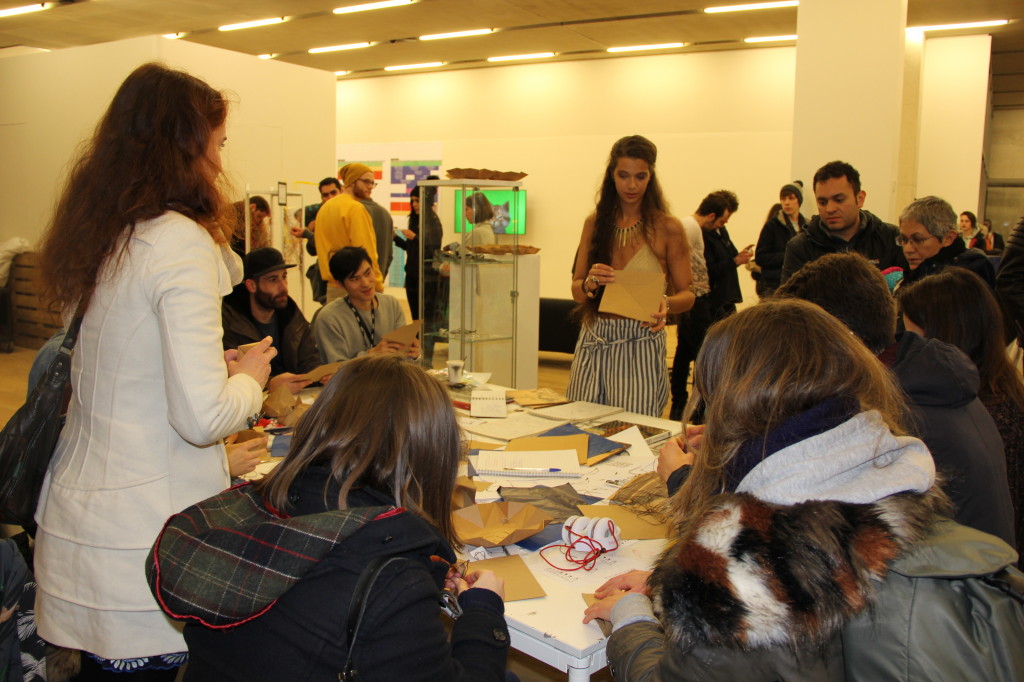 Between the 26th of April and the 19th of May 2017 it will be possible to see this collection open free to public at Chilean Embassy, 37-41 Old Queen St., Westminster, London, SW1H9JA. On the opening on the 25th at 7:00pm, the attendees will be received with Chilean wines and Easter Island’s cakes. Besides ‘Fusión – Haka Piri’ it is also going to be possible to see some native works of Juan Carlos Araki and Cristián Arévalo Pakarati. ‘We are thankful for your supporting us to preserve our Rapa Nui heritage. I’ve spent all my life doing this,’ mentions Cristián Arévalo Pakarati, Graphic designer, Co-director of the EISP, a project that University of Los Angeles, California has been developing for nearly half a century.

It will be a magnificent event to delve into Easter Island’s cultural magic, a unique place in the world with thousands of mysteries to discover that maybe we are never going to be able to explain. In a world almost obsessed with certainties, the curation challenges the spectator to leave space for scepticism, because perhaps there is not always a need to answer everything.