‘Midwinter, the red sun on the brink of the tree far side

Of the valley. We sit, she and I, in the frozen wide-eyed

Silence, watch the living come-and-go of our breath.’

John Moat, extract from Coda 4. Read the full poem and listen to an audio recording on the Poetry Archive.

John Moat is a novelist, poet and artist, who views his role as that of an alchemist and a journeyman. His work captures an intense awareness of the natural world and yet remains light at heart and full of wit. The Poetry Archive describes him as ‘His relation to the world is as the singer to his song, in which the music elevates the lyric’. 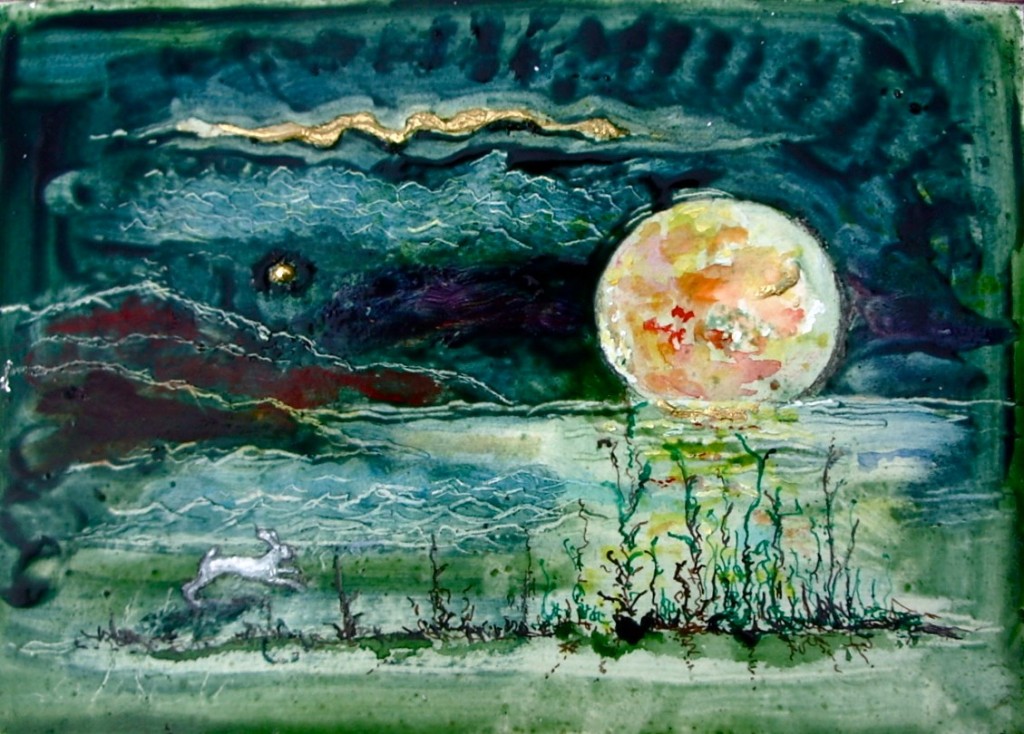 ‘Something is seen, in the mind’s eye, in the actual eye – shape and colour and a feeling. For me, two categories: one the imagery that startles from within, quite often material unused in a piece of writing which to claim an available emptiness magically switches medium and appears as image; the other the external image, a flower or whatever, that leaps out and hijacks a little emptiness whose existence, or non-existence, I’d never suspected.’ John Moat

‘The unique story you have to tell is essential to the completion of the all-inclusive story of the universe’. John Moat.

In addition to this; he founded Tandem, a teacher’s and artist’s alliance; founder trustee of Yarner Trust, an organisation which offers training for organic small holdings; a former director of the Environmental Research Association; founder of the Extension Trust, an arts and education charity; and for more than 20 years has written for Resurgence, a leading international alternative magazine.

Ted Hughes about Mai’s Wedding:
‘It’s a great test of the writing, but in a narrative style where the movement is slow – shadow of Patrick White almost – and with a jungle profusion of atmospheric tendrils and wafts and odours, I never felt any page was too long. The very full accounts of moments and details and fleeting awarenesses somehow justify themselves. One’s eye never lifts from what seems to be an actuality – very present and very urgent. Surely that’s what good writing is.’

‘In all of John Moat’s work, there is an extraordinary sense of place which is home. The house and the garden with its babbling stream take on something more than a literary or even mythic status: they envelop us in a reality which is deeply felt, a kind of breathing source from which the poems derive their peculiar strength – wherever they travel to in this much travelled volume. The presiding imagery of the poems – the haunting presence of an Arab girl, the lost child, the sea, the crackle of firewood or the scent of syringa – gives this selection a binding unity as solid as a stone smoothed in the water scales of the stream. It is very English in atmosphere, as (say) Gerald Finzi’s music is, and this attracts me, too: yet there are few contemporary poets whose work breathes so broadly and generously.’

John Moat’s inspiring articles, The Gist of Arvon,  and  Serious Meditation appear in Celebrating the Imagination

Jessica Beale is a writer, Fine Art graduate and the Newsletter Editor for Interalia Magazine. View all posts with Jessica Beale →