Lindsay Clarke is the author of the Whitbread prize-winning novel Chymical Wedding and has since retold the classical stories of the Iliad and the Odyssey in War at Troy and Return from Troy. His latest work, The Water Theatre, is a story of reconciliation between generations, lovers, the past and the present and between the real world and that of dreams and myths.

His work aims to recapture our link to a mythological past, filling our modern, rational world with dreams, fables and ancient rituals. The physical world unravels to reveal what is in our thoughts and dreams.

In this exclusive interview for The Interalia Centre he discusses themes of mythology and dreams in his work, as well as the imagination’s extraordinary ability to re-imagine classical tales and the world around us.

This thought provoking interview also includes discussions of the transformative and ethical aspects of the imagination and how the imagination can be applied to all areas of life. Concluding with his role in the production of The Gist, a book that ‘Celebrates the Imagination’. 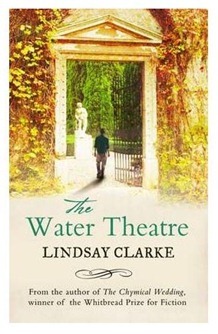 The Water Theatre is set in the 20th century and yet ancient tales and fables permeate the narrative. What hold do think this time has on the present?

Ancient myths and folk-tales still have a strong hold on our imaginations because their motifs and structure correspond to the archetypal structure of the human mind – the software with which we all come issued and which has not changed in millions of years. They are like maps to the psyche and deal with what James Joyce once called ‘the grave and constant’ themes of our lives, those issues and questions of life and death which cannot be answered by reason alone. Freud and Jung found them to be invaluable guides in their exploratory studies of the unconscious, and the popular appeal of contemporary stories such as The Lord of the Rings and Star Wars arises from the fact that they are so closely related to them. My use of them in The Water Theatre seeks to offer a countervailing force to the rational materialism and literalistic thinking which dominates the culture of our time.

You said in an interview that a dream about your father is the starting point for The Water Theatre. In the novel, Martin Crowther has that dream, so in a way is the character of Martin based on you?

Along with the dream I also saddled Martin Crowther with certain aspects of my own background and youth, but the narrative of the book is fictional and he is not intended as a self-portrait even though you might say that we are closely related. Novelists tend to recognize that we are all multi-dimensional creatures even if we tend to rely heavily on certain aspects of our personalities, So when reading a novel it’s probably best to think of all the characters as aspects of the author’s own psyche – male and female, good and wicked alike.

Dreams feature strongly in both The Water Theatre and Chymical Wedding. What is it about dreams that spark your imagination?

It’s been estimated that we spend around six years of our lives dreaming, which is a considerable investment of time, so something important to our welfare is going on there. Dream images give us access to what is going on beneath the consciously managed aspects of our lives, and those unconscious forces can play havoc with us, leading us into violence, for example, or stupid affairs, if we don’t try to bring them into consciousness and relate to them more creatively. Both The Chymical Wedding and The Water Theatre arose out of my attempts to understand significant dreams, which had a powerful impact on my waking life. The archetypal psychologist James Hillman insists that our ‘dreams mean well by us,’ and the poet Yeats declared that ‘In dreams begins responsibility.’ It’s deeply rewarding to pay attention to our dreams and sometimes disastrous to ignore what they are saying.

In The War at Troy and Return From Troy you retell the story of The Iliad and The Odyssey. Do you find that retelling a classical story is restricting to the imagination? Or, in freeing you from thinking about the plot, are you left to imagine everything else in more detail?

Both my Troy books are about 500 pages long yet I wrote each of them in about six weeks. Normally a novel takes me years to write, so I can account for the speed of production only by the fact that I didn’t have to make up the story. In fact my imagination was freed to concentrate on re-imagining it and it gave me enormous pleasure to do so. Without intending any ridiculous comparisons, I think the process showed me something of how Shakespeare was able to write 37 brilliant plays in a relatively short working life – the plot-lines were already familiar to him and he was free to let his marvellous poetic imagination move through them at speed.

In order to write the Troy books I re-read both the Iliad and the Odysseyalong with some of the Greek plays and parts of Ovid’s Metamorphoses, but it was a re-reading of Robert Graves’ The Greek Myths that provided me with a narrative line to guide me through the whole epic. The Iliad deals with only a part of the story of the Trojan War, and in the process of reading Graves I was reminded of many other related stories, which make up a more complete picture. My treatment of the Odyssey differs considerably from Homer’s because I was writing implicitly about the Vietnam War or the Gulf War as well as the Trojan War and wanted to make a psychological study of the devastating impact of war on the life of an intelligent man. For that reason the more mythological aspects of Homer’s account become in my book features of Odysseus’ dreams. What I think I discovered in the process were the outlines of a story behind Homer’s story, one in which the values of the feminine principle are as important (and at times more so) than those of the masculine world.

How significant do you think mythology is to the way we develop ideas and characters in literature today?

It depends what kind of fiction you’re trying to write. Much contemporary fiction fits into the genre of social and psychological realism, dealing with the lives and dilemmas of men and women in current circumstances according to the prevailing values of the age, and mythological thinking doesn’t get much attention there. In science fiction or fantasy writing, however, it’s obviously hugely important – as it is also in the kind of novel I try to write where the waking experience of the characters is interrogated by the activity of the unconscious, and where, as I suggested earlier, the archetypal values of the mythic imagination offer a countervailing force to the prevailing culture of intellectual scepticism. Such elements draw the reader into the realm of the mysterious and perhaps also into intimations of the sacred nature of life, and it’s my contention (unsupported by my sales figures) that, in times like these, there is a largely unanswered need for serious fiction of that exploratory nature.

Why do you think it is important to bring together lots of different disciplines in a festival like this?

We are living through difficult transitional times when many of the old ways of doing things have come under serious question. We can no longer trust our politicians and political structures, our financial system, our media, our social welfare and health services. The legal and education systems, even our food, and it will require the best of our imaginative thinking to come up with creative responses to such a situation. For this reason it seems to make sense to encourage innovative thinking energized by the imagination in many areas. That’s why we’re celebrating the imagination here in the way we are.

What do you mean by the word ‘imagination’ and, in particular, the ‘ethical imagination’?

Imagination isn’t just about the arts – it underpins every aspect of our lives. I agree with Coleridge who said that ‘Imagination is the Prime Agent of Perception’ and with William Blake who felt that life itself is ‘one continuous vision of Fancy and Imagination.’ We imagine the world into being according to the stories we tell about it. The way we imagine things creates the very reality within which we have to live, which is to say that reality is porous to the imagination and we can change things by re-imagining them. Also it’s important to remember that imagination has two aspects ’ the inventive aspect, which allows us to tell whatever kind of story we like, and the ethical or compassionate aspect which allows us to see, feel and understand how it is for others than ourselves. This ethical aspect is vital for the creation of a humane environment, and those stories which fail to give it full attention can be dangerous. As Yeats warned, if we feed our hearts on fantasies, our hearts grow brutal from the fare.

Can you say something about The Gist?

The Gist: A Celebration of the Imagination grew out of the desire to honour the work of John Moat, the poet and novelist who co-founded the Arvon Foundation, this country’s leading Creative Writing organization which has enriched and transformed the lives of thousands of people. John shares my faith in the power of the imagination as a benign agent of change and he is revered by many of our leading writers. For that reason it was an easy matter to persuade a number of them (including Seamus Heaney, Andrew Motion, Alice Oswald and Carol Ann Duffy) to freely contribute pieces celebrating the imagination. The book became the starting point for thinking about this current event. All proceeds from its sale go to the funds of the Arvon Foundation and it is available from www.thewritefactor.co.uk. I strongly recommend it to anyone who cares about the imaginative life.

Jessica Beale is a writer, Fine Art graduate and the Newsletter Editor for Interalia Magazine. View all posts with Jessica Beale →