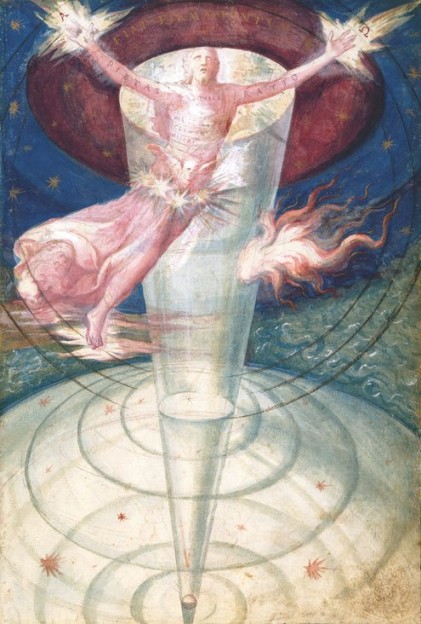 The universe is conjured into existence by an omnipresent creator. The 1573 image is the creation of the Portuguese artist Francisco de Holanda and one of hundreds in the book “Cosmigraphics: Picturing Space Through Time.” Credit Biblioteca Nacional de España

Four elegantly cloaked, well-shod gentlemen in idiosyncratic caps peer through what seems to be a porthole at distant Earth — a planet so spiky with spires as to look machine-made. Their diverse headgear suggests differing national origins, with a turban wearer just visible to the far left.

The overall tenor of the scene — the brilliant sun above, a pale crescent moon below the terrestrial sphere — suggests that these are the great astronomers of history, engaged in discussions about the design of the universe. They’re positioned, however, on a weedy slope, which raises a question: Where are they, exactly?

The picture comes from a 15th-century French translation of the 1240 work “De Proprietatibus Rerum” (“On the Properties of Things”), by one Bartholomeus Anglicus, among the earliest forerunners of the modern encyclopedia.

I came upon it while surfing through early books on the website of the National Library of France; the image was a low-resolution black-and-white scan, but even that view was revelatory: at once enigmatic and precise, a 600-year-old proto-science-fiction rendering of the cosmos. The image, by an anonymous artist, is one of about 300 in my new book, “Cosmigraphics: Picturing Space Through Time,” being published Tuesday by Abrams — a survey of about 4,000 years of attempts to represent the universe in graphic form, whether in manuscripts, paintings, prints, books or broadsheets, all the way up to 21st-century supercomputer simulations of galaxy groups in flux and sunspots in bloom.

A symbiotic relationship between representation and understanding is evident throughout, with the latter not necessarily preceding the former. Graphic images need not be mere illustrations of concepts described in texts or equations; they can be an important form of knowledge in their own right. In “Laniakea Supercluster,” for example, the astronomer R. Brent Tully uses a supercomputer to visualize gravitational flow lines knitting together an echoing expanse of space-time more than 500 million light-years in diameter. In this as in other pictures selected for the book, the image was the discovery. 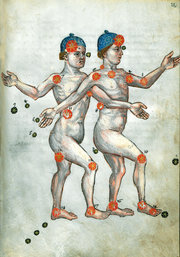 An image of Gemini, as depicted in a 15th century edition of a book by the Persian astronomer Abd al-Rahman al-Sufi. Credit Forschungbibliothek Gotha

“Cosmigraphics” begins at the beginning — Day 1, creation, an address from which many visual depictions of the universe begin. Perhaps the most extraordinary set of pictures depicting space-time’s origins dates from 1573. Discovered in the mid-20th century in an obscure notebook in the National Library of Spain, it was painted by the Portuguese artist and philosopher Francisco de Holanda, a student and lifelong friend of Michelangelo.

In his first image, a set of elongated triangles represents the holy trinity, with the Greek letters alpha and omega on top and “Fiat Lux” (“let there be light”) just below. Swathed in flames, they extend down into a kind of clay vessel. Although clearly positioned within representational art of a particularly mystical kind, de Holanda’s triangular and circular forms seem simultaneously to anticipate early-20th-century abstraction — for example, Kazimir Malevich’s geometric Suprematist paintings. They’re startlingly modern.

The second notebook page, by contrast, seems to predict another singular genius: William Blake, whom it predates by two centuries. Here the Creator, belted by stars, has assumed a material form. The previously opaque vessel below is now transparent, and centered on a single planet. It has become the multiple nested crystalline spheres that for more than 15 centuries were thought to carry the planets, the sun and the moon on their courses, with Earth at their nucleus. This cosmological design, several variations of which can be seen in “Cosmigraphics,” was first proposed by Aristotle, and later modified and expanded by Ptolemy in the second century A.D. 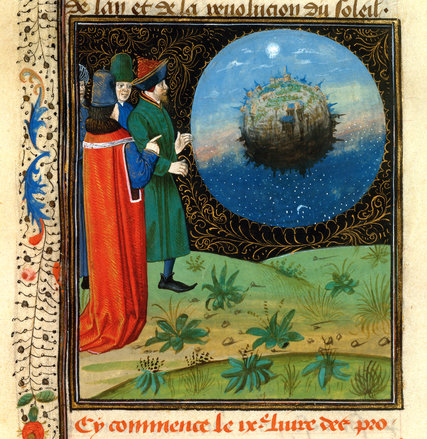 A 15th century rendering of Earth as a weightless, studded sphere. Credit National Library of France

Finally, de Holanda depicts a geometry of turning forms set in motion by God’s luminescent command. A giant sun pinions tiny Earth in a shadow-casting ray. While this work also vibrates with precursor elements to 20th-century avant-garde art, it contains an even more remarkable insight: Although the sun nominally rotates around Earth — the old geocentric universe of Aristotle and Ptolemy — in fact it dominates the picture, suggesting that the artist has subliminally grasped that it is the true center of our planetary system.

The image is one of several medieval and Renaissance depictions of cosmic design that seem to exhibit a kind of precognitive intuition of what Nicolaus Copernicus proposed in 1543 — the revolutionary notion of a heliocentric planetary system. (While de Holanda painted 30 years after Copernicus’s death, heliocentrism didn’t become accepted for at least another century, and it’s unlikely the artist meant to advocate it, if he even knew of it.)

The visual legacy encompassed by “Cosmigraphics” documents multiple stages of our evolving understanding as a species — a gradually dawning, forever incomplete situational awareness about the cosmos and our place within it, rising across millenniums. The book’s overarching subject is our emergence as conscious beings within an unimaginably vast and cryptic universe, one that doesn’t necessarily guard its secrets willfully, but doesn’t hand out codebooks either.

Among the narrative threads woven into the book are the 18th-century visual meditations on the possible design of the Milky Way — including the astonishing work of the undeservedly obscure English astronomer Thomas Wright, who in 1750 reasoned his way to (and illustrated) the flattened-disk form of our galaxy. In a book stuffed with exquisite mezzotint plates, Wright also conceived of another revolutionary concept: a multigalaxy cosmos. All of this a quarter-century before the American Revolution, at a time when the Milky Way was thought to constitute the entirety of the universe. 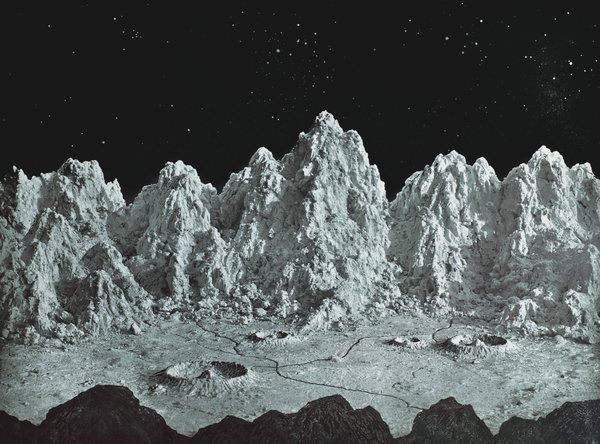 1874: Lunar mountains, which in an era before space travel were thought to be extremely rugged. Credit The Wolbach Library, Harvard

Wright’s vision was one seed from which our knowledge of billions of galaxies sprouted. “Cosmigraphics” traverses 16th- and 19th-century depictions of comets and eclipses, presents intensely colorful space-age planetary geological maps, and ultimately arrives at our contemporary understanding of space-time, in which whirling star-spirals glint all the way to the fading edge of the visible. But while the center doesn’t hold in this vision, neither does anarchy: We’re left with a spongiform universe of galaxy clusters foaming along weblike filaments of dark matter, which in turn extend between nodes of particularly bright high-mass concentrations. It all looks rather like a visualization of the Internet.

So where will it all end? “Cosmigraphics” concludes with a 14th-century vision of weightlessness. As with de Holanda’s notebook, it was discovered only in the mid-20th century, when restorers removed plaster from the ceiling of one of the outstanding surviving churches of Byzantium, Chora Church in Istanbul. This fresco depicting a human figure (evidently wearing a supernatural kind of space helmet) has become known as “The Angel of the Lord Rolling Up the Scroll of Heaven at the End of Time.” 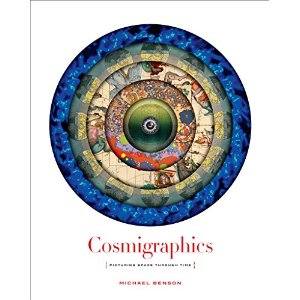 Cosmigraphics: Our Changing Pictures of Space Through Time

Michael Benson works at the intersection of art and science. A photographer, writer, filmmaker, book-maker, and exhibitions producer, in the last decade he has staged a series of increasingly large-scale shows of planetary landscape photography internationally. Benson takes raw data from NASA and European Space Agency archives and processes it, creating large-format landscapes. He edits, composites, then frequently mosaics, and then finally optimizes these images, producing seamless digital C prints of landscapes beyond direct human experience. He is also an award-winning filmmaker, with work that straddles the boundary between fiction and documentary practice. http://michael-benson.net/ View all posts with Michael Benson →