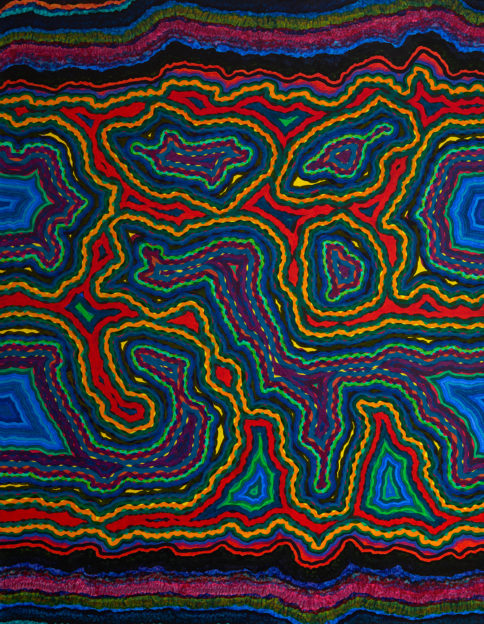 Richard Bright: Can we begin by saying something about your background?

William Holton: I spent my childhood in rural East Tennesse. My family lived on a cul-de-sac that was surrounded by woods and nature that us kids would play in and explore often. My father was a professor of Botany at the local university and he instilled in me an appreciation for science and nature at an early age. I didn’t realize it at the time but my mother introduced me to what an artist studio and practice could be. She was an elementary school teacher but also a potter, with a room that had a wheel and a kiln.

I drew a lot like most kids but never considered the possibility of becoming an artist until I moved away to attend college at the University of Arizona, where I majored in Aeronautical Engineering. I took a beginning drawing class as an elective with the first of a handful of wonderful teachers I would meet during my college years. The teacher was the artist Sheila Pitt and she convinced me to take more art classes. By the second semester I had changed my major to art and subsequently transferred to what was then called the Atlanta College of Art. There I earned a BFA in painting and printmaking and began my artmaking practice. The figurative work I was doing in school slowly evolved to imaginary landscapes and eventually a kind of process-oriented abstraction.

In 2001 I attended the Vermont Studio Center for a month-long residency. I was lucky enough to meet John Moore, who was head of the graduate painting department at the University of Pennsylvania at the time. He was a visiting artist and during a studio visit he convinced me to apply there for graduate school. I received an MFA from Penn in 2003, moved to New York and have lived and worked here since. 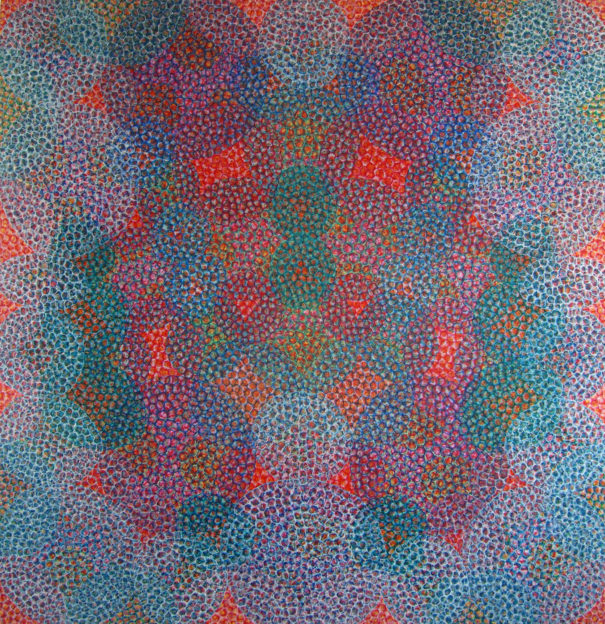 WH: An early influence would be Mondrian’s series of paintings and drawings of trees which I came across as an art student in which he simplified and reduced the tree using cubist principles of the time. The image of the tree is slowly distilled to its essence of collective forms. Eventually the forms come fully forward and the tree disappears altogether. I found this fascinating because it exemplified a path toward abstraction that came directly from nature. The series was also an early education in the importance of the space between the forms being as relevant as the forms themselves.

As an art student I was excited about the painter Susan Rothenberg’s paintings and drawings from the 1980s. She would build up countless individual paint strokes over huge surfaces in what I saw as a process of searching for an image that would emerge from the accumulation of mark making. This process would become a model for me at the time.

Terry Winter’s work from the 1980s had a profound effect on me as well. There was something both scientific and romantic about the forms and structures he painted as well as his process, which included grinding pigments to make his own paint like an alchemist.

More recently the artist Thomas Nozkowski gave me faith in the possibilities of abstract painting again. When I discovered his work in the early 2000s, I was disenchanted with what I was aware of as being abstract painting at the time. His work was excitingly original to me and showed me that abstraction was not at some endgame, that tropes need not be rehashed over and over because the possibilities of abstraction are endless. 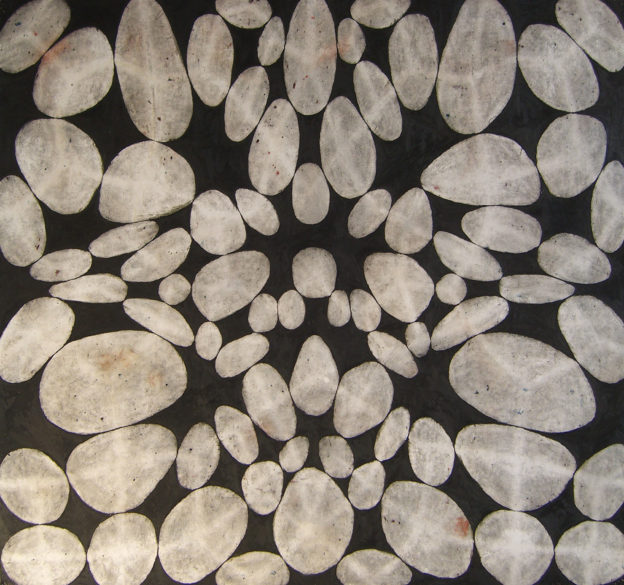 WH: I think the underlying focus of my work is simply that of discovery. I want to see what happens next. The evolution of each work is like a visual adventure I go on with what I am making at the time. I use the tools I have found or invented along the way in making all the works that came before. The physical tools have included a can of compressed air or my fingerprint as well as the repetitive forms within the works themselves such as dots or spirals or an overlapping edge.

I try to create a relationship with the work that involves my learning what needs to be done next by “listening” to the painting visually. As much as possible I attempt to take my ego out of the process and let the painting become what becomes. One of the first ways of doing this is to use a found stretcher to begin the painting with. The hope is to make something both compellingly simple and complex at the same time. 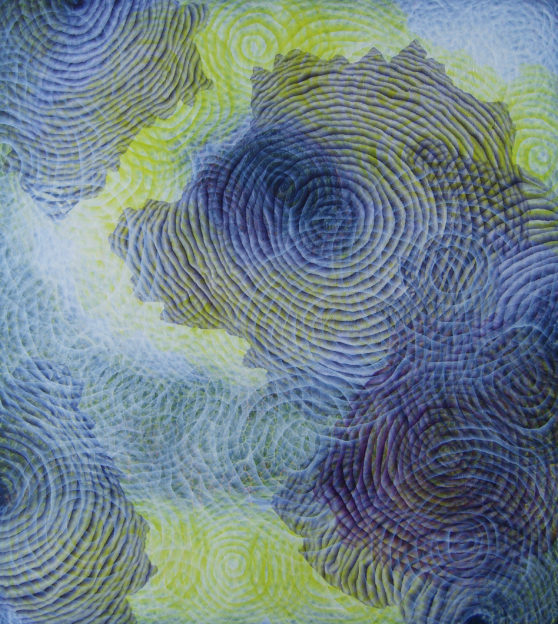 RB: What is the relationship between your drawing and your painting? Can you say something about your working process in the creation of your artworks?

WH: I seem to go back and forth between focusing on painting and drawing. Before graduate school I was almost entirely painting. I had discovered Yayoi Kusama’s net paintings that she began making in the 1950’s and started a process that incorporated drawing directly into my painted surface. I would coat a patch at a time of acrylic medium on a surface and draw my own kind of continuous net pattern into the wet medium. I would use just enough medium for each patch to be able to fill it with my incised pattern before it dried. Then a patch was done next to that and so on until the entire surface of the canvas was filled. I was beginning to explore the idea of an image as an accumulation of marks or forms over a surface that when pushed far enough, can exhibit a kind of collective behavior that gives the work energy. Soon I became more interested in the space inside each net component and began making dot paintings that further explored the possibilities of accumulation and the transformative power of complexity. 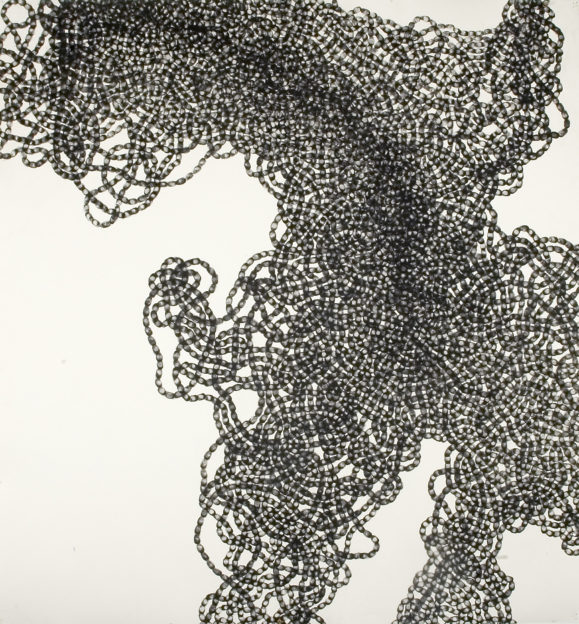 I came out of graduate school primarily focusing on a series of drawings I started there and made for several years. These drawings consisted of the accumulation of charcoal fingerprints that I used as a unit over the surface of large sheets of paper. I was reading about scientific theories like Chaos, Swarm, and Emergence, and discovered Philip Ball’s book The Self-Made Tapestry, which became like a bible to me. I wanted to make a painting that was like a self-regulating system. I think of nature as a grand self-regulating system made up of self-regulating systems within self-regulating systems. This idea of nested systems began to fascinate me. 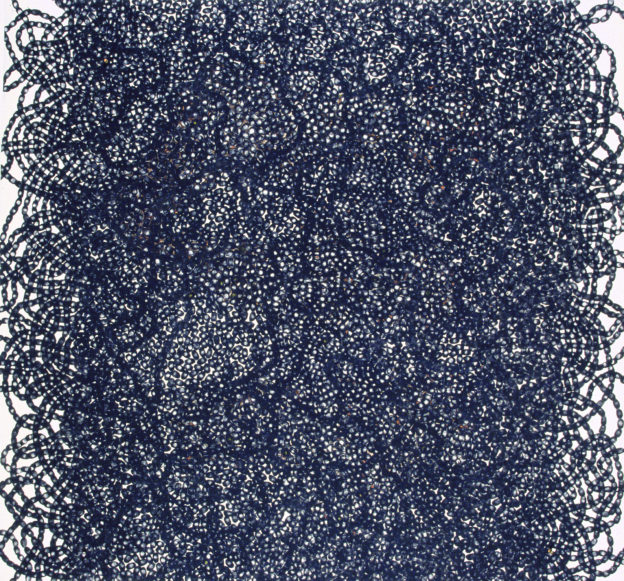 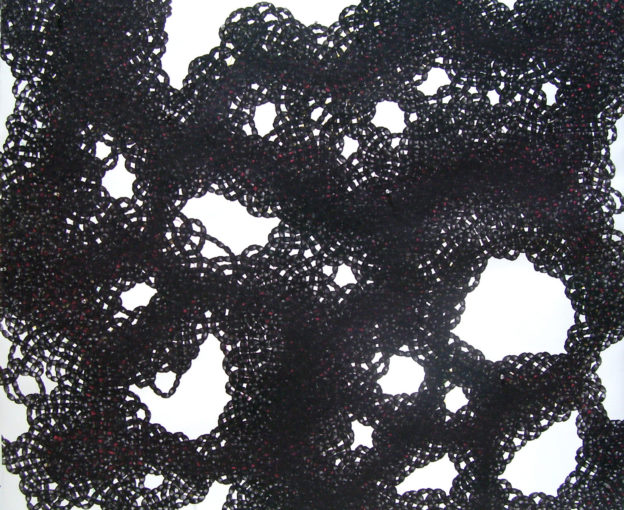 Around 2007 the fingerprint drawings seemed to have gone their course and I was experimenting with ways to get back into painting. One day I had dots of wet paint on a painting and I decided to see what would happen if I blew canned air into the dots. The result was a circle with incredibly intricate patterns I could never have painted with my hand. Eventually the circular unit became a spiral unit that when at the right proximity to another spiral created a new kind of space I couldn’t have imagined. What I love about pushing the paint around without touching it using compressed air is that it is a form of drawing I can do while making a painting.

Recently the spiral has become less important as the main component and now is simply one of the tools I can use when needed. I’ve learned that the forms that result from overlapping and combining spirals are like a fractal coastline and now I use these emergent boundaries to lay down bands of color using a brush that defines yet newer, unexpected forms. 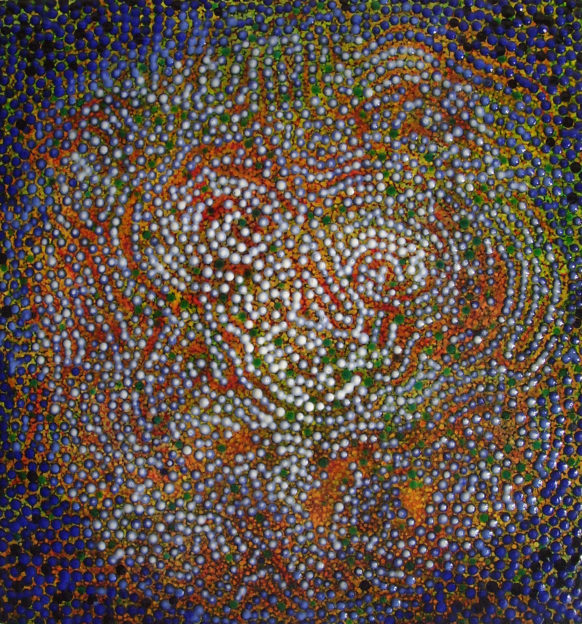 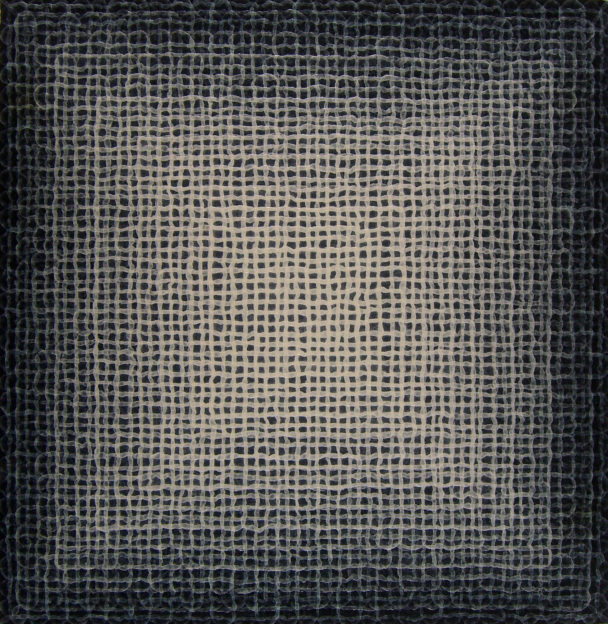 RB: How do the notions of disturbance, movement, repetition and rhythm relate in your artistic practice?

WH: Obsessive, repetitive mark making has been the foundation of my work. The accumulation of units like fingerprints or spirals over the surface of the work builds and grows based on simple loose rules I make that have to do proximity and contingency of units like the murmurations of starlings or the schooling of fish. The collective intelligence of these behaviors in nature is what I am trying to achieve, where the work gains a kind of autonomy. With my help, it becomes what it becomes, not what I want it to become. I think of the idea of disturbance in this context in the way variation drives evolution. The variations I come across as I work inform the direction and evolution of the system of forms as they unfold over the course of making the work. 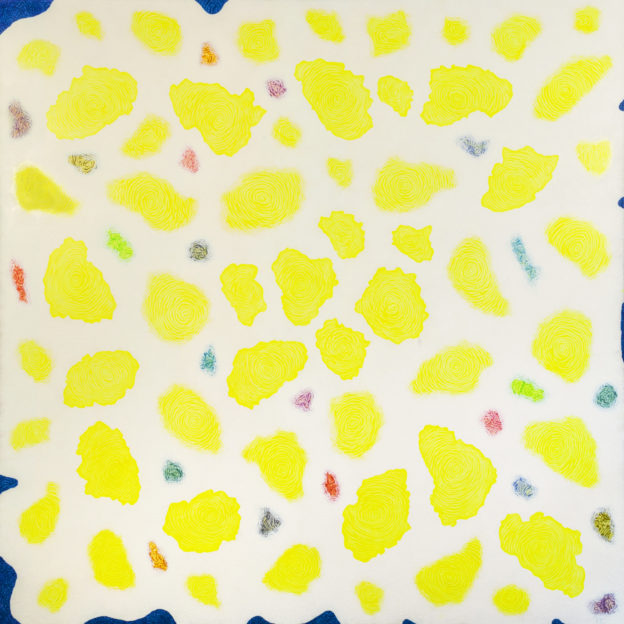 WH: Art and science are both paths of exploration and discovery that humans use to understand the world around them. Experimentation is clearly a place where they intersect. I like to think of Alchemy, the seed of modern science as being a lot like painting. Alchemy involved experimenting and trying new materials and ways of using them to attempt to transform base metals into gold. To me this process is very much like pushing pigment and other material around a surface until a painting is “finished,” “resolved,” or just seems to have become what it was supposed to become to the artist. It has transformed from a collection of inanimate materials on a surface to something that has a kind of life and is capable of moving a viewer, often in ways that words cannot express.

In my own work, I have been inspired by the seemingly unending examples of visual beauty I find in science. Electron clouds fascinate me not only because of the beauty of the forms as science describes them but also the fact of their state of indeterminacy. They are a probability that is both there and not there, depending on how they are observed. I am always trying to achieve this kind of state of simultaneity in my paintings. When I started working with circles instead of dots, I learned about and became obsessed with Penrose Tiling, a form of tessellation of a plane using self-similar forms studied by the physicist Roger Penrose in the 1970’s. Subsequent interest in self-similar forms led to my discovery of the fractal “coastline” edge that I use in my current paintings. 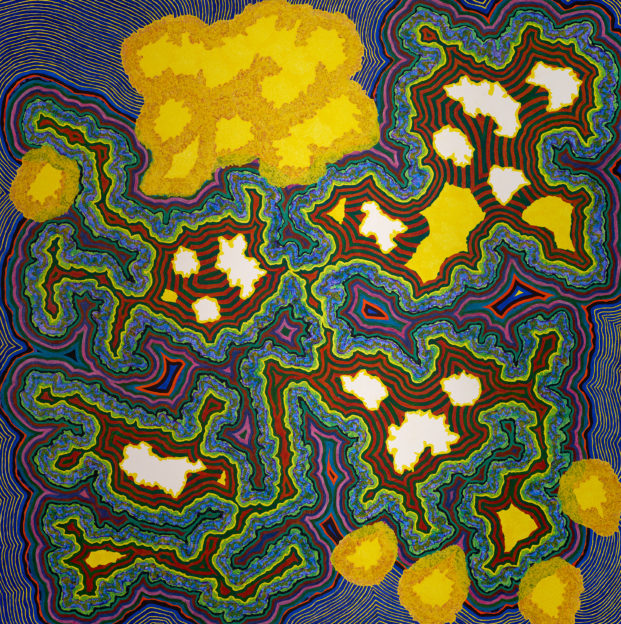 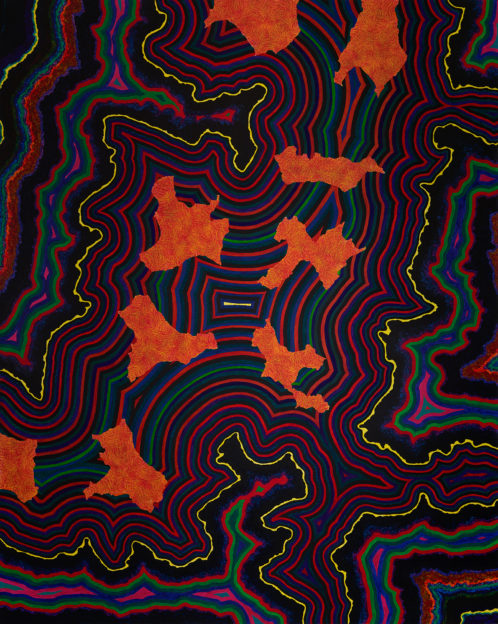 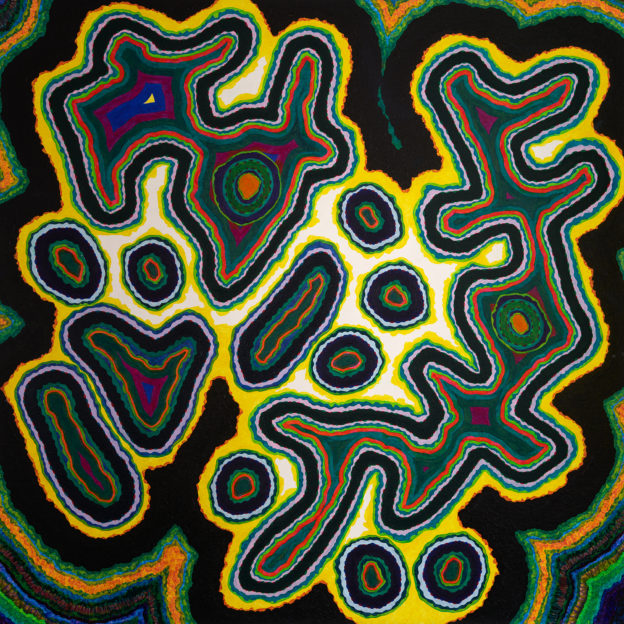 All images copyright and courtesy of William Holton

William Holton received his MFA from the University of Pennsylvania and BFA from the Atlanta College of Art. He has received several awards including a Fellowship Award from the Vermont Studio Center, a merit award from the Hunter Museum of Art, Chattanooga, TN and a Regional Visual Arts Fellowship, Southern Arts Federation/NEA. He has shown nationally and lives and works in Brooklyn, NY. View all posts with William Holton →