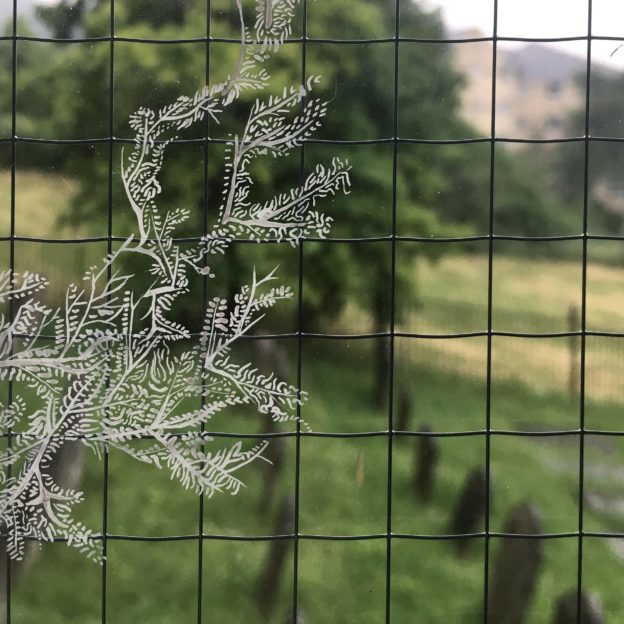 Sophie Erin Cooper: I grew up in rural Wales, in the Brecon Beacon area. My childhood was surrounded by nature and it was a big part of my play growing up. The natural world left a profound imprint on me and It is something which has remained an important source of inspiration for my work. My practice fulfilling a need to continue play in adult life.

Growing up in the countryside has perhaps led me to favour smaller cities, having since lived in Hereford where I studied at Hereford School of Arts, and then Bath – where I’m currently based. I have a BA in Fine Art from Bath Spa University, and although I found my work evolved and shifted greatly over my studies, since graduating 6 years ago my work has predominantly used mark making as a method to create, reveling in the simplicity and accessibility of drawing.

My pieces have varied from flat 2D works to drawings created directly within a space. The latter evolving from an interest in art as an experience. My explorations have also led me to curate exhibitions which investigate displaying artwork in unusual ways – from murals and installations, to hiding artworks within a space.

SEC: My work is influenced by intangible human experience, impermanence, and the natural world.

I collect items from nature – feathers, leaves, seed heads – and their intricacies feed in to my library of marks. Objects from nature are also used as tools or surfaces with my practice.

I find myself captivated by artworks that break expectations with their size, whether incredibly small in their entirety or their details, or large installations which immerse the viewer. These include artists such as Cornelia Parker with her large impactful installations, and Tara Donovan with her everyday objects on mass transformed in to mesmerising landscapes. Although working very differently to myself, these two in particular had a great influence on me – instilling a curiosity to explore the space as somewhere to work within, rather than just a place to display.

Other influences have included artists who use repetition and detail within their work, such as Richard McVetis and Roanna Wells.

Small works make up a large volume of my practice, and I am intrigued by how smaller pieces can hold a presence that is altogether bigger than itself. Large immersive pieces have however influenced me to play with scaling up my work at times – for example Floating Garden, 2016 – a large installation that acted as a drawing in space with plants. 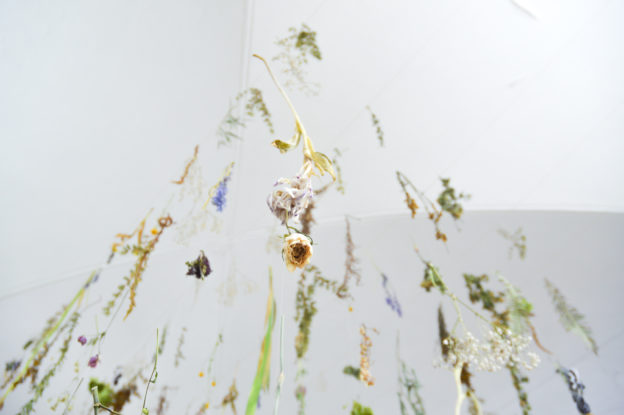 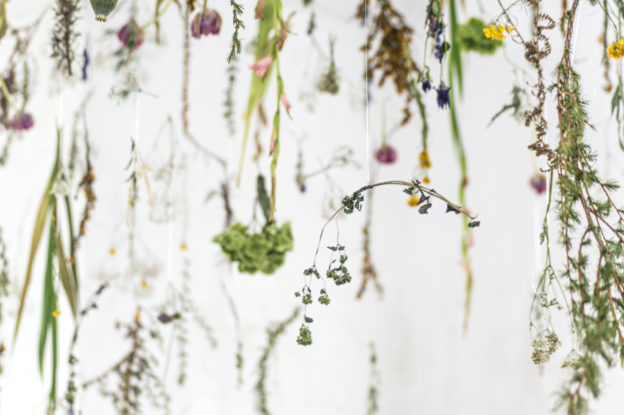 Another piece which looked to be simultaneously large and impactful but intricately small was A Tangent, 2017, spanning great length whilst still remaining small in width, and detail. This piece was drawn directly on the walls, window, and floor of 44AD artspace in Bath, stretching around the gallery. 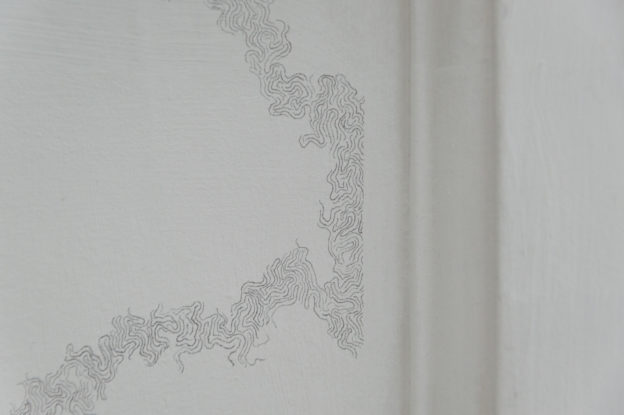 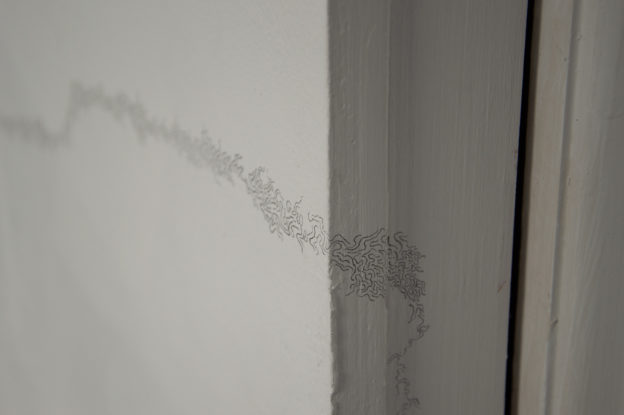 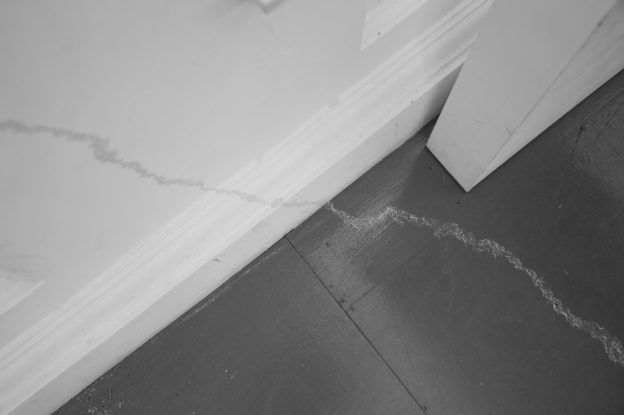 SEC: I am interested in fragility and capturing the essence of beauty in the inconsequential, the fragile, the imperfect. For me this encapsulates something very human; our vulnerabilities and unescapable impermanence.

RB: Can you say something about your working methods?

SEC: My planning of a piece is often quite loose and developed further by experimentation. However I start by considering the ideas which I am exploring or addressing, the marks which will enable me to do this and how a work will interact with a surface or space to achieve this. For example my piece Mark, Touch, Press, 2016 used drawn finger prints on pressed petals to address identity and the human impact on the natural world. Further emphasized with the petals displayed pinned like specimens, but fragile without a cabinet to contain them. This piece was deeply vulnerable yet that was important – to bring it in to the now, and to highlight that vulnerability – in a world where our impact is having detrimental effects. 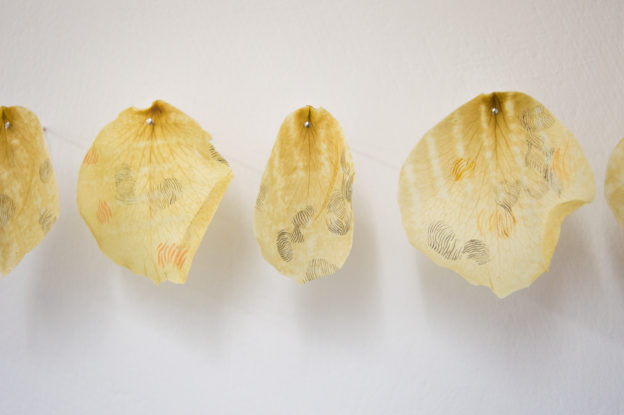 My drawings employ repetitive mark making and sequences, yet the creative process is always intuitive. There is a certain pull between being purposeful and meticulous yet free and organic which feels very human – our need for order and understanding, yet to remain conscious not robotic. I find I enjoy making rules for drawing patterns and then equally enjoy breaking them. For me this echoes the patterns we find in nature, they appear to be there yet in true natural settings we also find patterns not quite comprehensible, seemingly wild and unstructured.

RB: How does the space you create your drawings in determine the work?

SEC: Many of my works have been site specific, using the space itself as a big indicator in the composition of the piece. Some works for example have changed medium across different surfaces – changing from pencil marks on the wall, to pen on the window and paint on the floor. I really enjoy using the imperfections of a space as points of interest and indicators to swerve a drawing away – as if the drawing process is an act of growing something which responds to its environment.

Light can also play a factor in drawings on windows – playing with shadows as a further extension to the drawing – such as in A Fleeting Moment, 2015 in the Control Room, Bristol which is a small building on Redcliffe Bridge which has windows on all sides. 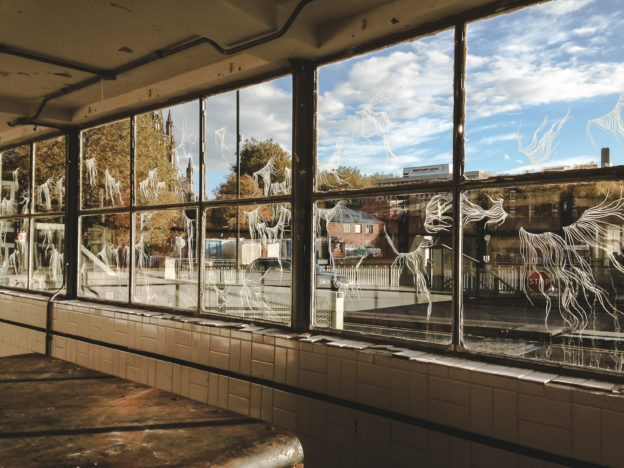 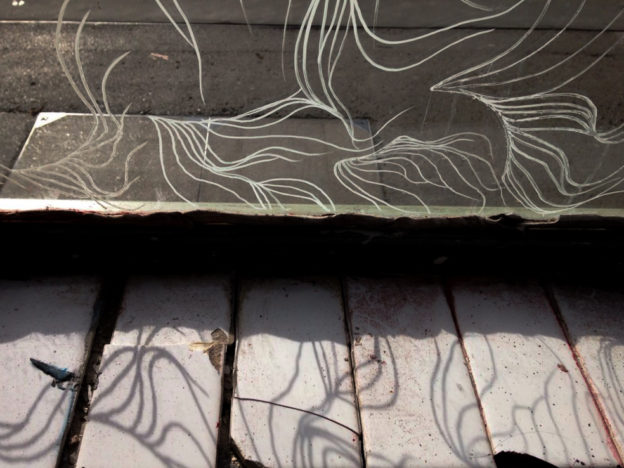 RB: How important is the concept of ‘impermanence’ in your work?

SEC: Although impermanence is not essential for every piece I create, for me it is a large and important part of my practice. The use of natural materials that will decay, and site specific drawings that will be washed away, painted over or erased – the acceptance that the work is temporary is all part of the process. To dedicate a lot of time to something that will not last is reminiscent of life itself, and for me it is an exercise in coming to terms with the temporary nature of everything – our moments, lives, even ourselves.

The ephemeral quality of impermanent works also amplify elements I explore in my practice, such as fragility and art as an experience. To view something with a limited lifespan also plays with the value of that experience, making the viewer one of a finite number who will ever see that work in situ.

My piece A Split Second of Humanity (Phase 2), 2018 which was selected for the Trinity Buoy Wharf Drawing Prize and is currently touring around the UK, is an example of a work created on a fragile and ephemeral material. Using dried eucalyptus leaves as a surface for tiny paintings, the impermanence of these leaves is integral to the work – addressing the relationship between humanity and the natural world. 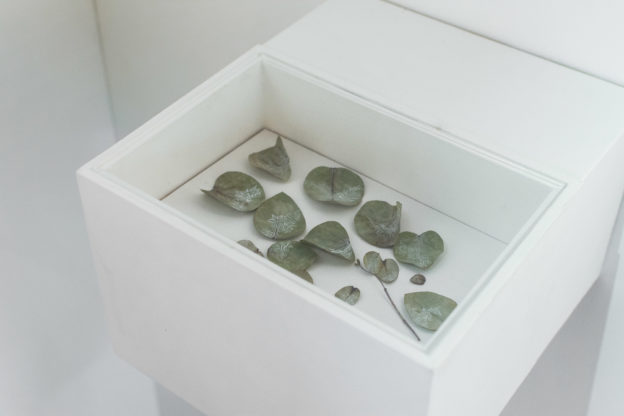 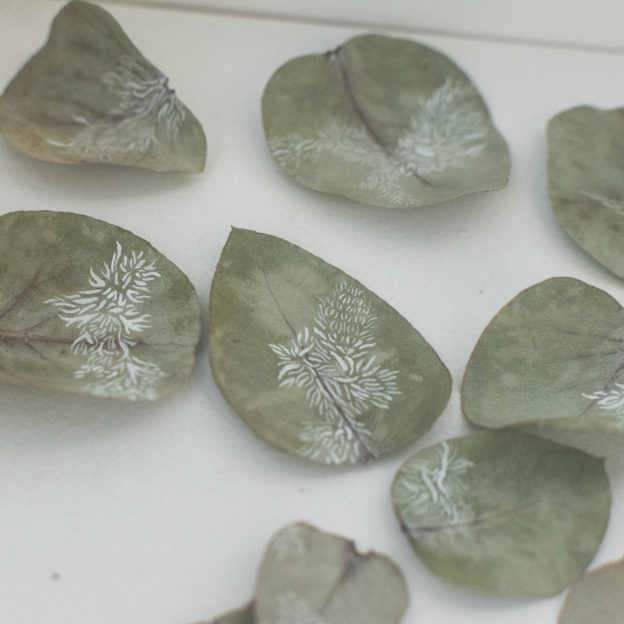 RB: There is the idea of dragan, the old English term for drawing – the idea of something that is dragged across a surface, leaving its trace imprinted. There is also the idea of disegno, being about how we project what something could be. One is about the trace of an experience and the other is about the projection of a potential experience, and sometimes it is in between those two things. How do these ideas resonate with your own drawing practice?

SEC: Both of these concepts resonate with my drawing practice and I feel the idea of both traces and transformation are what brought me to drawing.

I am curious about our imprint, trace and the way that drawing can record, collect and tell a story. Yet I always want to see that mark or story skewed by the artist, whether that gives insight into how they see the world, wish it to be, or a tool to guide the viewers perception.

I would say I play with both dragan and disegno, using the former as a starting point, to begin experimentation until the work transforms into something new – projecting my own ideas on it. I think of my work as a visual language, collecting traces from the world around me to extend and build a new vocabulary.

RB: In terms of the viewer, what are you trying to communicate?

SEC: Although each piece often has its own agenda, my work as a whole looks to remind the viewer to notice the world around them, the tiny details, the inconsequential, and the beauty in fragility and imperfection.

RB: How has your drawing process changed in the past years?

SEC: A lot of my processes have remained the same, yet I have found particular projects have made me work in new ways and challenged the way I create. Although continuing to take inspiration from nature within my work, in the past few years I have also explored another interest – the intangible human experience – such as thought, memory, sense of self, and the passing of time. This is something which has impacted my process, creating works that have been less about experimentation and more concept based. These works have included The Things I Remembered, 2017 – a self-portrait of objects and drawings, and A Split Second of Humanity (Phase One), 2017 a piece which showed a handwritten text of personal thought, the piece both revealing and hiding the text in the scribbles of small handwriting and the creases of the surface. 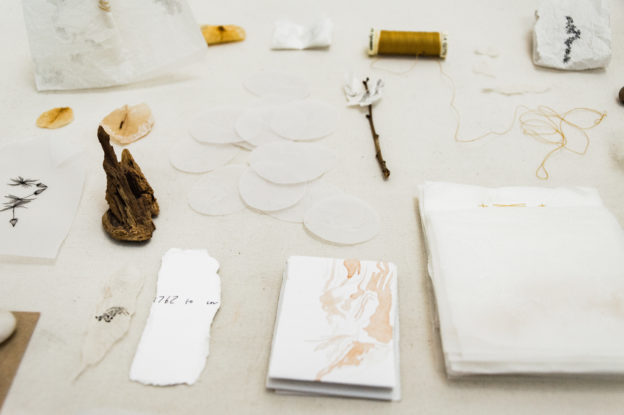 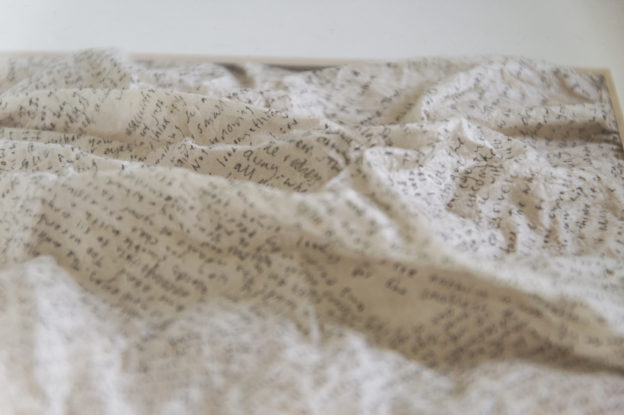 Sophie Erin Cooper: A Split Second of Humanity (Phase One), 2017

Another recent work was Look Closely: Can you see the colours? 2018 – a painting on the Andrew Brownsword Gallery floor and wall at The Edge, Bath. The piece was made up entirely of distorted numbers painted in white and explored how our experiences of the world can be so different. For me the experience of numbers is intrinsically linked with colours, yet to visitors on closer inspection they would find numbers. This link for me is due to colour grapheme synesthesia – a condition where the perception of numerals is automatically associated with the experience of colours. The drawing process of this piece differed greatly from previous works, using pi coupled with synesthesia to create a system to inform the formation of the piece. This transformed the drawing process for me in to something quite restrictive in contrast to my usual intuitive way of working. 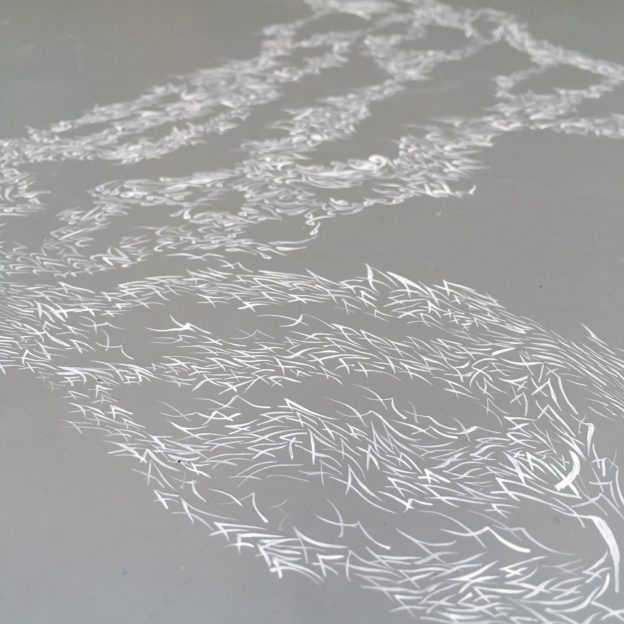 Sophie Erin Cooper: Look Closely: Can you see the colours? 2018

RB: What projects are you currently working on?

SEC: I am working on a site specific piece for Halsway Manor, on a curious painted up window. Instead of focusing on fragility and an ephemeral quality in the works lifespan, this permanent piece presents it in its subject matter. The project explores fragments of memories from the rich human history of the 15th century house, now the National Centre for Folk Arts. 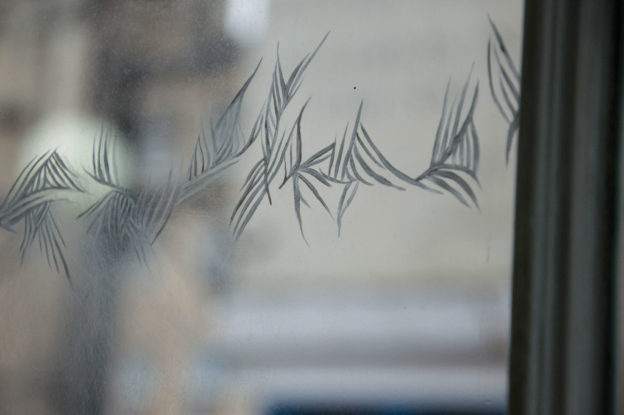 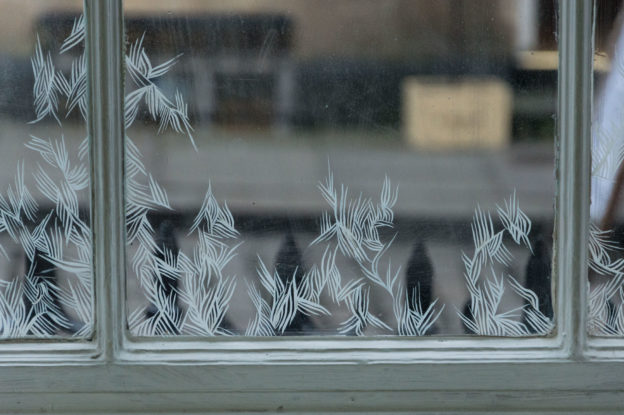 All images copyright and courtesy of Sophie Erin Cooper

Sophie Erin Cooper is a visual artist born in Brecon, Wales who now lives and works in Bath. She holds a Bachelor's degree in Fine Art from Bath Spa University and creates work exploring the intricacies in the natural world and intangible human experiences; such as memories, thought patterns and the passing of time. She has been awarded residencies at The Control Room Bristol, Bath Artists’ Studios and 44AD artspace and was selected as a finalist for the Creative Bath Awards in 2017. Her piece ‘A Split Second of Humanity (Phase Two)’ was selected for the Trinity Buoy Wharf Drawing Prize 2018 and is currently being exhibited on a national UK tour. More details on her work can be found at www.sophieerin.co.uk View all posts with Sophie Erin Cooper →