I discovered David Cooper’s paintings in Falmouth in 2010, a chance encounter of a solo exhibition at the Poly (Royal Cornwall Polytechnic Society). Inside the gallery space in this grand, old building, where Alfred Nobel first demonstrated the explosive properties of nitro-glycerine, I was struck by David’s deployment of ideas, which I experienced as powerful artistic responses to the ecological crises of our age. But I also admired his craft – the intricate detail of each of his paintings and the intense clarity of their colours. His work lodged in my mind’s eye, and the following year I invited him to exhibit in the Web of Life Community Art Project in Frome, Somerset, which culminated with a funeral ceremony for extinct species within the gallery space.

An unusual beauty and luminosity belie the dark subject matter in David’s work. Surreal and spontaneous elements co-exist with paradoxical qualities of depth and the two-dimensional aspect of an illustration. Magritte’s influence is evident, particularly in David’s naturalistic portrayal of his subjects floating against a plain, though highly textured background. This isolates them from any context, provoking a feeling of edgy incongruity.

Born in 1953 in the fishing village of Filey in East Yorkshire and eventually settling on the Cornish coast with his French wife, for some years David was content with watercolours depicting traditional seascapes. But an abrupt departure from this came with his painting ‘An Idea’ in 2003. 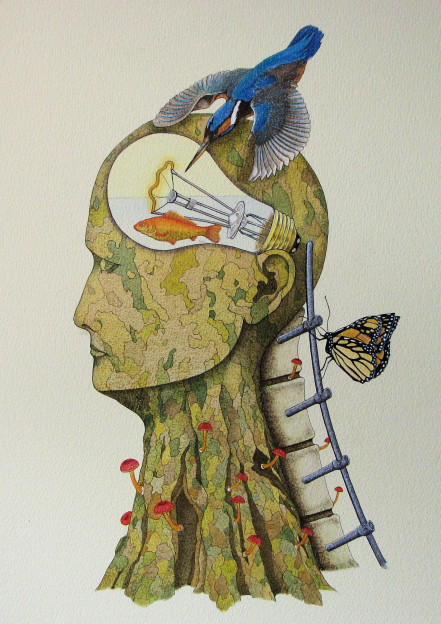 From a conversation with David in his studio in Falmouth:

Helen Moore: The theme of metamorphosis is central to ‘An Idea’, with the human head shaped from a tree stump, and the Butterfly as a symbol of transformation. There’s a complete integration of human and nature, and yet the vertebrae of the spine are exposed and bolted with metal, which I know is an echo of your own body, while the Kingfisher could allude to Parzival’s wounded Fisher King. Would you tell me about the transformation that occurred with this painting?

David Cooper: While painting in watercolour I used a limited palette of only seven colours. Along with a dramatic change in lifestyle due to my back injury, I also changed my approach to painting. I no longer wanted to create seascapes and felt the need to expand my colour range to add more impact to the messages I wanted to convey. At the same time I decided to dispense with backgrounds to further increase the impact. I changed to the medium of acrylic and 850 gsm paper to give the backdrop some interesting textures. I practically always start with an idea for a title then try to work up a meaningful drawing and eventual painting that I hope will convey the message I’m trying to put across. ‘An Idea’ is probably the only painting for which I’d no “idea” what the end result would be! 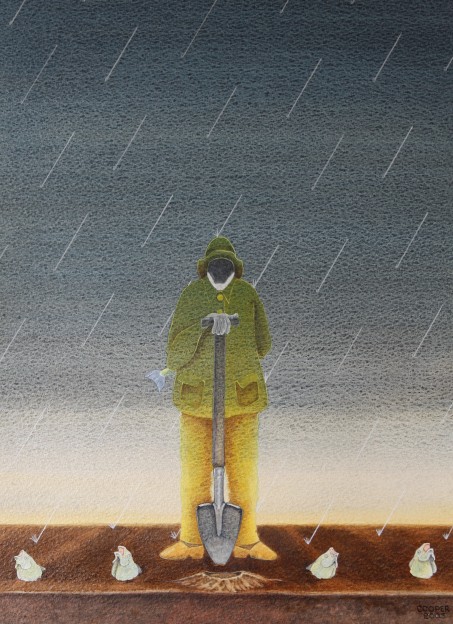 HM: Your painting ‘Fish Farm’ engages the viewer with a humorous literalism in response to the term. Like an ominous Jehovah figure, a charcoal-grey faced famer with a white beard holds a giant spade, while around him the heads of fish protruding from the soil gasp to drink the raindrops. What was the idea behind this painting?

I am a self-taught artist living in Falmouth uk. I began drawing and painting at a very early age due to my love of nature, I have worked in many mediums over the years however recently I have settled on acrylics as my choosen medium. My paintings are inspired by my own thoughts and ideas no subject is taboo but all are depicted in a non offensive manner, often with a sense of humour. View all posts with David Cooper →