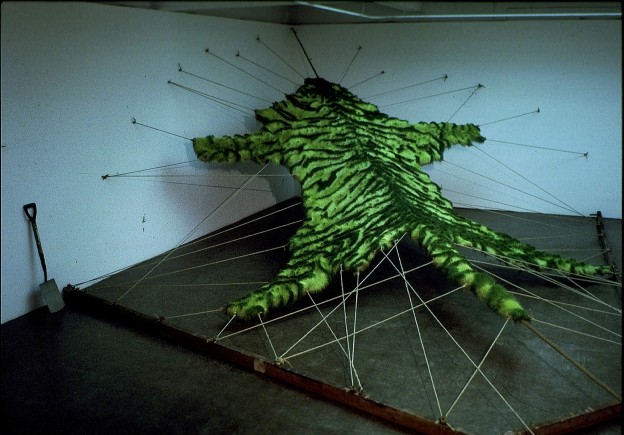 Helen Moore: Your work is expressed in this powerful mix of intersecting disciplines – sculpture, photography and film, architecture, science – and I wonder if this breadth has emerged as part of your process, possibly out of a desire to find the right means for narrating and/or making physical your response to the issues and themes you address (climate change, extinction, natural cycles of growth and decay etc); or if a multidisciplinary approach was there from the start, perhaps arising out of your different skills and interests?

Ackroyd&Harvey: It tracks back to formative influences and decisions, chance meetings and free-ranging instinct. In the late ’70’s Heather studied a degree in Combined Arts, the first Honours Degree in the UK to actively encourage cross-disciplinary work. Concentrating on performance and sculpture, the disciplines of sound, text, design, video and movement all played a key part too and throughout the ’80’s she was involved in the British avant-garde theatre world, working across Britain, Europe and the USA. Dan completed his Masters in Sculpture at the Royal College of Art in 1982, and started showing with Birch and Conran, a London art gallery based in Soho. One of his exhibitions was seen by art directors Ben van Os and Jan Roelfs who were working with filmmaker Peter Greenaway, and subsequently Dan worked on three consecutive films on specialized prop making and set design. He grew Caliban’s Pit for Prospero’s Books and worked on the magical books. In 1988, he also created some sculptural pieces for Derek Jarman’s War Requiem. So, the stage was set early on for us to feel that we could draw on and intersect different disciplines when we started collaborating together in 1990.

HM: By coincidence, we independently responded to the mock Ecocide trial held at the Supreme Court in September 2011 – I, as a poet, with ‘Earth Justice’; you with your film of the proceedings, which was exhibited the following year in Texas.  How was your film received in an American state readily identified with the oil industry, and to what extent do you hold the reality of ecocide at the centre of your practice?

Sculpture, photography, architecture, and biology are some of the disciplines that intersect in Ackroyd & Harvey’s work. They are acclaimed for large-scale architectural interventions and for their work making complex photographs utilizing the pigment chlorophyll; in 2003 they grew the entire vertical interior space of a disused church in South London, the following year contributed to European Space 9th Sculpture Quadrennial in Riga, Latvia and in 2007 realised their largest temporary living public artwork FlyTower on the exterior of London’s National Theatre. In 2011 they were awarded the prestigious Mapping the Park commission for London 2012, a series of individual sculptures entitled History Trees at ten of the major entrances into the Olympic Park. Three of the sculptures will be present for the Games with the remaining seven to be installed for the opening of the Queen Elizabeth II public park. During last year they also exhibited in Terre Vulnerabili at Hangar Bicocca in Milan, continued a Slow Art residency at the Eden Project, were commissioned to make a short film for the What of Earth series, and showed a series of their crystal artworks at the Royal Society summer exhibition. View all posts with Ackroyd&Harvey →