Robert Simmon, Planet Labs Senior Data Visualizer Engineer and former Lead Data Visualizer at NASA says of Richelle Gribble’s work: “Gribble’s art is restless, moving from dioramas painstakingly assembled from found materials, to a sprawling network of miniature painted snapshots, to filaments of spider silk arranged to echo urban streetscapes. Despite the diversity of media, her work maintains a continuity of theme, a sense of place, and a reverence for our home planet.”

The period of time during which human activities have had an environmental impact on the Earth regarded as constituting a distinct geological age. (Merriam Webster)

Anthropocene explores the complex relationship between humanity and the environment. To examine our impact, it is crucial to witness life with and without human influence. This collection encompasses three key phases: nature without humanity; nature with humanity; and human impact on Earth. This exploration shows how humans are not separate from nature, but integrated into it. Thus, our behaviors and actions impact where we come from and effect where we are going. 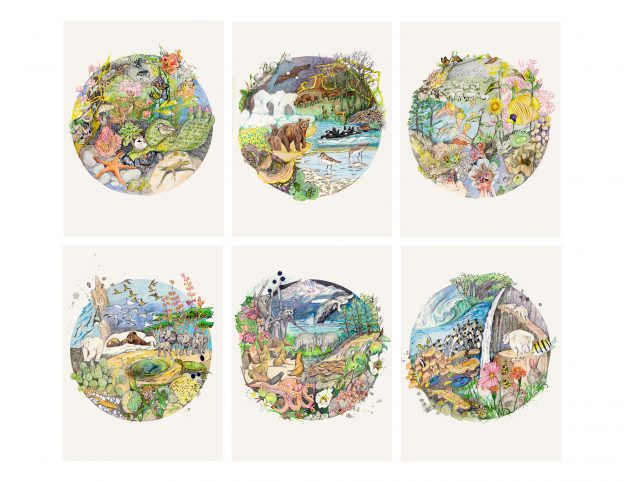 Nature without humanity is examined in works such as “Biosphere,” “Invisible Complexity,” and “Biodiversity” to marvel at exquisite nature living harmoniously as one connected system. It is innocent, void of human impact, and stunning in its appearance. Vibrant in color, the organisms and environments are alive and entangled. Ecology is explored by linking hundreds of species in unified webs and biospheres. These works are optimistic and use connective structures and circular compositions to suggest interconnectivity and unity in nature. 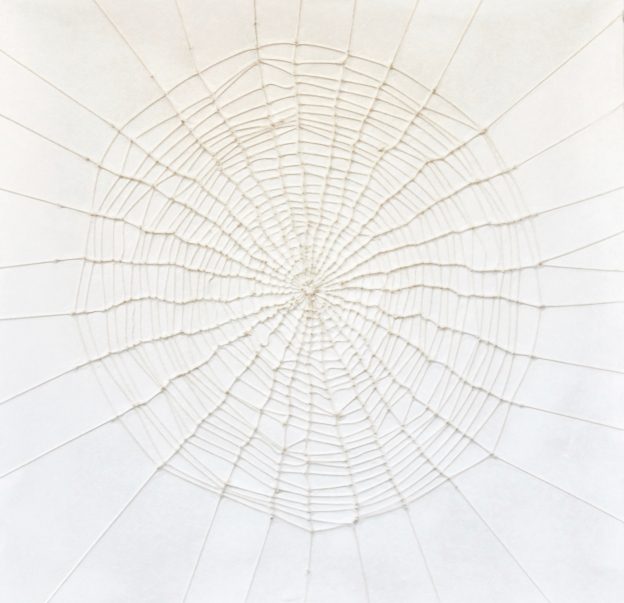 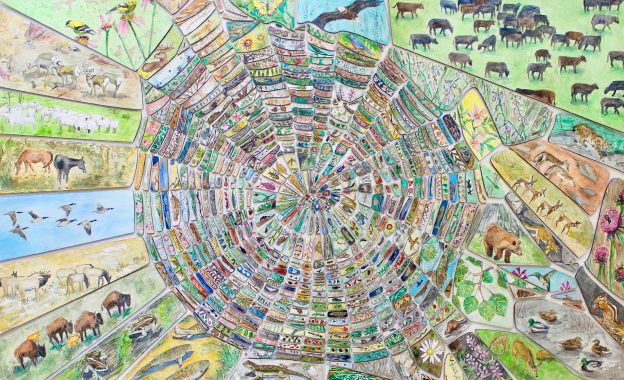 Nature with humanity is then revealed by man-made systems and technology introduced into works. This is evidenced in “Organized Chaos,” “Linked,” “Paths,” and “Earth Core.” They show how humans exist in nature as well as how we mimic and design inspired by nature. The combination between human population, technology, and progress is not separate from the natural world, but born from it. There is a sense of wonder and purpose found when human life is seen as just one of many components of a global ecosystem. Our creations and existence derive directly from our origin. 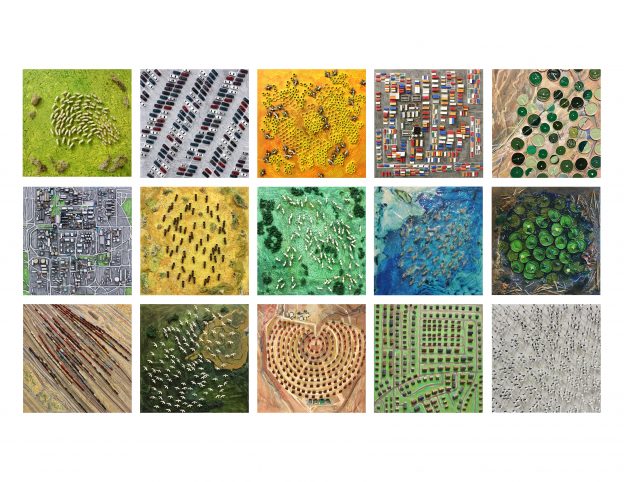 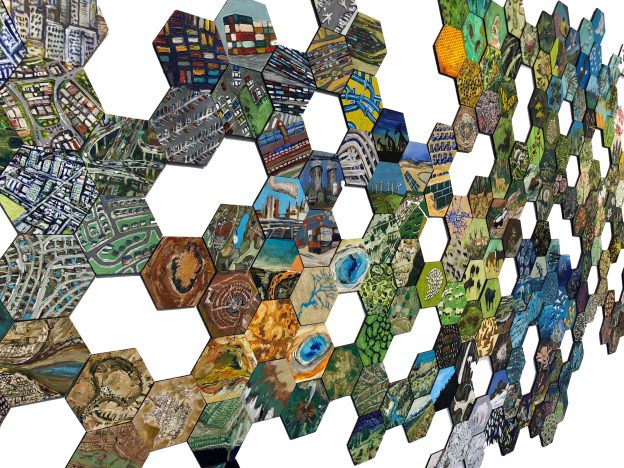 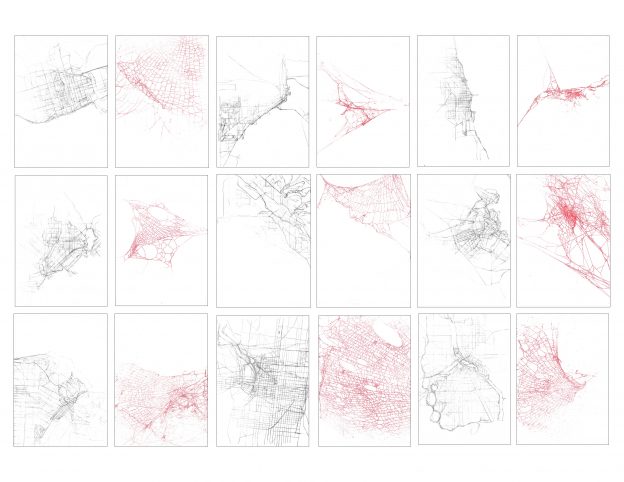 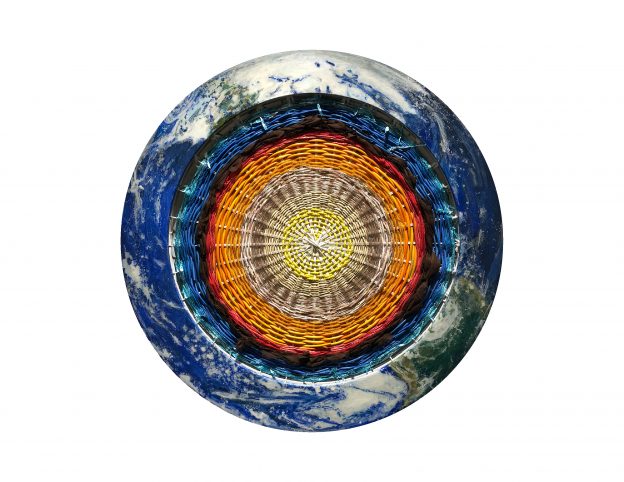 Human impact in nature fully contemplates the Anthropocene geological age in which we currently exist. Traces of humanity find evidence in all facets of life. Icebergs contain traces of oil extracted by man, while we litter the deepest parts of the ocean with our trash. We have no boundary to our reach; we have left our imprints everywhere. We are replacing pristine nature that existed before us with our own devices. “Imprints” illustrates our human tendency to claim territory and leave a trace, marking our existence. While “Eco-Footprints” represent the path we leave behind, even after we are gone. 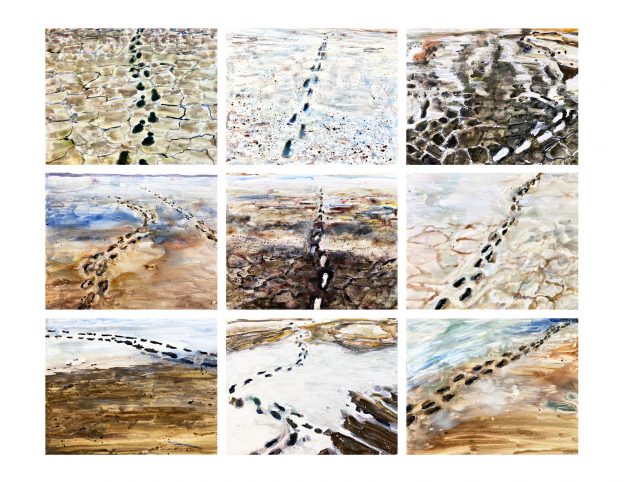 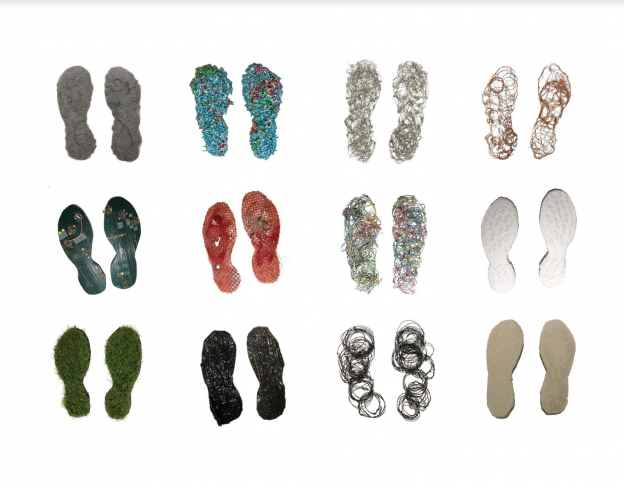 What comes next? Our impact on nature is undeniable. The question remains if the net effect is entirely destructive, or merely undergoing natural changes in human presence. So much of human progress is associated to advances in technology but this increasingly burdens our limited resources. How do we grapple with two colliding systems – nature and human progress – that are both needed for evolution? Much of human ingenuity and technology is inspired by nature and natural processes, thus depleting diverse ecosystems jeopardizes human innovation. However, intentionally slowing progress to protect nature would prohibit human evolution and ask deeper moral questions about the human right to thrive. How can we be involved in regulating society’s progress relative to nature? How do we choose? And, is it even up to us, or has the innate DNA of humanity already chosen?

Art & Science collides to investigate the world we live in. “Organized Chaos” and “Linked” contain source material of satellite imagery collected using Planet Explorer Beta during a 3-month artist residency at Planet Labs, an Earth-imaging satellite company. “Earth Core” is based on collaboration with NASA’s Lead Data Visualizer, Robert Simmon to dissect his famous “Blue Marble” image composed of four months of light data into a woven textile. “Paths” depicts city maps of bike paths and walkways generated on RunKeeper and reconfigured into real spider web formations. “Biodiversity” illustrates more than 850 species observed and documented at a 1-month artist residency at the Brush Creek Foundation for the Arts in Wyoming.

Richelle Gribble creates mixed media paintings and drawings, collages, prints, videos, puzzles and sculptures. Her artwork is inspired by concepts of virality, biology, networks, group dynamics, and social trends that connect us all. She earned a BFA in Studio Arts from the Roski School of Art and Design with dual minors in Social Entrepreneurship and Marketing at the University of Southern California, in 2013. Winner of 2016 Grand Prize Award for solo exhibition at Jonathan Ferrara Gallery with inclusion in Art Market San Francisco, Texas Contemporary, and Miami Project. Works exhibited on LED screen in Times Square; Christie's Salesroom Rockefeller Center; Fisher Museum of Fine Arts; John Wayne Airport; Awagami Factory; and more. Her artwork is etched onto four Dove satellites in the first-ever orbiting art show in outer space facilitated by Planet Labs. Work presented in a TEDxTrousdale talk "What is our Role within a Networked Society?" View all posts with Richelle Gribble →