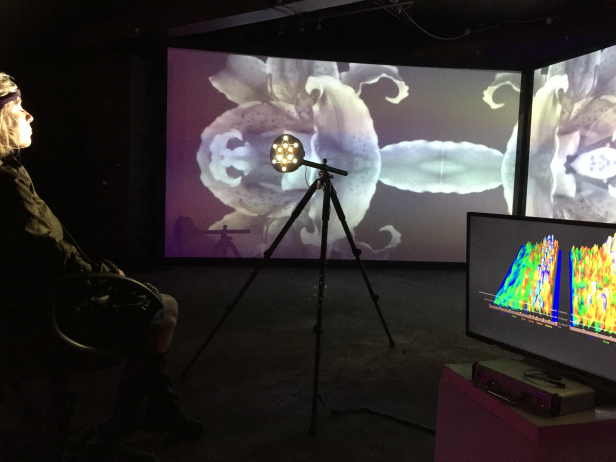 Based in St Leonards on the south coast, she is a British Fine artist fascinated by the relationship of history, new technologies, memory & dreams. “I am concerned in ‘seeing with eyes closed’ and esoteric ways of accessing ‘The Visionary’. When I suddenly developed Viral Meningitis as a teenager I became fascinated with the human brain particularly because I experienced my first altered state of consciousness (ASC). It appeared to me in hospital as a sublime ultra violet illuminated lozenge like an inter-dimensional portal, I did not know at the age of 13 if that was a Heaven or Hell, – in fact it was at that moment that I fainted for the first time. Although it was very short-lived, this phenomena fitted with the American psychologist Charles Tart’s definition of an ASC – “Altered states of consciousness are alternate patterns or configurations of experience, which differ qualitatively from a baseline state.” I was fascinated and had to read his publications (although convent school in Bromley Kent didn’t have a Psychology as a subject), luckily I was studying Art, Biology and Computer Science ( a seemingly unconnected combination for artists, and to the school’s dismay ! ) So I began recording the brainwave (EEG) signal in the 1990s whilst studying for a degree in Interactive Art with the technoetic (and life changing) Professor Roy Ascott.

An ASC appeared desirable to me especially as it could “promote creativity ”.  That was when I found myself more interested in the science than the art initially when I discovered Dr Tart’s variant of discrete states Examples of d-SoCs are ordinary waking state, non-dreaming sleep, dreaming sleep, hypnosis, alcohol intoxication, marijuana intoxication and meditation. A discrete state of consciousness (d-SoC) is a unique, dynamic pattern or configuration of psychological structures, an active system of psychological subsystems which are:

Accessing and reproducing paranormal, hypnagogic & the phenomena of other dSoCs  via endogenous routes became my methodologies. This synchronised with my discovery of visual ‘Flicker’ as a route to altering brainwaves, accessing more excellence & generating even more surreal inspirations. This was first exposed by Neuroscientist Dr Grey Walter and artistically exemplified as the ‘Dreamachine’ in Paris,  by author William Burroughs with artist Brion Gysin. The template for the iconic kinetic spinning light sculpture was designed by mathematician Ian Sommerville who Burroughs dated for many years. I am honoured to be involved in 2020 in CUT-UPS@60 marking this landmark in cultural history (an international Cut-Up Conference in London and Paris in September) for the 60th anniversary of the first publications using the cut-up methods developed by William Burroughs and Brion Gysin at the Beat Hotel in Paris. 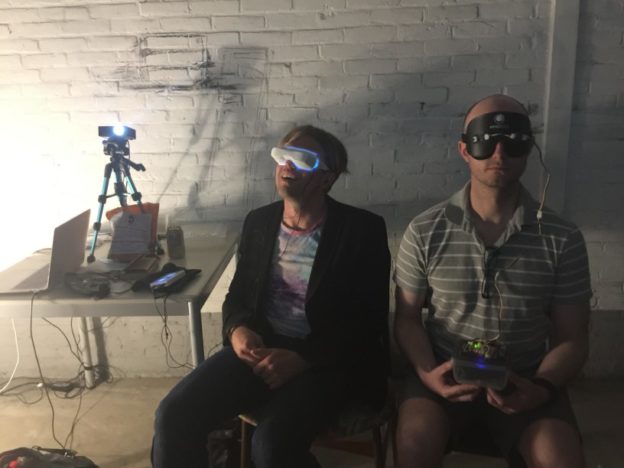 Currently I am working on ‘Ecstasis’ for delivering excellence & ‘flowstate’ in an expansive art installation that involves a heightened intermingling of the senses. This will be first available at ‘Beyond the Brain’ symposium in London November 2-3 2019. There will be more dates in 2020 so sign up for news https://www.ecstasis.space/ and do look at  my previous work at www.lucianahaill.co.uk

Ecstasis art is a syncretic experience I have produced after reflection on the many books and bizarre experts from Parapsychological, NLP, Hypnosis, Lucid Dreaming and meditation whom I have had the pleasure working with. I am concerned about  Brain Ethics & privacy as well as Consciousness Hacking and explorations in Mixed Reality experiences. I enjoy experimental sound improvisation sessions down in Hastings and will be creating a new consumable ‘Telepathine’ as a contemporary artwork next year.

Ecstasis – by training your mind you can operate at your peak.

Sam Wiehl and I collaborated in this amazing festival – The Liverpool Festival of music & Psychedelia​ 2017 in the top floor of a warehouse, combining our skills in Video, VDMX, Brainwave analysis, Light entrainment using PandoraStar white light, and new sounds from Per Diem for this expansive installation for guests taking time out from the dancefloor.

All images copyright and courtesy of Luciana Haill

Revelations by Flicker, Dreamachines and Electroencephalographic signals in art

Luciana Haill is a contemporary Surrealist working with neuro-technologies and her recent practice has focused on artist Brion Gysin’s Dreamachine, Entoptic visuals and the phenomena ‘Flicker’. She has developed this into a series of performances and installations involving the realtime monitoring and sonification of the participants own brainwaves using techniques from hypnosis and meditation, she is considered a pioneering artist in her field. The ‘Phrontesterion’ (EEG & Dreamachine) references the notion of ‘The Visionary’ and was shown internationally in venues including The Royal Academy, The Waag Society in Amsterdam, Kinetica Art fair London and KIBLA in Slovenia. https://lucianahaill.wordpress.com/ View all posts with Luciana Haill →