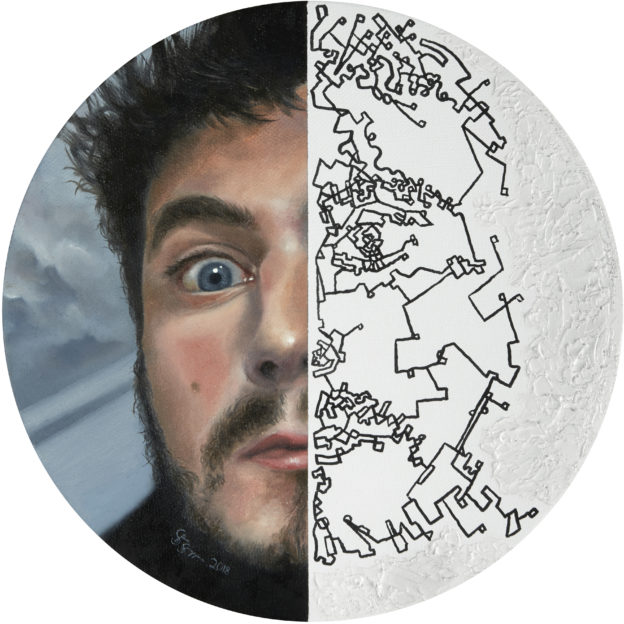 Initially starting from a conference room doodle and some half-baked concepts, much of the past year and a half of my studio time has been dedicated to developing and refining a series of oil and ink paintings titled Superposition. My long-standing passion for science gave me the initial direction for the series and my interest in the study of consciousness aided in refining the series aim and focus.

The main question that the series asks is, Does consciousness create the universe?

Modern science, namely quantum theory, tells us that – perhaps – it does. Contemporary science through empirical testing informs us that there may be an inextricable and dualistic link between the observer and the object being observed.

Investigations into quantum phenomena, such as the famous double-slit experiment, have had scientists scratching their heads for decades. The world of the very small is, to put it lightly, extremely counterintuitive. It is a world that, on many levels, continues to be intellectually disconnected from the macroscopic world in which we humans inhabit. 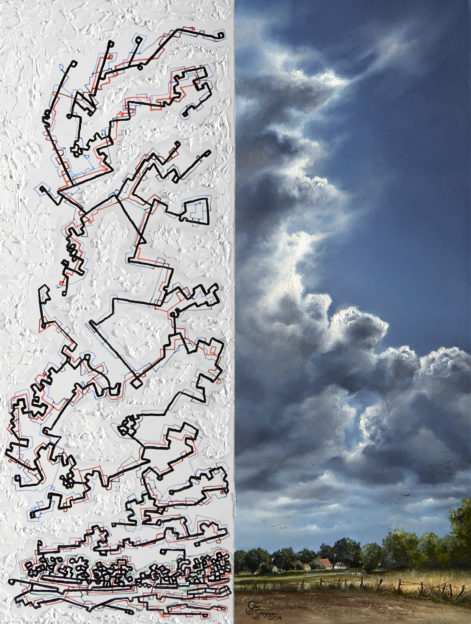 For decades, physicists have made little progress attempting to unify Einstein’s theory of general relativity with quantum mechanics. The inability to reconcile these two theories, which explain the world at the subatomic quantum level (QM), and the universe on its macroscopic scale (GR), is one of the greatest and most challenging issues in contemporary science. A testament to this effort is the sheer abundance of (theoretical) models developed in search of a unified theory – or what has been classically called a “theory of everything.” Further testament to our limited understanding of quantum theory itself is the multitude of interpretive frameworks scientists have devised for thinking about the quantum world. Many Worlds, Consistent Histories, and the Copenhagen Interpretation are just a few ways of interpreting the experimental evidence.

While there are several competing models in quantum mechanics, I am particularly drawn to what physicists refer to as the Copenhagen Interpretation . While this view of the world of the very small is strange and captivating, the implications the theory presents on conscious systems fascinate me and have led me to incorporate these ideas into my work.

Pioneered by Niels Bohr and Werner Heisenberg in the early half of the twentieth century (in Copenhagen, Denmark), the Copenhagen Interpretation interprets data, such as the findings of the famous double slit experiment, as, in part, being dependent on observation. 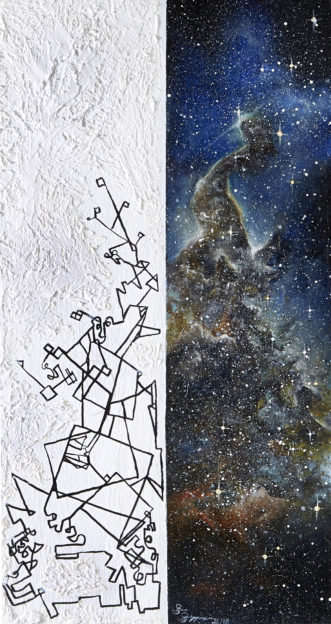 The universe is made of particles, but particles also behave as waves. In fact, a particle always exists in a probabilistic wave state where it inhabits any and all possible locations in space (often referred to as a superposition) prior to its observation. It is the act of interaction (or observation) that will “collapse” the wave function of a particle and reduce its state from inhabiting infinite potential locations, to inhabiting a single position of locality in time and space.

The implication is that through this dualistic process, conscious systems influence, and, in a sense, create what we perceive as “objective” reality. Without the act of conscious interaction and subsequent wave-function collapse, what we consider objective reality may in fact be a vast, infinite sea of potentiality with nothing definite ever happening or existing. In short, the universe may only be around because we are here to experience it.

The superposition oil and ink painting series explores the implications of this idea by splitting the canvas into two halves. On one side of the panel there is the world as we perceive it, which is rendered using oil paint. The delivery is familiar, defined and full of color and emotion. On the other, I employ spontaneous line work in black and white, illustrating the unintuitive, non-locality of the quantum world. 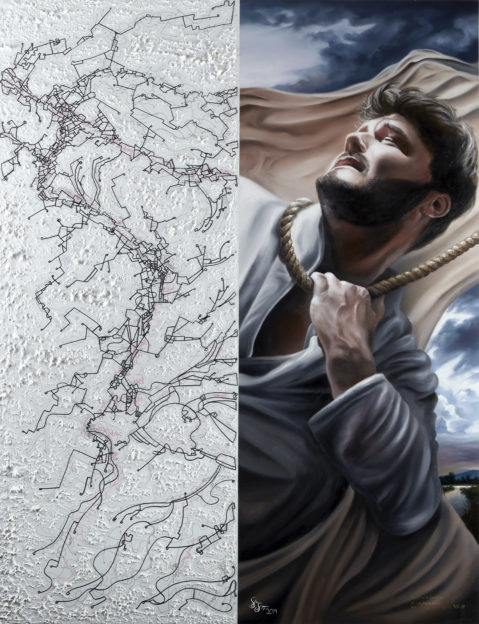 My aim was to have two visually contrasting approaches for how each of the painting halves were represented. The physical execution of representing a single subject using both abstract linework and objective realism creates a strong dichotomy for the series. The contrast of the two approaches invites the viewer into a conversation between the two vastly different ideas of how nature works and is experienced.

The particular subjects chosen for this split-panel execution add an additional dimension to the work. Each piece depicts significant people, places and events in my life. From the Belgian landscape to narratives about loss, each installment to the series is a marriage of my interest in science with personal story and narrative. 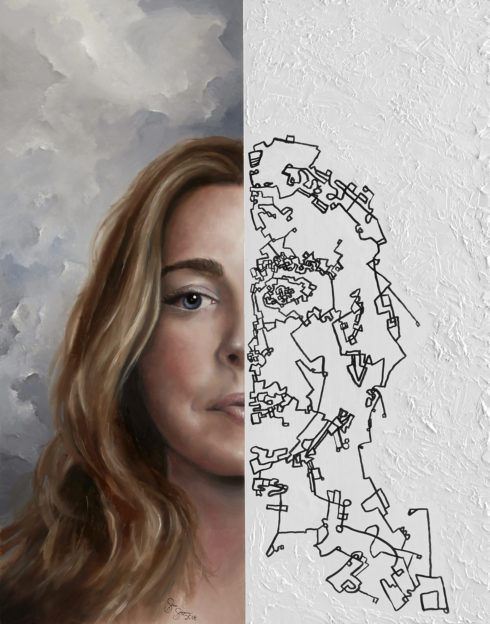 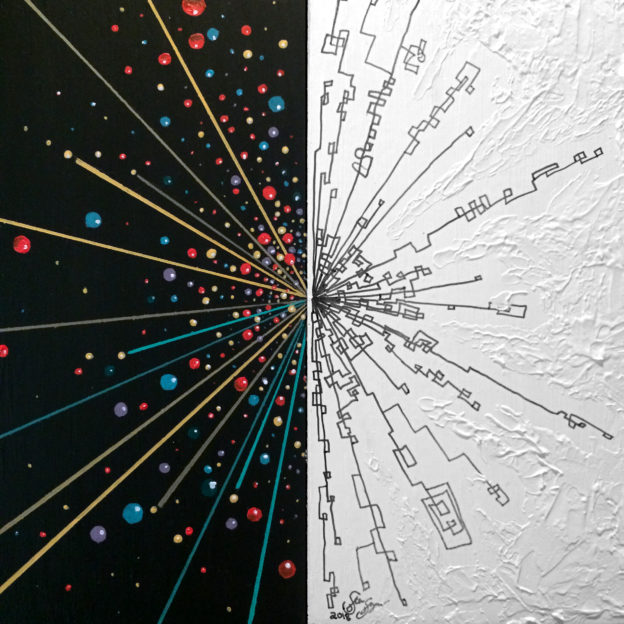 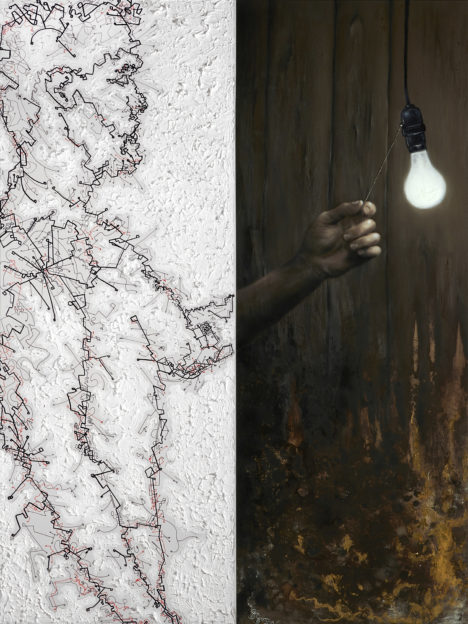 All images copyright and courtesy of Steve Sangapore

Steve Sangapore is a contemporary oil painter based in Boston, MA. Using vastly different stylistic approaches with various series’, his work can be described as an amalgamation of realism, surrealism and abstraction with thematic focuses on the human condition. His unique take on composition, subjects, and structural execution has led his paintings to be exhibited nationally and published in art magazines and journals, including Art Business News, The Boston Globe, Creative Quarterly, Artscope, and E-Squared Magazine. View all posts with Steve Sangapore →