Wavefront is a systems-based response to the research into piebaldism by Dr Kit Yates, Mathematical Biologist, at the University of Bath. I was awarded a bursary by The Edge to collaborate with scientists at the university and was initially intrigued by Kit’s work on locust swarms: how they form and possible ways to disperse them. I related it to the rise of populism in politics: the feeling of safety in a small, close-knit cell, all marching in the same direction, blanking out the noise of opposing opinion.

But when I met with Kit, I discovered his current area of research had moved on and as I wanted my artwork to be a genuine collaboration and, possibly, in some small way useful to the researchers, I changed direction and we spoke at length about his work on embryonic cell migration (see more about the science below). I also discussed the research and my ideas for a response with Dr Tim Rogers and PhD student Enrico Gavagnin. Enrico has built many computer simulations to map cell migration and I questioned what effect altering each parameter has on output. Together we developed the most suitable parameters for a manual simulation. The rules agreed were a 16 x 40 domain, 9:1 proliferation: movement with 4 stages. Early on, I decided it was important to document the process, which forms the accompanying animation.

Each printed “pixel” represents a pigment cell spreading and reproducing. It is the first time I have created a system-based artwork and it was challenging working in this way, with creative decisions removed. I had to abide by the die and random number generator. It was very time-consuming, but as it became very rhythmic and repetitive, I started to enjoy the process. There were several points at which I wanted to stop because the wave front looked aesthetically pleasing, but I persisted and stopped only when there were 100 cells generated. I find the animation almost hypnotic to watch and it is an integral part of the response. I’m open to the possibility of creating systems-based work in future and creating more printed animations. But, for me, it is the difference in the tonal qualities of the black ink in the printed “pixel” cells that excites me. You can get lost looking closely at the blacks. They were all printed at the same time, in the same way using the same ink, but the tonal variation is vast and reveals it to be handmade. My current practice explores the dichotomies of analogue/digital and handmade/computer-generated. For my next body of work, I will be analysing these variations in the “pixels” to form a response for Beyond 72dpi: the post-digital printmaker for the SGCI conference in North Texas, 2019.

Rules for a systems-based response

Firstly, a cell is nominated by the random number generator (RNG), then another RNG dictates at a ratio of 9:1 whether the cell will proliferate (age) or move. Finally, the tetrahedral die is rolled when the nominated cell reaches maturity to decide whether a daughter cell can be produced, or when the cell is elected to move. The die selects a cell in front, to either side or behind, and only if the cell is free can the cell reproduce or move accordingly. 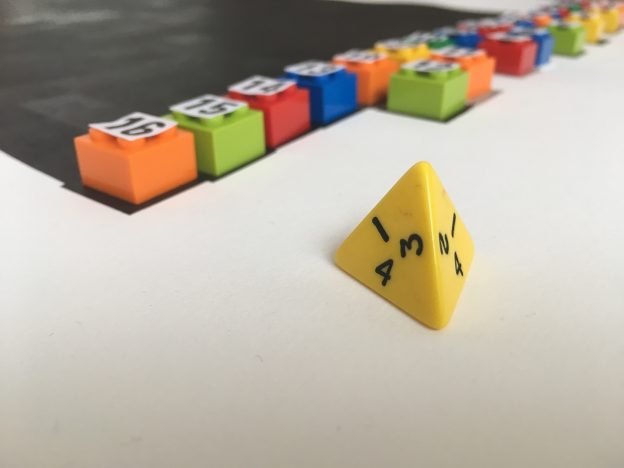 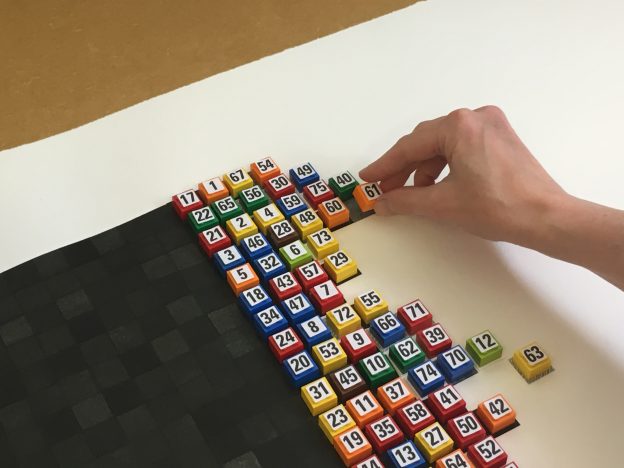 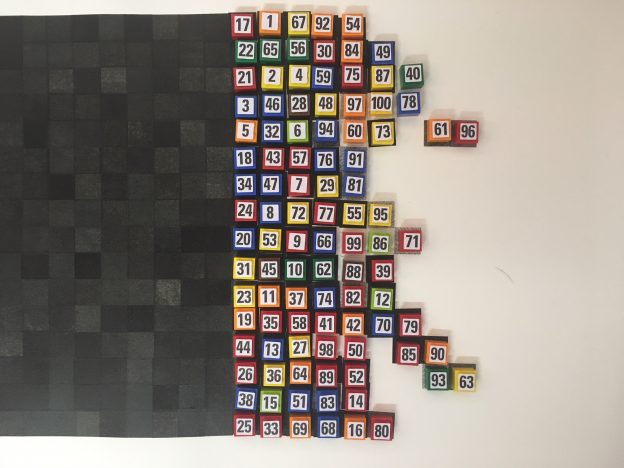 The science and its application

The mathematical biologists have built computer models to map the migration of mammalian pigment cells. If there is a defect in the pigment cell behaviour the cells fail to reach their target destination causing white patches on the stomachs of the affected animals (piebaldism). This genetic mutation is responsible for the distinctive tuxedo markings on famous (albeit fictional) cats like Sylvester in Looney Tunes or Jess in Postman Pat. The models showed, counter to intuition, that the mutation causes cells to migrate faster, but to reproduce more slowly. This finding is a significant step towards understanding a range of related developmental defects including some cancers and heart defects.

Leonie Bradley is an artist working in a range of media including film, photography and print. Trained as a wood engraver from an early age, she often initiates a body of work with an engraving as she enjoys highlighting contemporary issues in this very traditional medium. Leonie has an MA in Multi-Disciplinary Printmaking from UWE, Bristol, is an elected Member of the Society of Wood Engravers and is Editor of the international journal Printmaking Today. She has undertaken residencies at the Department of Mathematical Sciences, University of Bath; the School of Physiology, Pharmacology and Neuroscience, University of Bristol; and the Electron Microscope Suite, Faculty of Health and Applied Sciences, UWE, Bristol. Her work is held in public collections at the V&A Museum, London; Ashmolean Museum, Oxford; Manchester Metropolitan University, Manchester; University of Bath; and, Central Academy of Fine Arts (CAFA), Beijing, China. Leonie has won many prizes for her work and is the current awardee of the Peter Reddick Bursary for Innovation in Relief Print at Spike Print Studio, Bristol (2018/9). View all posts with Leonie Bradley →