That science in general and physics in specific have lost their way has been established by a long list of writers such as William James1,Bertrand Russell2, Alfred Whitehead3, and physicists like Erwin Schrödinger4, Werner Heisenberg5, Penrose6, David Bohm7, Menas Kaffatos8, Henry Stapp9, etc., etc. Even scientist I have known personally such as Charles Towns and Richard Hamming lamented about what John Hertnett10 has described as experimentally unfounded explanations for the big bang, dark matter, dark energy, and the patch work of principles and singularities called miracles in any other discipline. These ad hoc explanations have led popular writers such as Deepak Chopra11 and John Horgan, former staff writer for Scientific America12, to ask, “What’s Wrong with Physics?”

The answer is not a mystery. It lurks in plain sight and has already been published in Scientific America13:

“The doctrine that the world is made up of objects whose existence is independent of human consciousness turns out to be in conflict with quantum mechanics and with facts established by experiment.”

Even founders of quantum theory such as Werner Heisenberg had already recognized that quantum physics describes the system that knows the world rather than the the world itself14. It is no secret that living conscious beings. such as you and I, have been systematically excluded from physics. It is no secret that scientists have failed to prove that we are solely the product of material accidents.

Enough is enough. We know what is wrong with science. We also know the great benefits science and objective thinking has brought to our world. Our population explosion is a sign of success not failure. And we are not helpless petri dish bacteria growing exponentially until the resources run out. We must start talking about how to correct the objective world view because it is failing to solve our problems. Conservation can buy us time, but in order to escape the Malthusian fate we must invent a new paradigm. Science is not wrong, only self limiting. By expanding those limits we can achieve another evolutionary breakthrough and escape what today are believed to be the undeniable truths of our incarceration. This is the Grand Challenge for Science.

In order to progress, we must question the validity of the fundamental assumptions of science. Such questioning is being pursued by many physicists15 and a correction called “Conscious Action Theory” (CAT) has recently been offered16. This work proposes a small but practical next step in our thinking that will open possibilities now excluded from consideration by the mainstream. This step is based on Heisenberg’s contention that quantum theory is the physics of human beings who know the world. It leads immediately to an epistemological physics that emphasizes what we do to see rather than emphasizing the perceptive objects resulting from our seeing. Objects and the forces that move them are inferences.17 Inferences are created by us as explanations of stimulation to our sensors. The changing explanations of our 1st– person experience have evolved in the west from primitive myths to Christian theology and finally natural science. The central assumption of natural science is that we see objects because an objective reality exists out there, in front of our noses, whether we are looking at it or not. Eliminating this assumption is the first step. Do not automatically think solipsism. Instead if we expand the scientific method to include the 1st-person experiences of a standard observer we can demonstrate the error in natural science’s central assumption with the apparatus any reader is endowed with. Consider the following Figure 1. 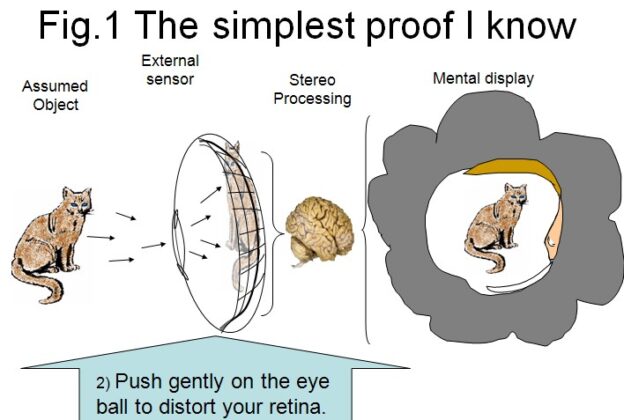 1) First, cover one eye and look out into the world. Then pick out some real thing out there that you are absolutely sure is a real object.

2) Now take a finger and gently push on the side of your open eye. Don’t poke your eye but just touch your eyelid where you can feel your bone socket. It takes a little practice but soon…

This little experiment proves that:

Some people will insist that the object is still there even if they can move the image around. The point, however, is that what you actually see and where you actually see it is created and movable by you without ever touching the “real thing” and this created mental display is what we normally live in, not objective reality. Whether our projection of tangible objects onto the sensation display is a true description of reality is a legitimate scientific question. Quantum theorists for example believe the reality is a probability disturbance and the object is created through the measurement process in your retina and brain. Whatever explanations ones belief system tells one to project into the sensations one experiences,  the truth is that the central assumption of natural science is in fact an assumption and it is high time we examine it for its further usefulness.

Instead of objects Conscious Action Theory proposes that events are the building blocks of reality and action is the fundamental material of change. Philosophers have already defined change as what happens when nothing is converted to something. Classic physicists have also defined action as the measure of the change that happens between material states. It is a small step to identify energy as the rate of change flowing through the “Now” plane of our 1st– person perspective space, and momentum as the rate of action flowing past the observer in a 3rd– person perspective. These two mind and body perspectives have always been components of our personal experience and should have been incorporated into physics from the beginning. Unfortunately scientists in the early 1900s had a mind-set that eschewed any reference to the whims of a god-like 1st– person. What developed in the 20th Century was a complex positivist work-around that gave us non-intuitive interpretations of the practical engineering level formulas of the (shut up and calculate) quantum theory we are stuck with today.

CAT expands quantum thinking to handle macroscopic phenomena such as ourselves. Following Bertrand Russel2, CAT recognizes that the building block of quantum theory has always been a self-contained disturbance of our own perceptive space. The minimum disturbance is visualized graphically as an action loop and mathematically as the smallest amount of action “h” happening in the form of “e2πi”. Extended disturbances satisfying Schrödinger’s wave equation then become Fourier Series. By multiplying and adding these elements into large mathematical structures these series describe happenings in space and time. But what is space and time?

CAT incorporates subjective phenomena by realizing space is what it feels like to be material. Material has an internal subjective side, which we experience directly, and external objective side, which we invent and visualize through symbols. Our own space is grown by capturing action from other events and unless we expand physics to manage this evolutionary struggle we will be blindsided by subjective reality, which physics has ignored for the last Century.

The reintroduction of the 1st– person experience is equivalent to reasserting a metaphysical framework that had been thrown out as un-testable and therefore non-scientific. However the realization that we do exist and that our feelings are real has taken hold in the 21st Century. Once the 1st– person experience is acknowledged, testability by direct personal experience becomes available and it is easy to prove that there are mentally-generated explanatory sensations called theories, which always accompany sensory sensations called qualia. These together form our everyday objective reality.   A quick example from Conscious Action Theory is available19. Imagine lying on a warm beach at night and looking up at the stars. A trained scientist will automatically locate these stars several, perhaps thousands, of light years away. However the sensation of light experienced is actually caused by a here and now interactions in his retina. These physical retinal interactions are processed, not into real worlds out there, but into ones models located in ones memory. From these models an explanatory sensation is generated which feels like the space and stars the scientist sees. This mental process can be observed externally when an astronomer takes the dots on a photographic plate, applies his theory, and announces a phenomena, which we all agree happened in outer space. Again, I am not proposing there is no real entity out there, but only that if we replace the theoretical concept of objects with self-regenerating explanatory-measurement events, as physicist Archibald Wheeler19 proposed, we will develop a more useful theory of reality than either classic or quantum physics provides today.

The unfortunate and terrorizing challenge of adopting event-oriented thinking is that to understand it one must allow a mental state that acknowledges ones ultimate ignorance. One does not and cannot know the actual reality beyond ones external sensory interactions. As Don Hoffman20 points out, “Evolution does not reward knowing the truth.” It rewards profitably handling and occasionally improving what one believes to be the truth. The walls of the room, in which you may be reading, are what you experience directly, the world beyond that sensation is a theoretical inference that seems to work until it does not. One cannot get out of oneself to take a look at the reality out there. All we can do is build better symbolic models and building one that handles the consciousness of beings is the next challenge for science.

2a) Russell B., “The observer, when he seems to himself to be observing a stone, is really, if physics is to be believed, observing the effects of the stone upon himself.” URL https://www.brainyquote.com/quotes/bertrand_russell_107154

17) Eddington A., (1938) The Philosophy of physical Science, The Macmillan Company, QC6 E21, p16 The Fish Story analogy p21 – “physical science continues to be wholly an inference from observation”

Dr. Wolfgang Baer received his Ph.D. in Physics from the University of California in Berkeley. His thesis included a controversial attempt to include a physical analysis of his own role as conscious observer while operating spectroscopic experiments on the recently available element Promethium. His interest in developing UAV vision interpretation systems lead to the analysis of cognitive vision and consciousness studies. He is a regular contributor to conferences dealing with physics and consciousness including Science and Non-duality (SAND), Toward a Science of Consciousness (TSC), Foundations of Mind (FoM), among others. He supports cognitive systems development and macroscopic quantum effects leading toward theories integrating subjective and objective experiences. He recently published with Routledge Press titled ‘Conscious Action Theory’ that is intended as an advanced text to teach the physics of consciousness and summarize his observer based physics research. View all posts with Wolfgang Baer →