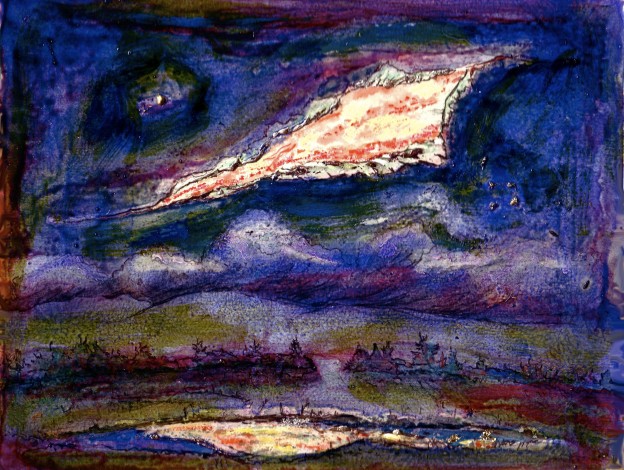 John Moat: The Tear in the Sky

More than forty years since Fairfax and I made the move that would lead to the setting up of The Arvon Foundation. From the start it was the idea that knew where it was headed. In fact it often seemed that the idea had simply requisitioned us – we were primed as operatives, but would act reliably only if kept well away from the controls. In truth, I suppose at the outset we had had a bit of an idea: that it would be good to create a space where individuals, and in particular young committed writers, could be given a sanctuary away from, as we saw it, the creative deprivation imposed by the system of standard education – and there offered what the pair of us had been gifted, the guidance of experienced writers. But then the idea itself took over and we were left to act like a couple of sorcerer’s apprentices, watching in amazement as the spell constantly came up with the goods. Apparently also it conferred on us a magic agency – we needed only to say the word to a person to find the idea had infected them. And the result of that was/has been/is a national organisation with headquarters in London and four regional centres which over the years have employed getting on for 2,000 writers to work with many thousands of individuals eager to explore their own gift for writing.

I’ve often wondered to what extent the thrust behind the adventure came from Fairfax and myself and how much was the determination of the Imagination itself? Most of us use the word Imagination without worrying that we haven’t a clue to what it means. What it means to us, or what it means to anyone. Most often it’s used to relate to an individual’s creativity – to his or her originality (whatever that means!) and inventiveness. To some it is a gift, like the ability to dowse; to some it is more of an aptitude, like being clever; to some it is nothing less than the conveyance of the highest truth. But thinking of it in relation to Arvon I’ve wondered whether it isn’t a formative force, universally inclusive, and which the Player King in Hamlet has a brave shot at describing when he says,  “Our thoughts are ours, their ends none of our own.” And that has led me to wonder further how failure to grasp how this formative, determining mystery, properly reverenced, is the guide and unfolding force in the lives and ventures of every individual, and their society, and above all their education, amounts to a serious ‘missing of the mark’. One that leaves individual and society, to use a current phrase, “unfit for purpose”.

[This article was previously published in ‘The Gist – A Celebration of the Imagination’ (edited by Lindsay Clarke, with a foreword by Andrew Motion) available at www.thewritefactor.co.uk/]