Katharine Dowson is fascinated by the properties of the eye, which allow adjustment to changes in the direction of light. She has combined this with her interest in the mind’s ability to adapt and mould itself in the creative process. For her, glass is a membrane; it has a life of its own; it moulds itself into objects thus evoking memory’s processes of impression and recall, replication and change. She constructs forms that rely both on transparency and translucency, using materials that allow light to pass through, playing with the opposing qualities of clarity and distortion, with which both cast objects and those seen through lenses may be distinguished. Through the manipulation of glass, lenses and light, she infuses notions of inner and outer worlds; of what is opaque, or hidden from view in contrast to that which is clear or illuminated.

Dowson’s interest in the human brain started in 2002 whilst collaborating with Dr. Piers Corneliesson, Newcastle University and Dr. Paul Hanson, Oxford University in their research into Dyslexia.   She had an fMRI scan of her Brain, specifically into the part of the brain that process’s words and the anomalies there may be within the dyslexic brain function. As part of this research, she produced a body of work around the psychology of IQ testing for the Exhibition ‘Head On’ at the Science Museum, London 2002.   Images of Dowson’s Brain subsequently initiated various works. 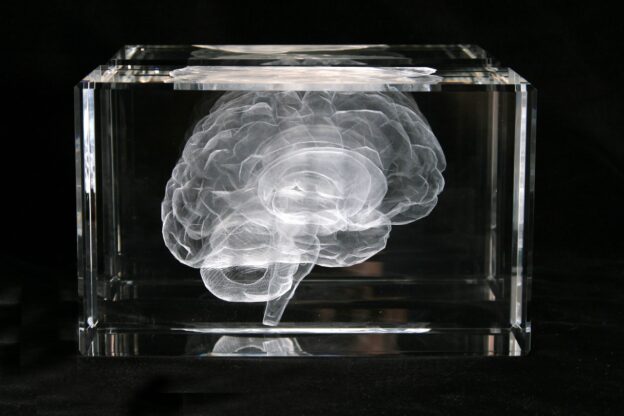 My Soul 2005 is a life size laser-etched image of her brain from the MRI scan in two pieces of crystal.  Having seen dissections and slicing of brains, Dowson made her own brain into a virtual specimen.  My Soul references the self and asks the viewer to reflect upon the exact location of the soul and the origin of our emotions. 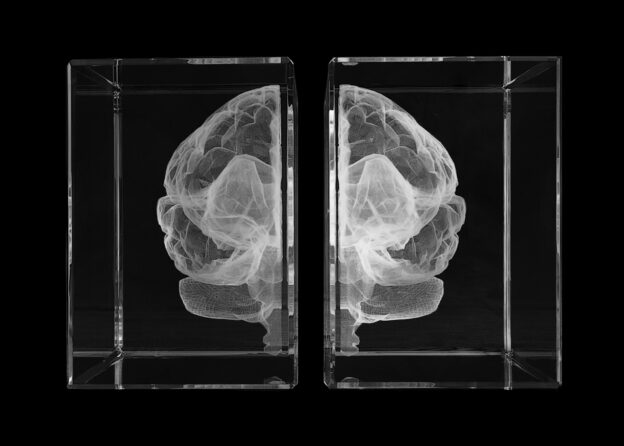 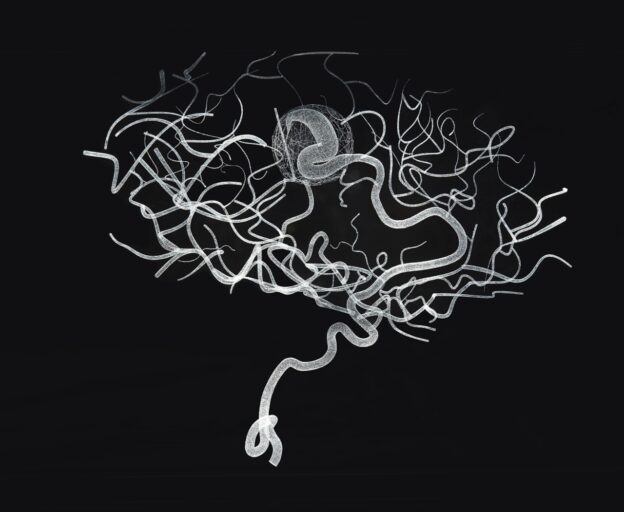 Memory of a Brain Malformation 2006, is a life size laser etching, in glass, of Dowson’s cousin’s Altera Venus Malformation, a brain tumour, which was successfully lasered out. The image of the delicate vein scaffold that feeds the brain tissues are reminiscent of a tree and supporting a nest within the branches, that is apart of the organism but alien at the same time, much like a parasitic ecosystem. The life size lased glass veins and tumour are delicate and ephemeral like a memory and the echo of the real thing before being lasered away. 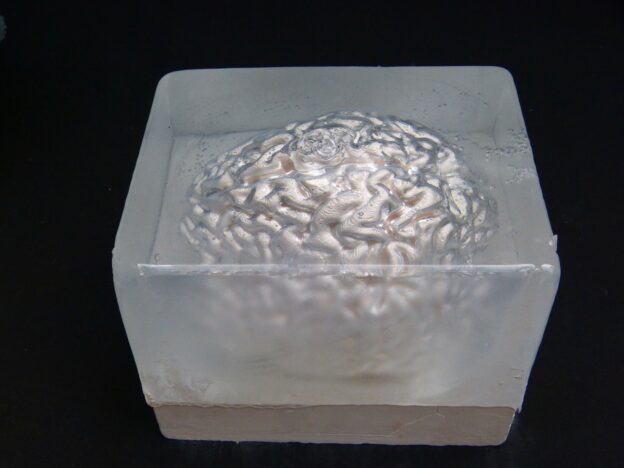 Dowson also volunteered as a control subject at Imperial College London, working with David Dexter, Professor of Neuropharmacology and Scientific Director of Parkinson’s UK Brain Bank. She had an updated MRI scan of her brain 10 years after the first Oxford scan and in 2013 she created exact 3D-printed models of her brain, which she then cast in glass.  Engulfed 2015 is her life size brain, core cast in glass, like a floating specimen, trapped in fluid. 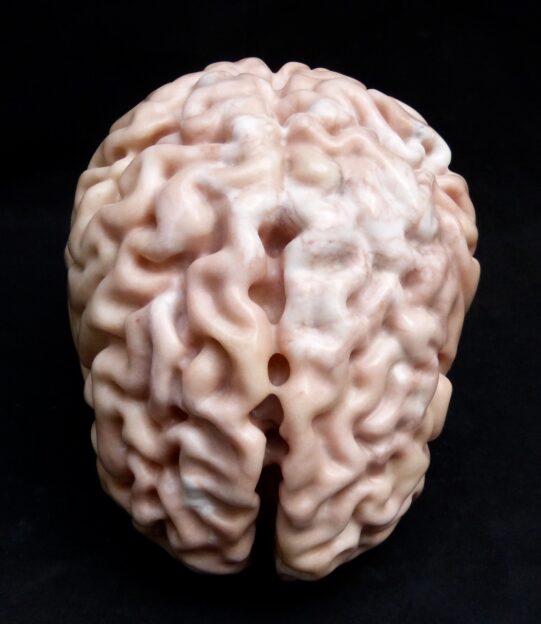 Meditation 2016 is Dowson’s brain carved in pink Portuguese marble from her 2013 MRI scan.  It is 2.5 times life size. The tactile quality of the marble is an essential part of the work, giving an intimate feeling when caressing a sculpture of the organ we think holds the mystery of the human psyche. 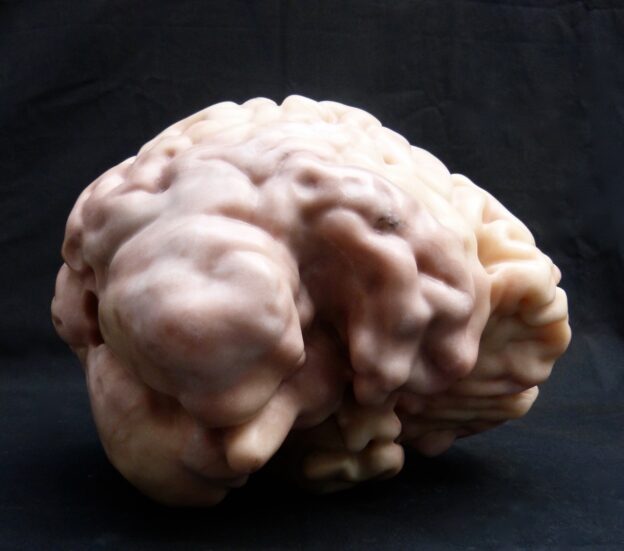 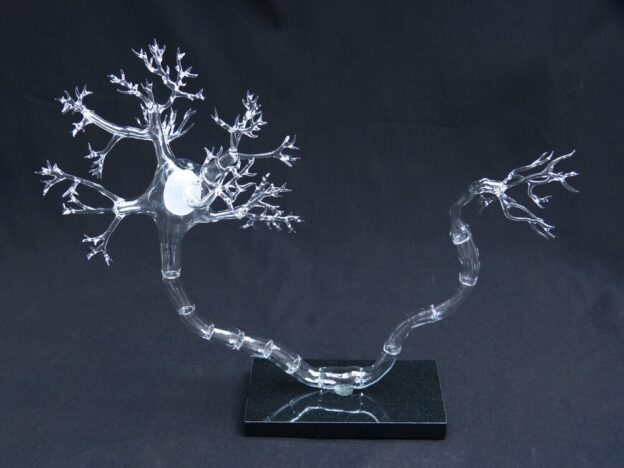 Dowson made Synapse 2013 while she was The Institute Of International Research In Glass Research Fellow, Sunderland University UK.

All images copyright and courtesy of Katharine Dowson

Katharine Dowson studied sculpture at Camberwell College of Art before doing her MA at the Royal College of Art, where she won the Princess of Wales Scholarship. She has now gained international recognition, her work exhibited in London, the United States, Brazil and Asia. She has been collected by the Bill and Melinda Gates Foundation, The Wellcome Trust, The Arts Council Collection, Cultura Englesa Brazil, The Institute of Neuroscience Newcastle University amongst others and also by numerous private collectors. Charles Saatchi brought her work and she is included Shark Infested Waters, Saatchi Collection of British Art in the 90's. Dowson has exhibited in ground breaking inter-disciplinary exhibitions that investigate the intersections between science, art and medicine. These include Spectacular Bodies, A History of Anatomical Art from Leonardo to Now at the Haywood Gallery London, Head On: Art with the Brain in Mind at the Science Museum London and Brains: Mind as Matter at The Wellcome Collection. Her most recent work has involved close interaction with the international scientific community to showcase the latest scientific innovation and discoveries through an artistic medium. In 2014 Katharine was one of 30 artists world-wide to be commissioned by the Bill and Melinda Gates Foundation for the project ‘Art of Saving a Life’, to celebrate the World Health Authorities 40 years of mass immunisation. In 2015 she was the first artist to exhibit in Oxford University’s Chemistry Department with her solo show Sculpting Science. View all posts with Katharine Dowson →