H. Bottlefield is a fictional character who lives in the far future, he uses his talents to capture the fascinating futuristic world around him. In Universitas Bottlefield takes you on a journey to eight futuristic solarpunk cities. Each city has its own distinctive character, culture and history and has developed unique and highly specialised ways of taking on the specific challenges it faces. He explains what he has observed in the near future by means of illustrations and design sketches, text and photographs and links to other interesting sources. His extensive research on these cities ranges from agriculture to architecture and includes topics like robotics, aviation, nature conservation, spirituality and art and trade.

The author, Dustin Jacobus, main goal is to inspire and to share ideas that can open discussions about how our future could evolve in a positive way for mankind.

Here are a few examples from Universitas – 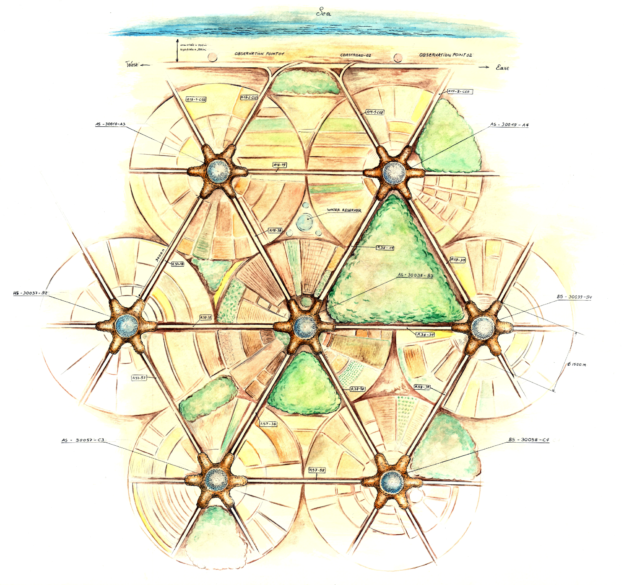 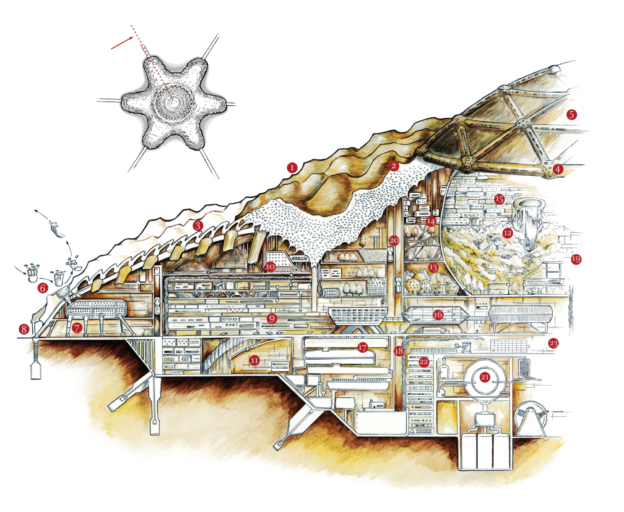 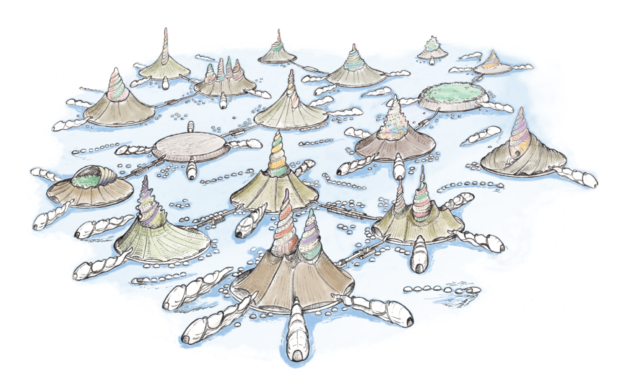 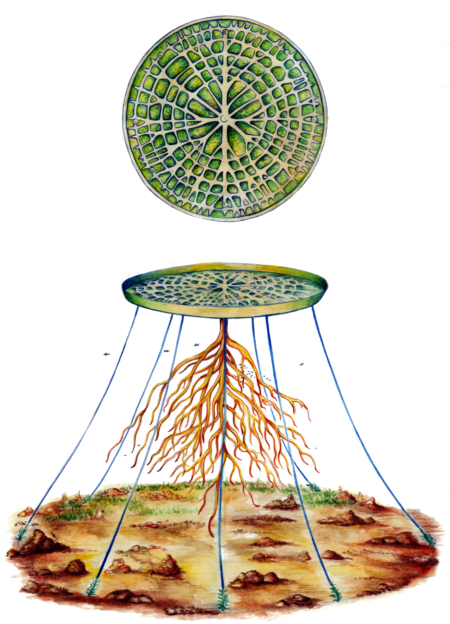 An artificial hybrid plant
Victoria Amazonica : The structure of the Victoria Amazonica leaf gives the plant its extraordinary properties to carry heavy weights. The leaves are sturdy thanks to the veins on the underside. This plant inspired botanical engineers to design a large organic platform that can carry the buildings of the Purple Fleet. 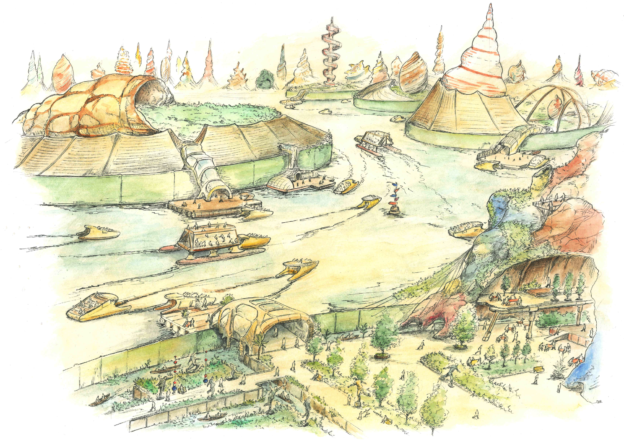 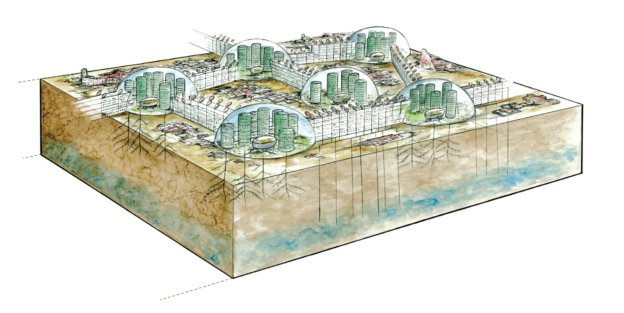 Organic city built on the ruins of Phoenix (Arizona)
Phoenix dome is the capital of the knowledge community. The city counts several city districts, built inside geodesic domes. It’s the hometown of renowned thinkers, inventors, philosophers, authors and other influential speakers who teach here. 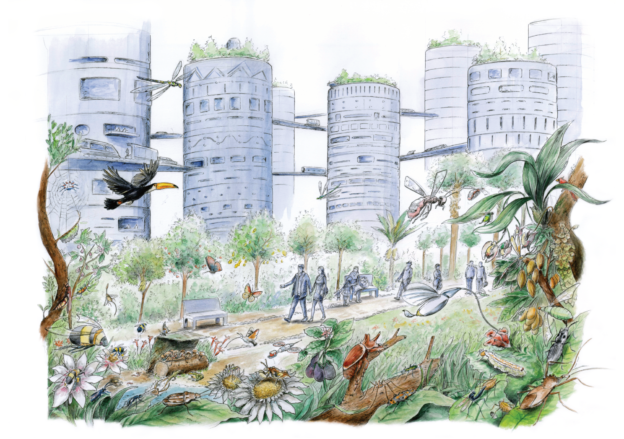 Ecosystem science
The micro-environment of the geodesic domes is used to help restore insect populations and to reintroduce lost species. Insects, spiders and bugs, studied here play a crucial role in controlling pest populations. The goal is to learn the role of each insect within an ecosystem. The knowledge is also used to design artificial robots with insect DNA. 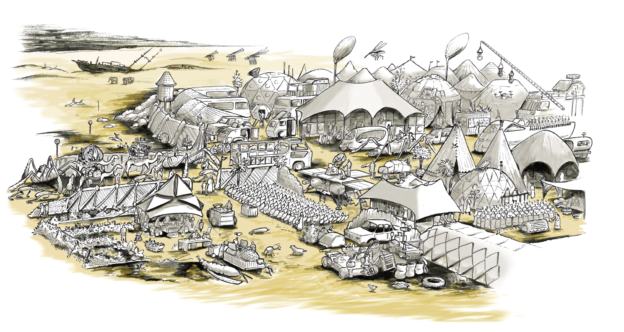 The nomad community
Desert nomad camp
Nomads main occupation is trade. They have an important role as recyclers and upcyclers and help with Rewilding operations. There are numerous different nomad settlements and tribes. Together they form the largest community on Earth.
Pictured above is a typical desert nomad camp. A desolated camp settlement where passing caravans can take a rest. Nomads that stop here do not stay very long. 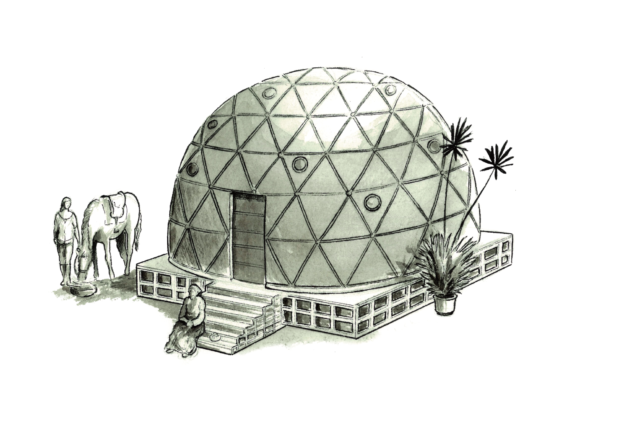 Small dome shelters
Specialized nomad groups wander through the most desolate outskirts of Earth in search for minerals and raw materials. Beside tents the geodesic dome is a favourite shelter for mining nomads. They build their villages in areas they want to excavate. 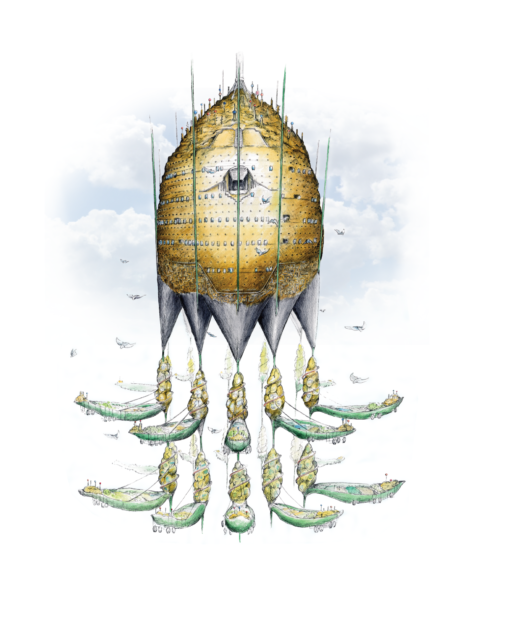 Large mudnest inspired houses
These cities are constructed at the borders of Earths remaining rainforests. Sky cities or platform cities are built on platforms made from organic material. The platforms rest on organic pillars with an extreme strength and flexibility. Their residents protect Earth’s forests. They control the airspace traffic and they monitor the weather.
The residents live in buildings built on top of the platform and in the mud houses hanging between the long organic pillars. The architects found inspiration by studying mud nests of birds. 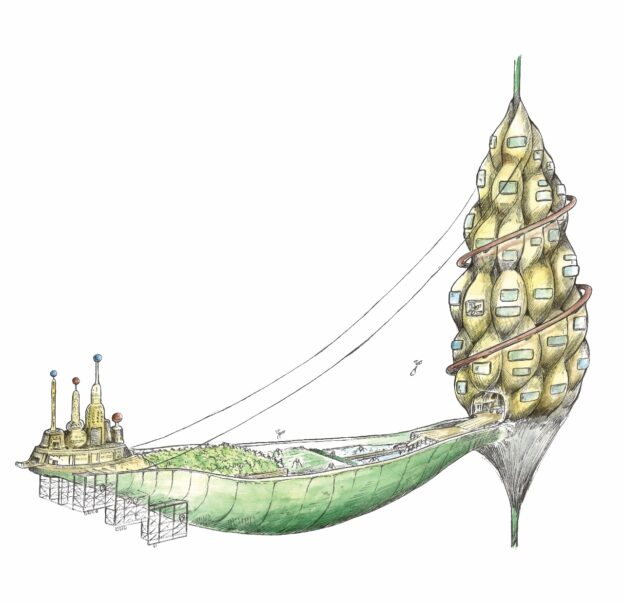 Bromeliad agriculture
Food supply system
The bowl like Bromeliad is used to cultivate crops. There is a mud layer at the bottom of the large leaf. It forms the foundation for the terrace system, used to cultivate the different crops. Incas and other highland civilizations used this terrace agricultural system.
The name Bromeliad refers to the tropical plant that grows high in the canopy of the tropical forest. The plant captures water. This tiny water pool functions as a small ecosystem. The water forms the source of the agricultural system. 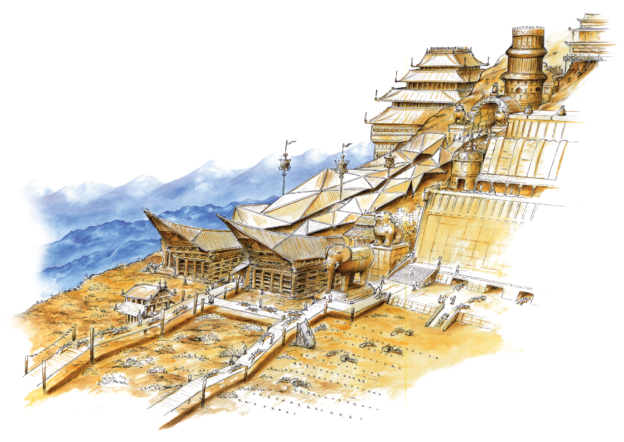 The Spiritual Community
Himalayan spiritual cities
The inhabitants live a more spiritual and mystical life and are therefore called the spiritual community. Many Asian architectural artifacts are reused in the architecture, though the cities are technologically advanced. 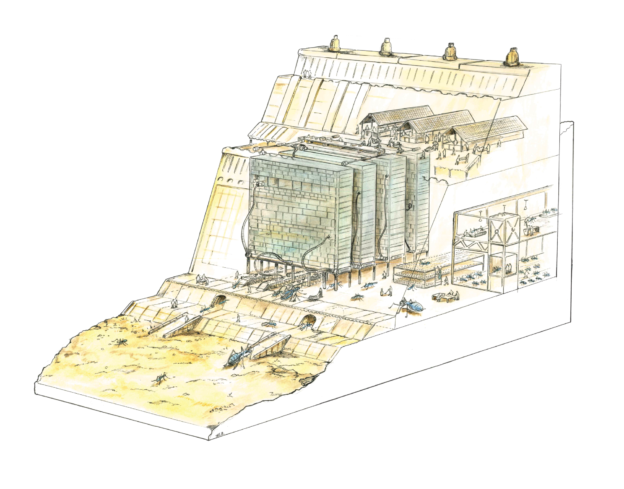 The Warehouse
An ant driven logistic centre
The spiritual community counts hundreds of small to medium sized towns stretching the Himalayas. There is not much infrastructure, no roads, airports or VacTube connections. The residents remain in their homes for the most of their life.
They get help from formicid bots. Ant robots used to move goods from one city to another. Imported products are delivered at the warehouses. Products get stocked till they end up in the marketplace on the upper floor. 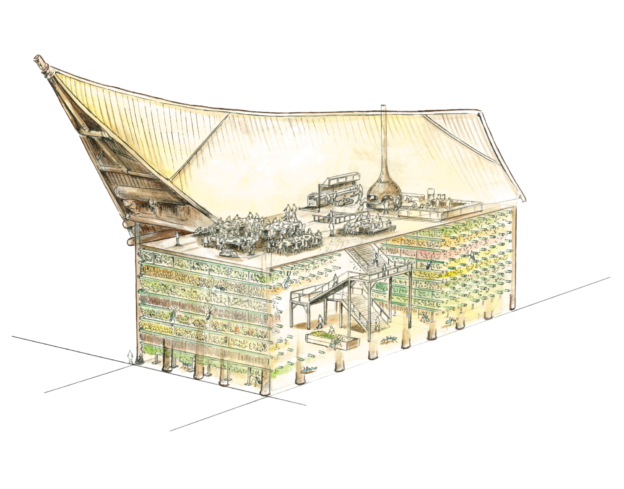 Tongkonan breeding house
The agricultural system is a mixture between the cultivation of crops in the wild and an industrial greenhouse system. They use several breeding houses. The most common designs are based on the Tongkonan architecture. Inside a system of pipes distributes a viscous seed fluid, used to cultivate nutritious food. The upper level is used as a community kitchen. Residents of the city eat here together. 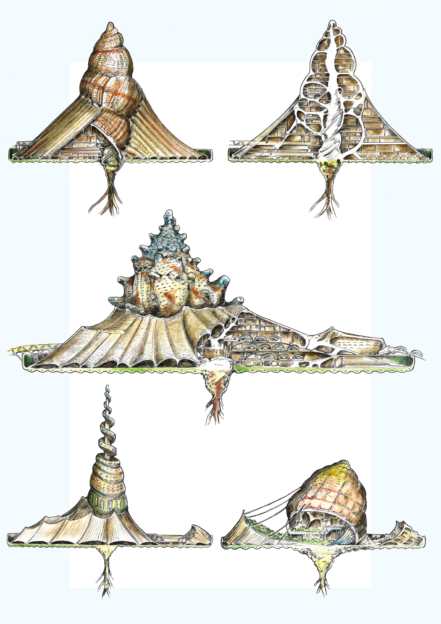 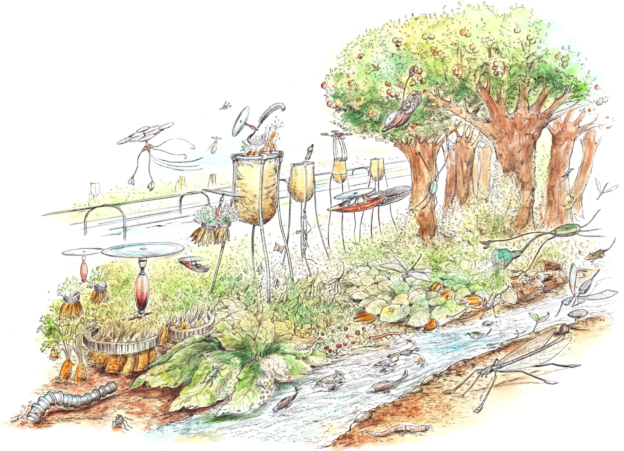 All images copyright and courtesy of Dustin Jacobus

Dustin Jacobus is a Belgian illustrator, interested in biomimicry, sustainable design and futurism. In the art-research project Universitas, he combines these themes and creates a futuristic world in which a fictional researcher H. Bottlefield, explores eight solarpunk cities. Jacobus graduated as an industrial designer and started his career as a technical illustrator and 3D CAD designer. He combines his artwork with a job as an educational expert in drinking water. View all posts with Dustin Jacobus →