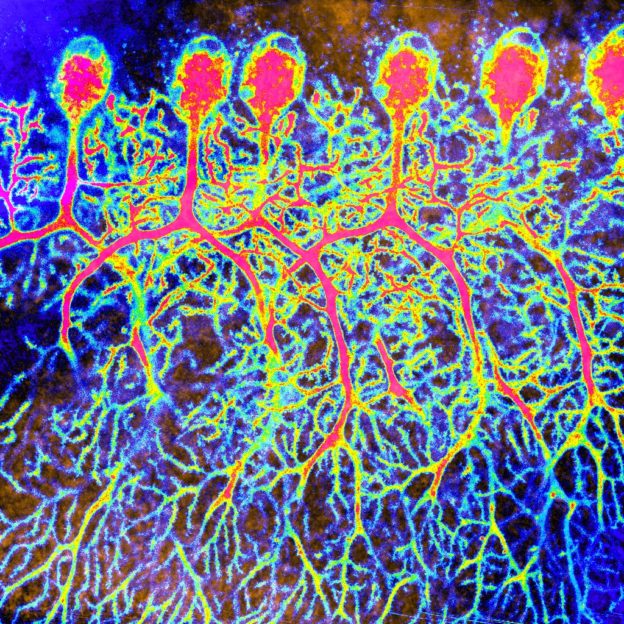 Dana Simmons: I was brought up in an artsy family, but always had a natural inclination toward the sciences. From an early age, I started training in ballet and taking cello lessons. I visited art museums and galleries, attended concerts, and engaged my creativity whenever possible. In school though, I was always fascinated by biology – the field of study that seeks to understand how life works. In particular, it occurred to me in a ballet class, that all of the elegant balances, jumps, and turns I had learned were planned, adjusted, and retained by one specific part of the body – the brain. I attended Boston University where I studied biology, Spanish, and dance, and worked in a laboratory where I was introduced to research and the opportunity to design experiments that had the potential to uncover new knowledge. After college, I joined the Ph.D. program in neurobiology at the University of Chicago, where I decided to study the cerebellum, a part of the brain responsible for learning and fine tuning new movements, because it plays a large role in ballet. I joined a laboratory and researched how learning changes the cells and synapses in the cerebellum. In particular, I studied a type of neuron called a Purkinje cell, which looks strikingly similar to a highly-branched tree. As I looked through the microscope during my research experiments, and became fascinated with the structure of these neurons, I explored how I could use the microscope to feature the beauty of these neurons, and my science-art took shape. 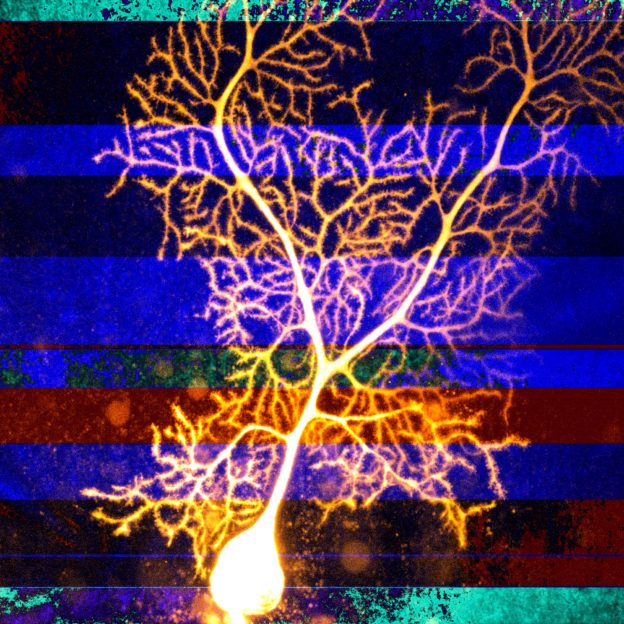 RB: Have there been any particular influences to your neurobiology practice?

DS: In creating my art, I often think about Andy Warhol’s pop-art and Santiago Ramón y Cajal’s sketches of neurons. Warhol’s art used an image of an everyday object to draw attention to it, presented it in multiples, and translated it into a variety of color schemes. His use of color inspired me to explore the graphics settings on my microscope and present the same neuron in many different hues. Different color schemes highlight different portions of each neuron. For me, neurons became an everyday object, and I aim to show off the natural beauty inside the brain by tweaking colors and textures.

Santiago Ramón y Cajal was an early science-artist who looked through a simple microscope and sketched what he saw – groups of neurons with spaces between them. His technique of looking through the microscope and converting what he saw into realistic art inspires me to look through my own microscope and take note of the aesthetic qualities of brain samples – not just the data I can collect from them. Learning about the shapes of neurons teaches us about how they connect and communicate in networks.

RB: Can you say something about your research into Autism Spectrum Disorder and its connection to the cerebellum?

DS: Autism is most commonly described as a spectrum disorder characterized by deficits in social interaction, difficulties with communication, behavioral inflexibility, and the appearance of repetitive behaviors. However, what’s less commonly known, is that the majority of people with autism have some abnormalities in their movements. A number of studies have concluded that these motor problems are associated with alterations in how the cerebellum works. The goal of my dissertation research was to figure out what types of changes in neuronal communication take place in the cerebellum in autism, and how they might lead to changes in motor behavior. One of the advantages of working with the cerebellum is that the circuitry is well understood compared to other parts of the brain. As a result, research has been relatively successful in connecting neuronal activity with behavior. One of the central goals of neuroscience is to connect molecular events with behavior, and cerebellar studies help us make those links. 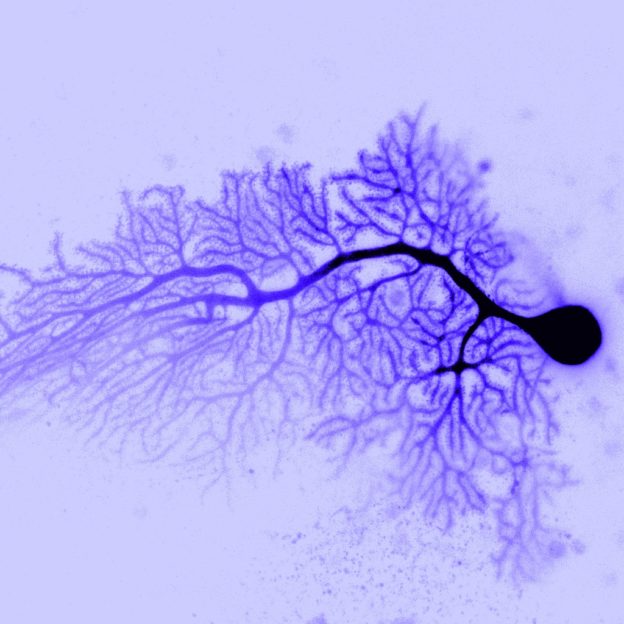 RB: In the late 19th and early 20th centuries, Ramón y Cajal adapted and created techniques in microscopy and histology to visualize the fine structure of cells in the nervous system. How have today’s neuroimaging techniques progressed this visualization and how has this progress informed your own art practice?

DS: Ramón y Cajal used a simple light microscope to look at thin slices of brains, so thin that light could pass through them. In order to make specific cells in the slices stand out, he used a technique called Golgi Staining. Golgi Staining is a process that involves submerging tissue in a series of different solutions for several days, and then slicing the tissue into thin sheets for viewing. The solutions stain a small subset of cells in the tissue black, which makes them easy to see under a microscope.

We still use Golgi Staining for some experiments today – usually if we’re trying to learn about the shape of a cell and how a disease or experimental manipulation might change that shape. However, visualization techniques have progressed tremendously since Ramón y Cajal’s time. Most modern microscopes are connected to cameras, computers, amplifiers, oscilloscopes, specialized software, and a whole host of other technology. Today, use fluorescent dyes to localize substructures within cells, we have powerful microscopes equipped with lasers that can zoom in and record images or videos of individual dendritic spines, and we can simultaneously induce neuronal signals that activate specific spines. This means that we now have the ability to see much smaller structures in action, in addition to large structures that are static. This technique, confocal calcium imaging, is what I use to turn neurons into art.

In the past decade, there has been a large push toward in vivo 2-photon imaging, because it allows the researcher to view the activity of a whole field of neurons. This type of technique is useful for learning how ensembles of neurons might work together during different behaviors. 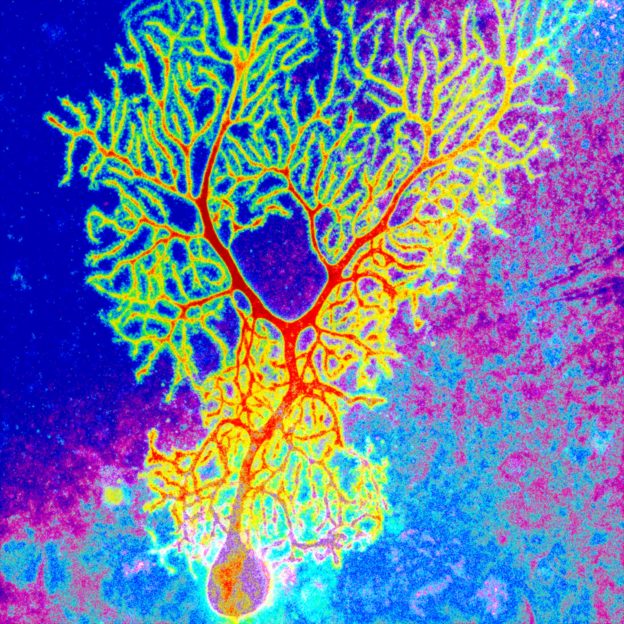 RB: Your artworks are obviously informed by your neuroscience research. In creating your artwork, what takes priority, the art object or the scientific data?

All images copyright and courtesy of Dana Simmons

Dana Simmons is a neuroscientist, science-artist, and medical writer in Chicago. She holds a Ph.D. in neurobiology from the University of Chicago, where she researched the cerebellum and autism. While at the university, Dana transformed Purkinje neurons into art by testing the limits of confocal microscopy and adding an artistic touch. She is endlessly fascinated by the beauty in the brain and the patterns that are ever-present throughout microscopic and macroscopic nature. Dana is an internationally recognized, award-winning science-artist, and received the Passion in Science: Arts & Creativity award from the New England Biolabs in 2016. She has exhibited her artwork in Chicago, New York, Vancouver, and the Netherlands; has been featured in the Cell Picture Show Calendar; and was part of the inaugural group of Bridge Residents for the SciArt Center. Dana volunteers as Co-Editor-in-Chief of Science Unsealed, the Illinois Science Council's blog, which aims to inspire curiosity and start conversations about science. In her free time, Dana enjoys baking pumpkin gingersnap cookies and watching her cat chase a laser pointer dot. https://www.dana-simmons.com View all posts with Dana Simmons →