Richard Bright: Can we begin with you saying something about your background?

Charlene Spretnak:  I was born in Pittsburgh and raised in Columbus, Ohio, in a Roman Catholic family. In college I took several courses in art history but later became a professor of philosophy and religion at a graduate institute in San Francisco, California Institute of Integral Studies. I became intrigued in the 1990s by the insistence of most art historians and curators that modern art is entirely secular, having been launched in 1870s as a radical break from religion and tradition. This narrative seemed much too simplistic because I knew that several of the most prominent artists of the modern era were, in fact, influenced in their art by spiritual interests, usually begun during childhood. So I began to look into this.

RB: Your latest book, The Spiritual Dynamic in Modern Art: Art History Reconsidered, 1800 to the Present, aims to demonstrate that spirituality in the history of modern art is not inconsequential, but is important and generative. It is what you called in your introduction to the book, ‘The great underground river that flows through modern art’. First of all, how is ‘spirituality’ defined in the book?

CS:  My sense of the spiritual dimension of life extends beyond a focus on the self to a sense of our embeddedness in the larger context: the exquisitely dynamic interrelatedness of existence, the vibratory flux of the subtle realms of the material world, and the ultimate creativity of the universe. The cosmos is infused with an unfolding dynamic of becoming and also a unitive dimension of being. Spirituality is the awareness of and engagement with that unity and those dynamics. In the book I use the following categories of spirituality in the modern era that influenced (Western) modern art: Traditional (the Abrahamic religions, mostly Christianity); Esoteric (hugely important to the avant-garde artists between 1885-1916); Allusive (Buddhism, etc.); and Spirituality of Immanence (nature-honoring).

RB: For many years there was the assumption that the narrative of modern art could only be told (and taught) in terms laid out by MoMA in the mid-1930s, and in particularly by Alfred H. Barr’s exhibition catalogue, Cubism and Abstract Art. Why do you think this assumption was so strong and long-lasting? (On a personal note, it was still very much prevalent when I was studying fine art and art history in the 70’s, while also writing my dissertation on the ‘spiritual aspect of early 20th century art’ – and having many ‘spirited’ discussions with tutors).

CS: Before the Great War the esoteric dimension of abstract art and much of cubism was widely acknowledged in Europe and frequently written about in periodicals and books. There was also a social dimension to the esoteric art: many of the prominent avant-garde artists, including all six of the pioneers of abstraction, deeply believed that the new art might bring about a new way of seeing and hence a new age for society. After the war, however, a mood of pessimism and depression settled over Europe because the supposedly grand march of Enlightenment progress had led, in the end, to the senseless slaughter of millions of young men in the trenches. Among many of the younger artists there was an intense reaction against the esoteric “cosmic wallpaper” of the prewar period, which had been powerless to prevent the carnage, let alone usher in a new age. So the postwar reaction was to embrace the clarity of geometric design and “rational” social planning. By the time Barr made a trip in 1927 to study modernist art at the (late version of the) Bauhaus, the heyday of prewar estoteric art and its many explications were thoroughly eclipsed.

Also, in working out his own interpretive take on abstract and cubist art, Barr embraced as his guide Heinrich Wölfflin’s formalist principles of “scientific art criticism,” Kunstwissenschaft. I’ve always found it problematic that Wissenschaft can be translated either as “science” or “the systematic and rigorous study of.” Many scholarly studies that are actually the latter are then regarded as having a powerfully scientific pedigree. The science of education! The science of art! In any event, Barr selected the formalist interpretation over other prewar explications as his touchstone.

So by the time Barr explained the new art to the American public in 1936 via his exhibition at MoMA, the many esoteric writings and declarations by prominent artists in prewar Paris and Munich were unknown to most Americans and were passé in most European art circles. The one American art historian who was both well versed in the primary source materials of the prewar art and who immediately refuted Barr’s thesis – that abstract art was born because the artists had grown tired of the exhausted forms of realistic depiction – was Meyer Schapiro. In his famous article the following year, “The Nature of Abstract Art,” he (correctly) asserted that the pioneering abstractionists had “metaphysical standpoints“: “Not the processes of imitating nature were exhausted, but the valuation of nature itself had changed. The philosophy of art was also a philosophy of life.” So true – but, as we know, Schapiro did not carry the day. Clement Greenberg did, especially after World War II.

The matter of why MoMA’s formalist, insistently secular framing of abstract and cubist art was “so strong and long-lasting,” as you say, is complex. In the Introduction in The Spiritual Dynamic in Modern Art, I suggest six reasons – too much to go into here, but it’s a fascinating example of how a particular view gets cemented into being the major narrative within a field for 70 years, requiring massive amounts of historical evidence to be ignored and denied. Certainly the powerful position of MoMA in the postwar Anglo-American art world was, and is, a factor.

RB: Do you think this is still the accepted narrative in the professional art world? 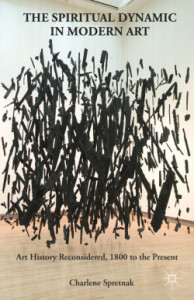 Charlene Spretnak has been intrigued throughout her life as a writer, speaker, and activist with dynamic interrelatedness. She has written nine books on various subjects in which interrelatedness plays a central role, including its expression in the arts. She is particularly interested in 21st-century discoveries indicating that the physical world, including the human bodymind, is far more dynamically interrelated than modernity had assumed. Such discoveries are currently causing a “relational shift” in our institutions and systems of knowledge, as she suggests in 'Relational Reality' (2011). In 2006 Charlene Spretnak was named by the British government's Environment Department as one of the "100 Eco-Heroes of All Time." In 2012 she received the Demeter Award for lifetime achievement as "one of the premier visionary feminist thinkers of our time" from the Association for the Study of Women and Mythology. She is a professor emerita in philosophy and religion. Her most recent book is on cultural history: 'The Spiritual Dynamic in Modern Art: Art History Reconsidered, 1800 to the Present' (New York: Palgrave Macmillan, 2014; paperback in October 2015) View all posts with Charlene Spretnak →