Since the discovery of the lodestone, a naturally occurring magnetized iron rich rock, we have been aware of a strange and invisible force in nature, a magnetic force.  The lodestone gave rise to the first compasses invented by the Chinese in the form of the charming spoon compass which was culturally imbued with ‘special powers’ and used in the divination practices of Feng Shui.

It was also the Chinese who later invented the more portable ‘needle compass’, 150 years before the English scholar and theologian Alexander Neckam’s first European reference to it in 1187.  It’s possible to make a thin iron needle magnetic by stroking it with a piece of lodestone, a process that became known to western mariners as ‘feeding the needle’ something that had to be done often due to the relatively weak magnetic field of the lodestone. The needle was originally pushed into a piece of straw or cork and floated on water, refinements to the needle compass have continued to the present day but is basically the same as it was a thousand years ago.

Lodestone hanging by thread (left).  Lodestone oriented to the North Pole of an enamelled compass rose above (images: R Paton)

This poem by William the Clerk of Normandy written in 1230 shows how knowledge of the compass was spreading and how it began to capture the imagination of this era as a navigational aid on ships.

‘Who would of his course be sure, when the clouds the sky obscure,
He an iron needle must in the cork wood firmly thrust.
Lest the iron virtue lack rub it with the lodestone black,
In a cup with flowing brim let the cork on water swim.
When at length the tremor ends, note the way the needle trends;
Though its place no eye can see – there the polar star will be.’

The humble compass has played a significant role in our cultural histories, from the early explorers establishing trade links through to colonial exploitation.  The fact that we need a compass at all has only recently been thought of as a bit odd when we think about the impressive migratory journey’s made by countless species constantly crossing the planet.

Research began on human magneto reception in the 1970’s in attempt to discover whether or not humans do have a sense of the earth’s magnetic field.  Dr. Robin Baker’s ‘Manchester Experiments’ first published in the New Scientist in 1980 thought he had evidence that we do possess this ability.  This fact was later found inconclusive when the experiments were repeated by others, the largest and most comprehensive experiments to date conducted by Joe Kirschvink et al 2019, have also concluded that, what we might call a ‘sense’ of the earth’s magnetic field is ‘not evident’.

So why then is it that experiments, conducted by scientists in labs around the world, are finding that most other animals (vertebrate and non-vertebrate,) do in fact have a sense of the earth’s magnetic field.  There has been ample evidence published in research journals in the last decade showing countless examples of this ability. One extraordinary migration is that of the Bar Tailed Godwit which travels from Alaska to New Zealand (around 10,000km) in a single non-stop flight lasting 7–9 days and nights without any land references.  Insects, mammals, birds, all manner of marine species, demonstrate a connection with the earth’s magnetic field, a sense of the earth that is now unavailable to humans.

We have literally lost our sense of direction our magneto receptive ability has become obsolete.  We can only speculate as to why this might be, perhaps a move away from hunting and gathering to farming 10,000 years ago made the need for travel less useful and neurological pathways genetically withered.  Whatever the reason it stands as a potent metaphor for our relationship with the natural world, there is literally a ‘sensory’ disconnection with the earth. This separation from the natural world was reified philosophically by René Descartes, the divorce between mind and matter fortified an established attitude of superiority over nature in the western world.  As cities have grown exponentially more than 3 billion people now live without any connection to wilderness except via a digital interface and so a gap in the understanding of nature widens with palpable consequences.

In my recent artwork I use the idea of a magnetic field as a metaphor to denote this disconnection with our planet and its animals.

My interest in mechanical automata and kinetic sculpture have helped me weave parts of this complex jigsaw puzzle together into something more condensed and digestible to the viewer.  In a piece called ‘Tempest Prognosticator’, an elaborate system of rotating towers representing various ecological habitats, are representations of some of the most endangered species found in those habitats. On top of each tower a compass (representing animal magnetoreception), the needles of those compasses are influenced by a lighthouse tower housing a strong magnet (represents the influence of humanity).  The whole mechanism starts to rotate as a viewer walks up to the sculpture, as each tower plays a discordant tune picked out by harps attached to sound boxes, a cacophony of discordance ensues as the compass needles fluctuate uncontrollably.  The piece was inspired by George Merryweather’s ‘Tempest Prognosticator’ (1851), an early weather warning invention employing the instinct of leaches to leave the ground as electrical storm’s approach.  An example of this invention can be seen in Whitby Museum, my piece on the other hand is more about the noise before the silence of the animals.

Here are a few detail images of the kinetic sculpture.   A film of the work and a downloadable booklet with more information can be viewed by visiting: http://richardpaton.com/the-tempest-prognosticator/ 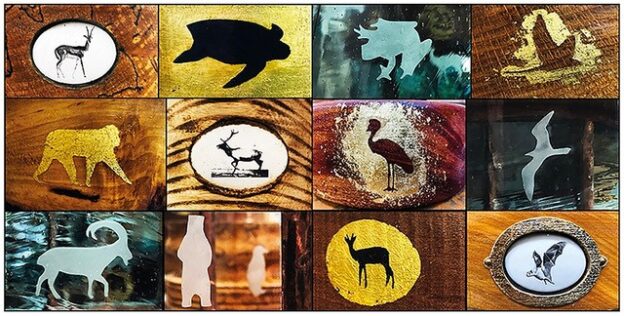 The humble compass is of course still used by hill walkers today but faces obsolescence as GPS technology becomes cheaper to buy.  Culturally it appears that we are becoming increasingly reliant on digital interfaces which further distance us from the phenomenon of the earth’s magnetic field.  But I feel the disconnection is more profound, our digital addiction in some ways make us blind, as Nicholas Carr argues in his book ‘The Glass Cage’, “Automation complacency occurs when a computer lulls us into a false sense of security. Confident that the machine will work flawlessly and handle any problem that crops up, we allow our attention to drift. We become disengaged from our work, and our awareness of what’s going on around us fades. Automation bias occurs when we place too much faith in the accuracy of the information coming through our monitors. Our trust in the software becomes so strong that we ignore or discount other information sources, including our own eyes and ears. When a computer provides incorrect or insufficient data, we remain oblivious to the error”.

Shopping Expedition’, R Paton 2019, using GPS to find items in a supermarket but the starting are co-ordinates were incorrect and instead takes place on remote moorland.  When we rely on technology Nicholas Carr calls this ‘automation complacency’.  (images: R Paton)

The ‘Shopping Expedition’ was a performance piece which parodies this idea of automation bias by using GPS to find items in a supermarket, but the starting co-ordinates were inexplicably incorrect and instead the shopping started on remote moorland.  In another piece of work which is the antithesis to GPS and AI, it questions where we are heading and why we might want to go there, I call it Arcas’ Compass. It uses the naturally occurring lodestone, aligning itself to the earth’s magnetic field which floats in a boat always pointing north.  Arcas was the King of Arcadia, a mythical, pristine, ancient land, this apocryphal compass allowed his travel through a romantic un-spoilt land using the invisible force of magnetic field lines. The piece is symbolic of loss but also a link to a past which many are now trying to reimagine.

I end by introducing Heidegger and his notion of being ‘enframed’ by technology which he says, “threatens man with the possibility that it could be denied to him to enter into a more original revealing and hence to experience the call of a more primal truth” (1977).  During the torrid period of covid-19 many have reconnected with nature and have appreciated its powers anew, but I wonder whether we sense the earth sufficiently as a species to prevent further disconnection and extinctions.

Richard Paton’s paper (June 2020) “To what extent can a magnetic field be a metaphorical canvas for new artistic perspectives?”, discussing these issues can be viewed here: http://richardpaton.com/thesis/