Man is an imagining being.Bachelard, Gaston. The Poetics of Reverie. 1960.

Gaston Bachelard was one of the great minds of our times. His prodigious ability, displayed in twenty-three books and expressed in subtle, suggested prose has produced the single most important body of thought in the recovery of imagination in the twentieth century.

Beginning his intellectual career in mathematics, physics & chemistry, he held a chair in the philosophy of science at the Sorbonne. Then he initiated a wholly new method of working with matter, penetrating to its essential core where the discourses of science, psychoanalysis & aesthetics merge. His poetics of Air, Water, Earth, Fire & Space have become indispensable for the study of images – – in dreams, alchemy, poetry & literature & psychopathology.

This video by 0ThouArtThat0 is a reading from p. 84, “Poetic Imagination and Reverie” (2005, transl. by Colette Gaudin) and perfectly captures Bachelard’s inspiring prose.

I am a dreamer of words, of written words. I think I am reading; a word stops me. I leave the page. The syllables of the word begin to move around. Stressed accents begin to invert. The word abandons its meaning like an overload which is too heavy and prevents dreaming. Then words take on other meanings as if they had the right to be young. And the words wander away, looking in the nooks and crannies of vocabulary for new company, bad company.

Gaston Bachelard: The Poetics of Reverie. 1960 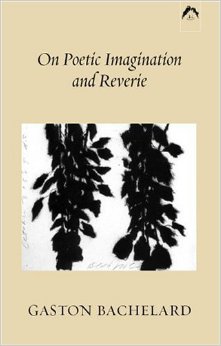 Gaston Bachelard (1184-1962) was a French philosopher who rose to some of the most prestigious positions in the French academy. His most important work is on poetics and on the philosophy of science. To the latter he introduced the concepts of epistemological obstacle and epistemological break. He influenced many subsequent French philosophers, among them Michel Foucault and Louis Althusser