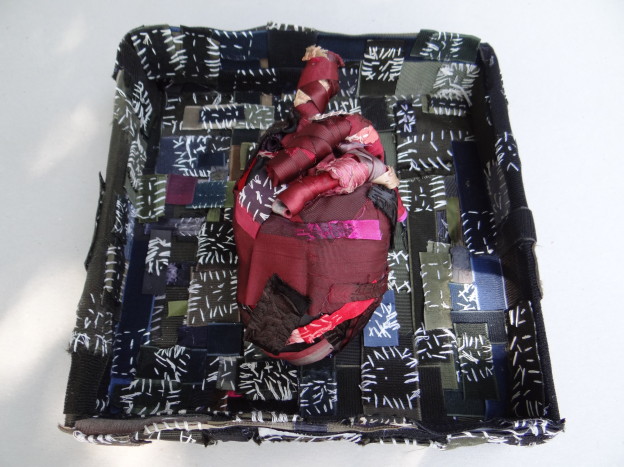 I started working using the most traditional technique, that of weaving.  The first works were exciting not only because I was weaving, but because I understood that every material used had its own personality and was able to give other meanings to the same composition. Each thread, conventional or not, was a challenge. It was just the beginning of a long series of personal discoveries.

Textile arts are dependent on the material. Upon their detachment from external influences, they have developed their own language of communication through form, especially through material. The new vision of space exploration could bring this kind of art closer to sculpture, its specificity being supported especially by the material being. This is the start of the great adventure, of the creative division, even with the choice of materials, the ingenuity of their use, the new situations created by juxtaposing them, the newly-resulted “universes”.

Sometimes, as I was trying to access the depths of the material study, revealing its history and finding its potential for metamorphosis, I discovered the message of the work that was to be born. However, the technique being only a means to achieve the aim, I realized that it was enough to know it to move forward, weaving the aesthetic value with the meticulous rendering. 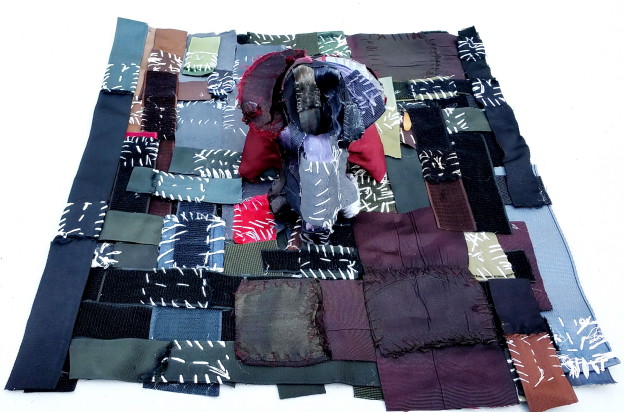 Each material opened another possibility. After experimenting the possibilities offered by different materials, there followed a long line of attempts. The string, the wire, the thread made of paper, wax and even leaves, were just some of the materials that I tried to know and customize in my attempts.

On the other hand, I pushed the limits of non-textile materials and I did however make them reveal the features of textiles, so I started looking frantically for other new textures, other fluidities.

Interfering with painting, graphics and sculpture, textile arts are generous on the technical approach and imaging.

Besides the subject matter, searching and testing the shaping capacity of each natural or artificial material, passing from the classical weaving technique (haute-lisse) to the technique adapted to each type of material, thread or fibre, I studied different assembly possibilities. I brought my own observations and emotions in subjects that interested me that were born immediately, depending on where I was, on different situations, anchoring myself deeply in nature as well. I think that, regardless of the factors that influence or our willingness to belong to a particular style, individuality brings uniqueness.

The discovery and the opportunities offered by Lunaria plant led me to the decision of using natural, unspoiled, subtle colours, thing that changed with the subject that I approached, that of man, of his shell. 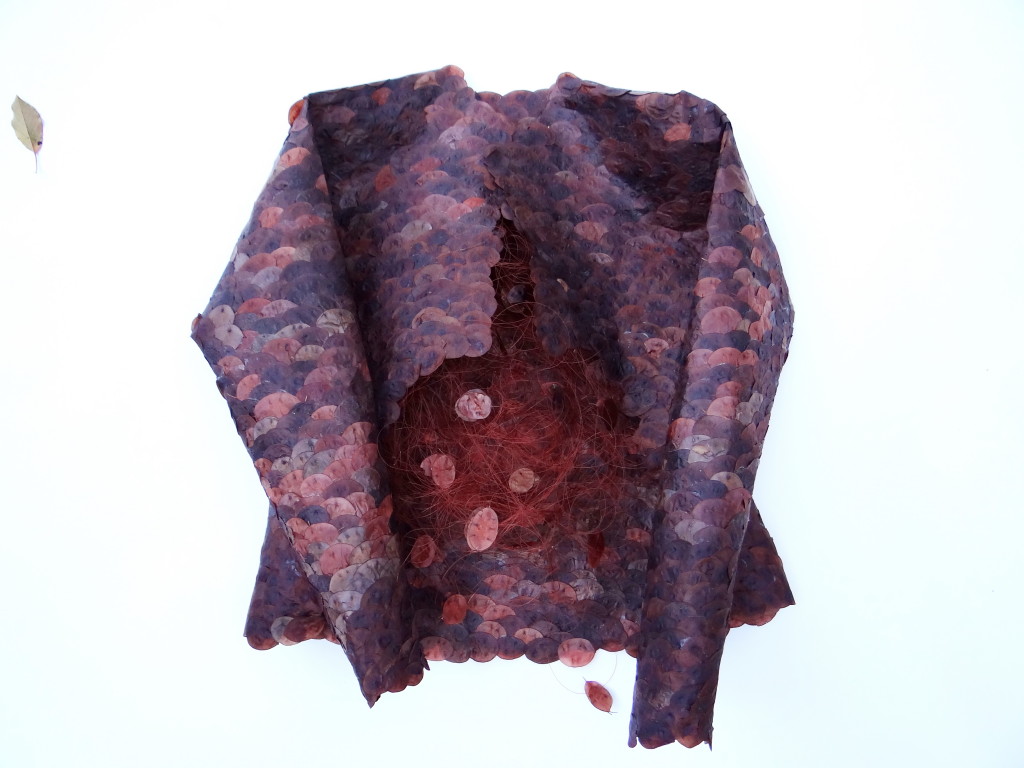 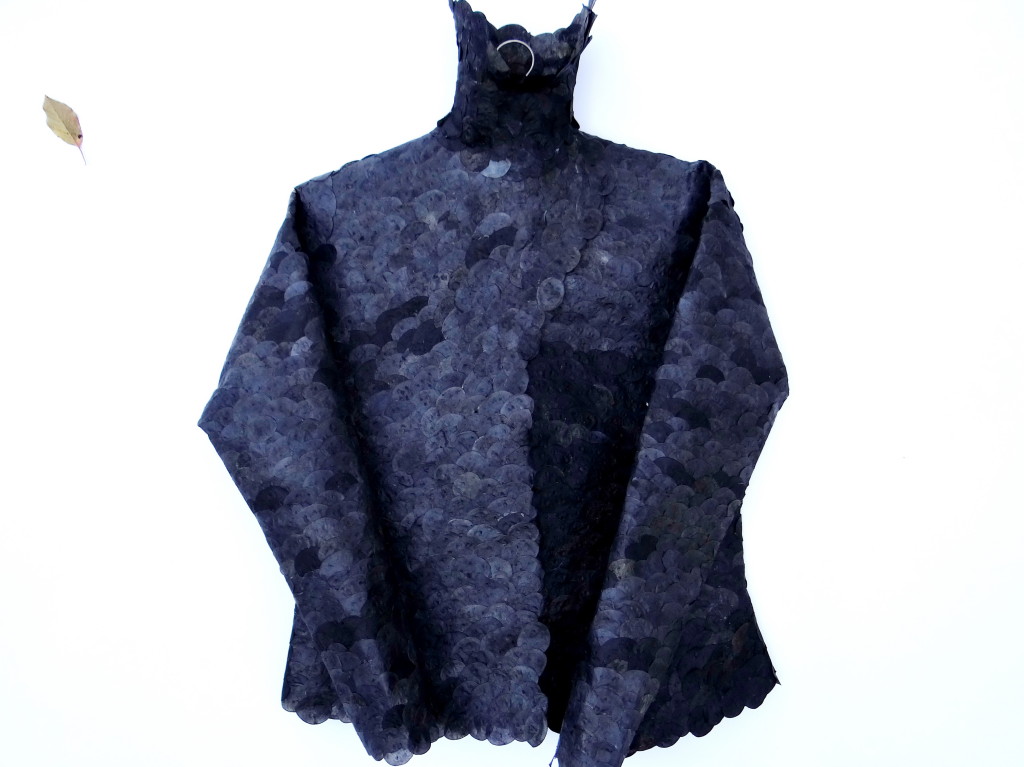 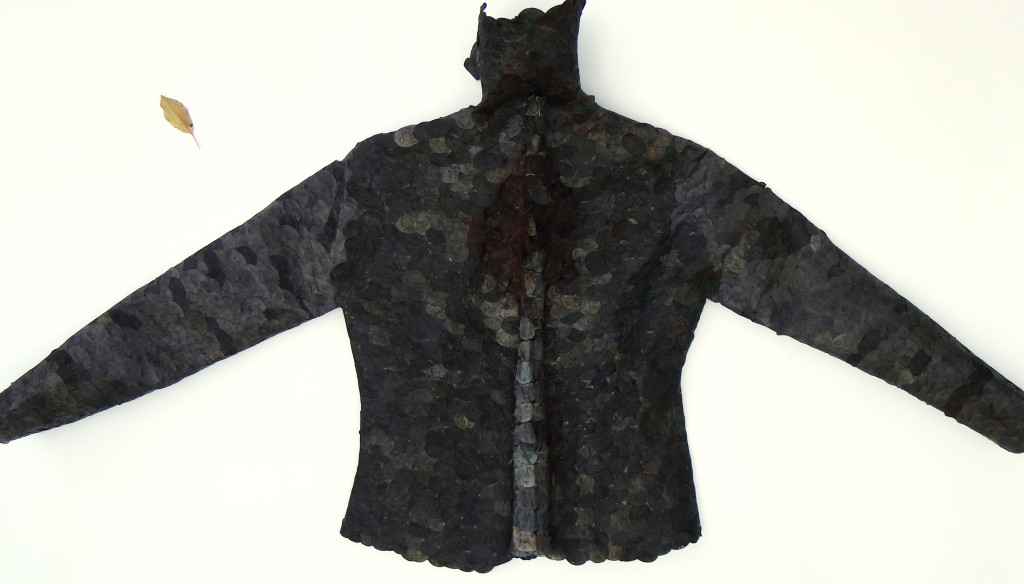 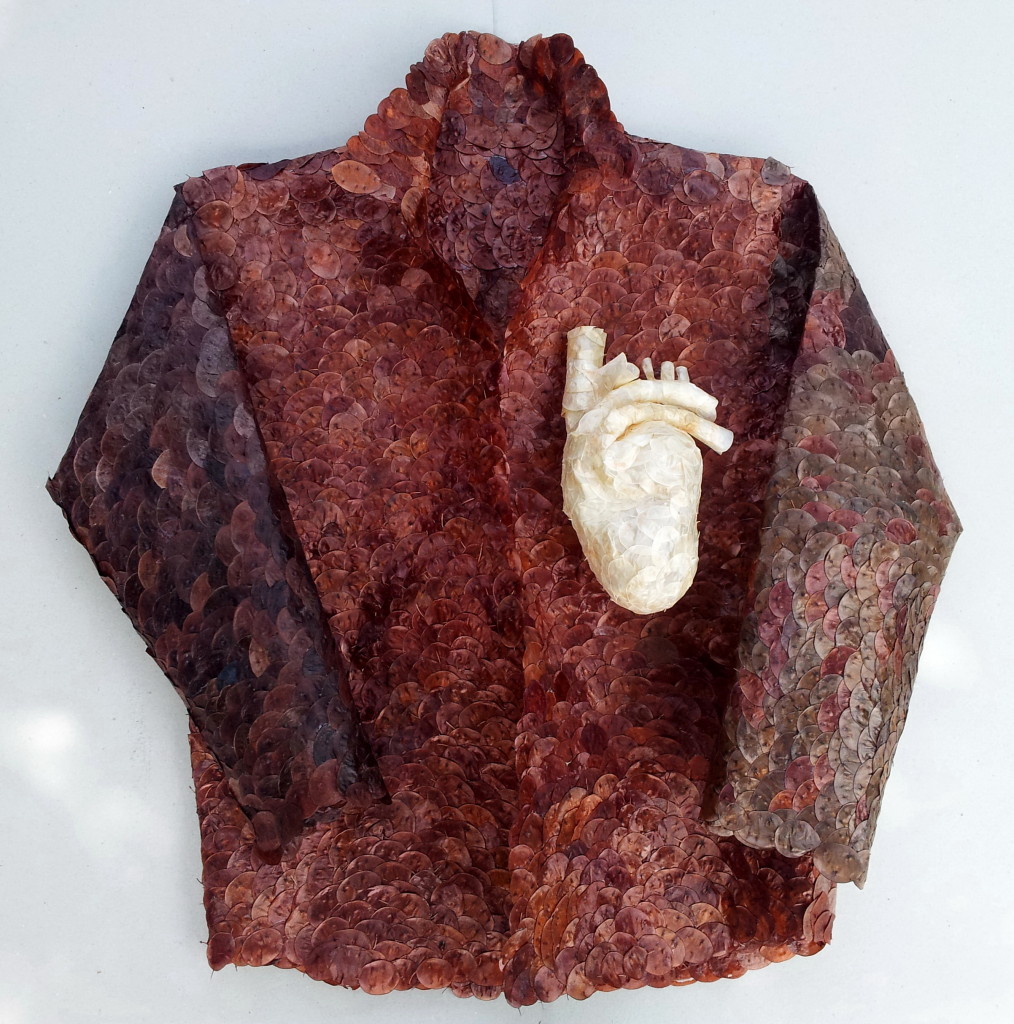 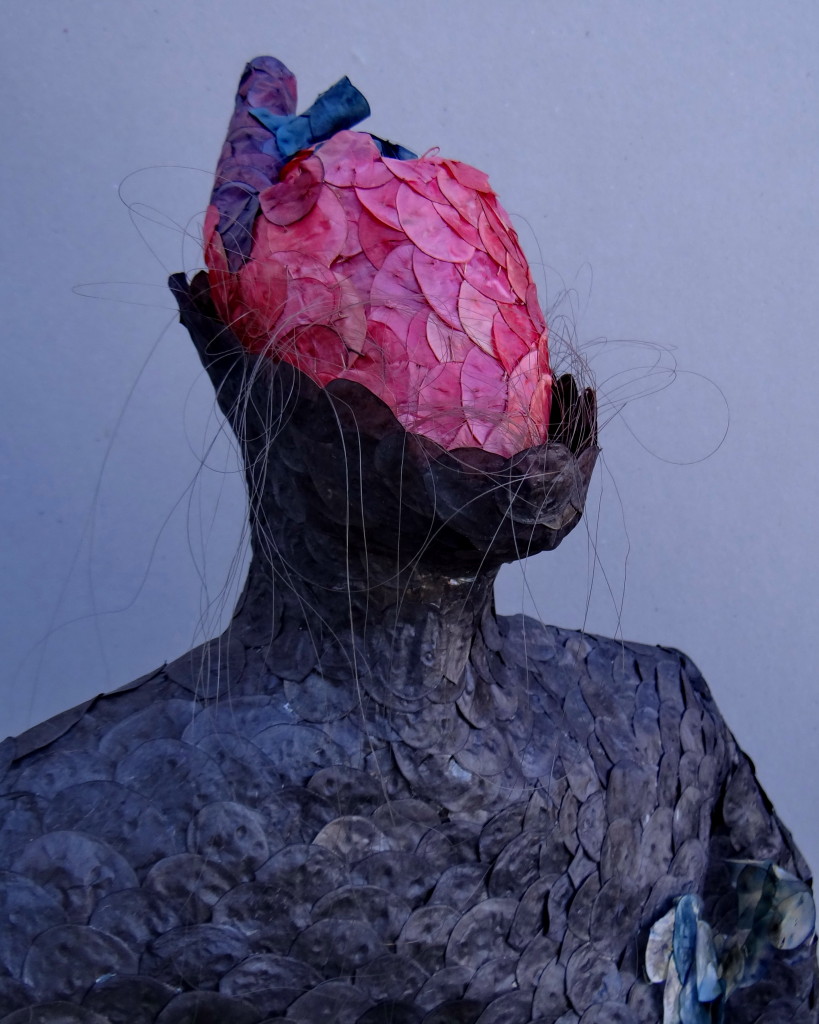 Black anatomy series has started from the premise that we are ephemeral. Everything we do is ephemeral, only moment, state. These works that have the man and his sufferings as central subject, I can say that they were born of some reflections on death. The human fragility is comparable with the frailty of the leaf. The body becomes a garment carrier of meaning, sometimes it is crossed by the heart, the lungs, the spine, the inside of this body turning into design or volume that displays on the outside or transforms the inside. There is a constant dialogue between the materials used, the body shape and the meaning of each associated element, namely the heart, the spine or the brain.

Everything is a well dosed amalgam where the heart, for example, becomes a decoration and a warning, the spine supports, but is also weak, while the lungs become blue reliefs that claim the place on the garments, trying to be in tune with its colour.

Why is all this happening as an elegant display? Because we are too busy to see the aesthetics and not to see what it becomes. We want to remain perfect and we cannot turn the defect in quality.

On the other hand, nonchalantly displayed anatomical elements on the garment map, exactly where they are hidden in the physical body, they become signals. To me they are alarm signals. They shout that suffering can become unbearable, but that we bear with dignity until the end. They have a melancholy note, eventually becoming aesthetic.

It is far beyond me to use the suffering to astound. I do not want to make something oppressive out of it. These are simply thoughts that have taken material form because I felt deeply that I must draw attention to the ephemeral, the passage through life or life transition.

I wanted to create an inner dialogue between these garments, which I allowed myself to introduce into the soft-sculpture area, and in each of us. 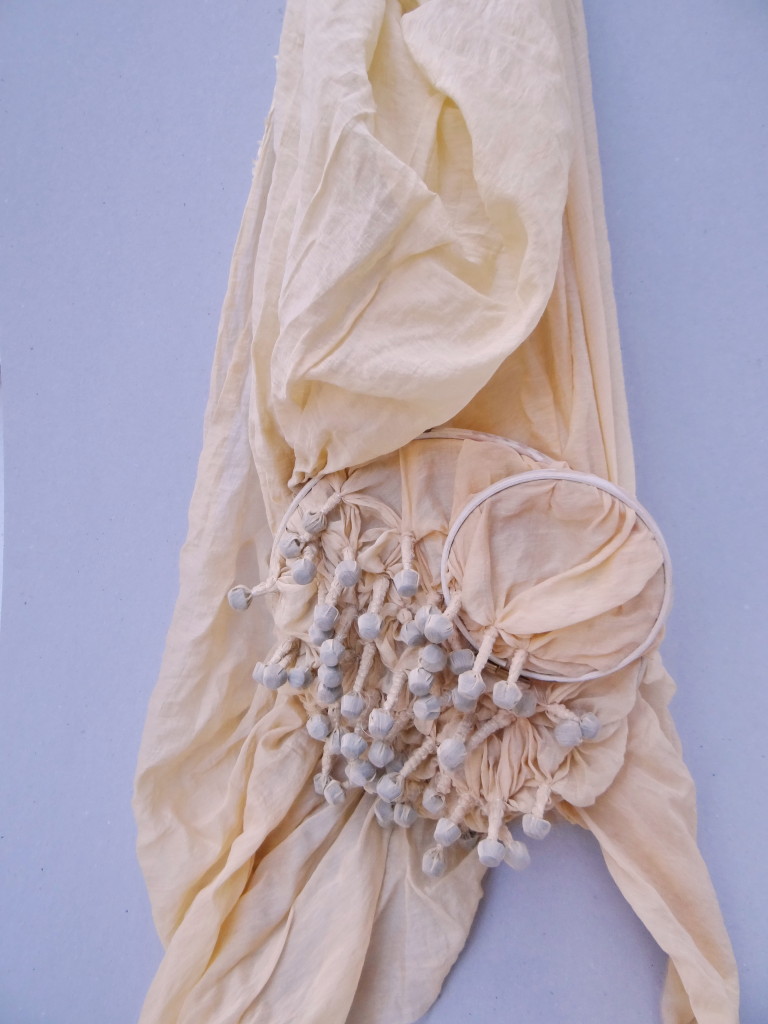 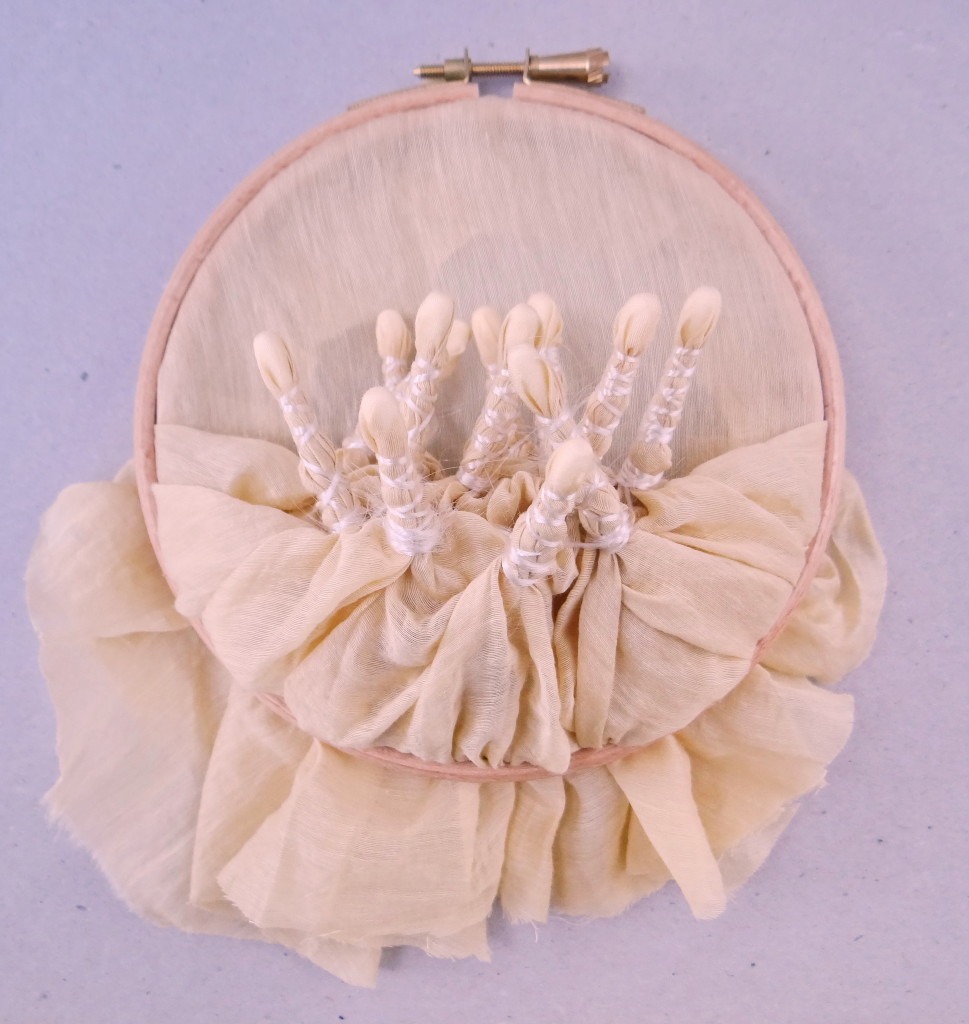 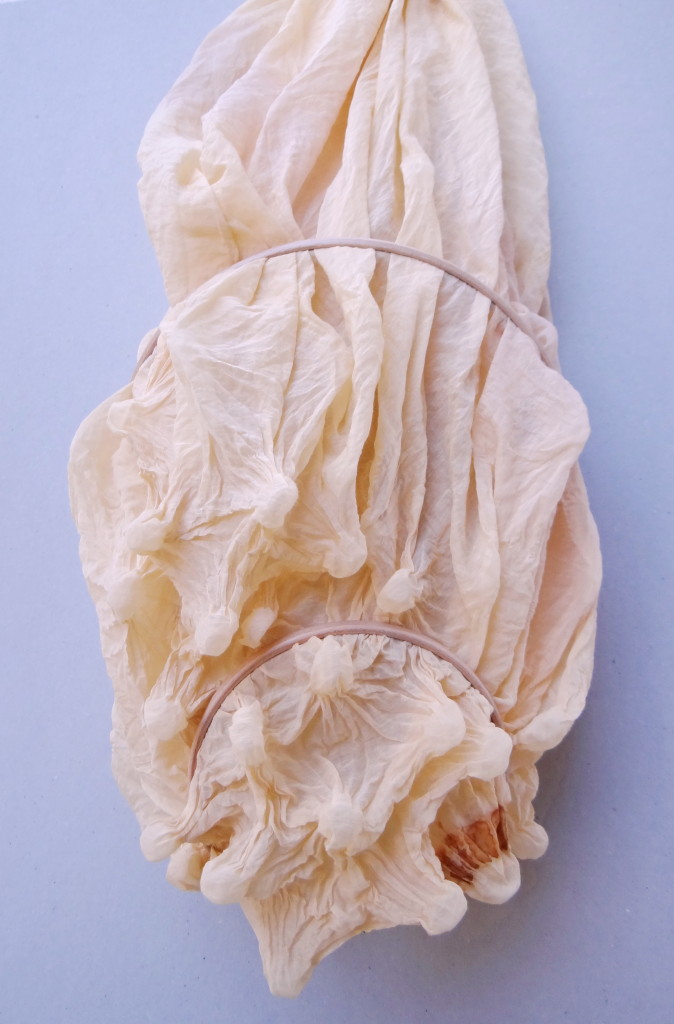 In the Microscope series, I have continued to study structures that can have multiple meanings from the deep ones of the micro-universe to the simple experiment. The inside of each circle retains a small world that could have the significance given by the prism through which you want to look at it. I do not give explicit examples because sometimes we have to see what we want to see, not what is imposed on us. The micro-universe proposed to the viewer is a visible structure continued by the viewer’s imagination.

Nothing is real unless it is observed, John Gribbin says. Starting from this premise, I invite the viewer to have the patience to imagine, to observe and to compare. The microscopic world reveals a multitude of patterns and colours, I have rendered some elements with the intention of developing this subject whenever I have the opportunity or a new path opens. The unseen world which we see on a microscope strongly shows its effects, sometimes on the human body, invading it with a variety of shapes and states, carrying it through various states. So I try to process texture, to enlarge it, to uncover it by presenting it into a warm light, in a textile form. 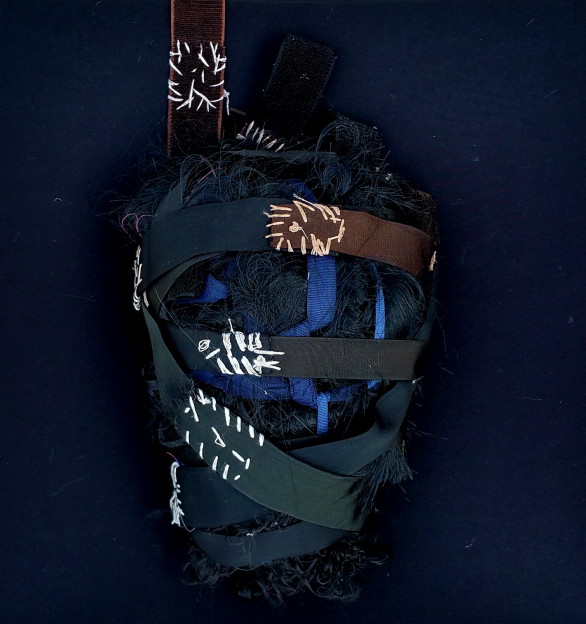 And, finally, passing by this chapter of the micro-universe – an unclosed chapter – I will continue the series of human anatomy studies in a textile manner, to the transplantation chapter, the use of all the means to preserve life at all costs beginning to take shape. It is a space that I have barely begun to explore and that opens many possibilities. The seam that we assign to the textile field is an important factor in the medical field. I want to use the seam explicitly, everything becoming visible and exaggerated, repaired. The repaired forms are ready! In this case they are ready for reflection.

I am interested in the physical inside, the medical world is an inexhaustible source of inspiration. I do not want to discover the negative side, I do not necessarily want to talk about pain, about the unwanted moments in our lives. I just want to draw the attention to what can happen! 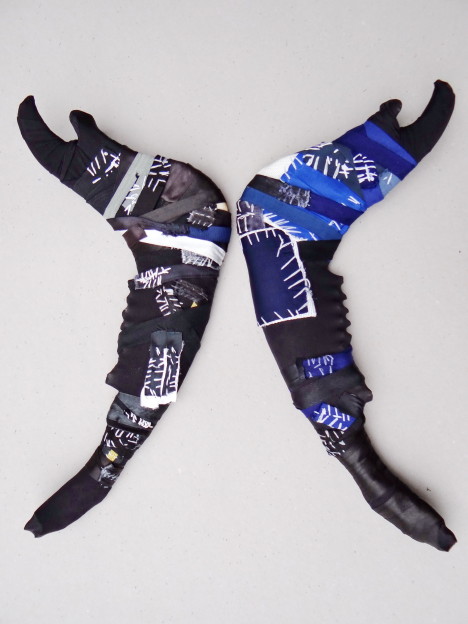 Valentina Stefanescu is a textile artist whose professional field is education in textile, contemporary textile art and craft in education, drawing and painting. She has taken part in a number of exhibitions both in her country and abroad. She started with art education at the Faculty of Fine Arts in Timișoara, Romania where she studied Textile Arts. In 1999 she was awarded in the First Biennial of embroidery held in Cluj Napoca, Romania. Her creation was exposed over time in many biennials and major exhibitions in Hungary, Belgium, the Netherlands, Italy, France, Turkey. Annually organizes various exhibitions including the International Biennale of Miniature Arts Timișoara - BIAMT. She is currently Lecturer PhD at the University of the West Timişoara, Faculty of Arts and Design, specialization in Textile Arts. View all posts with Valentina Stefanescu →