The heartbeat marks both the beginning and the end of life. It symbolizes our finitude. The symbolic meaning of the heart can hardly be overestimated as a temple of the feelings of fear, love, purity and identity.

In ancient times the heart was often seen as a synonym for the soul. In her 17th century poems Maria van Wieringen describes her vow of purity by symbolically donating her heart to her groom Jesus Christ, who in exchange resides in hers. The exchange took place through Jesus’ side wound, which was situated close to his heart.

The adoration to the Sacred Heart (or Most Sacred heart of Jesus, Sacratissimi Cordis Lesu in Latin) is one of the most widely practiced and well-known Roman-Catholic devotions. The physical heart of Jesus is taken as the representation of his Divine love for humanity. It is therefore represented as a flaming heart, shining with divine light, pierced by the lancewound, encircled by the corn of thorns, surmounted by a cross and bleeding. Sometimes Christ is pointing at the heart with his wounded hands.

The Immaculate heart is referring to the Virgin Mary with her virginal love for God the father, her maternal love for her son Jesus and her compassionate love for all people. Her heart is often depicted pierced with seven swords or wounds, in homage to the seven dolors of Mary, also a very popular Roman Catholic devotion.

I was raised a Roman Catholic. In the seventies it was the habit of young children to go to catechism lessons in church. In my village, church was right next to school. While listening to our pastor on uncomfortably hard chairs, my attention often wandered off to the sculptures and paintings decorating the small church. My first encounter with a three-dimensional representation of the human heart was in that church. I was fascinated by this bleeding, naked ‘Most Sacred Heart’ of Jesus, surrounded by Goldleaf and shown outside the physical body and I spent many hours just gazing at it.

Sometimes a work presents itself when you expect it the least. It emerges, disappears, emerges again to be picked up and worked with. I have become experienced in patience and maintaining confidence during the ‘slow’ periods in my life, these periods of time where I seem to live in a vacuum waiting for something undefinable to happen. 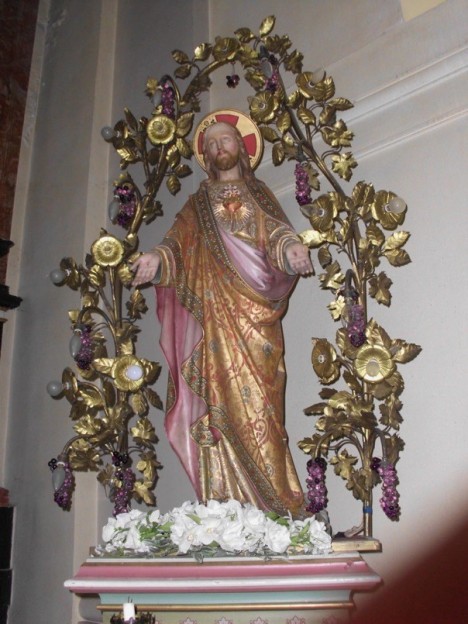 This is the sculpture presenting the Most Sacred Heart of Jesus, in the church in Adegem (Belgium)

It’s a ringing in my ear

And I can’t really hear you

In the thickening of fear’[1]

Every person has a persistent difficulty in expressing his or her own intentions; everybody fails in fully understanding the other. We never come to coincide with one another in a symbiosis of mutual understanding. You might come to the conclusion that it is impossible to communicate. We are all alone.

My work displays this basic human struggle against the drama of fundamental loneliness and the persistent search for humanity and empathy, in multiple series of artwork inspired by comparative biology, morphology and anatomy, treating death and birth, decay and renewal.

I had no idea how nature shaped these strange, attractive and unusual stones so I did some research. The cliffs of Etretat are very old, they arose like giant walls in the Upper Cretaceous (100,5-66 million years ago), consisting mainly of white chalk and flint. Rain and seawater dissolve the poreus chalk of the cliffs, thus promoting decay. The limestone is dissolved and absorbed, leaving the characteristic pebble beaches along the alabaster coast, littered with the very popular flint stones. 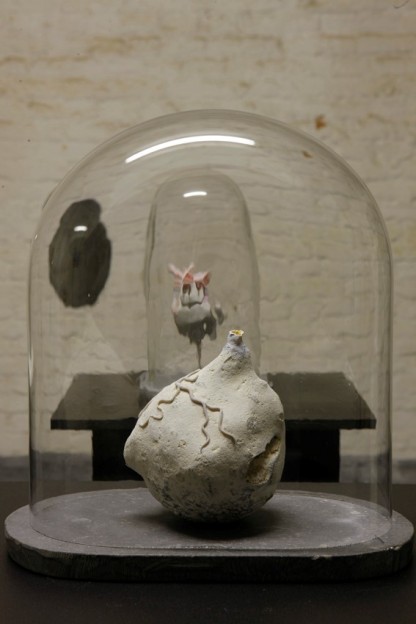 ‘Mare Frisicum Heart’ or the heart of the North Sea. Silex stone, wax

In 2010, I made a second heart, the heart of a man. There is an interesting story behind it. I received an invitation to the opening reception of a major exhibition in Venice. I had no knowledge of the fact that there were actually two kinds of invitations: the red ones and the black ones. Red cards were allowed first on the water-taxi to the island where the reception was taking place. The black cards had to wait. Arrived on the island, everyone moved on to the fence. There was a second control: the red cards were allowed in, the black cards had to wait another hour. Through the bars of the fence we saw a feast, we heard a band playing, laughter, fun… We were on the wrong side, in a very uncomfortable, humiliating position. We were thirsty, with sore feet, no fun at all … many “blacks” were complaining.

Suddenly, the artist arrived. He recognized me and my partner and we were invited in. In the blink of an eye, I was with “the Reds”. I was in the other camp.  My friends and colleagues were out there. What is the right thing to do here? I could play the game, enjoying the drinks, the music, the conversations and the attention, being accepted as part of ‘the established artists, curators and collectors. I could also refuse to participate and go back behind the fence voluntarily. Someone whom I deeply respect confronted me with how people can react and treat each other and how careless I was going with these power games.

I was stuck with a serious moral dilemma for weeks.Then one day I went into in my studio, took a stone and my grinder and sculpted a human heart. This heart is distorted, bloated and flattened: a human heart in bluestone.

I decided to make it anatomically as correct as possible, although distorted. Bloated as it is, it symbolises the self-righteous nature of man. Man with his high self-esteem, leaning towards overconfidence. It was made out of an old stepping-stone, a threshold in Belgian bluestone. 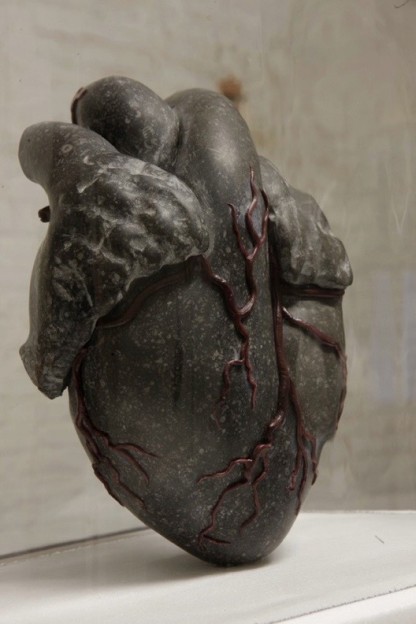 ‘Homo Sapiens Heart’ or the heart of a human. Belgian Greystone, wax, glass

I did some research into how the muscles of a beating human heart look, but in 2010 it was impossible to find a live beating heart on the Internet. My search brought me to an online video with the beating heart of a red salmon, caught and filleted alive. The still beating heart was swallowed with great pleasure. It seems to be an initiation amongst fisherman in Canada.

The initial steps in the creation of ‘The Heart of the Matter’ happened purely by coincidence. The research to the anatomy and morphology of the heart pushed me to a new path, where the hearts of animals became as interesting and as important as the human heart. This unintended but highly esteemed path determined the evolution that ‘The Heart of the Matter’ was about to take.

Chantal Pollier ( ° 1965) graduated in Psycho-analysis and clinical consulting at the University of Ghent in 1990. She worked for eight years as a developmental psychotherapist in a centre for children with learning disabilities or/and socio-emotional problems... She also graduated in sculptural techniques at the KASK (Royal Academy of the Arts of Ghent). in 1991, specialisation stone sculpture techniques and moulage techniques. Ephemerality, balancing the line between being and not being, decay, the physical appearance of the gradually disappearing and ultimately death, are her themes. She makes series of works in stone, wax,glass, silver... depending on the topic of her work. Drawings and paintings often precede her threedimensional works and sometimes become works on their own. Recently her works evolved to a more poetic approach of the same themes: ‘the heart of the matter’, ‘history of thoughts’ 'Nursing Corps' being examples of that. Time grabs us by the throat when we least expect it. View all posts with Chantal Pollier →