“My work is about the spirit of discovery of what is still unknown to science, going beyond the edge of the universe and exploring the layers that go back to our origins.” 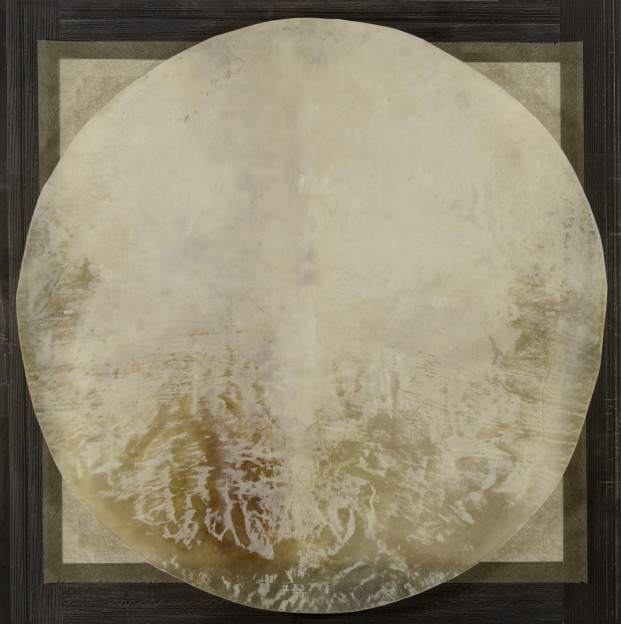 I am collaborating with the European Space Agency which has opened the depths of space and time for me, prompting my curiosity for the period of time just before Climate Change started circa 1820. This was a time of polar exploration just preceding the Industrial Revolution when we, humans, started to etch ourselves into geological history. The series of work ‘Cyathea australis, is deceptively simple in form, consisting of photogenic drawings that narrate the changing state of the Earth’s atmosphere. I am using the early tools of photography reducing this medium to its bare essentials in a series of photogenic drawings that interrogate an era before the Anthropocene. I have been using fossilized leaves to reconstruct the ancient atmospheric carbon dioxide record from 330 to 260 million years ago, and large rainforests expanded throughout the tropics, leaving as their signature the world’s coal resources. In tandem with this scientific study, I set up a dark room in the atmospheric chambers to record the silhouettes of our earliest plants. Using silver nitrate and light I created a series of ghostly imprints generated by a 400-million-year- old atmosphere – an atmosphere so deadly that two inhalations would suffice to kill a person. This constricting and resonant environment calls to mind the fatal impact our collective activities have had on our planet. The journal Nature Geoscience: ‘Cyathea australis,’ Front Cover: http://www.nature.com/ngeo/journal/v9/n11/covers/index.html 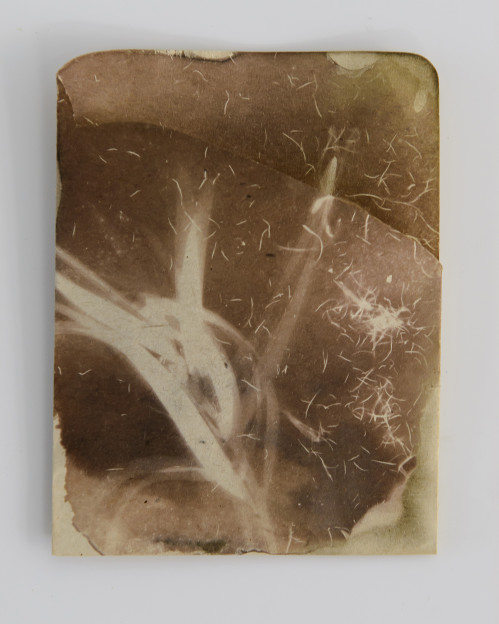 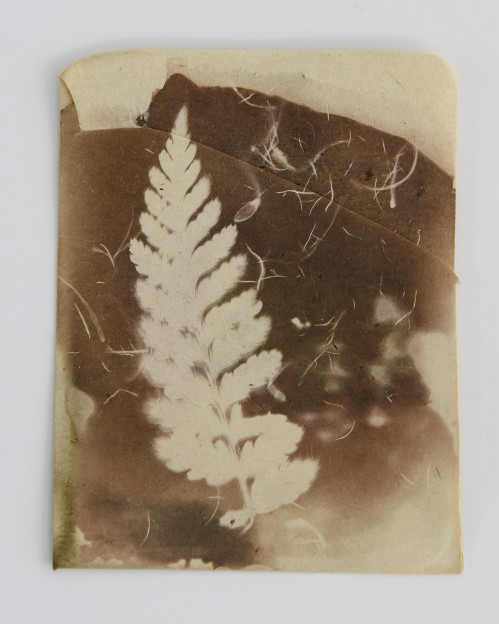 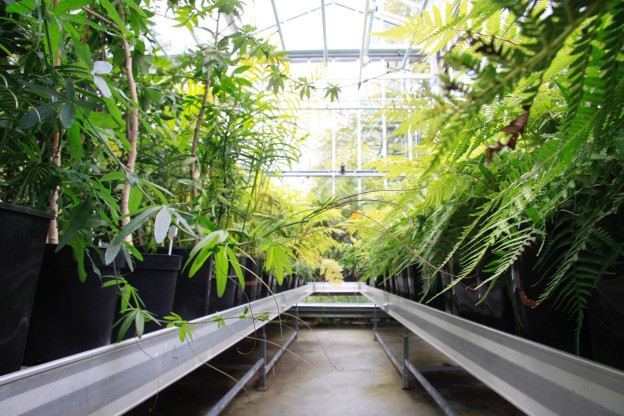 The Research Lab for Cyathea australis (2017), UCD program for Experimental Atmospheres and Climate.

My research for this project was extended in 2015 when I found myself on a barkentine Arctic expedition in the same waters that had subsumed ships and Arctic explorers for hundreds of years. By 1823 the North American Arctic was still the last undiscovered ecosystem on the planet. It was a landscape so cold that it fractured everything it penetrated, including the stones. It was uncharted, unclaimed territory and Europeans had perished in it miserably. I was captivated by the story of the disappearance of the Franklin ships in 1845, the mythical expedition of two Victorian-era vessels that vanished while searching for the Northwest Passage. I am retracing this territory by developing Unknown Landscapes, a series of oil paintings based on photographic plates from these expeditions. The cameras survived in the permafrost when the ships and crew disappeared into nothingness. The plates carry the melancholy and the magic of those frontier times. 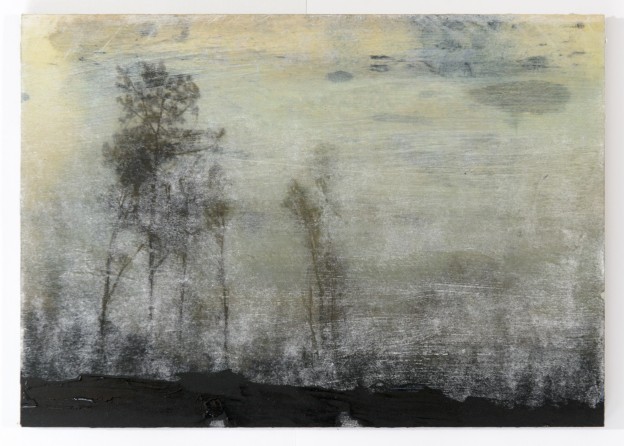 Siobhan McDonald: ‘The trees are murmuring to one another’. Oil on board
25 x 24 cm 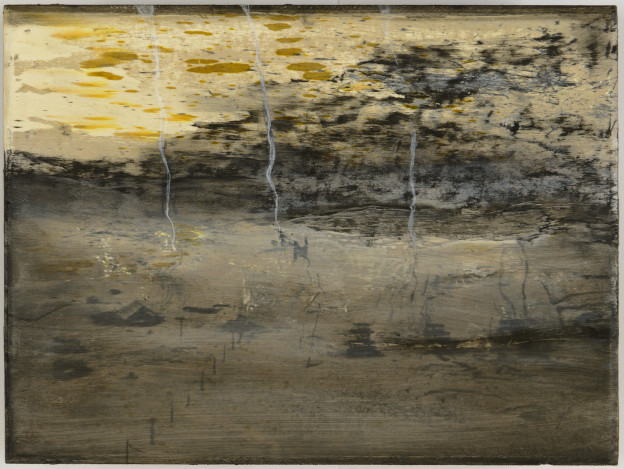 Extraordinarily, last year, the story of the 1845 Franklin Expedition hit the headlines again. I was stunned to discover the second captain on the doomed Franklin ship happened to be an Irishman with a keen interest in botany. Buried in the Antiquities Department of the National Botanic Gardens is a superb collection of arctic pressings from the 1825 expedition that have never been on public view. These seeds that belong to another time are an important finding as they represent that moment just before the Industrial revolution that we can’t go back to. I extracted some 75 seeds from the pressing and am developing a work, A space and time outside, with The Millennium Seed Bank at Kew Gardens, to explore the potential life force of these seeds from the Arctic that have not been around for close to 190 years. 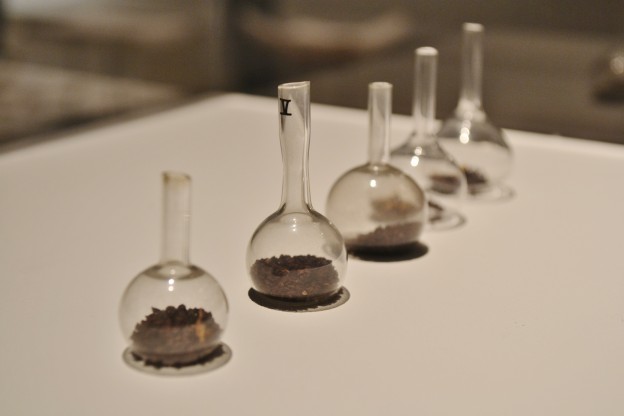 Siobhan McDonald: ‘A space and time outside’.
Seeds brought back from the 1825 Franklin Expedition. Courtesy of the National Botanic Gardens 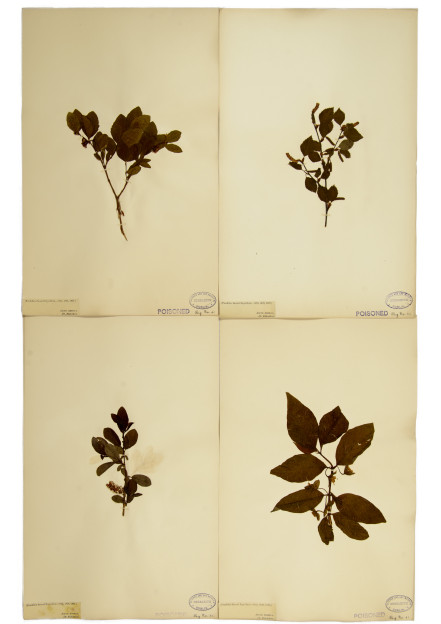 Siobhan McDonlad: A space and time outside’.
Herbarium constituents, 1-2, pressed plants, brought back from the 1825 Franklin Expedition. Courtesy of the National Botanic Gardens

Another work related to the theme to Crystalline stems from my collaboration with the European Space Agency (ESA). This work is a poetic response to the retreating Arctic glaciers that were mapped circa 1845 when the region was still a blank space. To make this installation, I am working with a material developed by scientists at an Irish company called Enbio. They have developed a revolutionary use for carbon[1], as it is one of the most indestructible materials on the planet and is essential to all forms of life on earth. Each piece in the installation is coated with a pigment once used by early cave painters to coat the walls of their shelters and now used to cover the outside of space equipment. The surfaces for Crystalline are cured at high temperatures to create a motif of cracked and disjointed cartographies, which exude an air of shabby beauty. Their cracked surfaces seem vulnerable.  Using charred bone (used for thermal control of satellites and deep space probes,) I am spray painting the material, re-enacting a process used in space technology. 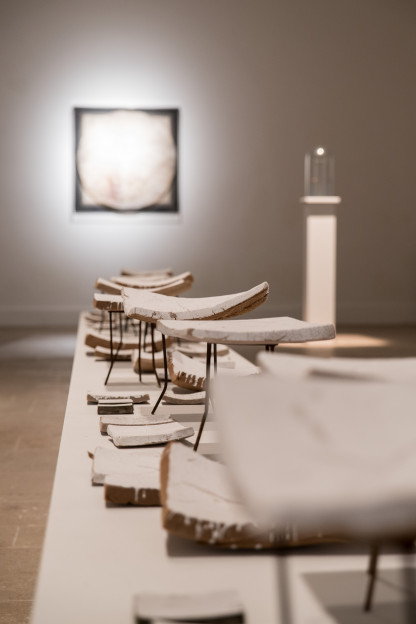 ‘Crystalline’
The exhibition is named after a keystone piece, Crystalline (2016), composed of foam substrates coated with a pigment that contains carbon and charred bone developed by a company named Enbio for the European Space Agency (ESA). Inspired by the materials used by cave painters, Enbio’s “SolarWhite” will bond with the titanium heat shield of ESA’s Solar Orbiter, to be launched in October 2018. In Crystalline, the cracks and bubbles of the white tiles reference both the ice that thwarted Sir John Franklin’s doomed search for a Northwest Passage and the melting glaciers of the Anthropocene. 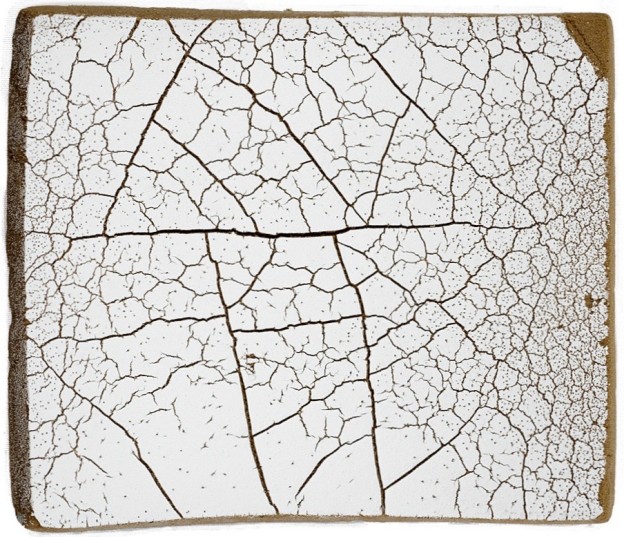 ‘Crystalline’, detail: is a series of artworks relating to the dying glaciers.

A sound piece is prompted by my experience of the arctic shelf melting. On my research trip in 2015, I used a heliograph[2] attached to the binnacle of the ship to create a response to the melting glaciers by recording a soundscore of the sun track on Summer Solstice. I recorded messages and pulses as the sun moved through the sky on the 21st June 2015 to produce a series of notations for a sound score. The burn holes are photographic in the strictest sense as each mark is a small black sun and each dot is a repeat pattern of the sun’s image scaled down many million times (150 KL away) on its journey to the earth. Next year, an original music score by Irene Buckley with recordings I made in the Arctic will be beamed into space from the European Space Agency.

‘At the Edge of Visibility’ 2016. 4 minute film by Siobhan McDonald.
Shot in the Arctic Circle in 2015. Edited by Christopher Ash.
Sound composition by Irene Buckley containing sounds collected in the Arctic by Siobhan, sounds of dying glaciers recorded by Professor Chris Bean and sounds recorded in space by ESA. This film is part of Siobhan McDonald’s solo show ‘Crystalline,’ at Centre Culturel Irlandais, Paris 2017

The first phase of this work was exhibited at The Centre Culturel Irlandais, Paris earlier this year. It has prompted a number of reviews in English-language and French media, including the Apollo art magazine and the French weekly Télérama, which said the show was “beautiful and intelligent: two adjectives rare(ly strung) together.” 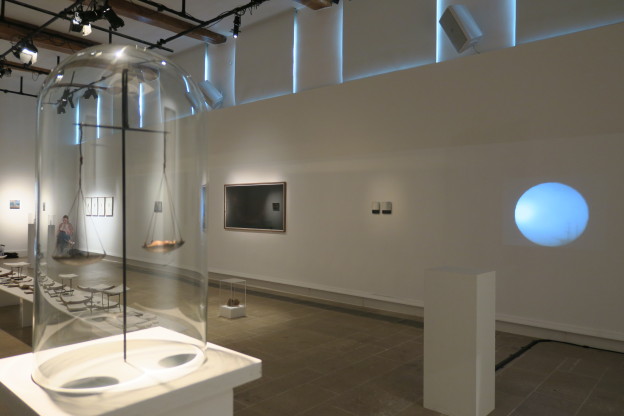 Apollo’s Tom Jeffreys added “McDonald commemorates the vast diversity of the environment we inhabit and explores our equally diverse responses to it. She does so deftly and with an aesthetic that is at once coherent, understated and quietly powerful”.

Terry McMahon, an Irish film director says “McDonald’s work is provocative, complex and profoundly moving,” says “Her interrogation of humankind’s fragile position in the universe is a daring assault on the senses that plunges the viewer into a river of history that goes right to the core of our existence. Yet, rather than these waters being dark, her show somehow reveals what a miracle our species is.” 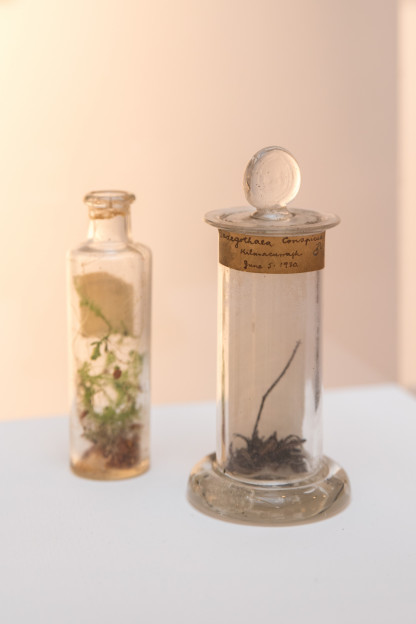 Deborah Dixon reviewed the show for Science saying “Avoiding the apocalyptic imagery and the nostalgic romanticism that frame much of the creative response to the Anthropocene, Crystalline is a delicate, considered collection that both mourns and reanimates science’s relic objects and techniques. It brings to the foreground the materials through which science knows and records the world, as well as the materials through which science constructs the world anew, and asks us to question the impetus and consequences of an often technologically driven endeavor that strives to make sense of our changing world and the cosmos within which it travels.”

[1] Scheduled for launch in 2018 Enbio will apply a contemporary version of the charcoal, made from carbon and burnt bone, to the outside of a spacecraft’s titanium heat shield. According to AFP, the pigment’s color is perfect for reflecting solar radiation.

[2] A heliograph is a device that was historically used to record the sun and Tom McCormack, Physicist at UCD designed a version for Siobhan’s 24 hour light recording in the Arctic.

Siobhan McDonald is ‘Artist in Residence,’ at University College Dublin 2012 – 2017. She is interested in the changeable nature of landmass, historical events and their interconnection to time. Siobhan goes to diverse locations like Iceland and the Arctic Circle to record and distil what is ephemeral and essential in theses fragile landscapes.

Her approach combines fieldwork and research museums, archives and laboratories with an active studio-based practice. In the development of new ideas she works with organisations such as the international Volcanic project: Futurevolc, The Geological Survey of Ireland, The School of Cosmic Physics, Dublin and The School of Geological Sciences, UCD. Using diverse methodologies, Siobhan works collaboratively with historians, scientists & composers on projects combining ideas of interaction on the natural world and materiality. 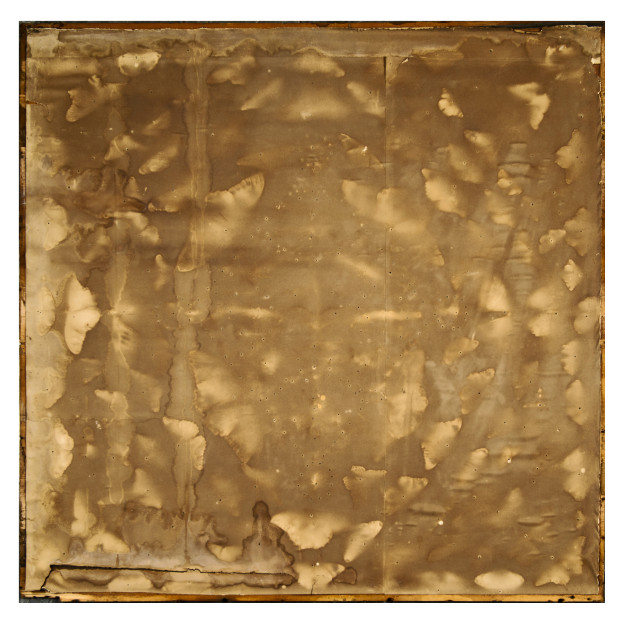 Crystalline has entered vital arenas of interdisciplinary exchange through coverage in:

All images copyright and courtesy of Siobhan McDonald

Siobhan McDonald is an award-winning Irish artist interested in the changeable nature of landmass, historical events and their interconnection to time. She is an artist in residence in the School of Natural Sciences at Trinity College Dublin (2017-2019.) McDonald is working with world-leading research facilities such as The European Space Agency (ESA); The JRC European Commission and The European Research Council to explore Ecology in light of current ecological concerns. Across these research labs, McDonald pursues knowledge to ask questions about the structure and history of the earth. Her art practice calls on notions of what is still unknown to science, exploring the Anthropocene and the recent consequences of our treatment of nature. McDonald works with a diverse group, including historians and scientists to manifest projects that take the form of painting, drawing, film, and sound. www.siobhanmcdonald.com View all posts with Siobhan McDonald →