The health of our soils is a topic that, sadly, has never captured the level of attention devoted to the conservation of  ‘charismatic megafauna’ such as the giant panda or humpback whale. But, thankfully, it is increasingly being recognised that not only are healthy soils essential for the production of food for a growing world population, but they are also a vital part of our global ecosystem, acting as a carbon sink to reduce the impact of climate change.

As we know, soils filter our water and protect us from flooding, and provide fibres for our clothing and timber for construction and fuel. Even so, we are all increasingly becoming aware that soils around the world are being threatened today by poor management and short-termism, resulting in compaction, contamination, erosion and salinization, together with loss of fertility, organic matter and biodiversity. In surveys conducted between 2002 and 2011 in south-west England alone (where our programme was largely based), 38% of soils were found to be significantly degraded, leading to increased run-off and serious consequences for the wider environment.

The linking of the words ‘soil’ and ‘culture’ may seem strange, but it should be remembered that the word ‘culture’ was originally used in the ‘agri-cultural’ sense, and it was only from the 16th century that it increasingly came to be used figuratively; as the soil was improved by good husbandry, so the mind was improved by education and the arts. Perhaps it is now time for the arts and education to help put culture back into the soil?

Graham Harvey noted in his 1997 book ‘The Killing of the Countryside:’ “it remains the sobering fact that even in the age of global communications and the Internet, civilisation continues to depend on a few inches of topsoil for its very existence.” Indeed, the Soil Culture programme has its origins in conversations over a decade ago with Graham when I was curating an art exhibition on the history of British livestock farming in the aftermath of the last foot-and-mouth epidemic; in particular, on the damaging effects of insecticides and nitrogen fertilizers on the environment which were increasingly being noticed in the 1960s.

The programme developed in earnest when, in early 2013, we entered into a partnership with Falmouth University, which secured support for a period of research from the Arts and Humanities Research Council. Serendipitously, the United Nations proclaimed 2015 to be ‘the International Year of Soils.’ The research phase culminated in a forum in Falmouth in July 2014 that brought together over 90 artists, writers, environmentalists and others.

The second phase of Soil Culture from August 2014 to August 2015 was funded through partnership working and grants from Arts Council England, the Heritage Lottery Fund, British Society of Soil Science and South West Water. It involved us supporting 12 artist residencies across the south-west of England and at the Royal Botanic Gardens, Kew (Figure 1), together with a commission for a roof garden for a new Primary School in Bristol. Nine of the residencies were selected from an open submission, attracting 655 applications from 39 different countries; a strong indication of the increasing number of artists becoming engaged with environmental issues. 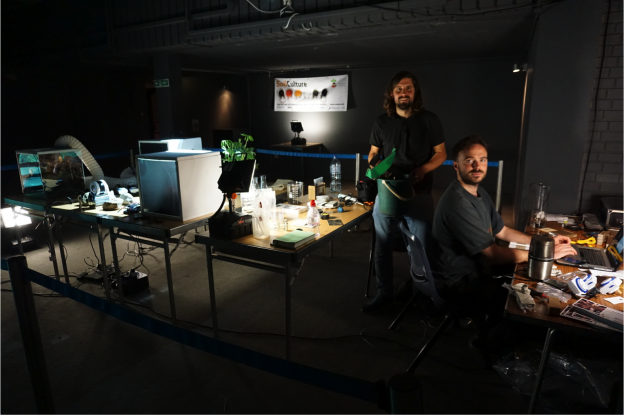 The residencies were held in a wide range of organisations from the Eden Project in mid-Cornwall and the University of Exeter’s Environment and Sustainability Institute in Penryn (Figure 2) to the new Hauser & Wirth Arts Centre in Somerset and Daylesford Organic Farm in Gloucestershire. Each host sets a different brief for the artist, but all offered dedicated time for experimentation and the development of new work, and unparalleled access to facilities and expertise. The briefs were distinct and wide-ranging. They involved invitations to explore the role of soil in carbon sequestration, peat in national parks in the region, the production of soil, and soil from holistic and ecological perspectives. 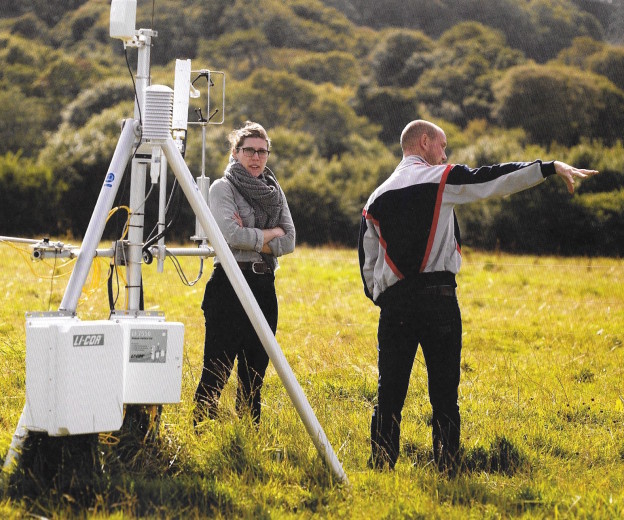 The outcomes of the residencies/commission were brought together in an exhibition ‘Young Shoots,’ which was launched over the summer of 2015 at ‘Create,’ Bristol’s flagship environmental centre, during the City’s year as European Green Capital. This exhibition toured around South West England until June 2016. We also exhibited ‘Dirt Dialogues,’ curated by Dr Alexandra Toland and first shown at the World Soil Congress in Korea in 2014. Another arts/environment organisation, ‘Touchstone Collaborations,’ co-ordinated a series of soil-inspired activities over eight ‘Soil Saturdays,’ which successfully engaged visitors with soil scientists, local allotment holders, organic and biodynamic farmers, market gardeners and community food-growing projects.

‘Deep Roots,’ a second exhibition of work by several  established international artists whose work has engaged with soils, sometimes over several decades, was shown  at Falmouth Art Gallery in the autumn of 2015 and again at Peninsula Arts, Plymouth University at the start of the following year. This  included work by Mel Chin, whose artwork uses special hyper-accumulator plants to extract heavy metals from contaminated land (Figure 3), and Claire Pentecost, whose work includes refashioning soil into the shapes of gold ingots, a reflection of its true worth (Figure 4). Claire says: “my soil ingots propose a new system of value based on living soil, a form of currency that anyone can create by composting.” 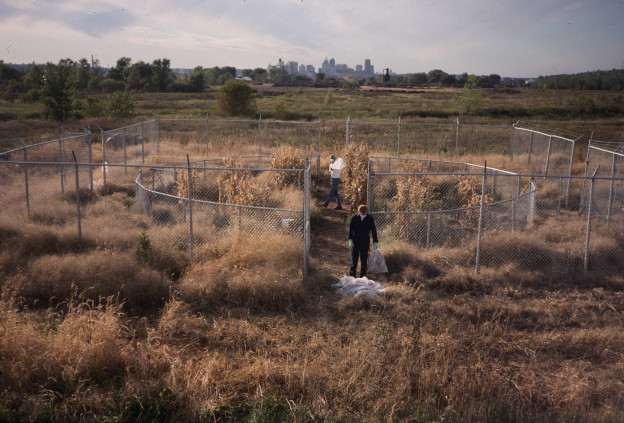 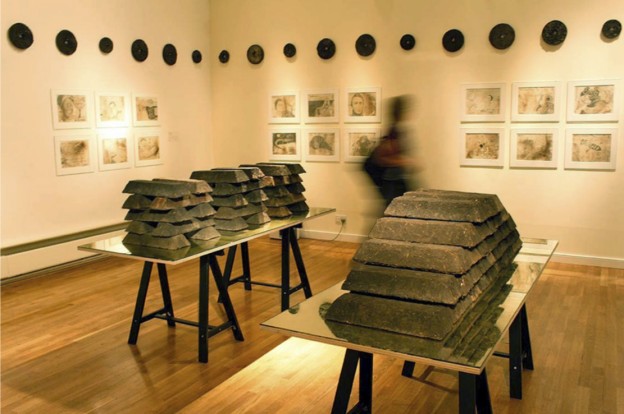 Both exhibitions were accompanied by a range of other participatory activities. During The Dartington Food Fair in Devon in May 2015, landscape architect Charlotte Rathbone ran a ‘Tasting the Place’ workshop inspired by the work of Californian artist Laura Parker, connecting the ‘taste’ of local soils with local wines and cheeses. Artist Peter Ward ran a workshop using earth pigments. He explains: “the adoption of earth pigments in my work has allowed me to celebrate that which inspires my existence – Nature itself.”

Of course, we were delighted when the United Nations designated 2015 as the International Year of Soils (IYS), and pleased that Soil Culture was accepted as part of the official programme. However, against the expectation of the UN that governments of participating countries would support IYS contributions, Britain’s Department for Environment, Food and Rural Affairs (Defra) refused any funding that could have supported the Soil Culture programme and the raising of public awareness of the plight of our soils. We found this surprising because, as early as 2005, Defra’s audit of soils-related education and awareness found that existing provision was hard to find and interpret. Although it indicated that exhibitions provided an excellent form of learning, it noted that no museum had produced one on the subject since 1984. Perhaps this lack of support was consistent with the role that the UK coalition government and farming unions played in 2014 over the wrecking of the European Soil Framework Directive, an initiative that aimed to give our soils the same protection as air and water?

As the International Year of Soils ended, I could not fail to be disappointed by its achievements in the UK. The United Nations itself never seemed to have had the resources to support IYS and the UK’s Environment Agency and Natural England both seem to have largely ignored the opportunities it might have presented. Given more adequate resources, IYS and Soil Culture might have attracted far greater media attention than they have which, in turn, would have boosted public awareness to a far greater extent.

Perhaps it was too much to ask, too soon? Nevertheless, we can now start to plan how the arts might contribute to the next World Soil Congress in Glasgow in 2022.

In May, I have been invited to an UNESCO International Workshop in Venice to speak on how artists address the challenges that face our waters today and will take this opportunity to launch CCANW’s new international ‘Water Culture’ programme.

This workshop ‘Towards a Global Network of Water Museums’ brings together directors/representatives from Water Museums and Interpretation Centres  around the world and has been organised by UNESCO’s International Hydrological Programme. The new Network’s aim is to increase their potential to work together and to increase their impact on policy makers, stakeholders, researchers, educators and the public at large.

When creating their exhibitions and activities, Water Museums are increasingly calling for interdisciplinary approaches to the world water crisis; which includes a lack of clean drinking water and desertification, flooding and rising sea levels, to plastic pollution in our oceans. These, and many other environmental issues, are already being addressed by artists and CCANW’s aim is to create many new opportunities for artists in the future.

Some artists, such as Amy Sharrocks from the UK, have already created their own ‘Museum of Water’; a collection of publicly donated water and accompanying stories accumulated over two years in different sites worldwide. Amy currently has over 700 bottles in the collection, ranging from water from a holy river in India, a burst water main, ice from a Sussex field, to a melted snowman. Her touring Museum was previously shown in London and nominated for European Museum of the Year in 2016. 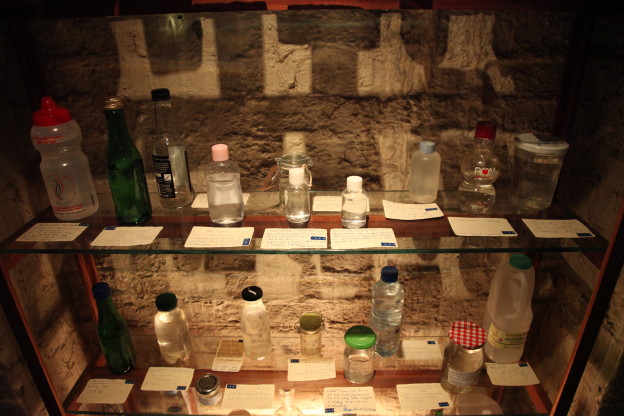 There are plenty of other examples of how artists have engaged with different issues. These include rising sea levels in ‘Greenhouse Britain’ by the Harrison Studio, excessive water extraction in projects along the Rio Grande by Basia Irland,  safe drinking water in the ‘Water Box’ project by  Ichi Ikeda, to water pollution in Chris Jordan’s photographs of affected seabirds.

‘Water Culture’ is just one of many new programmes that have been under development by CCANW since moving to the Dartington Hall Estate in Devon to join the new family of art and ecology organisations which include art.earth (artdotearth.org) and Research in Art, Nature and the Environment (rane-research.org). 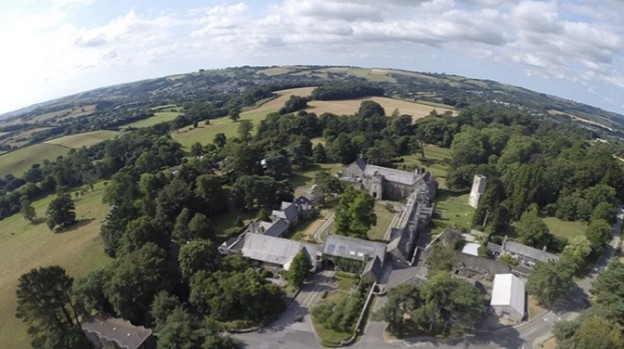 Clive Adams’ career has spanned over 40 years, starting at Arnolfini/Bristol where he curated some of the first exhibitions of land/environmental artists such as Richard Long, Jan Dibbets and David Nash, and he went on to develop the early career of Andy Goldsworthy. He launched CCANW in a Project Space in the Haldon Forest near Exeter in 2006.

‘Soil Culture,’ a 120 page full colour book which encompasses all aspects of the programme, can be purchased at artdotearth.org, price £15+postage. It includes a foreword by Patrick Holden, essays by Bruce Lascelles and Daro Montag, together with a full catalogue of exhibitions and documentation of research and activities.

Clive Adams is the Founding director of the Centre for Contemporary Art and the Natural World (CCANW). His career has spanned over 40 years, starting at Arnolfini/Bristol where he curated some of the first exhibitions of land/environmental artists such as Richard Long, Jan Dibbets and David Nash, and he went on to develop the early career of Andy Goldsworthy. He launched CCANW in a Project Space in the Haldon Forest near Exeter in 2006. View all posts with Clive Adams →