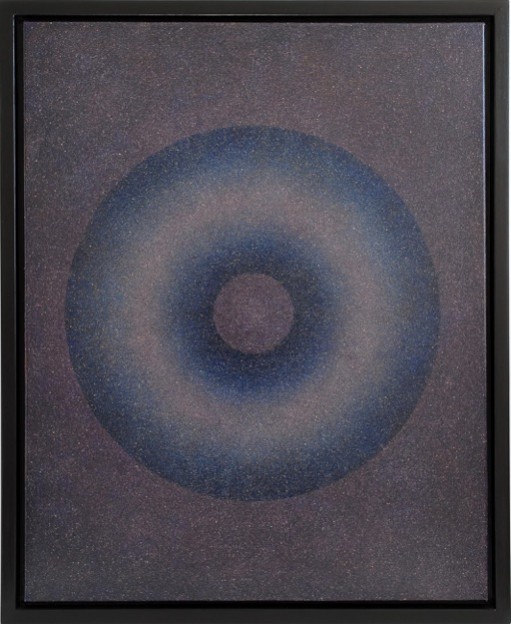 Martin Hewer: In the 1950s my father worked for the British Council abroad and I was sent to various boarding schools in the West Country where I was useless at everything. But I looked forward to Art classes, I was fascinated by the materials because I could mix different colours. In spite of failing all exams I seemed to win the Art prize every year and spent my free time building gliders and other planes. Flight was a wonderful escape from interminable boredom.

During my holidays in Vienna with my parents I saw different kinds on Art. There was the Kunsthistorisches Museum as well as the new Viennese School of painters who were prominent at that time. I remember the paintings of Pieter Brueghel, Friedensriech Hundertwasser and Erich Brauer.

At the age of 14 I decided to dedicate my life to painting. After further disasters at school I left and attended a Foundation Course in Art where at last things started to happen and I had an exhibition of paintings and relief combines. I sold my first painting to a tutor!  At Wimbledon School of Art, my studies included the figure drawing, painting and sculpture. One term I built an experimental sound and light installation which turned sound into different colours as well as other things such as working with prisms, projectors, mercury and standing waves. I left Wimbledon in 1971 but stayed on for an advanced course in print making.

In 1973 I won a scholarship to study Indian miniature painting in Baroda, India.  This was an adventure into a different world of culture and metaphysics which seemed to eclipse any prior understanding.

While visiting my parents who had moved to Hungary by then I met Lazlo Gyemant a prominent Hungarian painter. We became friends and apart from arranging an exhibition of my work I began to study the mixed technique of painting. This was later followed up in 1977 when I attended the Fuchs Academy in Austria. After which I taught Art at Saffron Walden College where I ran a Foundation Course.

RB: Your work is included in the exhibition Sci-Art Synergy, at the RUH, Bath. What do you understand by the term ‘sci-art synergy’ and how does your artwork reflect this?

MH: The relationship between science and art in western culture goes back to the Renaissance when there was less of a distinction between the two. The synergy part is the process of mutual investigation which could also be called creativity.

One of my paintings is called “Coming or going?” The viewer is posed this question and many have remarked about its unusual effect which surprised them. 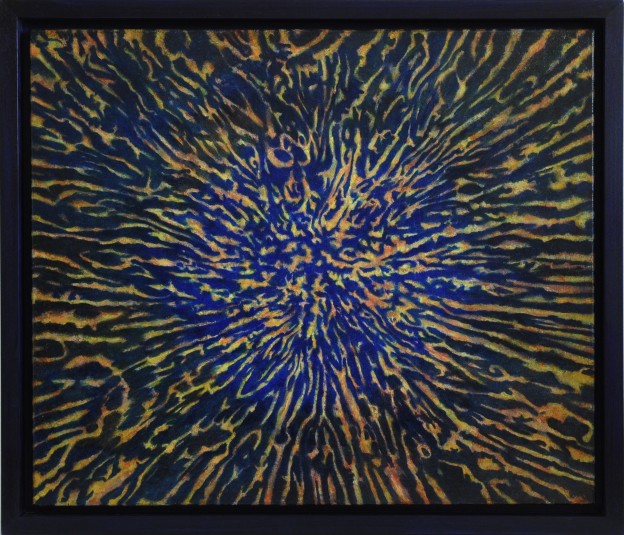 RB: Can you say something about your ‘Cosmology’ themed artworks?

MH: “Cosmology” for me is an awe inspiring word that encompasses everything in an expanding universe.  As a painter one can’t help feeling very small like an astronomer might feel looking through a telescope.  From a painter’s view point I have been interested in abstraction and exploration and trying to imagine other worlds and what they might look like. 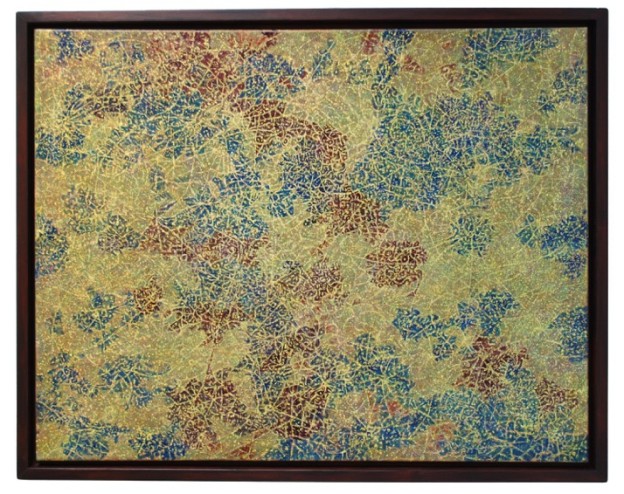 I seem to have arrived at this through studying the representational world (of objects such as landscape and the human figure). Cosmology is the pure abstraction of the unknown and infinite space.  Interesting things take place when one takes a risk and opens the invisible door between the self and the unknown. One finds that strange things happen, this is the arena the painter is concerned with.

The work is a record of this encounter as I journey through space time. 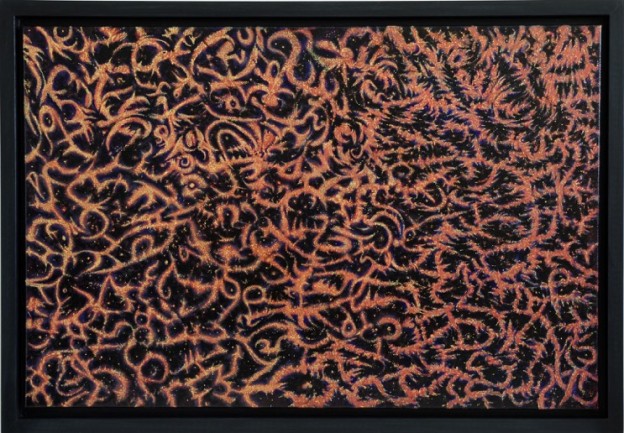 RB: You have stated that you use “traditional painting materials to explore the cosmos”. Can you say something more about this approach?

MH: I employ traditional painting materials because they are well proven in terms of reliability and brilliance.  Pigments of purity and permanence are well displayed by the great masters whose works have stood the test of time.

So I am free to concentrate on other problems of painting.

I like the contrast of using relatively low tech materials in modern space time where ideas are at the cutting edge of contemporary exploration.

Painting is essentially chemistry and physics representing an image to the viewer.

The image is a mixture of particles frozen in a medium of the present.

Also, the image is able to exist in its own reality independent of energy, it only needs light to manifest itself.

When there is no light the image becomes latent but still exists in space time. 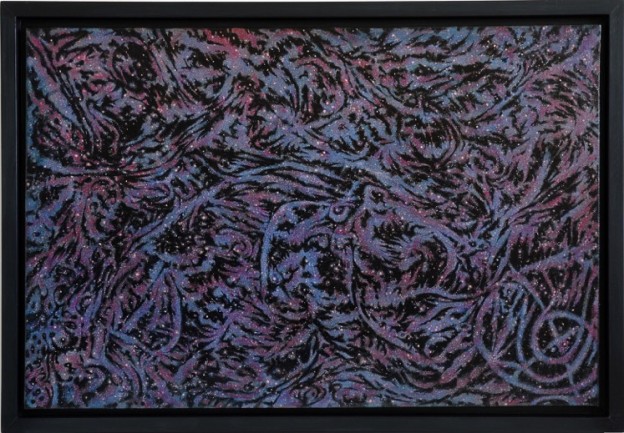 RB: Do you have any specific examples where scientific thinking have helped to guide your artistic explorations? And vice versa?

MH: I think any meaningful enquiry process does probe and question our perceptions.  It appears that things are not always what they seem and what we know may not relate to an object but merely what we think or would like to believe.

The creative process does break down one’s own ideas about what we are looking at.

What is it? And what is a thing? And how it has come to be? And our relation to it? Does break through our preconceived ideas about existence.

These are some of the questions that confront the artist. 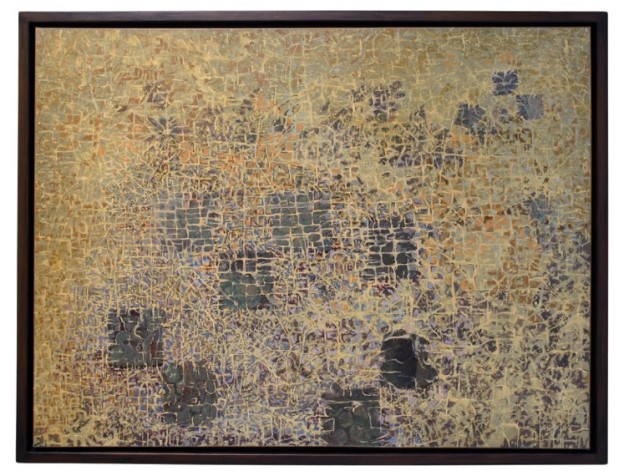 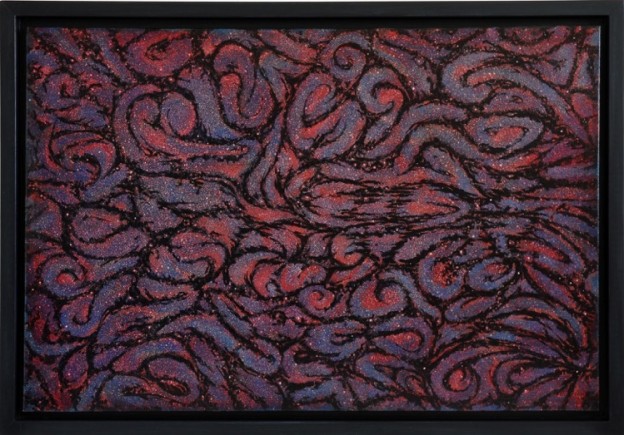 For example, my finite time here falls into infinite space time.  A sobering thought that throws me into a cosmic awareness that I am insignificant but maybe the ideas that I attempt to grapple with could shed some light upon what is achievable during finite time.

When the hand of the artist mixes the particles of pigment that change into some unknown form then one experiences the event horizon in personal way. Things are happening in an immediate and intense way.

The artist’s story is a report or dialogue of what has been encountered along space time.

We only see the remains or the leftovers as much of what happens fails to take on any discernible form or image.

We are left with fragments and ruins of the past which archeology uncovers and postulates lost wonders and knowledge.

This is something we are unaware of as time is speeding up and with the expansion of the cosmos we may miss the directions the human species needs for survival.

If any idea can raise sufficient awareness to make a  difference to our understanding and destiny then the gauntlet has been thrown down to the artist who accepts the this looming challenge.  Not wanting to sound pretentious but I would hope that my artistic explorations are a form of scientific inquiry. 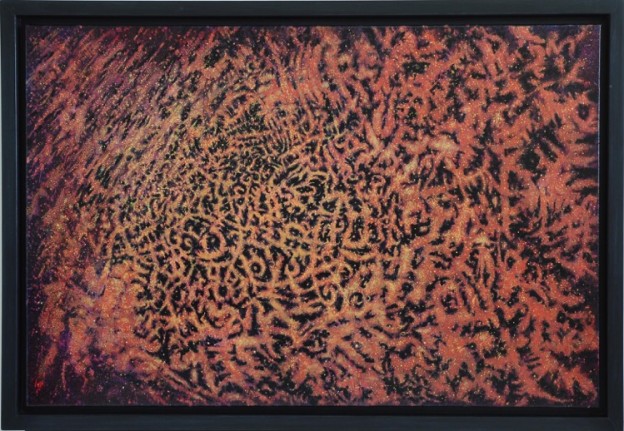 MH: The collaboration between the arts and sciences has the potential to create new knowledge and ideas because people will approach problem solving from different perspectives.

This can only be a positive thing as the more diverse input the greater the chances of discovering new ideas. It is these ideas that could give birth to the creation of technology as everything starts from an idea. 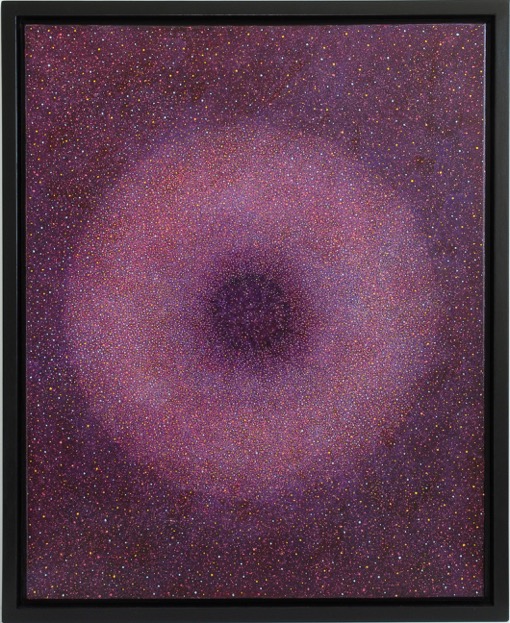 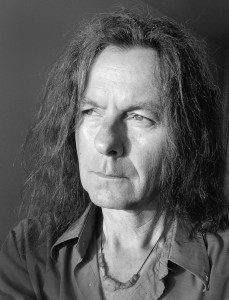 As my father worked for the British Council I have had an unusual background, having been born abroad and with a childhood in East Africa life has been outside the general norm of English convention.

Early impressions of bright colours and tropical climate have contrasted to English weather.

An unhappy schooling in the west country led me to escape into making things such as gliders and painting.

Life took on more of a purpose when I attended a foundation course in art and design. At last I seemed to be able to find a direction of enquiry. Later at art college I experimented with different media and enjoyed some success exhibiting paintings and prints in London.

In 1973 I won a scholarship to study for an MA in Indian miniature at Baroda University in India. Later I attended the Fuchs Academy in Austria where I studied the old masters mixed technique. Throughout this time I exhibited work in the UK and abroad.

Over the years the work has evolved along a more abstract direction. This has led me to think about creating work representing cosmological themes and ideas.

In this exhibition there are works such as “Coming or going”, “Creation and destruction”, “Origin”and “Cosmic trails”.

The largest work “Map of ruins” is about the archaeology of fragments in space time that is all we are left with as mementos of earthly existence.